The Tales Untold: The Not-So-Happy Birthday

Harry Potter has lost so much, and while these losses shouldn’t ever be compared, it can be disappointing when there’s a lack of emphasis on his grief for his parents.

And so, in this installment of The Tales Untold, one of our writers set out to craft a story of introspection, one of grappling with pain and loss, and just how tragic the fall of the Potters was. 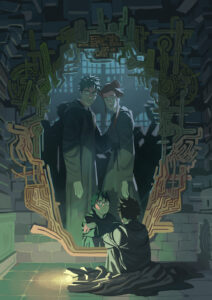 It wasn’t hidden knowledge that Harry James Potter bore an uncanny resemblance with his father. In fact, most who knew the daring mischief-maker would always begin their conversation with The Boy Who Lived with that very statement – going on to say that they could’ve passed for twins if not for his striking emerald eyes.

Harry’s lips would always tilt upwards whenever someone brought it up, but his eyes – they never shined quite as bright as they once did, never glittered with happiness as the day he first heard the sentiment. Perhaps it was because it was always what they talked about, never telling him about how he acted like them (Harry would sometimes think that it was precisely because he didn’t act like them, but he would always banish those thoughts), or perhaps it was because some would try to gain his favor by mentioning James and Lily.

And perhaps those who knew Harry could feel this thought wash over him, as though rubbing salt in the wound, so most stopped mentioning it. The few who continued to bring up the subject would only do so sparingly, and that was fine, Harry thought.

At least until Harry’s twenty-fifth birthday.

There were large festivities for his birthday, and most of the guests were people he genuinely enjoyed the company of. Hermione and Ron were off talking to some of their colleagues, Hagrid and Charlie were having an animated conversation about dragons (and Harry could’ve sworn that, as he passed by them, he heard Charlie asking if he could take one to Hagrid’s hut), and Luna was explaining what a Wrackspurt was to a confused but interested Blaise.

Harry, having just entertained some of his own coworkers, plopped himself down and sipped on his firewhisky. He sighed in relief as he felt the familiar burn at the back of his throat, and just as he was about to drink more, he heard someone walking toward him.

“I would’ve thought you’d be with Weasley and Granger, Potter.”

Blinking in surprise, the young wizard placed the bottle onto the table and looked up at the familiar voice. “Professor McGonagall, I didn’t see you there.”

McGonagall’s lips twitched at Harry’s dumbfounded expression, and she reached over and placed a box on his table. It was small and covered in a dark velvet wrap, with tiny Golden Snitches fluttering about.

His eyes widened, and her former student opened his mouth, a refusal on his lips when she stared pointedly at him.

“Just like James,” she said quietly, her eyes softening. At Harry’s questioning glance, she continued. “He always tried to refuse my gifts, but I never let him.”

When Harry opened his mouth again, McGonagall sighed. “No, Potter, you’ll have the same treatment as your father.”

Harry opened his mouth but thought better of it when he saw the Headmistress’ weary expression. Smiling sheepishly, he rubbed the back of his neck and carefully took the gift in his hands.

“Thank you, professor,” he murmured, fingers gingerly trailing after the moving Snitches.

She turned and nearly walked away when she paused. Facing Harry, the corner of her eyes crinkled as she smiled. “You look exactly like how I imagined James would look.”

Harry’s eyes widened slightly, and he froze, his hands tightening their hold on the gift.

McGonagall had just turned and moved to Flitwick when Harry quickly placed the gift on the table and brought the bottle of firewhisky back to his lips. Shakily, he took a sip and cursed when some of his drink spilled.

Clumsily placing the bottle back on the table, he brought out his wand and cast a quick Scourgify. Taking one last glance at his table, he hesitated for a moment before he stood up, taking the gift with him, and quickly found his way to the garden and Apparated home.

The doors opened with a bang, and the walls trembled just as much as Harry did. Breathing heavily, he sped past the halls and went into his room.

He forcefully tugged his tie off, gasping when the offending fabric fell listlessly to the floor. Harry sat on the edge of his bed, ignoring the creaking protests of the wooden frame, and let out a ragged breath.

Dragging his hands over his face, he bit his lip and sighed.

He shut his eyes and took a slow breath.

“You look exactly like how I imagined James would be.”

He thought that nothing could hurt more than how people said they looked alike.

Oh, how wrong he was.