Madly, Deeply: The Diaries of Alan Rickman is being published later this month, featuring entries written by the actor himself, who is known well to fans of the wizarding world for playing Severus Snape in the Harry Potter film franchise. Those narrating the audiobook version include some of his fellow Potter costars.

Alfred Enoch (Dean Thomas) and Bonnie Wright (Ginny Weasley) are lending their voices to the audiobook alongside Rickman’s wife, Rima Horton, and his close friend Steven Crossley. The foreword will be read by another Potter actor, Dame Emma Thompson (Sybill Trelawney), who starred alongside Rickman in other films, including Love Actually and Sense and Sensibility. 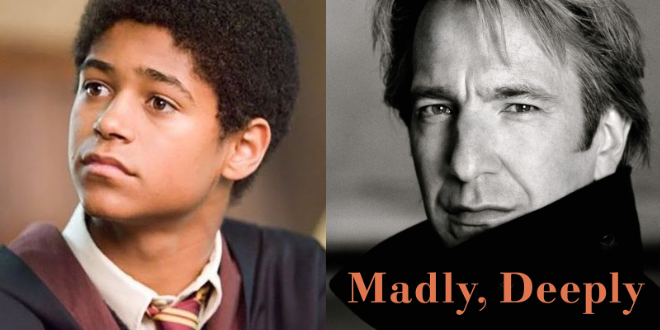 Alfred Enoch worked as a narrator for the audiobook of “Madly, Deeply: The Diaries of Alan Rickman.”

The book is being released on October 18 and features “volumes of diary entries written by the late actor running from 1993 to his death in 2016.” Within the book, Rickman details his life and career. Henry Holt and Co. describes the upcoming book as “like listening to Rickman chatting to a close companion.”

Meet Rickman the consummate professional actor, but also the friend, the traveler, the fan, the director, the enthusiast; in short, the man beyond the icon.

The book features Rickman’s thoughts on the Harry Potter series, including how he pondered not continuing to play the role of Severus Snape, alongside many other opinions about the franchise.

The Hollywood Reporter has shared an audiobook excerpt narrated by Enoch, which can be listened to and read online. Enoch discusses Rickman’s early film encounters, how he met his future wife, and his role in the Harry Potter films.

The first decade of the new century was devoted largely to the Harry Potter series of eight films. He played Severus Snape, the famously grumpy professor with a ready wit, a part with which he became synonymous, and which reduced considerably the average age of his burgeoning fan base.

Will you be getting your hands on a copy of Madly, Deeply: The Diaries of Alan Rickman when it is released later this month?