It is a sad day for the Potter fandom, as Hagrid actor Robbie Coltrane has passed away at the age of 72. This feeling of sadness is one Potter fans are, unfortunately, familiar with, as many of the Harry Potter cast members have passed away over the years. Robbie is, in fact, the 30th cast member from the franchise to pass.

While the fandom is mourning a man and actor we have fallen in love with on-screen, the cast and crew members of the franchise have lost a dear friend and colleague. Here is what they’ve had to say.

Radcliffe made a statement via Deadline:

Robbie was one of the funniest people I’ve met and used to keep us laughing constantly as kids on the set. I’ve especially fond memories of him keeping our spirits up on ‘Prisoner of Azkaban,’ when we were all hiding from the torrential rain for hours in Hagrid’s hut and he was telling stories and cracking jokes to keep morale up. I feel incredibly lucky that I got to meet and work with him and very sad that he’s passed. He was an incredible actor and a lovely man. 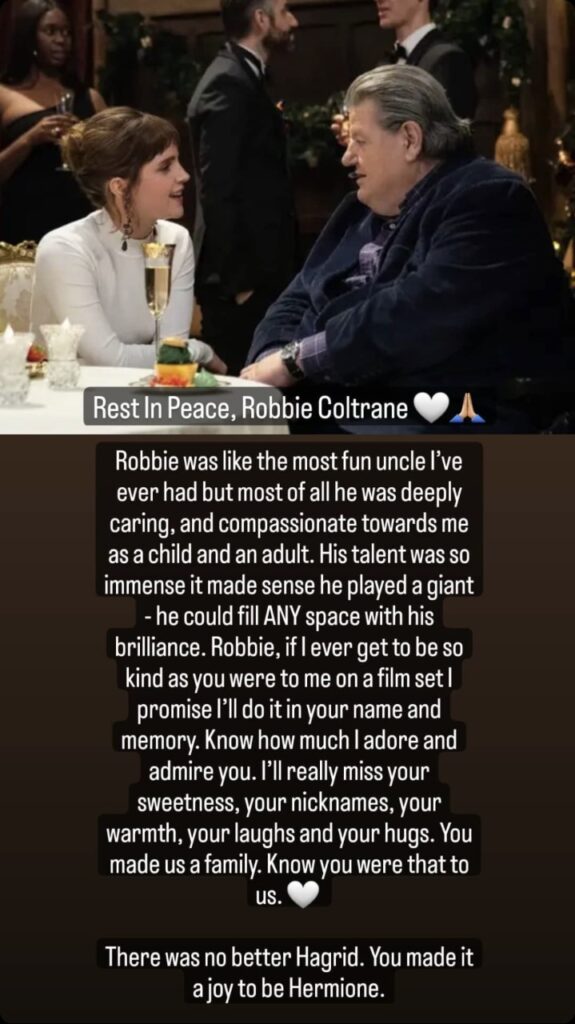 Robbie. Bobser. He called me Space Boy. We shared a love of the final frontier. He didn’t give a fuck and it always made you smile. A giant, in more ways than one. We had some times x

I will miss the random chats about all subjects under the sun.And I'll never forget in September 2000, Robbie Coltrane came over to a very nervous 14yr old me on my 1st ever day on a movie set and said "Enjoy it, you'll be great". Thank you for that x

November 2001 – Leicester Square, London. "Soak this in lads, its like a Rolls-Royce for your first car"! Robbie Coleraine when he was next to me on the red carpet of the first HP premiere. Over the years we had some great chats about history and travel. Rest in peace Robbie x

As @melissaanelli and I finished up the opening of @LeakyCon in Denver we came off stage to the news that Robbie Coltrane has died. A lovely man full of humour and good will and incredible talent xx

So so sad. Hugs to all our Potter family tonight. 🤍🕊

Being extremely silly with Robbie on the telly. RIP Uncle Bob. ❤️ pic.twitter.com/cRmHCVotfk

I was saddened to learn that fellow #HarryPotter cast member, Robbie Coltrane died today. Always jovial, he brought warmth, light and laughter to any set he walked on to. RIP Robbie, Beloved Giant of comedy.x pic.twitter.com/NGT644dA7K

Deeply saddened to learn that Robbie Coltrane has died.
A lovely, lovely man, and a wonderful actor. My words don't do him anywhere near justice.

First met Robbie Coltrane in hair & makeup and was crazily starstruck (Hagrid!!!) Saw him filming months later – he remembered my name and was delighted to stop and chat. Also his performance in #NationalTreasure was brilliant. Rest in Peace. pic.twitter.com/vdMl40Vc4C

RIP Robbie Coltrane. He was always nice to me

I first met Robbie Coltrane almost exactly 40 years ago. I was awe/terror/love struck all at the same time. Such depth, power & talent: funny enough to cause helpless hiccups & honking as we made our first TV show, “Alfresco”. Farewell, old fellow. You’ll be so dreadfully missed

He never played on his status, he’d delight in talking to anyone. When my parents went to the set of National Treasure, a bit awestruck by it all, Robbie practically gave them a tour. He was beautiful.