What Exactly Are the Ethics of Potions?

Throughout the entirety of the series, we’ve seen loads of examples of magic going into the vast expanse of moral ambiguity, and the greatest offender is potions. With potions like Polyjuice that allow you to physically take someone’s identity and Blood-Replenishing Potion that’s crucial for some to survive, it honestly seems like there’s no way to tell whether potions fall into the archetypal categories of good and bad.

And that’s the thing — there isn’t really a way to tell, most especially with potion-making’s ethics, which some would call questionable.

What can be told, however, is that potions and their principles rely a lot on one thing: the potion-maker’s intent.

We love making ourselves go mad with the murky waters of potions and morality. So sit back, grab a butterbeer (or firewhisky, we aren’t picky), and enjoy this decaffeinated analysis of potions, the cruciality of intent, and what — if anything — counts as a crime of potions. 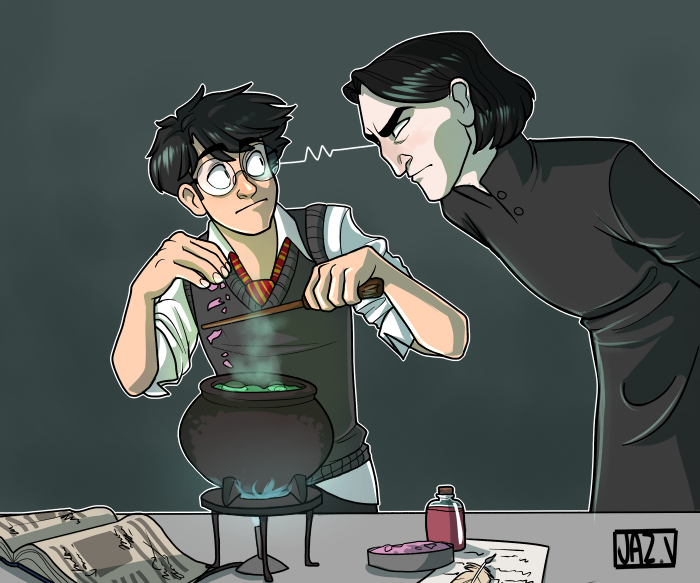 Potions is an art; a fickle, incredibly difficult to master, and bloody infuriating art, but one that grants its master… well, practically anything you put your mind to.

I can teach you how to bottle fame, brew glory, even stopper death.” (SS 137)

With proper care and instruction, one can do exactly what potions extraordinaire Severus Snape says. It sounds ridiculous, yes, but that couldn’t be further from the truth, as evidenced by the myriad of potions we’ve seen throughout the books — and that’s what makes the subject so great and dangerous.

Sure, potions have proven time and time again how vital they are in the wizarding world, particularly in the medical field. Thanks to concoctions like Skele-Gro, Essence of Dittany, Mandrake Restorative Draught, and Wolfsbane (just to name a few), witches and wizards don’t have to worry all too much about injuries or diseases, because potions can make it as though bodily and autoimmune functions are dialed up a hundredfold. But if someone were to, for instance, administer them with ill wishes — well, the picture isn’t pretty.

That’s the thing: Potions, ideally, make it so that life is infinitely easier to keep and nurture. But their effects on vitality don’t equate to them being inherently ethical, because while these potions were created to help people, a witch or wizard’s intent matters immensely.

A potion is just there. It isn’t sentient; it doesn’t have a mind to think about its purpose and what it’s going to do to people. It simply exists. Potions, in and of themselves, can’t be considered ethical or unethical because a potion doesn’t do anything; it just waits to be brewed and used.

Potion-making, on the other hand, is something that can be categorized as either ethical or unethical, especially considering that in the creation of a potion, the witch or wizard’s desired outcome is key.

Before we get to that, let’s talk about the thing that potions stem from — their ingredients. The ethics of this particular aspect is the easiest to call into question, really. After all, the sole question that needs to be asked is how they’re sourced, and you can already tell if it’s good or not. If the ingredients are taken without harming anything, then it’s ethical. If, on the other hand, they’re taken from an endangered species or hurt the creatures, then it isn’t ethical.

But what if the reason for brewing a potion — specifically one with unethically-sourced ingredients — is something that proves to be for the greater good? What if the benefits outweigh the awful cost? What if it’s something that requires a few measly ingredients that are taken in a horrid manner, but it ends up saving loads of lives?

It’s still unethical — the sourcing, at least — but the usage of the potion is justified, to an extent. Again, it boils down to intent.

What does the witch or wizard in question plan to brew a potion for? Is it something entirely selfish, or is it a purely selfless pursuit? Is Polyjuice going to be used to help find evidence to gain justice, or is it to help in committing the crime of identity theft?

The thing is, no matter how many arguments one makes for or against certain potions or the art as a whole, it doesn’t matter. Potion-making in and of itself is not a crime, and its ethics, along with human decency, are intact. What truly matters is how the potion is intended to be used.

Perhaps it’s a rather unethical ethic, but it is the whole irrefutable truth.

(This doesn’t apply to Amortentia, though. That potion’s recipe deserves to be burned.)