Voldemort Is Not Delphi’s Father

As many will tell you, there are quite a few things wrong with the plot of Harry Potter and the Cursed Child. Although the play seems to be spectacular, the story does present some issues. One of those main issues is to do with the Dark Lord himself. The text leads us to believe that He Who Must Not Be Named wanted his legacy passed on if he were ever to die. We don’t know about you, but this does not seem to be something the Voldy we know would do. However, there is no need to panic. If this theory is correct, then Voldemort is not Delphi’s father, and all truly is well.

First of all, let’s look at Delphi’s claim that she is Voldemort’s daughter. The proof she holds is practically meaningless. She can speak Parseltongue, claiming that her father passed the trait down to her… but Ronald Weasley also learned to speak some Parseltongue by listening to Harry. Dumbledore could understand it perfectly as well. It does not seem to be a genetic thing only.

Another proof is her ability to fly without the need for a broom. Now, this has nothing to do with hereditary traits; in fact, it’s something that Voldemort taught Snape to do. Her claims as Voldemort’s heir are based on the words of one man only: Bellatrix’s husband, Rodolphus Lestrange. 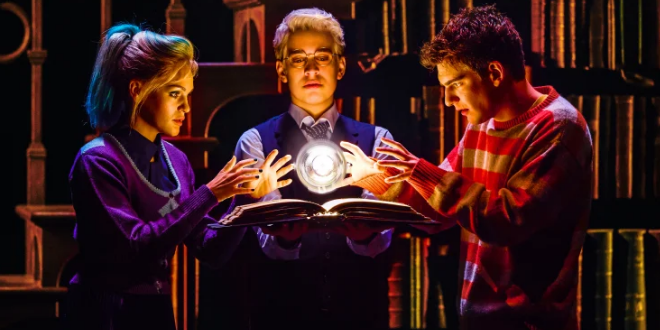 To understand Delphi’s full story, let’s take it all the way back. If we are to believe Cursed Child, Voldemort impregnated Bellatrix so that she would give him an heir. We think a much more believable reality is that Bellatrix simply had a child with Rodolphus. In fact, at the very beginning of Harry Potter and the Half-Blood Prince, Bellatrix argues with her sister:

“You should be proud!” said Bellatrix ruthlessly. “If I had sons, I would be glad to give them up to the service of the Dark Lord!” (HBP 35)

Bellatrix being pregnant during the events of the sixth book could also explain her absence from this tome. Contrary to the movie, the novel never shows Bellatrix burning down the Burrow or even being present at Dumbledore’s death. That last detail seems out of character for her — why wouldn’t she want to participate in what seems to be the most important mission Death Eaters have had yet? Well, she would have a very good reason to miss it if she was giving birth. Dumbledore is often represented by the phoenix, which is reborn from its ashes when it dies. If you remember the details of Cursed Child, you’ll notice that Delphi is also represented by a bird: the Augurey, an Irish phoenix. And so, as the phoenix dies, the Augurey is born.

From then on, Cursed Child tells us that Delphi was given to a mean old witch named Euphemia Rowle to be raised as the battle went on. We all know what happened next: Voldemort and Bellatrix were killed and Rodolphus was sent to Azkaban. Some 19 years later, Rodolphus supposedly got out of the wizard prison and went to see Delphi, telling her that her parents were Bellatrix Lestrange and Lord Voldemort.

Now, why would he do that? If Delphi truly was his child, what would he have to gain from lying to her? Rodolphus is the one who found the prophecy that could bring the Dark Lord back from the dead. If we are to believe this theory, seeing that this prophecy seemed to involve time travel, he might have figured the action could bring his wife back too, since she had died a few minutes prior to Voldemort. So Rodolphus went to collect his child, feeding her all these lies about her father the Dark Lord, and convincing her that it was her destiny to bring him back.

In this article, we’ve talked a lot about Rodolphus Lestrange, but where is he during this whole play? Delphi mentions him, but he never actually makes an appearance. For an answer, we will have to look at the prophecy itself.

When spares are spared, when time is turned, when unseen children murder their fathers, will the Dark Lord return. (CC 233)

Something is wrong here. When unseen children murder their fathers? Yes, Albus accidentally causes the death of Harry, but the prophecy says children, not child. In no alternative timelines does Draco ever die, so Scorpius can’t be the other child. There is one way to solve this, and that’s if Delphi murders Rodolphus. His death would explain his absence from the story. There could be many reasons for her to kill him, but the most interesting would be if Rodolphus decided to tell Delphi the truth. Delphi would have never accepted Rodolphus as her dad over Voldemort. The murder of her biological father would make her the second unseen child and truly complete the prophecy. As we need her to be one of the father-murdering unseen children, Delphi can in no way be Voldemort’s daughter.

What do you think of this theory? Is there another potential progenitor to Delphi? Let us know in the comments.