“Flipendo”: The Story of a Spell into Canon

For as long as we can remember, we have been fascinated by the Knockback Jinx. It has such a silly incantation, and it kept appearing in all the Harry Potter games we played – though not once in any movie or book. Every time it showed up, we had a little sense of pride in recognizing it, as if the Knockback Jinx were our own personal spell that had grown up and started spreading around the Wizarding World. One day, we decided to sit down and track the history of the Knockback Jinx; here is what we learned.

The first appearance of the Knockback Jinx was in 2001 in the Harry Potter and the Sorcerer’s Stone video game. In it, Professor Quirrell teaches Harry this spell in his first Defense Against the Dark Arts lesson. The Knockback Jinx is used to attack enemies and push objects, such as blocks, which Harry can climb to reach higher places. But that was just the beginning. The following year, the Knockback Jinx made it into the Harry Potter Trading Card Game in the Diagon Alley extension pack – it’s clear that the spell had made an impact. From then on, the spell continued to appear in many video games, including the Lego adaptations. 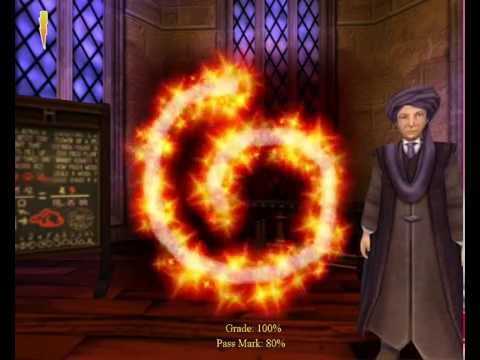 Soon enough, as the spell became more and more popular, a theory started to form in the Potter fandom. Many fans started associating the incantation Flipendo with the Knockback Jinx mentioned in the books. We had never heard the Knockback Jinx’s incantation, and seeing as its effects are the same as the unnamed spell in the video games, who’s to say that they can’t be one and the same? This theory became so popular that even Pottermore indicates that Flipendo is the Knockback Jinx’s incantation on its list of spells. However, the term Flipendo had not yet been used in any official Harry Potter publication… but that was all about to change with the Wizarding World’s expansion into a new medium.

In 2016, Harry Potter and the Cursed Child came out. Of course, the canonicity of this play is still a hotly debated subject among Potterheads, but you can’t deny that it was at least an author-approved story. In a duel between Harry Potter and Draco Malfoy, Flipendo finally reached canon:

HARRY is sent twirling through the air. DRACO laughs.

As of that moment, Flipendo became as official as an incantation could be. It started appearing in more video games, such as Harry Potter: Hogwarts Mystery, where it was identified once more as the Knockback Jinx’s incantation, and in Harry Potter: Wizards Unite, where players used it quite often when battling Confoundables. More and more modern fans, who hadn’t known the spell’s glory age in the early 2000s, got to learn all about the Knockback Jinx through these new games.

Fun fact: Did you know that both times that the Knockback Jinx is used on Harry in the novels, he had just called the caster a coward? The first time is when he confronts Snape, who is running away with the Death Eaters after Dumbledore’s death. The second is during his confrontation with Lupin in Grimmauld Place, when Harry calls him out for wanting to abandon his wife and future child.

So what can we learn from the Knockback Jinx? Well, we learn not to take ourselves too seriously. We learn that we matter, no matter our origins. And most importantly, we learn that sometimes, all we need is a little push.