The Magic of Pre-Movie Art: A Trip Back in Time Through the Harry Potter Trading Card Game

Diagon Alley, number four, Privet Drive, and Gringotts are memorable locations in Harry Potter and the Sorcerer’s Stone. We can all remember the opening line that contributed to our curiosity and love of the books “Mr. and Mrs. Dursley of number four, Privet Drive, were proud to say that they were perfectly normal, thank you very much” (SS 1). We learned that this poor boy, Harry Potter, lived with his miserable Aunt and Uncle until Rubeus Hagrid came to collect him when they were hiding in the hut on the rock. These locations, witches, wizards, and Muggles, are brilliantly crafted in the Harry Potter Trading Card Game (HPTCG) by the many creative artists who worked on these cards years ago.

Many game players will create decks that mimic certain themes from the books, often called tribal or themed decks. These decks usually build on a particular detail or character of the book and form a storyline around it for the game. Additionally, collecting the cards makes for a great way to map out the story when seeing the various spell names and characters chosen. In this article, I am going to list some cards from the HPTCG sets that bring to life the many characters, adventures, locations, and from the Harry Potter storyline. 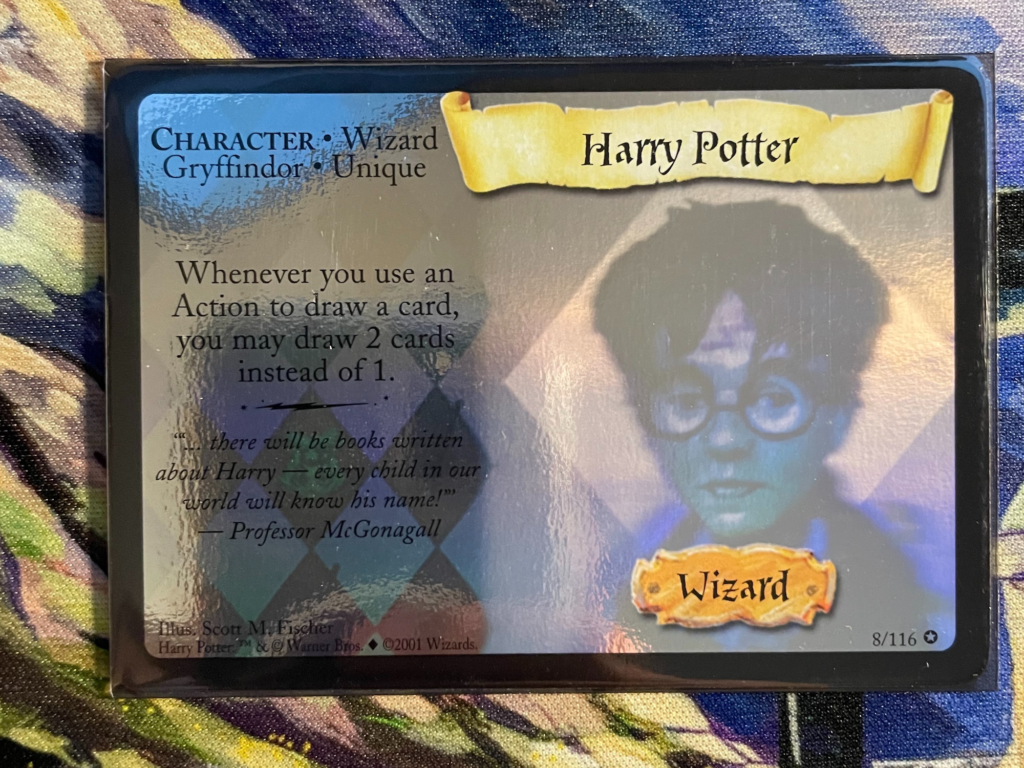 We can start with the boy wizard himself, Harry Potter. From the base set, Harry Potter’s image is first seen in card number 8/116. Harry’s face is pictured as it is introduced to us in the second chapter of the first book, “Harry had a thin face, knobbly knees, black hair, and bright green eyes. He wore round glasses held together with a lot of Scotch tape because of all the times Dudley had punched him on the nose. The only thing Harry liked about his own appearance was a very thin scar on his forehead that was shaped like a bolt of lightning” (SS 20). The dark hair, taped glasses, and lightning scar are very prominent in this image of the boy wizard. 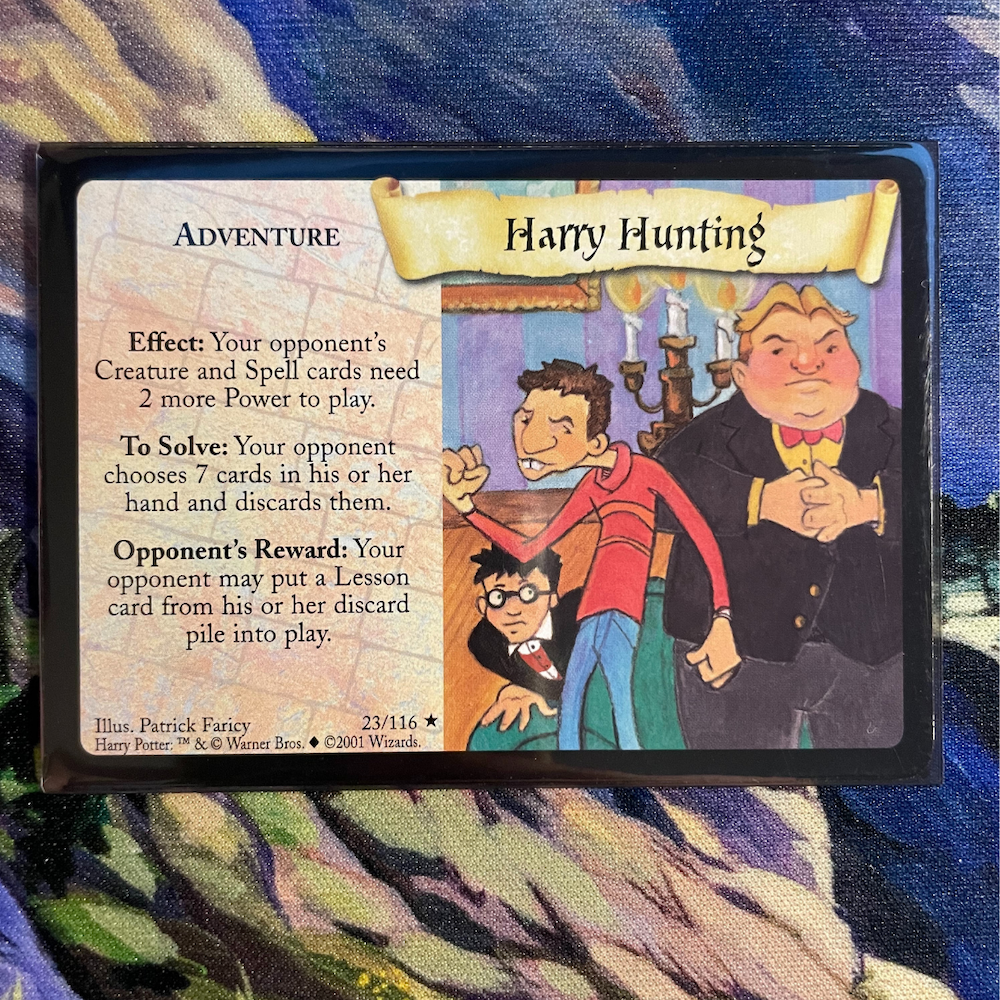 Throughout the game, you can see the descriptions of images from the books are widely respected and stay as true as can be. Harry’s description, as well as Dudley’s and his best friend Piers Polkiss’s, can be seen in Harry Hunting, card number 23/116. Dudley takes up half the image, and Piers, a “scrawny boy with a face like a rat,”  and Harry are drawn to bring their images to life (SS 23). Chapter 2, “The Vanishing Glass,” states that Piers is “usually the one who held peoples arms behind their backs while Dudley hit them” (SS 23). In this card, we can see the details of this full scenario taking place as Dudley is ready to strike, and Harry is tucked away, hiding from them both. 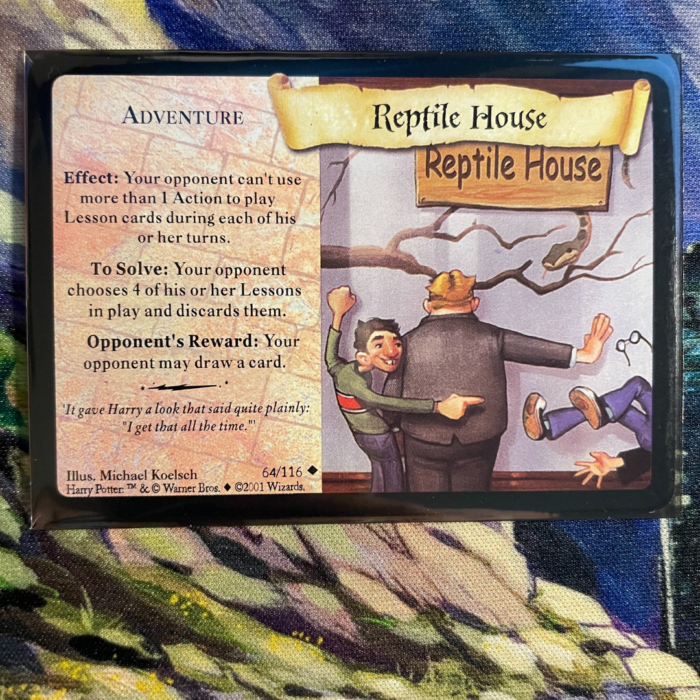 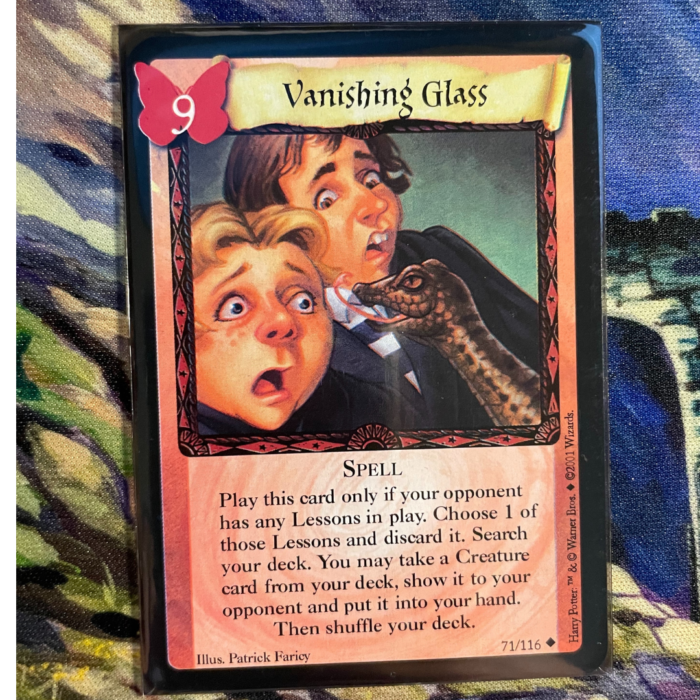 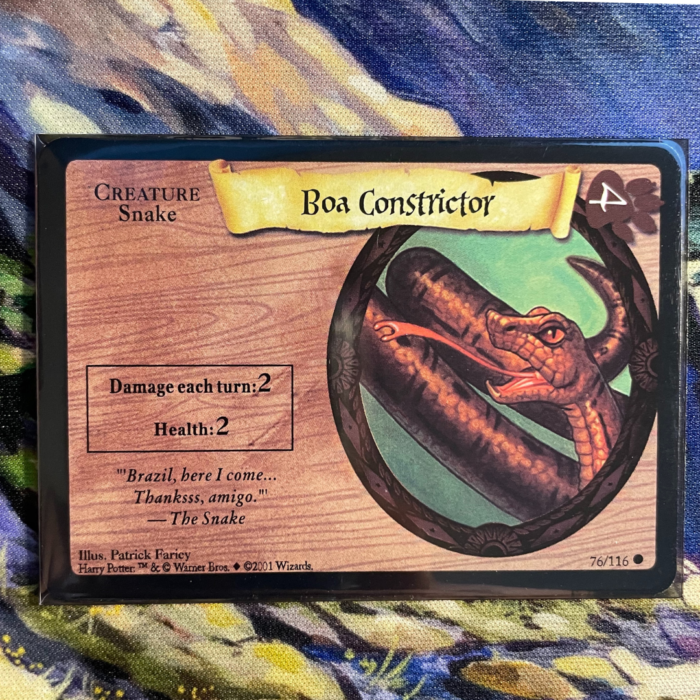 The scenes to follow from this section of the chapter can be seen next in cards “Reptile House” (64/116), “Vanishing Glass” (71/116), and of course the great “Boa Constrictor” (76/116). As we know, this mysterious incident at the zoo with the vanishing glass, along with others, had the Dursleys fearful and acting erratically. One of the scenes that leads to Mr. Dursley forcing everyone to escape to the hut on the rock is the letters from no one. In card 20/80 in the Diagon Alley set, we can see this scene play out as Mr. Dursley’s anger, Mrs. Dursleys fear, and Harry’s anxious outstretched hand are drawn perfectly in this card. The “Hut on the Rock” card, 15/80, in the Adventures at Hogwarts set, is indeed the “most miserable little shack you could imagine” (SS 44). The small shack-like building that sits upon a desolate cliff has waves crashing against the small rock itself in this image. 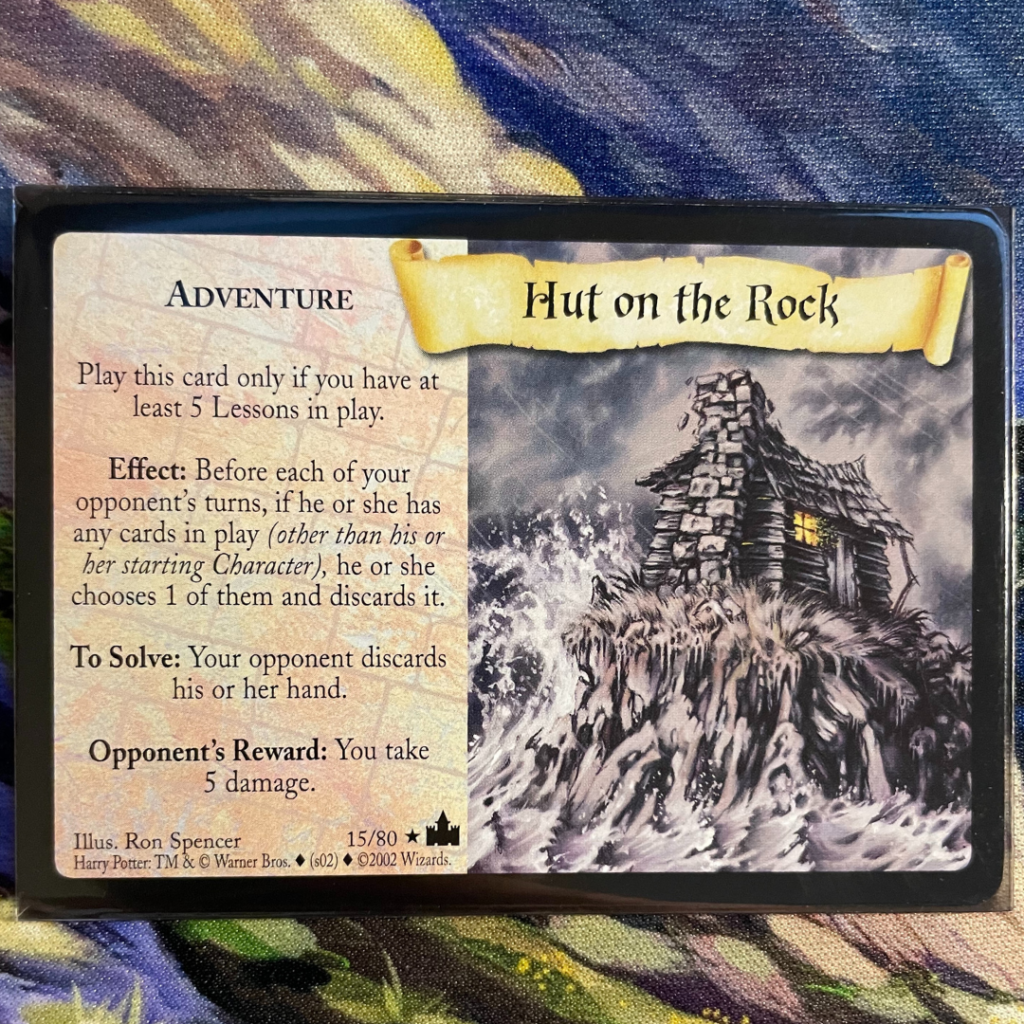 Having such details allows the players to become more involved in the game and recall the storyline. At the bottom of some cards, there are quotes that are provided to help nudge the player’s memory of where these scenes and spells came from. The spell card “Hover Charm” (115/140) from the Harry Potter and the Chamber of Secrets expansion shows Harry standing in fear as Dobby has Aunt Petunia’s colorful dessert floating above his hands. The card’s book quote reads, “Aunt Petunia’s masterpiece of a pudding, the mountain of cream and sugared violets, was floating up near the ceiling”  (CoS 19). These fun additions are a great choice by the card’s creators to show what influenced these scenes. Another example of this can be seen on Professor Pomona Sprout’s character card, which reads, “… there was usually a large amount of earth on her clothes, and her fingernails would have made Aunt Petunia faint” (CoS 89). 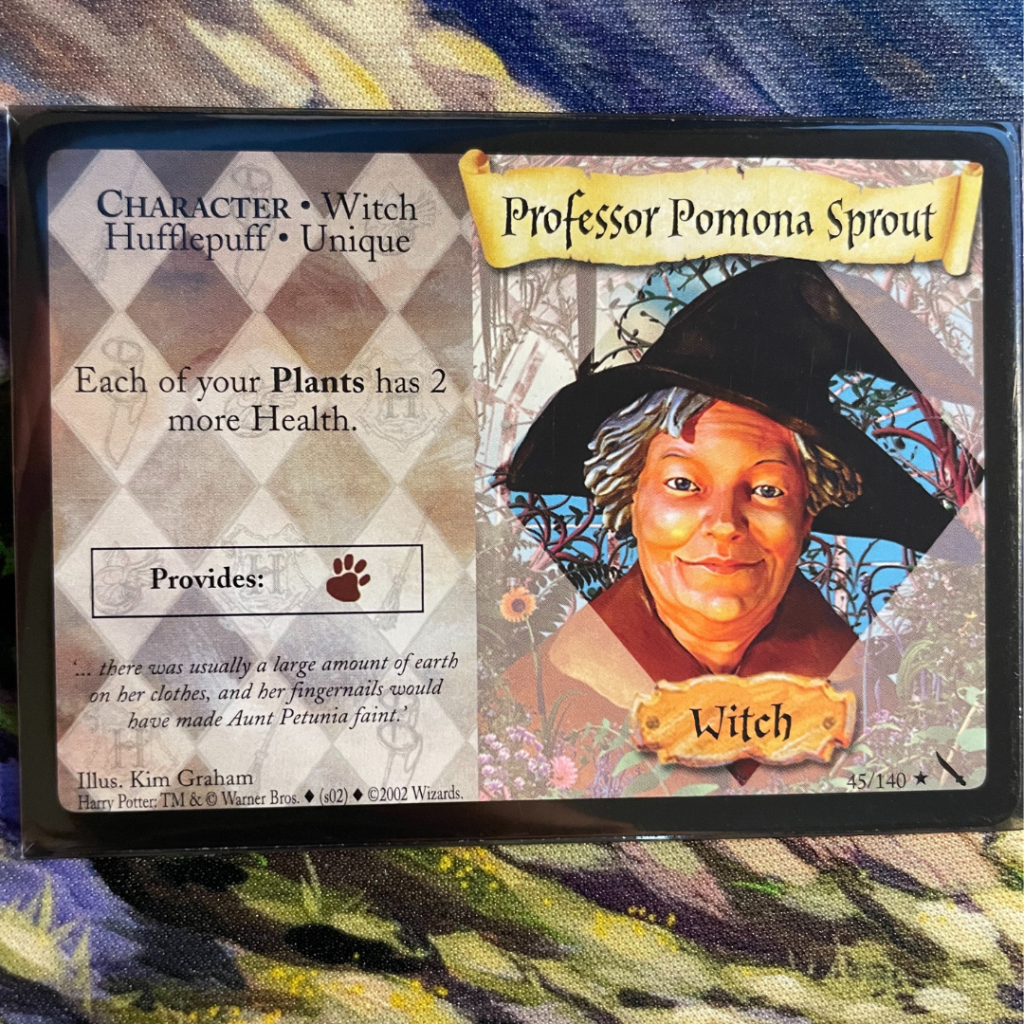 Professor Pomona Sprout (45/140) is a starting character for one of the themed or tribal decks that I mentioned earlier. In this tribal deck example, Professor Sprout is Head of the Herbology Department at Hogwarts; in Harry Potter and the Chamber of Secrets, she tells the students that the day’s lesson will be to re-pot seedling mandrakes, so in this deck, we, of course, have to add Mandrakes (34/140). Along with the Mandrake, Cobra Lily (56/80) will be in the deck, adding to the damage that will be inflicted on our opponent. 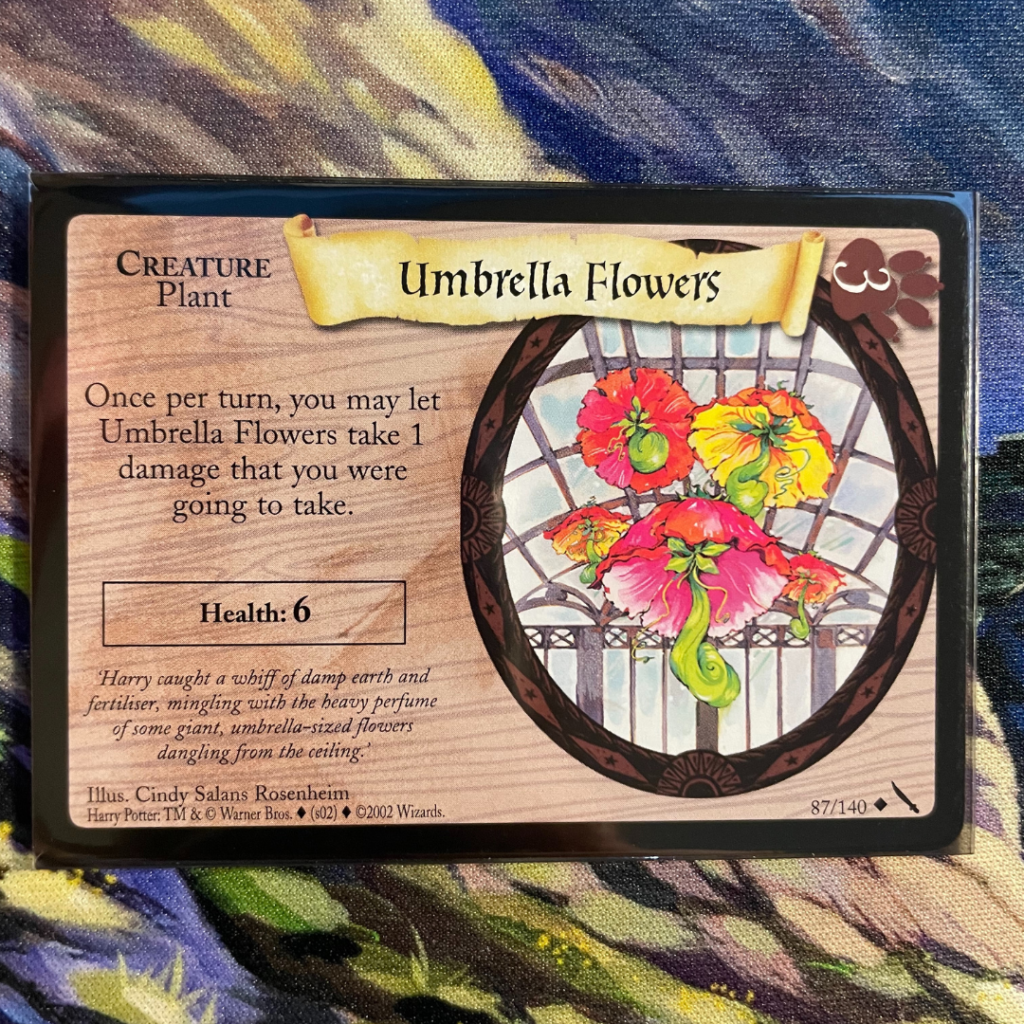 Plants also have healing powers, so we can’t forget those; Umbrella Flowers (87/140) and Leaping Toadstools (119/140) are included in this deck as a way to heal the damage that your opponent does to you. Because Professor Sprout is the Head of Herbology, she has the ability and knowledge to give the healing plants more health. Professor Sprout’s card ability reads: “Each of your plants has 2 more health.” This comes in handy when going up against a very competitive witch or wizard. 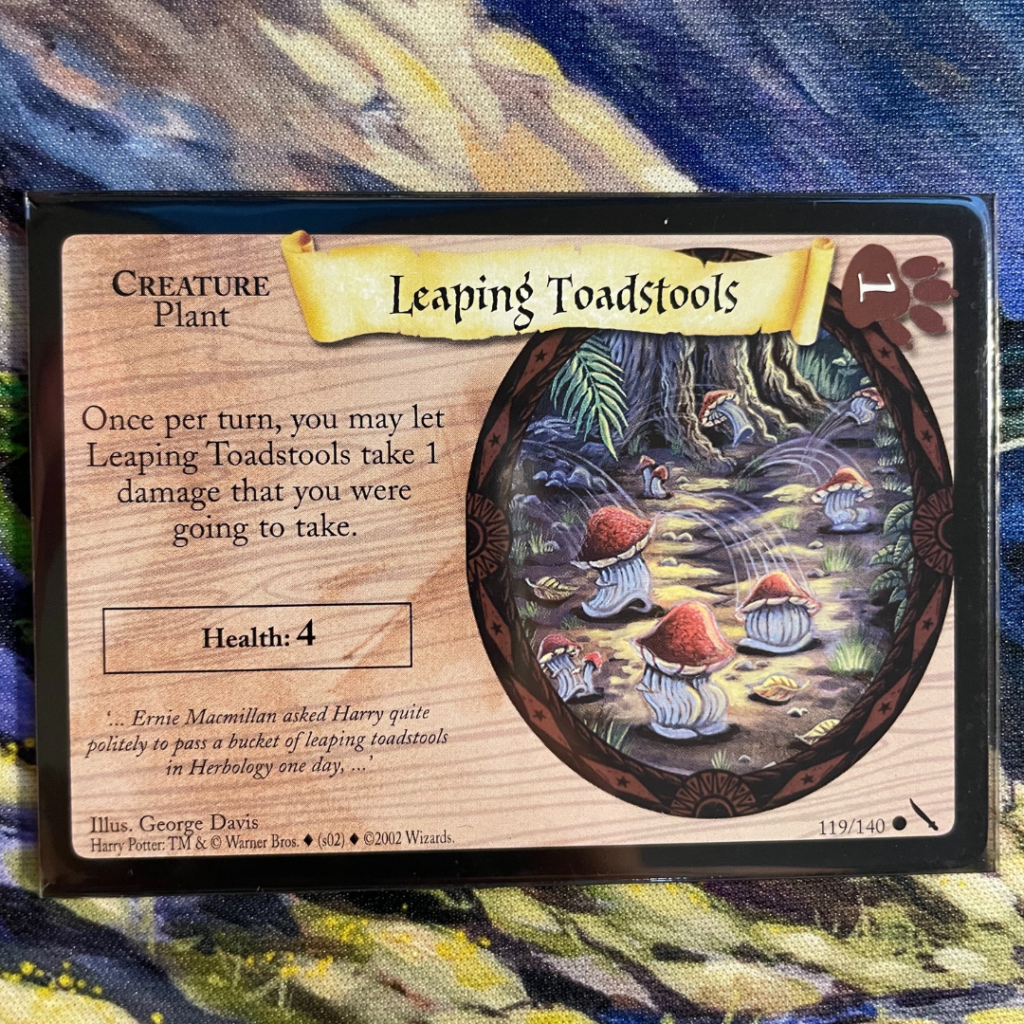 Tribal decks are a fun way to build around certain details of the book and follow along. Even if you don’t have a tribal deck, though, it’s clear from the examples throughout the article that the cards were made with great precision and details that follow the storyline, characters, locations, and more. There are countless examples of ways to build your decks and add to your collection.

Whether you are playing the game or simply collecting the cards, you won’t be disappointed in what you see on the cards from each expansion. No matter how you approach the card game, always remember to have fun and let your imagination shine!