The blue Ford Anglia that was used in the second Harry Potter movie has been stolen, reports BBC News. Apparently, the car had been moved to the South West Film Studios in St. Agnes for an exhibition. Police believe the car was towed or trailer-lifted from the scene as it cannot be driven. A Devon and Cornwall Police spokesman said the vehicle was taken between 5:30 p.m. BST on October 26 and 4:15 p.m. BST on October 27. 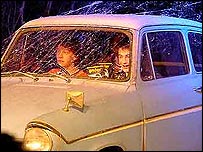 Police also stated: “The thieves may not have known its connection with the films and just thought it was a classic car, or it may have been a ‘Harry Potter’ freak.”

Thanks to everyone who wrote in!