Updated: Coverage of the Grand Opening at Universal Studios Japan Commences with a Special Report

MuggleNet’s special correspondent from Japan, Jay Mohri, attended a special preview engagement on Monday night to begin the celebration of the grand opening of The Wizarding World of Harry Potter at Universal Studios Japan. You can reah Jay’s  English and Japanese report below:

At around 7:00 p.m., The Wizarding World of Harry Potter was packed with journalists, staff members, guests, and fans from around the world. The red carpet and stage for the event was located at the main road of Hogsmeade, with the stage facing towards the entrance and its back facing the castle.

As guests started coming out onto the red carpet, fans joyfully waved and screamed. The walk went on until the guests were called up on stage to make a speech. Among the special guests were Tom Felton, who portrayed Draco Malfoy in the films, and Evanna Lynch, who portrayed Luna Lovegood.

The pre-opening event started with a speech from the president and CEO of USJ, Glenn Gumpel, who had his lovely wife by his side on stage. He explained how he wants Japanese fans to come and enjoy The Wizarding World of Harry Potter and that he sees this as a way to give back to the Japanese community.

The event also had Japanese celebrities on stage, such as SMAP and TV personality Becky.

Led by Tom and Evanna, the fans cast "Lumos" and were greeted by a display of spectacular fireworks, which illuminated the night sky right behind Hogwarts Castle and the Hogsmeade shops. Moments later, a massive amount of colorful confetti came whirling down on us, lingering in the air for a while. It all seemed like the event had finished, but the fans got a surprise "gift" at the end in the form of a chance to ride the Forbidden Journey ride. 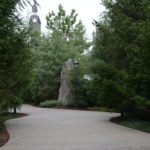 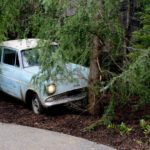 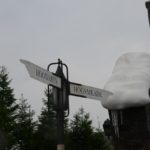 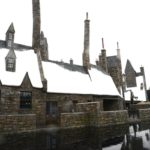 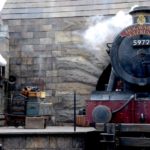 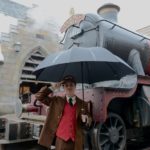 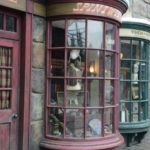 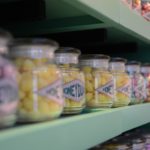 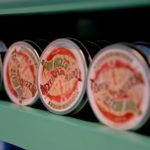 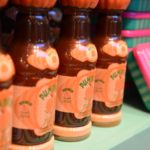 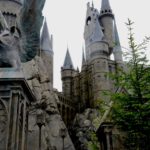 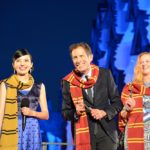 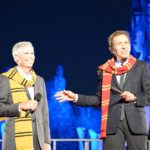 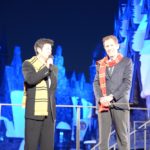 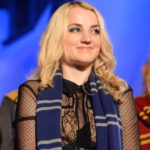 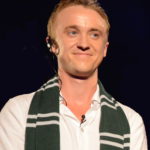 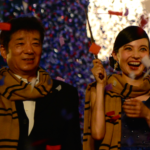 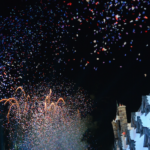 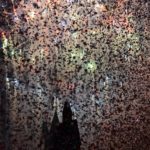 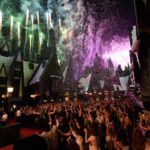 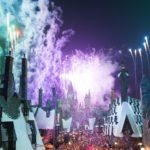 Additional coverage of the grand opening events is here, and you can also check out an in-depth review of Japan’s 4K3D version of Harry Potter and the Forbidden Journey is in this article.

On the eve of its Grand Opening, Universal Studios Japan celebrated the much anticipated opening of The Wizarding World of Harry Potter today, Monday July 14, beginning at 7:15 pm. Approximately 1,000 specially invited guests celebrated the opening along with a dazzling display of fireworks.

At 7:15 pm this evening, guests arrived and walked the red carpet on their way to a specially constructed stage for these grand opening events in Hogsmeade village amid thunderous applause.

At approximately 7:40 pm, with the special guests gathered on the stage, including Tom Felton who played Harry’s rival Draco Malfoy in the Harry Potter films, and Evanna Lynch who played Luna Lovegood in the film series and who also attended the April 18 opening date announcement event, joined the 1,000 Harry Potter fans and incanted the Lumos! spell together, illuminating Hogwarts castle and Hogsmeade village in The Wizarding World of Harry Potter. The spell set off a magnificent display of fireworks, colorful confetti, and thunderous applause from the crowd marking the historic moment of the opening of this 45 billion yen national level project and its economic effect of 5.6 trillion yen over ten years.

“The craft and attention to detail across The Wizarding World of Harry Potter at Universal Studios Japan is incredible and I will take away the memory of Hogwarts castle reflected on the Black Lake in particular. I’m delighted that Harry fans in Japan and around Asia can experience a physical incarnation that is so close to what I imagined when writing the books,” said J.K. Rowling.

Be sure to check out the special interactive USJ website where visitors can fully immerse themselves in the world of Harry Potter and virtually experience every corner of The Wizarding World of Harry Potter. www.usj.co.jp/harrypotter