Finally, we get to enter the wizarding world!

Note: The account I am using for this experience was having some technical difficulties, so until those are resolved, I’ll be using another account for the moments. Any personal experiences (i.e., wand selection and Sorting) are on the QuaffleWitch account as that part was working. 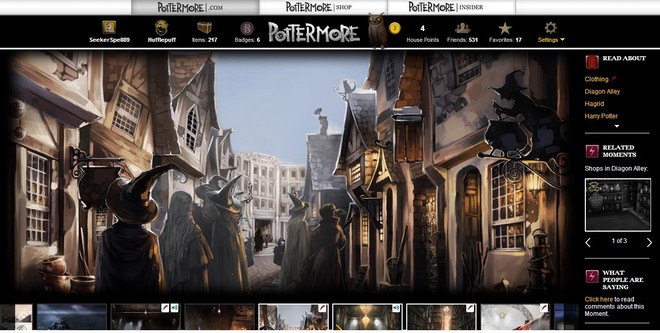 This moment is, to put it simply, dazzling. Like Harry, I wish I had about eight more eyes just to try and take it all in. The soft murmuring of shoppers, the chime of doors being opened…it’s simply magical. Though not as colorful as walking down the street at the Studio Tour, it seems to follow the Diagon Alley described in the book more.

We also get some information on wizard clothing. Though interesting and entertaining, the only thing we really didn’t know from the novels was that the colors green and purple are particularly favored by wizards (and it could be argued that we could infer this from the books).

Originally, this was the moment where the reader became more involved as you picked up your shopping list, opened your account at Gringotts, and bought your school supplies. Now, that experience and following Harry’s story are very separate. I’m not sure how I feel about this. On the one hand, it was nice to do all the shopping and things as Harry did them. On the other, it now makes the personalization of Pottermore more immediate and focused on you.

This is the first entirely new moment I’ve seen. With the site revamp came this new format, so whereas before at this point, you were unlocking your Gringotts account (and that was all), you now get to actually see the inside of the bank. I like the ornate details included, as well as the fact that you start at the ceiling and move down, getting a complete overview of the bank. 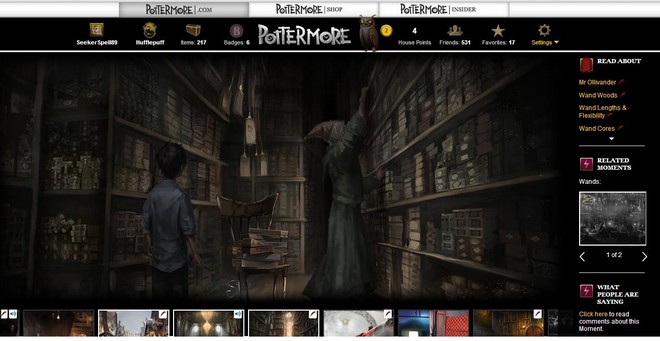 This is the second new moment and one I quite like. The artists really captured the feel of this dusty, musty shop stuffed with wands where the air seems to tingle with magic. I especially like the constantly floating dust here; it is almost imperceptible, but it really helps set the mood.

Here we also find another of my favorite tidbits from Pottermore: the new information on wand woods, lengths, and cores! I find all of this so fascinating. Once again, the depth of detail astounds me! The descriptions of my wands have always been, in the least, a confidence booster, and I have found them to be, for the most part, accurate. There’s been discussion that they are “cold readings” and could apply to many different circumstances, but personally, I like them quite a bit.

And so, a bit nervous (I completely understand how Harry felt), I went to have my wand choose me.

I was almost in complete shock with the result. My other wands are nearly identical; they are both phoenix feather, ten and three-quarter inches, slightly springy, and made of cedar and cypress. This time, I’m not quite sure what happened. Whatever the case, a completely different wand than I have ever gotten chose me. The decision was yew with unicorn hair, fourteen and a half inches, reasonably supple. Wow. I knew that Voldemort’s wand was yew, so that was a little concerning at first. However, the description says that this wood is rare, its matches unusual, and has a dark reputation in dueling (um…I don’t think I’m much of a dueler). Ollivander also notes that yew never chooses timid or mediocre wizards (whew, that’s nice to know, I guess). Unicorn hair is consistent and faithful. The drawbacks of this core (they are said to not be as powerful) I would argue are counterbalanced by the wood. As for the length and flexibility, perhaps when I took the quiz my personality was coming out in more force, as it is on the longer side.

Well, now that we have supplies, it’s time to start our journey to Hogwarts! Next time, we’ll find out all about Houses, friends, and foes, and we start lessons.

As always, if you have any comments on these chapters, please feel free to mention them below!