From June 2, 2012, to September 30, 2012, Harry Potter: The Exhibition was hosted at ArtScience Museum in Singapore. This was its first Asian stop and seventh stop overall. 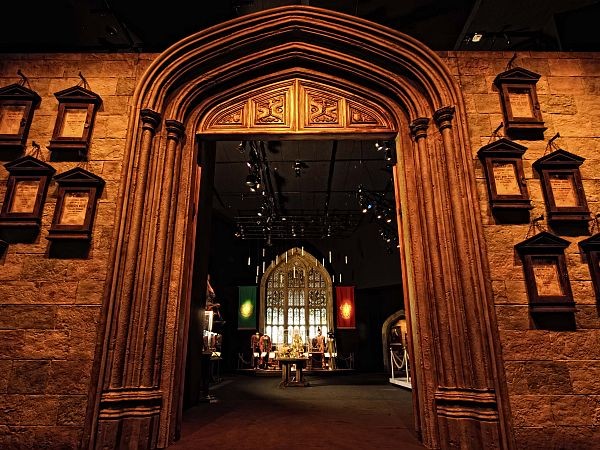 This exhibit is a “tribute to artistry and craftsmanship,” “telling the story of human creativity,” in the words of Eddie Newquist (Chief Creative Officer of Global Experience Specialists, Inc.) and Nick Dixon (Executive Director of ArtScience Museum, Marina Bay Sands, Singapore). The exhibition boasts a collection of all the Horcruxes, except for Harry, of course, as Robin Stapley (Creative Director of Harry Potter: The Exhibition) would have you know.

This exhibition was a “labor of love,” with Warner Bros. Studios generously giving up original movie artifacts, and the team spending two weeks in the Great Hall at Leavesden Studios to amass the items. The Phelps twins praised the Weasleys’ Wizarding Wheezes’ products, which were realistic packages rather than just empty boxes. 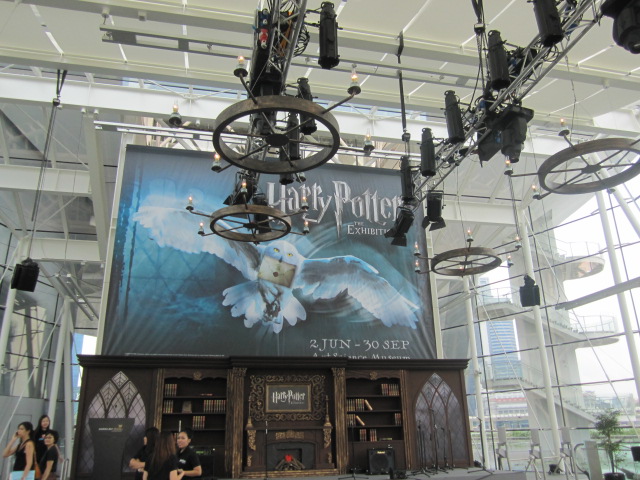 One of the exhibition guides invited us to the Sorting Ceremony where the Hat Sorted a few fans in the House they expressed partiality toward.

Clips from the films played on eight glowing screens with Hedwig’s Theme echoing in our ears. One side of the room lifted to reveal the Hogwarts Express amid billowing steam.

The portrait of the Fat Lady brought us to the Gryffindor common room. On display was a noticeboard featuring handwritten memos by students, everything from lost articles to recruitment notices. This particular noticeboard worked two ways, with the other side doubling as the blackboard in Professor McGonagall’s classroom.

Ron’s side of the wall was lined with Chudley Cannon posters; while Harry’s trunk displayed the discarded box of spiked chocolates from Romilda Vane and the Marauders’ Map amid messy and unmade beds.

Professor Lockhart’s test papers, wand, and lilac stationery were overshadowed by an ornate, life-sized portrait of him. A Boggart rattling in an old wardrobe marked Remus Lupin’s space, while Umbridge’s “office” was decorated with pink walls, chairs, her pink outfit, and Cornelius Fudge’s black robes. Quills, parchment, and the Ministry of Magic paper airplanes littered her desk.

This reporter heard the Herbology greenhouses before seeing them as a row of Mandrakes wailed ear-splittingly when pulled. Professors Snape and Slughorn’s Potions “dungeon” was littered with insidious fluids stored in oddly-shaped vials and test tubes, an open box of bezoars, and eerie human flesh lookalikes in large jars. Professor Trelawney’s space had a cup of tea leaves we could attempt reading.

The Bulgarian and Irish national Quidditch robes— as well as the Gryffindor, Slytherin, and Hufflepuff ones— were presented proudly among numerous trophies that included a “Transfiguration Diploma.” We saw Harry and Draco’s Nimbuses along with a chest of Quidditch balls straight from the movie, various Quidditch periodicals, a program from the 422nd Quidditch World Cup, and a few pairs of what seemed to be Omnioculars. This reporter had way too much fun chucking actual-sized Quaffles through hoops in the interactive arena!

Hagrid’s pumpkin patch from Prisoner of Azkaban was beside a realistic likeness of his plus-sized hut. A Macnair figure loomed threateningly over the tiny costumes that Daniel Radcliffe, Rupert Grint, and Emma Watson donned all those years ago. In the background stood Buckbeak, with real feathers laboriously inserted by its creators.

We were invited to sink into Hagrid’s endlessly huge armchair. Along with a faint strange smell, other artifacts included his pink umbrella, a copy of the Monster Book of Monsters, and Norbert(a)’s egg dominating his dining table. Crates and other knick-knacks adorned his walls and ceiling.

The forest’s misty foliage revealed regal centaurs, a terrifying Hungarian Horntail, one of Aragog’s descendants, and even a surprisingly adorable baby Thestral.

Mementos from Harry’s many run-ins with Voldemort and other dark forces included Quirrell’s costume, relics from the obstacles protecting the Philosopher’s Stone, and the Stone itself. The figure of a Petrified Colin Creevey, used in the film, was placed next to Tom Riddle’s Slytherin robes. The Angel of Death statue from the Little Hangleton graveyard, in the fourth film, was displayed along with grubby Azkaban costumes, Kreacher, and a Dementor fluttering menacingly above our heads. In a special spot, through the aid of sound effects, we heard Voldemort himself whispering in our ears…

The Death Eater exhibit showcased Bellatrix and Voldemort’s costumes, alongside Death Eater masks from the different films, as well as Bellatrix’s dagger from Deathly Hallows. A Dark Mark, digitized to look like wispy smoke, hovered above the artifacts. The Horcruxes— the original ring, cup, locket, diary, and diadem from the films sat proudly in their display case. Nagini remained faithfully by the side of Voldemort’s costume. Harry, of course, was conspicuously missing.

Walls lined with “Wanted” Death Eater posters and public notices with safety instructions from Half-Blood Prince preceded the Great Hall, which had floating candles! We saw framed Educational Decrees from Umbridge’s reign at Hogwarts and hangings bearing the House colors and symbols. The doors, walls, and paneling looked authentic, the molds being as close as possible to the original sets. The Triwizard Cup and a copy of The Life and Lies of Albus Dumbledore lay at one side. Fred and George’s Hogwarts robes stood alongside a whole host of deliciously colorful Weasley’s Wizarding Wheezes’ products that included genuine Skiving Snackboxes. An elaborate Quidditch board game from Prisoner of Azkaban was featured along with articles from the Daily Prophet.

Tonks, Sirius, Dumbledore, and McGonagall’s costumes, and the figure that “played” Dobby, were displayed with a small case that contained the Deathly Hallows. The Yule Ball section showcased lavish costumes and the ice-sculpture centerpiece used in the fourth film. Neville Longbottom’s costume stood tall next to the sword of Godric Gryffindor, and a fully-grown, magnificent Fawkes in an adjacent case. The dining area filled with genuine-looking food items transported us directly into a real Hogwarts feast. Bags of Zonko’s and Honeydukes’ products, jars of sweets, boxes of Fizzing Whizzbees, and Chocolate Frogs sorely tempted us.

A corridor full of portraits applauding us, complete with sound effects, led us to a souvenir shop, with exorbitantly-priced Potter memorabilia placed under “shop” headings like “Gambol & Japes” and “Borgin and Burkes.” While I did leave the exhibition empty-handed, my mind is still reeling from the incredible journey I experienced. 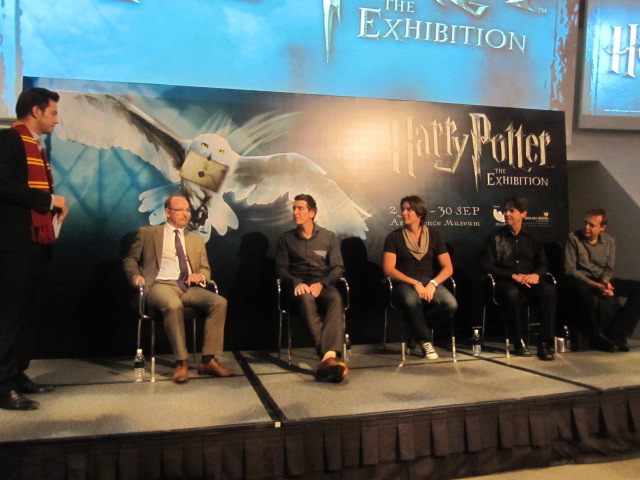