PEZ Candy, Inc. has followed through with its vow to bring Harry Potter fans a set of limited-edition versions of the celebrated candy dispensers! As we reported just over two years ago, the set will be released in time for the legendary company to make good on its promise to have the set in customers’ hands by the end of 2015. Check out the artwork of the collection in its special packaging below. 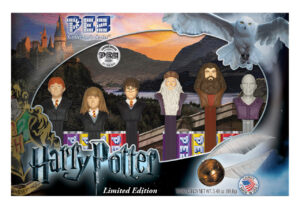 Christian Jegen, PEZ’s CEO and president, is confident that fans will enjoy this newest addition to the company’s Collector’s Series line of releases:

We are very excited to welcome Harry Potter to the line of PEZ Collector Sets. “Harry Potter” has been a recurring request from fans, young and old, for quite some time … We know this set will be on top of their holiday wish lists!

The set consists of six dispensers featuring the movie likenesses of some of the series’ most integral characters: Ron, Hermione, Harry, Dumbledore, Hagrid, and Voldemort. And what good would the dispensers be without some candy? PEZ made sure to include two six-packs of the popular rectangular sweets. The magical dispensers are now en route to US retailers with an edition size of 100,000—fans will definitely want to jump on this in time for the holiday season. The set will hit shelves with a suggested retail price of $17.99 USD.

Are you excited for this set to finally arrive? Will you be purchasing a set for yourself or gifting one to another Potterhead in your life? Check out the full press release below, and sound off in the comments section!