Peter Kenneth has just finished collecting all 74 available languages of Harry Potter and the Sorcerer’s Stone. Also known as “the Potter Collector,” Kenneth began his collection in 2005/2006 with his first foreign-language book, the Italian version, Harry Potter e la Pietra Filosofale. From there he became increasingly interested in the variety of languages as well as the art and background story of each language. I caught up with Kenneth to learn more.

For more information on the Potter Collector, check out his website.

For more information on rare books and how to identify how valuable your book is, check out MuggleNet’s rare books page.

Full Transcript with Peter Kenneth, Wednesday, March 2, 2016
Eleanor Harrison-Dengate: Which is your favorite edition? Why?

Peter Kenneth: My favorite translation is the Japanese edition because I think the artwork is simple, beautiful, and unique. Apart from the translations, the original Philosopher’s Stone will always be my favorite edition. Eleanor: Are there any interesting stories behind any of them?

Peter: The cover of the first Italian printing of Philosopher’s Stone showed Harry Potter without glasses. In an interview, Jo stated that she had requested that glasses be added for later printings. I have both books in my collection, and it is fun to see the difference. Each book has an interesting story of how it came to be in my collection. With the challenging books, I required the help of other fans throughout the world to assist me in acquiring the books. It is interesting that people who speak different languages and live in different parts of the world can join as friends because of the Harry Potter books and help one another.
That is most interesting. Eleanor: Which is the weirdest edition? Why?

Peter: The weirdest edition would have to be Farsi. The cover is a mixture of cartoon, a real boy, and what looks like a large house. Though an odd cover, it is one of my favorites. Eleanor: What reactions have you gotten when you show people your collection?

Peter: Reactions are fun and interesting from both Harry Potter fans and non-fans. Both groups tend to ask a variety of questions about the books, rarity, value, and acquiring methods. One fan was overwhelmed by the emotion of it all and cried. Some fans are speechless and hesitate to touch the books. Non-Potter fans often appreciate the collection because of the wide perspective that is represented geographically, culturally, socially, and artistically.

Eleanor: What was the last book in your collection? Why was it last?

Peter: Urdu was the last book in my collection. Although it is not difficult to find, it is expensive, so I focused my energy on hard-to-find books like Mongolian, Asturian, and Greenlandic while waiting for a reasonably priced copy. 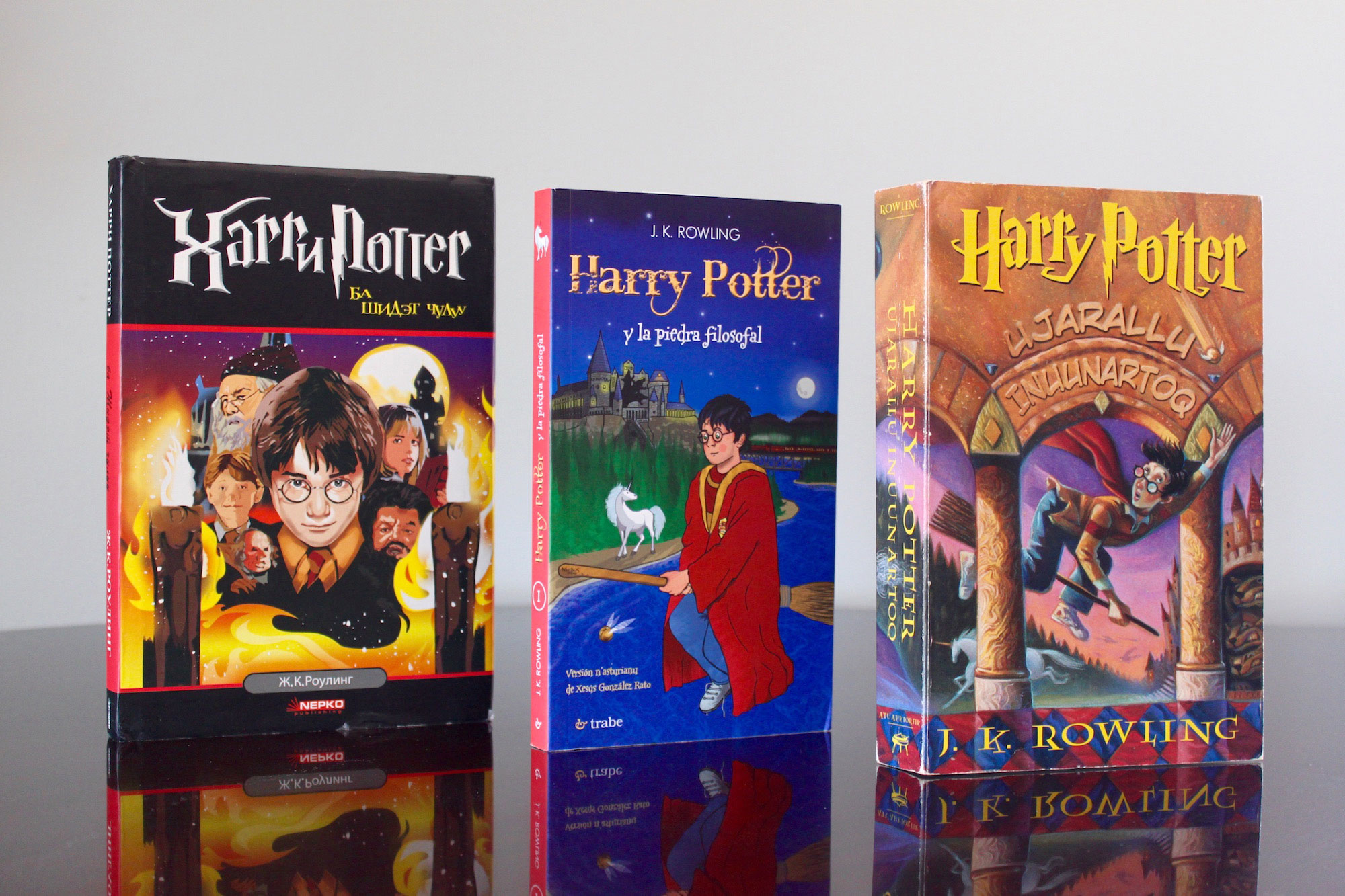 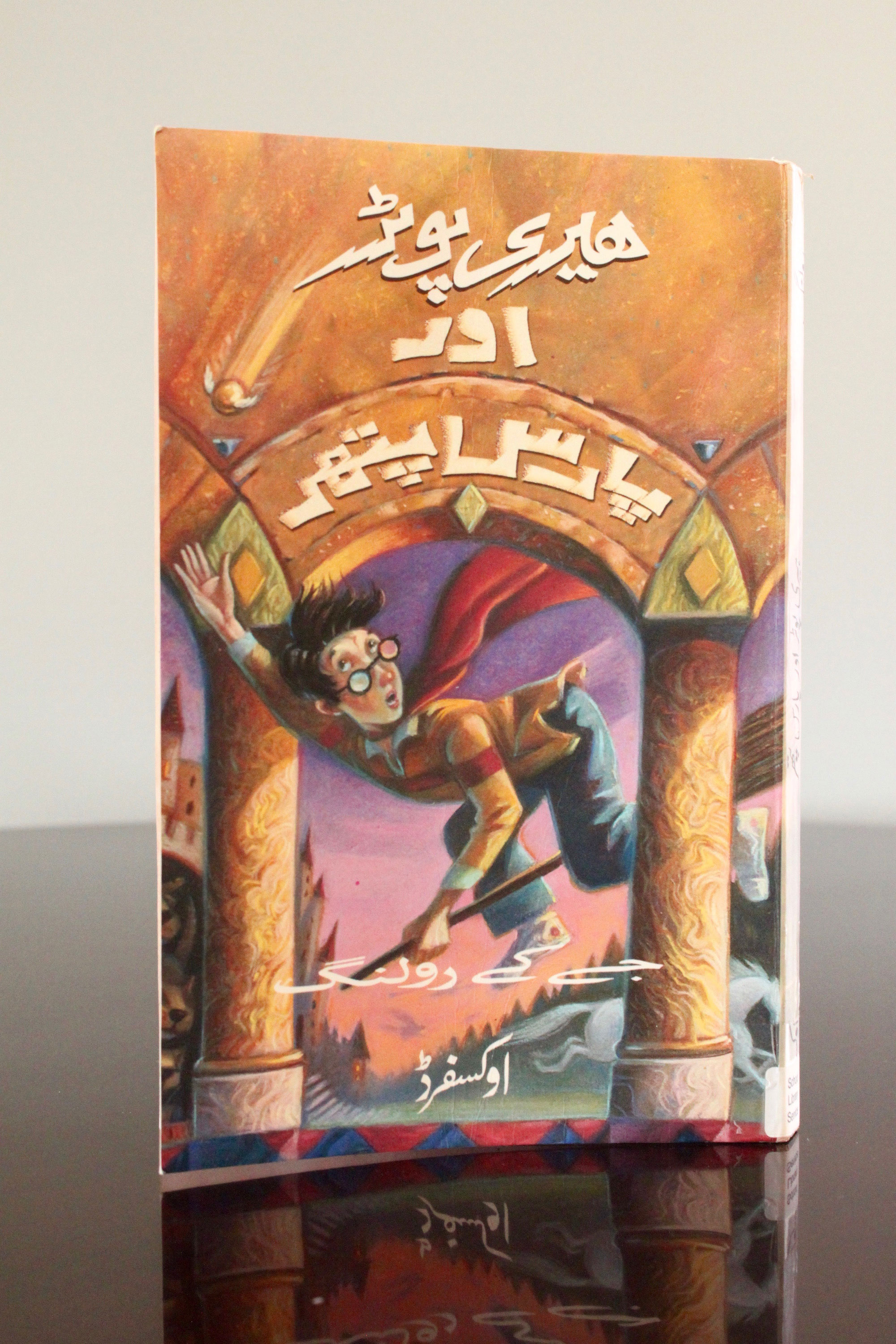 Eleanor: Does the page length vary much? Are some a lot skinnier and some a lot thicker? If so, which is the shortest? Which is the longest?

Peter: It is surprising how varied the books are in both length and size. Some are pocket size, while others are significantly larger than the US trade edition. The thinnest is simplified Chinese with 191 pages, and the thickest book is Japanese with 462. Braille, although not officially under the umbrella of “languages,” is by far the largest with four volumes and 11x11-inch pages. 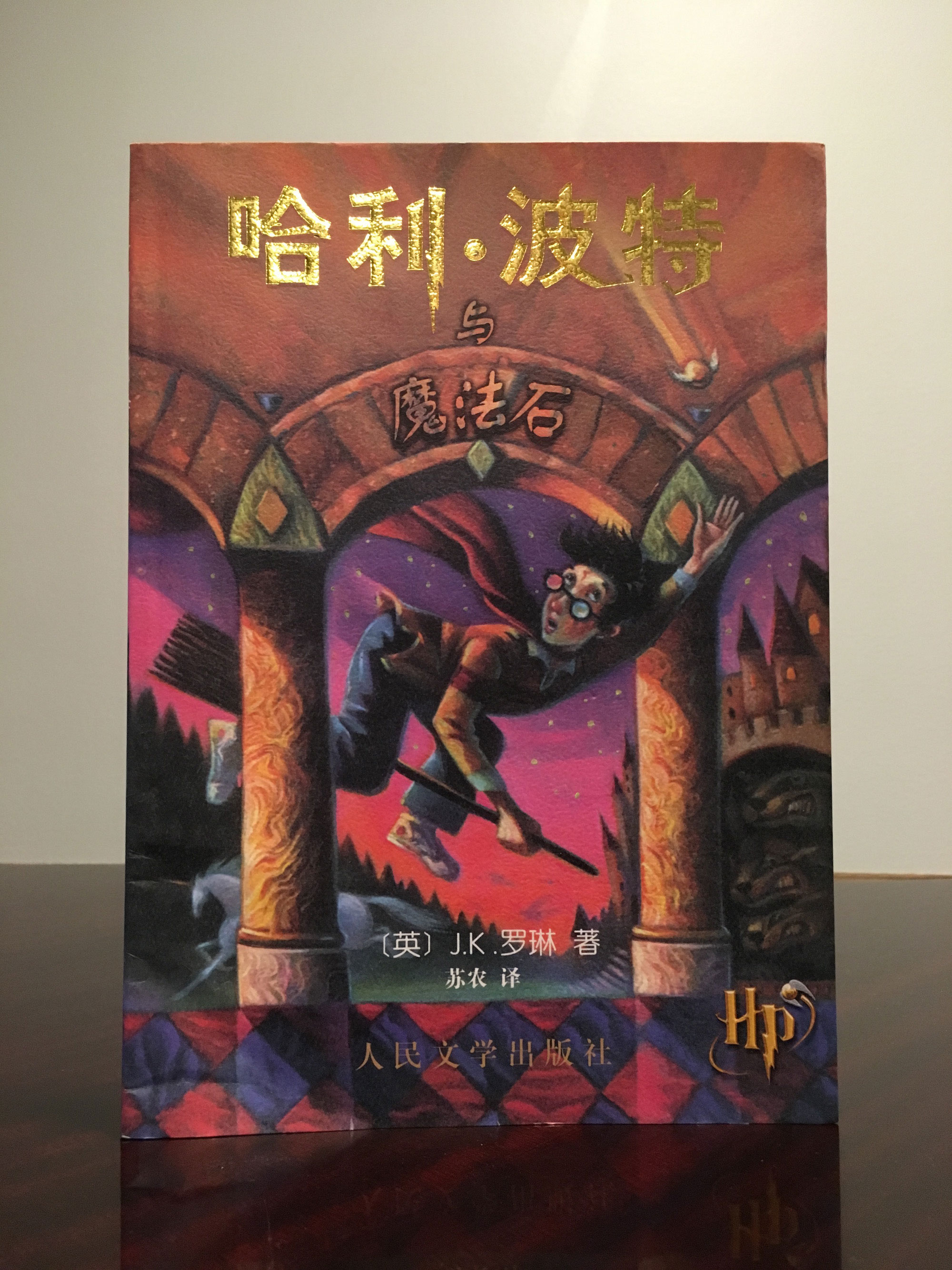 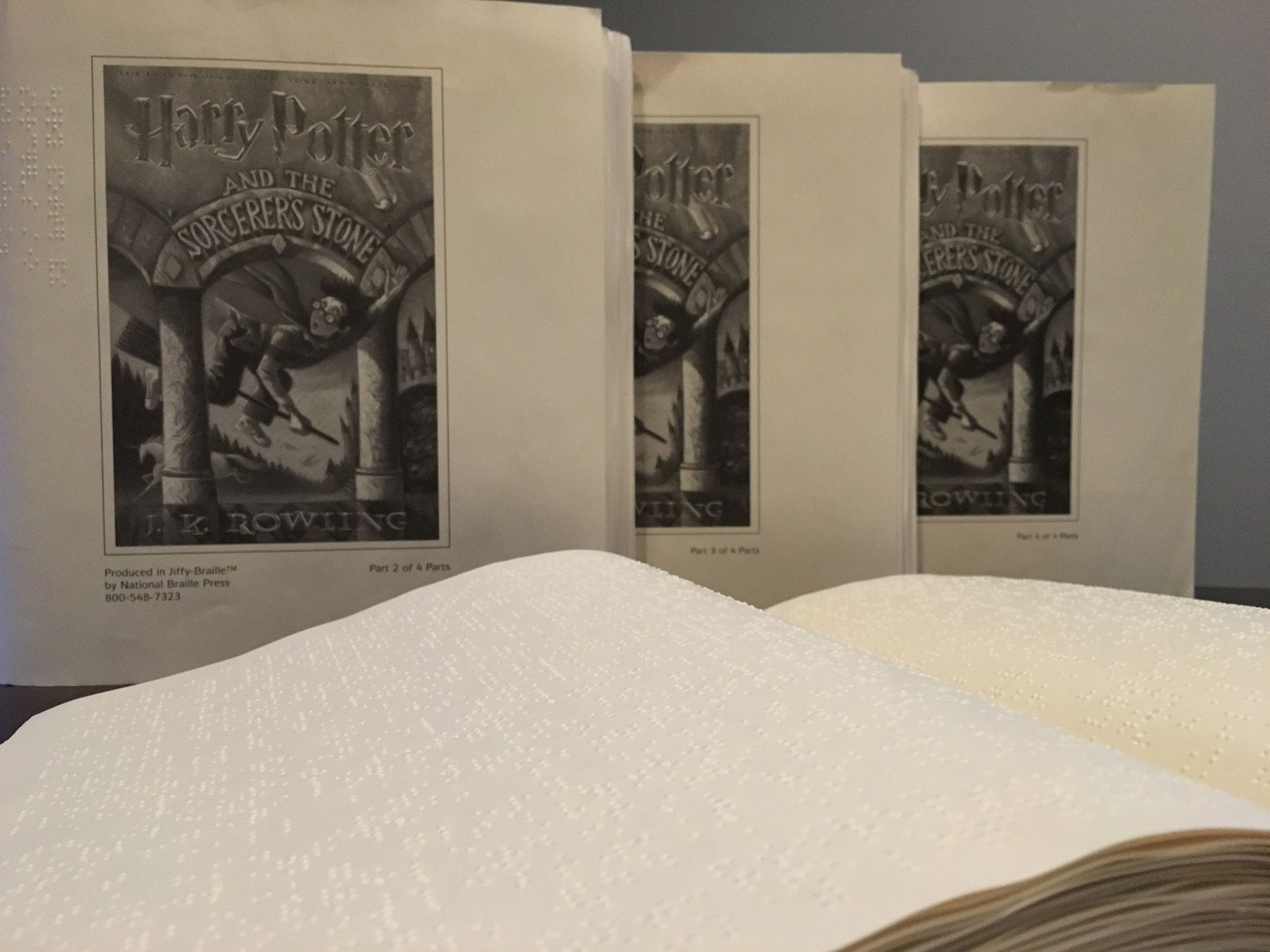 Eleanor: What are all of the languages?

Peter: There are currently 74 different languages represented, however, numerous languages have multiple translations. For example, the Portuguese translation has both Brazilian and European versions. Similarly, the Chinese translation is available in traditional and simplified Chinese.

There are also five adaptations, meaning that one of the 74 languages has been tweaked for a different region. Included in the five adaptations are American English, Spanish in two adaptations, Montenegrin (of Serbian), and Valencian (of Catalan).

Eleanor: How do you know you have them all?

Peter: Sean, the founder and author of potterglot.net, has compiled the most comprehensive and exhaustive Philosopher’s/Sorcerer’s Stone translation list that exists. I have utilized his list, in addition to validating and researching on my own.

Eleanor: Are there any plans for new translations?

Peter: Unfortunately, there are no official plans or release dates for additional translations at this time. However, there are some rumors about a possible Kazakh translation. A second translation of Romanian was recently released and has also been recently added to my collection. This translation was conducted by a separate publisher than was the first Romanian translation.

Eleanor: Do you collect other things, or just Harry Potter books?

Some of the rare books in my collection include:

The art pieces in my collection, which includes a pencil sketch and color of the Philosopher’s Stone cover art and a watercolor of the Goblet of Fire cover art scene, are by UK Harry Potter illustrators Thomas Taylor, Cliff Wright, and Giles Greenfield. 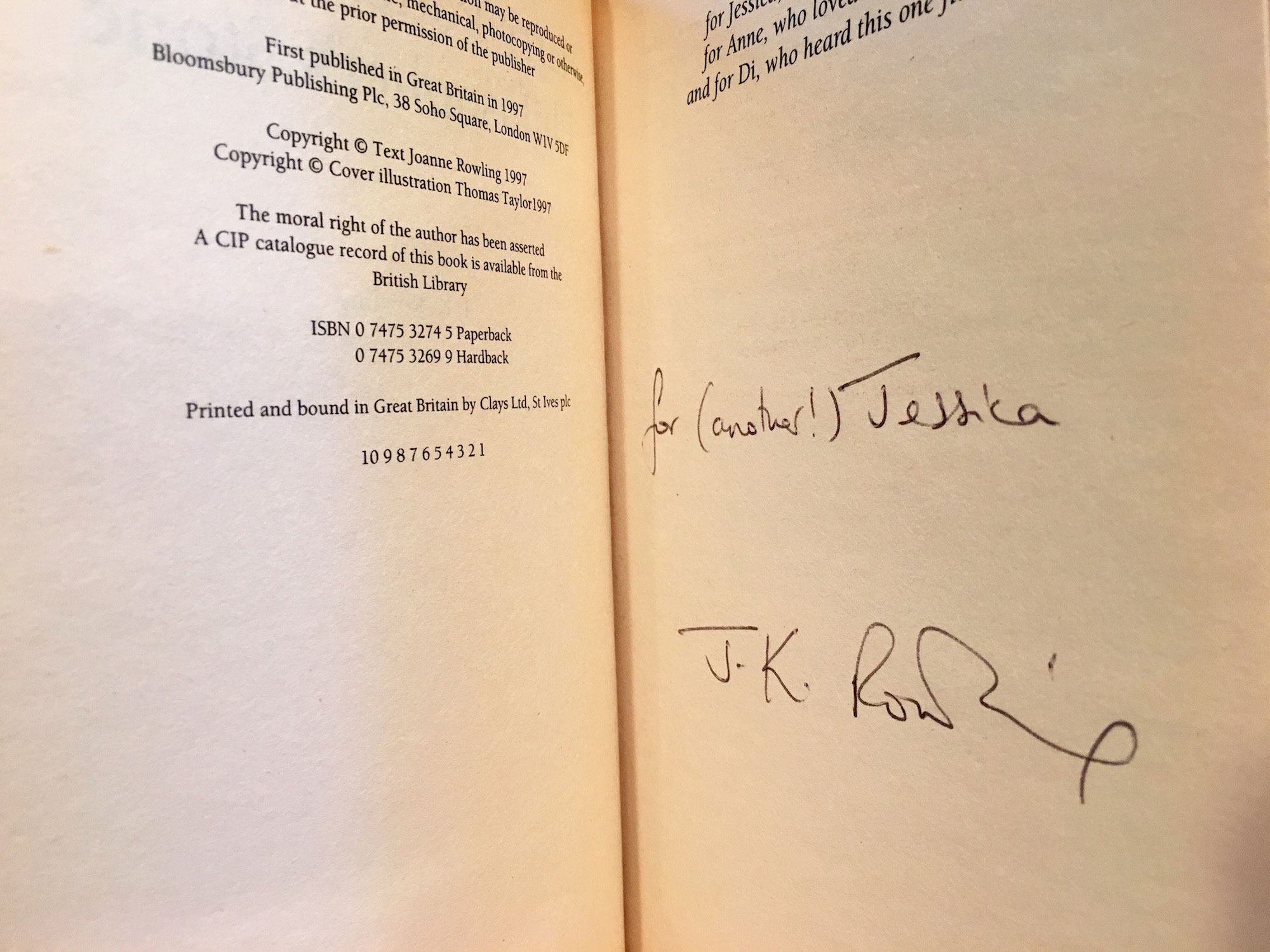 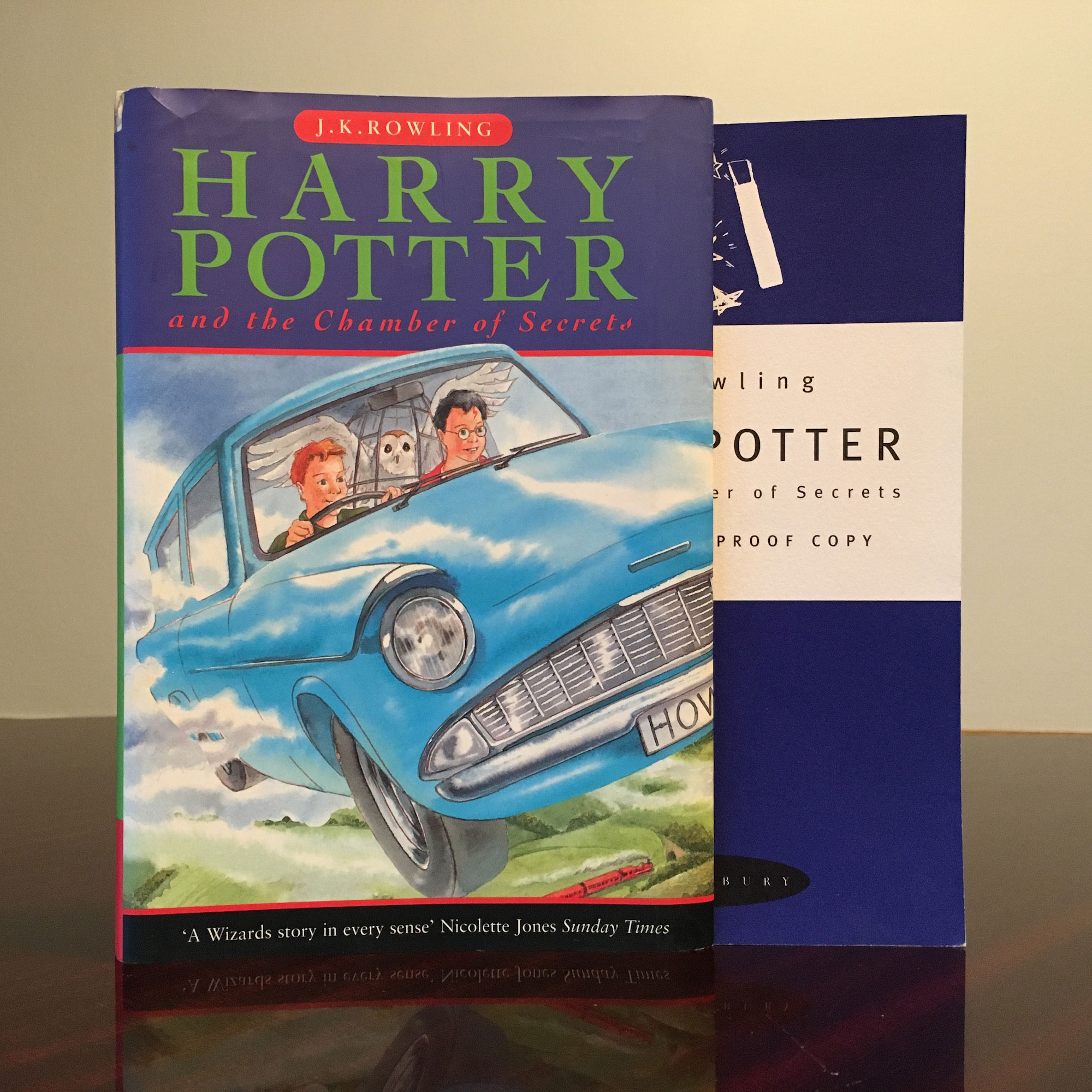 “Chamber of Secrets” proof with jacket 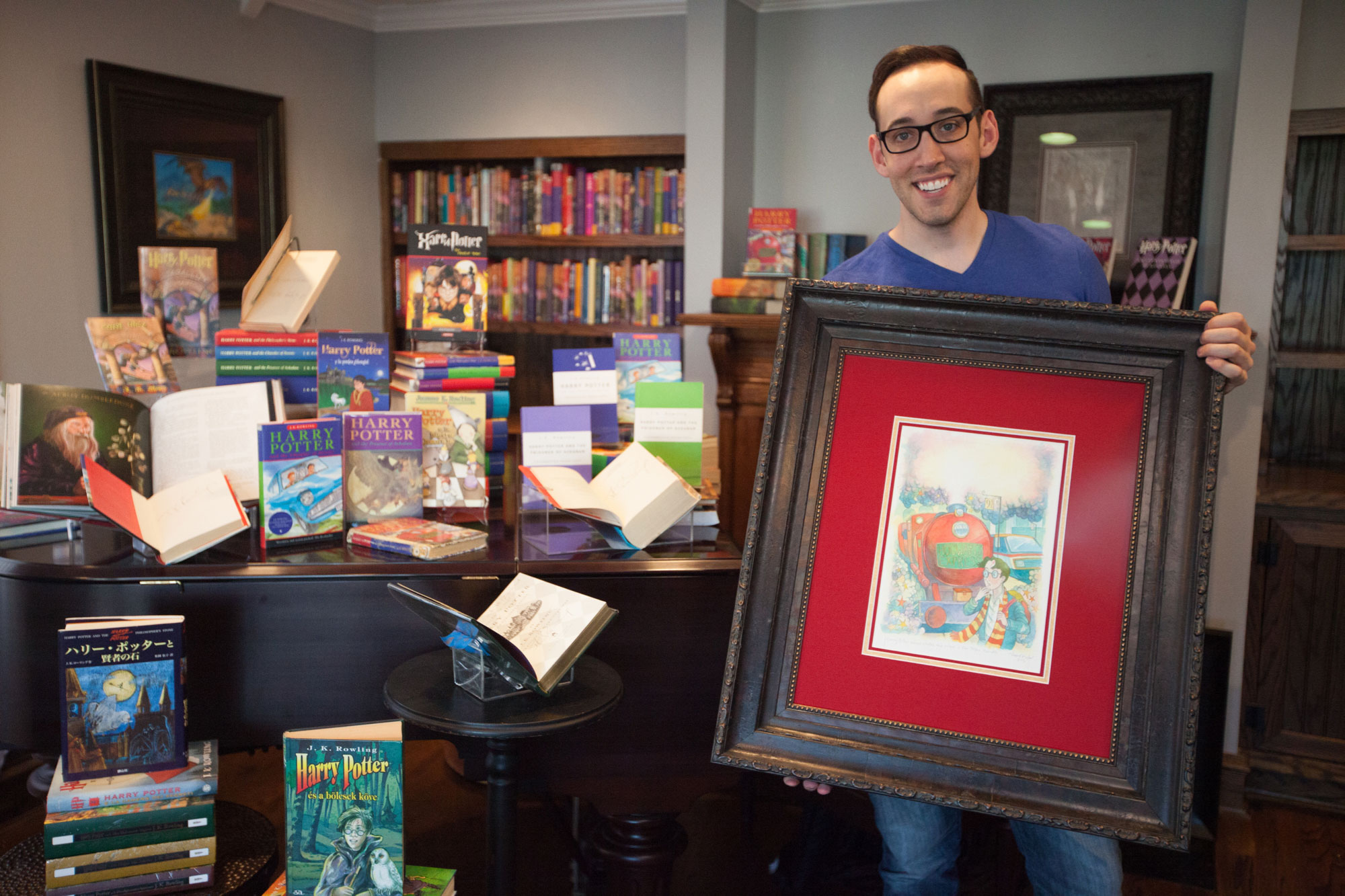 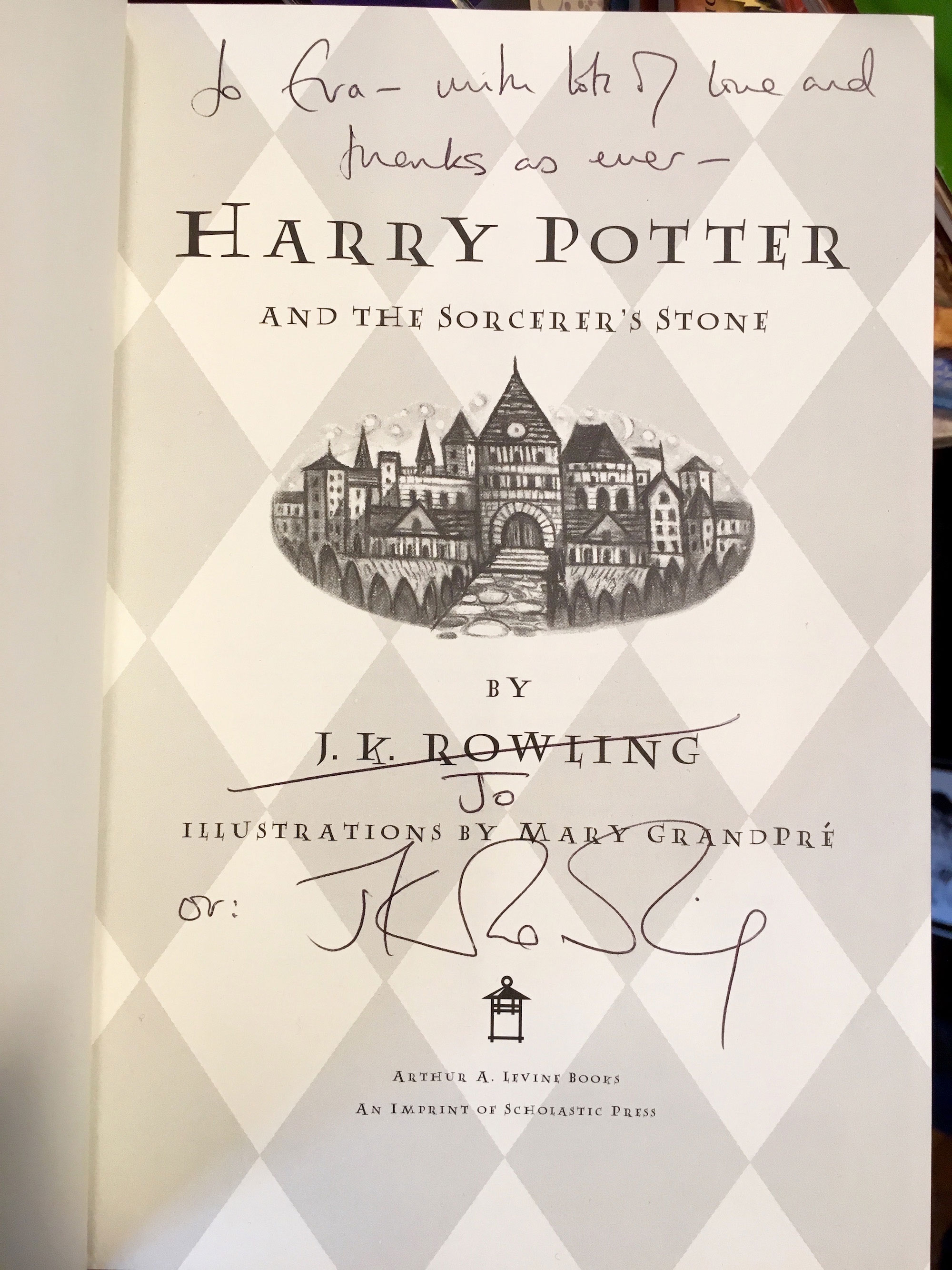 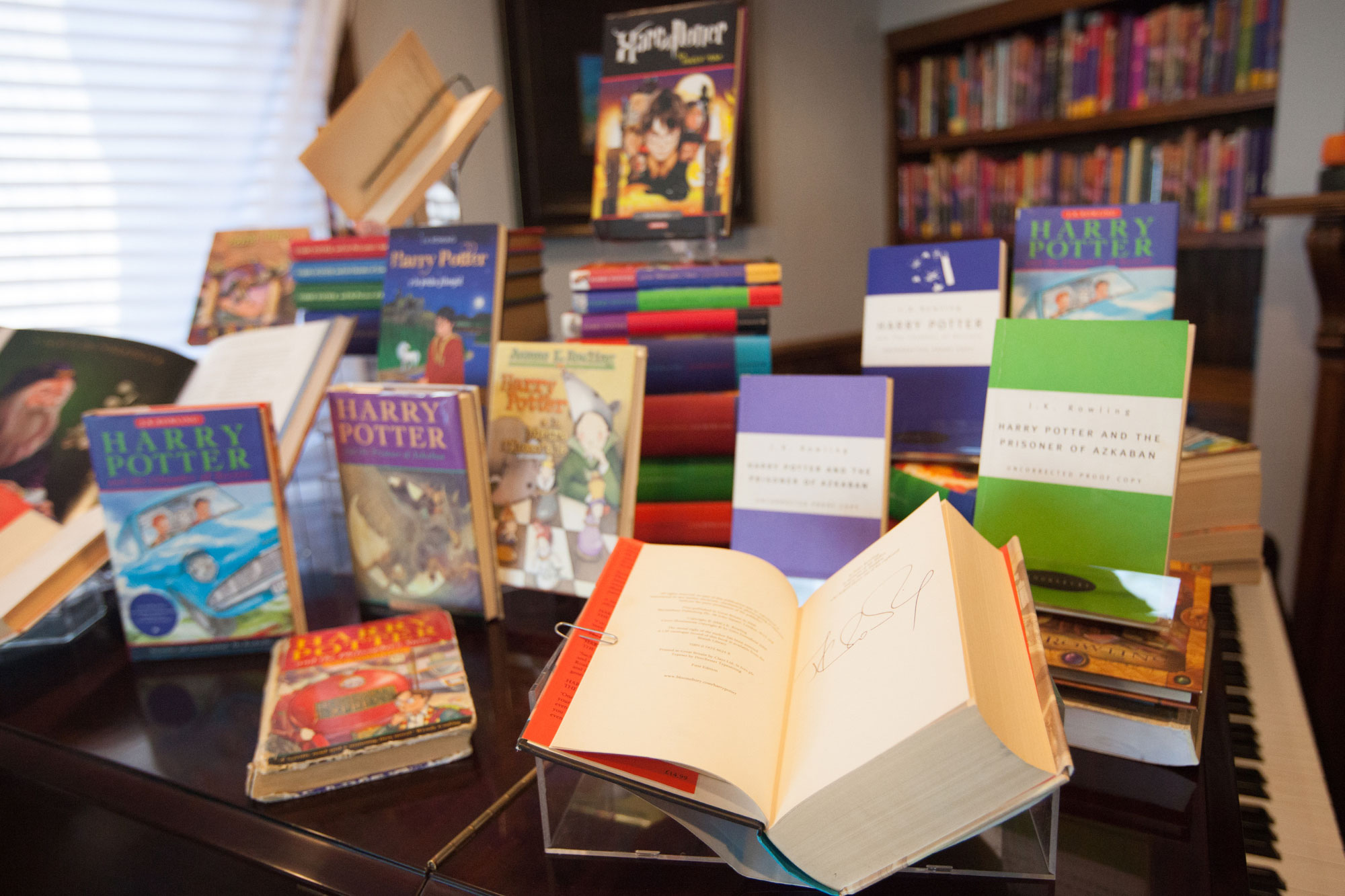 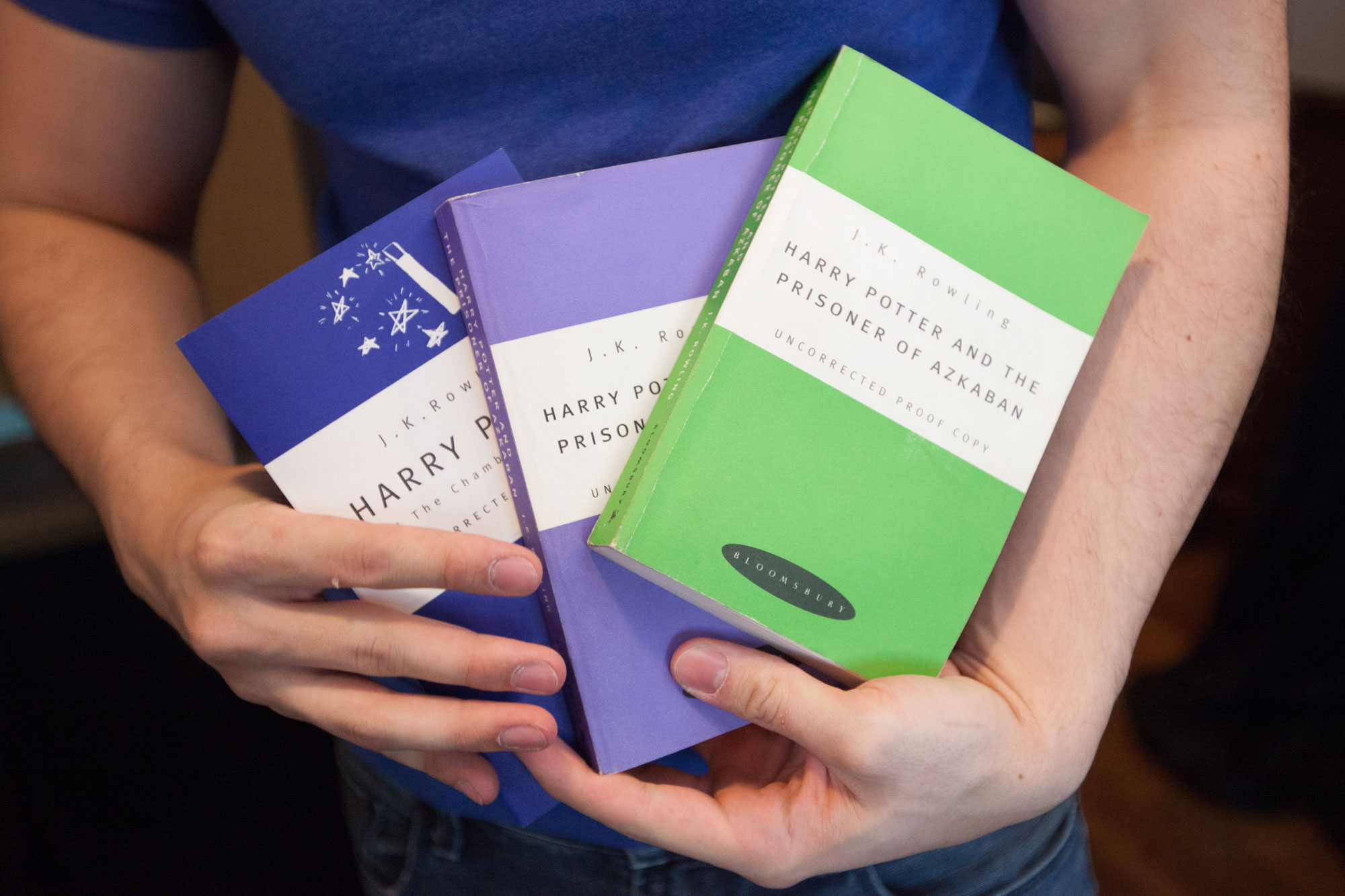 Eleanor: Do you lend your books out?

Peter: My goal of collecting is to share my collection with libraries, museums, schools, and organizations and to bring joy, encouragement, and education to others in the process. In the future, I hope to display my books at events like A Celebration of Harry Potter. Because the books in my collection possess a wealth of global education, history, and art, it would be a shame not to share them and their value.

Eleanor: What do you do when you’re not collecting Harry Potter books?

Peter: When I am not collecting Harry Potter books, I enjoy learning about nature, watching movies, singing and writing songs, and acting in plays and musicals. I work for a statistics company and sing professionally.

Eleanor: Will you be collecting all the Chamber of Secrets books, too? Are there less of those than Sorcerer’s Stone?

Peter: While I have collected several translations of Chamber of Secrets, I have not yet made a decision to collect all of the available languages. I may collect the ones that are most interesting to me. There are less translations of books two through seven than there are of book one. For example, Greenlandic had a short print run because the publisher went out of business one month after printing Sorcerer’s Stone, so there are a very limited amount of copies and only one book translation. Asturian, also, only printed book one. However, after speaking to the Asturian translator, there are tentative plans to publish Chamber and Azkaban in Asturian.

Eleanor: Why do you think so many people collect Harry Potter books in different languages?

Peter: There are many reasons why people collect. There is the basic challenge of collecting a complete set. Beyond that, there is the personal value of appreciating something that is artistic and beautiful. Collecting foreign books is a process that goes beyond the collection and engages conversations with people throughout the world, and that learning and friendship building process is priceless and rewarding.

Eleanor: Do you have any tips for Harry Potter collectors starting out?

Peter: Through the process of collecting Harry Potter books, I have grown in my passion for the subject matter, but I have also struggled with frustration as I encounter counterfeit books, signatures, and dishonest sellers in my collecting journey. Because I strive to keep an eye on the big picture of the market, movement, and materials, I have learned a great deal about the behaviors of those who would wish to dupe young and inexperienced collectors. It has become my mission to educate fans and collectors about these dangers and to help remove these items from the market. I have discovered methods of identifying fraudulent behavior, such as finding the unique errors in the first printing of Philosopher’s Stone.

Part of this education deals with the identifying of signatures and signature style changes of J.K. Rowling, of which I have been become an expert. I can clearly identify the changes in the signature styles of J.K. Rowling by specific time frames. I have used this skill to assist many collectors and sellers in making decisions about sales, about purchases, and about returning counterfeit items to sellers. These topics are covered on my website and in my article “Do Judge A Book By Its Back Cover.”

Eleanor: What is your Hogwarts House?

Peter: I am a proud Slytherin officially Sorted on Pottermore.

Eleanor: Which is your favorite book in the series? If it isn’t Sorcerer’s Stone, why did you decide to collect those over your preferred book?

Peter: My favorite book does change at times, but Sorcerer’s Stone is consistently my favorite. Because it was an introduction into the world of Harry Potter, it holds a bit of sentiment. If I had to choose to read one Harry Potter book for the rest of my life, it would be Sorcerer’s Stone.

Eleanor: Are you involved in any other parts of the fandom?

Peter: Mostly, I enjoy engaging other Harry Potter fans in conversations that are fun and educational. Through my website, thepottercollector.com, and Instagram (@thepottercollector) I love to help educate new and old collectors in their journey, to assist and teach about the authentication of Jo’s various and ever-changing signatures, and to provide a place for questions and communication related to the Harry Potter books and collecting.

Eleanor: How often do you take each out and flip through them?

Peter: When I first acquire a book, I flip through the book gently to appreciate the artwork and unique features of the book. As a collector, I want to maintain the value and integrity of the book, so I restrain myself from frequent flipping.