Watch the video of Emma speaking about inequality and violence against women at universities below.

Emma Watson takes her role as a UN Ambassador quite seriously, and so she should! Her words affect thousands of men and women who identify with her not just as the embodiment of the wise character of Hermione from the Potter films but also as Emma herself: a young woman, educated and empowered, taking a stand for gender equality while encouraging men and women of all ages to join the HeForShe movement.

The actress, who had previously announced a break from the entertainment industry to focus on the HeForShe campaign, her UN Ambassadorship, and her book club, Our Shared Shelf, addressed universities the world over in her 2016 Impact Report for the UN Assembly on September 20.

We need to see equal respect, leadership, and pay. The university experience must tell women that their brain power is valued, and not just that, but that they belong within the leadership of the university itself. 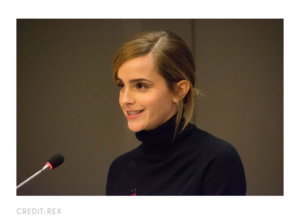 Her voice, and the voices of those who have joined her, truly move other people into taking action. Ten global universities have joined the HeForShe campaign and commited to bring gender parity to campuses. This report gives the UN an update on where these universities stand since joining the Impact 10x10x10 in 2015, where they set goals to fast-track gender equality in boardrooms, classrooms, and world capitals.

As part of the 10x10x10, participating universities will address imbalances within the school: ratio of men to women represented in university faculty and senior administrative positions, the fields of study selected by young women versus young men, and the number of female students at universities compared to their equal access to academic and professional career tracks.

So importantly right now, the experience must make it clear, that the safety of women, of minorities and anyone who may be vulnerable, is a right and not a privilege . . . a right that will be respected by a community that believes and supports survivors and recognises that when one person feels their safety has been violated, everyone feels their own safety has been violated.