In a press release today, USJ announced two new guest experiences sure to both terrify and delight.

During the daylight hours, special spells performed and aimed at cauldrons and barrels in Hogsmeade will cause an eruption of candy to spill forth as part of a Magical Trick or Treat experience.

Additionally, fall-themed food items will be available at the Three Broomsticks, such as mountain-shaped chocolate ganache and carrot cake, along with a Great Hall-type feast platter to include pork ribs and pumpkin gratin. To learn more, see the full press release at the end of this post.

Take a look at some images and video from the special opening night ceremony, which took place on September 13! 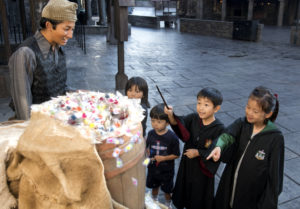 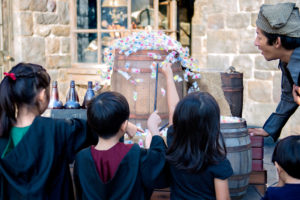 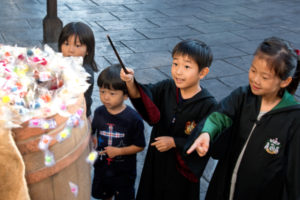 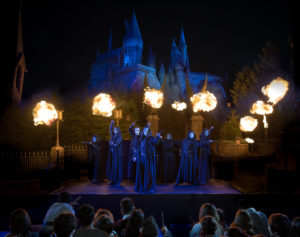 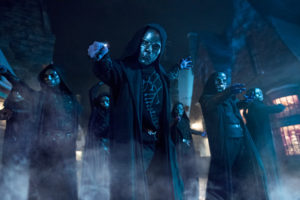 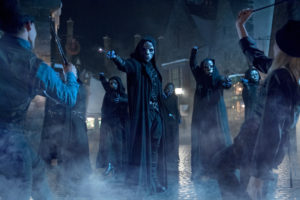 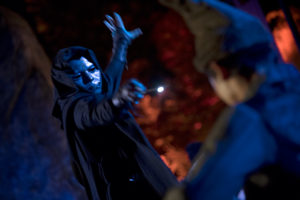 We certainly wouldn’t want to face those Death Eaters without our wands!

Tell us what you think about these new guest experiences and let us know your ideas for new experiences you’d like to see Universal tackle as part of WWoHP by leaving your ideas in the comment section at the end of the post!

A limited-time offering new kind of experience debuts for the first time ※ On September 14, 2016

Surprised and excited at the overwhelming power of the Dark Arts engulfing The Wizarding World of Harry Potter! The opening ceremony & the press preview held on September 13 (Tue), 2016.

This fall for a limited-time, Universal Studios Japan will offer Harry Potter fans a never-before-seen experience at The Wizarding World of Harry Potter from Wednesday, September 14, 2016 to November 6, 2016.

Guests will be deeply immersed in the world of Harry Potter through two new entertainment spectacles— “Death Eater Attack” and “Magical Trick or Treat.” At night, guests will experience “Death Eater Attack,” where Death Eaters, the purveyors of Dark magic, will descend on peaceful Hogsmeade and engage in an epic wand battle of awesome scale and highest quality with wizards. During the day, children will enjoy “Magical Trick or Treat,” a wondrous experience in the land. Prior to the grand opening tomorrow, September 14 (Wed), we held the opening ceremony today, September 13 (Tue), and approximately 200 specially invited Harry Potter fans witnessed the magnificent spectacle of Death Eaters descending.

At the opening ceremony, held at 7 pm today, sudden flashes of green light erupted over peaceful Hogsmeade, and the land was filled with an unprecedented level of tension and terror. When wizards noticed the extraordinary situation and rushed to the front of Hogwarts Castle, where invited guests had assembled, music and a dense fog enveloped the ceremony area. When the fog cleared, the guests saw the Death Eaters dressed in black robes appear. The Death Eaters continually and relentlessly performed the incendio spell that resulted in plumes of orange and red fire, filling the land in an increasingly tense atmosphere. Witnessing the Death Eaters descending right in front of them, the guests seemed greatly impressed by the entire experience of this spectacle. Their shouts of excitement and admiration suggested that they enjoyed becoming deeply immersed in the world of the Dark Arts, while being shocked at the anxiety and terror that they themselves felt at the Death Eaters’ overwhelmingly powerful magic.

The guests who attended the ceremony told us about their experience of shock and excitement, saying,

“I deeply love the Harry Potter movies, so I have come to The Wizarding World of Harry Potter a hundred times. Magical Trick or Treat is great for children, but it is also fun for parents. Also, I was really moved by the Death Eaters dark magic because of its overwhelming power. - (age: 20s/ Male/Osaka )

“I saw Death Eaters up close and got very excited. I enjoyed seeing the Death Eaters perform their Dark magic from the Harry Potter films for the first time.” - (age:20s/Female/ Hiroshima)

"I came here to see Death Eaters from Aichi. I screamed in terror and I was overwhelmed from the force of their Dark magic. I was moved because it felt as if I was actually in the movie.” - (age: 20s/Male and Female/Aichi)

In the afternoon, children experienced “Magical Trick or Treat.” When they cast a spell “Relashio” and waved their wands, a flood of candies cascaded out of stacks of cauldrons and barrels, so that all of Hogsmeade was filled with children’s whoops of joy and big smiles.

During the period of “Death Eater Attack” and “Magical Trick or Treat,” we will offer the “Halloween Dessert Feast,” a deluxe dessert selection inspired by Harry Potter and the Philosopher's Stone. Available at Three Broomsticks, the “Hallowe’en Dessert Feast” selection ranges from mountain-shaped chocolate ganache to carrot cake. We will also offer a special Halloween version of the immensely popular “Great Feast,” a mouthwatering assortment of dishes served on a platter. Special limited-time dishes include assorted juicy pork ribs, pumpkin gratin, and more. These fall specials will further immerse fans in the world of Harry Potter.

◆“Death Eater Attack” When night falls, peaceful and cheerful Hogsmeade will transform as Death Eaters, dressed in black hoods and masks, lurk in the shadows waiting to attack. Guests can experience the thrill and terror of coming face-to-face with the magical might of the Death Eaters, discovering an unprecedented feeling.