It’s been revealed that these e-book editions are making the leap to print – at least in France. The graphic designer posted an image on Twitter of the books, and the covers look just as brilliant and striking in print as they did online.

Looks like my Harry Potter e-book covers are making the jump to print in France?What a lovely surprise. I had no idea! pic.twitter.com/6Uz3hq2O6o

I still have the first Harry Potter book I read, age 11. Never imagined I'd see my own work on a cover. I'm tearing up a little. pic.twitter.com/Sk8jpHGrB4

The new French editions can be purchased here.

That’s not all! Following this revelation, Moss also announced that he had designed a new range of posters together with Pottermore. You can see the new minimalist 1950s-inspired posters below. 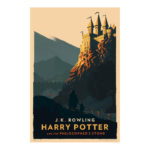 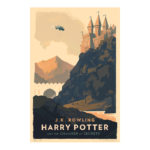 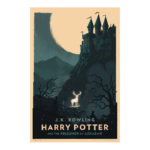 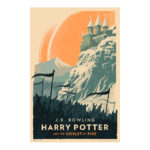 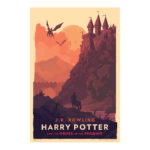 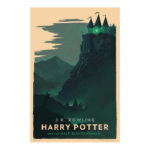 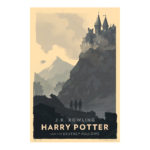 These new designs were commissioned for the German audiobook re-release, read by Rufus Beck. Moss spoke about the process and why he picked this particular style.

I was just a big fan of 1950s design, and it just seemed like a natural fit. I really liked the idea of Harry getting on a train and going somewhere exciting every year. There is something very British about that. That period of design – and obviously Harry Potter – is steeped in that imagery, and I wanted to bring those two things together.

The posters are currently available to pre-order at $50, with the full set available for $275. If you’re planning on ordering one of these posters, then make sure you do it sooner rather than later. Moss’s shop states that the posters

will be on sale until 3pm BST Monday 25th October. We will print enough posters to meet all orders.

Because this is a timed edition and production is based on the volume of orders, we won’t be able to start shipping these posters for about 2-3 months. Earlier orders will begin shipping first.

You can order the posters here until Monday, October 25.

Will you be ordering any of these posters? Which is your favorite? Let us know in the comments!