Our friends at King Ice graciously offered MuggleNet a review of their new officially licensed Fantastic Beasts and Where to Find Them collection. The collection includes four different styles, all offered in gold and white gold. Styles include an owl that seems to be inspired by the owl on the Woolworth building (where MACUSA is hidden); a rendition of the MACUSA phoenix emblem; a small triangle with the letters “MACUSA” and what looks like the design that lights up on President Picquery’s map as the Obscurus wreaks havoc around New York City; and the design I received to review, a small key with the MACUSA logo inlaid. 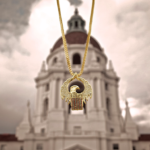 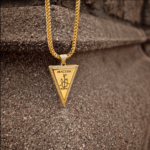 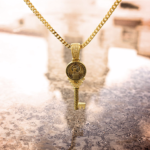 The MACUSA logo key style, which we reviewed.

The necklace arrived in a small square black box that contained a small leathery-feeling bag for protection. This, along with the padding inside the box, speaks volumes about the careful way this was packaged, which in turn speaks to the way the product was made.

To be perfectly honest, I probably wouldn’t classify these necklaces as my personal style. That being said, the necklace I received to review is a beautiful work of art and would be a fun accessory for anyone looking to add just a splash of Fantastic Beasts nerdiness into their daily wardrobe, or even just a little extra bling!

The first thing I noticed when I pulled out the necklace itself is that it is mostly chain. The style I chose was the gold key, and the chain was as bright a flash of gold as Harry opening his Gringotts vault for the first time. Plated in 14K gold, this should not be surprising! By the clasp is a small King Ice logo tag, but the lion is reminiscent of Gryffindor and adds to the charm of the entire piece. The chain is intricate and thick, at 24 inches long. When I put it on, it fell to about the middle of my chest but slipped easily over my head.

The key itself is about an inch and a half long and half an inch wide. At the top is the round MACUSA seal, complete with phoenix, flag, and “Magical Congress of the United States of America.” It all feels very grand and official nestled on a fan of spires inlaid with cubic zirconia. Along the sides of the seal are more gems.

One of my favorite parts of the design is the shaft of the key. There’s a curious mazelike pattern that runs along it, creating an intricacy that is absolutely beautiful. The quality of the piece is solid but not too heavy. Even the back of the key has details; a sunburst shape is opposite the MACUSA seal.

Overall, the necklace is a wonderfully made creation. It would surely look right in place with the glamor and gilded feel of MACUSA – perhaps even with the grandly dressed Percival Graves!

If you are looking for one of these necklaces for your own, why not enter our giveaway? Or head over to King Ice and check out their entire Fantastic Beasts collection!