With just a few short days until MuggleNet Live! this Friday, we’re back with another edition of MuggleNet’s weekly Casting News! (This week, we’re also providing you with plenty of updates from the new Strike miniseries, which premiered this past weekend on the BBC.) Let’s see what’s new!

Universal Pictures has begun principal photography on Mamma Mia! Here We Go Again. The film is a sequel to 2008’s Mamma Mia!, which was based on the musical of the same name. Dame Julie Walters (Mrs. Weasley) is reprising her role as Rosie in the film. Other cast members returning for the sequel include Meryl Streep, Amanda Seyfried, Dominic Cooper, Christine Baranski, Pierce Brosnan, Stellan Skarsgård, and Colin Firth. Mamma Mia! Here We Go Again “[will go] back and forth in time to show how relationships forged in the past resonate in the present,” and actress Lily James will portray Young Donna.

Composer John Williams will be featured during Boston College’s 25th Pops on the Heights scholarship gala, according to the university’s student newspaper. This year’s gala will be held on September 29, and Williams will appear alongside singer Jennifer Hudson, actor Chris O’Donnell, and the Boston Pops with conductor Keith Lockhart. The event is Boston College’s largest fundraiser.

Natalia Tena (Nymphadora Tonks) can be seen in a new still from her upcoming show, Wisdom of the Crowd, which premieres October 1 on CBS. Also pictured are actors Jeremy Piven, Blake Lee, and Jake Matthews. Eddie Redmayne (Newt Scamander) is the face of a new campaign for the luxury watch brand Omega, for which he serves as a brand ambassador. The campaign is being used to promote the 2017 Seamaster Aqua Terra, which is now available at retailers. WatchPro describes the timepieces as having a nautical influence.

The Aqua Terra aims to strike the balance between sophistication and ocean spirit. The 2017 collection features models with a teak concept dial reminiscent of the decks of luxury yachts running horizontally across the dial. 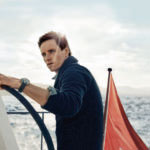 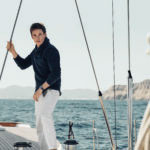 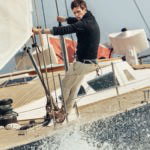 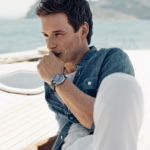 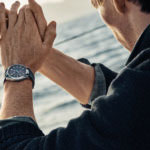 Producer David Heyman might be developing a thriller with screenwriter and filmmaker Tony Gilroy, according to a report from Variety.

The Warner Bros. project, formerly called ‘Methuselah,’ has been in the works since 2009 at Warner Bros. and had Tom Cruise attached at one point. Based on the character from the Bible, the story follows a man who lives for hundreds of years and has used his time to develop an incredible set of survival skills.

Yahoo! Movies UK has released an exclusive clip from the film The Limehouse Golem, which stars Bill Nighy (Rufus Scrimgeour).

Also on the subject of Strike, a piece from Radio Times reveals how actor Tom Burke was made to look as though he had an amputated leg for his portrayal of disabled veteran Cormoran Strike. Michael Keillor, who directed the first episode, explained the filming techniques he used. Drawing inspiration from the film Rust and Bone, Keillor used trick photography to achieve some of the illusion, and he also used a leg double when necessary. Burke himself also worked with a movement director and a man named Barney.

[Barney was] incredibly generous with his time, [and] had basically the same condition. And a day going upstairs, downstairs, sitting down, standing up. Sort of everything you could think of, trying to break it down to what one notices and what one doesn’t notice.

What’s on TV interviewed Burke about his role as Cormoran Strike. He elaborated on portraying Strike’s disability there.

Yes, I have a close relative with polio and I see a similar impact on their body so I wanted to get it right. I spent a day with a movement director, but also chatted to my body double and our adviser who both have the same injury. I spent a day practising walking up and down stairs and sitting down and standing up. You barely notice it when he’s walking, but if he has to go upstairs or run, he’s really in pain.

A new promo has been released for Jason Isaacs (Lucius Malfoy)’s upcoming CBS All Access series, Star Trek: Discovery. Posted by We Got This Covered, the promo features a voiceover from First Officer Michael Burnham (Sonequa Martin-Green).

We come from a tradition of tolerance, freedom, and justice; from a legacy of fearless exploration, of allies who respect each other’s differences, honor, and civilizations. We come on a mission to understand our world and ourselves better. We come in peace.

Isaacs, featured with Martin-Green and fellow costar Michelle Yeoh on the cover of Variety, is said to have signed on “because of the message the show sends in the Trump-Brexit era.”

The world is complicated and horrible, and I don’t know how to explain to my children the insanity of the people who are in charge of it at the moment.

I thought it was a good story to tell — and something I would be happy to watch — about presenting a vision of the world that’s full of drama but also full of resolution and unity. 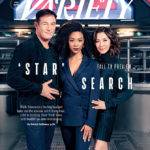 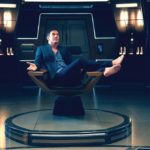 Domhnall Gleeson (Bill Weasley) has plenty coming up! The actor was recently interviewed for Metro, and two other sources have since reported on some of what he had to say.

Britain’s New! magazine reported on a thrilling experience that the actor had while filming American Made alongside Tom Cruise, which releases next month in the US.

I went up in the plane with him and Doug – and he put us in zero gravity for a second! It was amazing. I got to float in the air. And Tom wore the Aviators while he was flying, which made me extra happy. I know, I know (it was a true ‘Top Gun’ moment)! He didn’t put them (glasses) on for that reason but he had them on and he was piloting the plane. It was one of those moments.

Fashion.ie reported on how Gleeson discovered that his Star Wars character, General Hux, had been turned into an action figure.

I was in town the other day and I passed by the Forbidden Planet shop and inside was a Bobble Head figure of General Hux, and that made me amazingly happy, and I did ask my friend to buy it on my behalf. I was surprised they didn’t send me one!

He also spoke to Metro about a cause close to his heart.

Some of those people who sell autographs have gotten a bit angry at me because I only sign ‘Star Wars’ stuff for the hospice where my grandparents died. But some are very nice. They say, ‘That’s a cool thing.’

Yahoo! Movies has released an exclusive red-band trailer for another one of Gleeson’s upcoming films, Crash Pad. (Note that the trailer is age-restricted for mature audiences only.) The film itself is a romantic comedy, and it also stars Christina Applegate and Thomas Haden Church.

In director Kevin Tent’s film, Gleeson plays Stensland, a young man who finds himself bitterly disappointed to learn that the woman with whom he’s just had a one night stand (Christina Applegate’s Morgan) is, in fact, married. Moreover, she slept with him just to get revenge on her two-timing husband Grady (Thomas Haden Church). Making things far weirder, Grady responds to this situation by moving in with Stensland so the two of them can heal their equally wounded hearts by drinking booze, smoking marijuana, and bedding strangers — thus sending the proceedings into a twisted tailspin that, by the looks of the first trailer, will revolve around Gleeson’s perpetual awkward befuddlement.

Finally, the lineup for this fall’s Chicago International Film Festival has been announced, and one of the films set to be shown is Gleeson’s Goodbye Christopher Robin, according to the Chicago Sun-Times.

Specific screening dates are not yet determined, and the full roster is expected to be announced Sept. 19. All CIFF screenings are at AMC River East, and festival passes are on sale now at chicagofilmfestival.com.

That’s all for this week’s Casting News, but don’t despair! We’ll be back again next week! In the meantime, if you’re in the Orlando area, there’s still time to buy your tickets for MuggleNet Live! We hope to see you there!