“Harry Potter: A Cinematic Gallery” Is a Coloring Book Like No Other!

The first thing that struck me about the book was how large it was – and that it came with a hardback cover. I was expecting something small along the lines of other Potter coloring books I had seen. This book, however, is huge! In your hand, it has quite the weight (both literally and metaphorically), which definitely made me feel like my poor art skills should not be near it. The hard cover gives it a professional feel, and the beautiful color of the red ribbon bookmark adds to that. 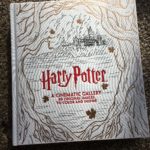 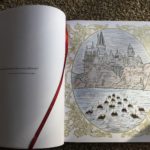 After opening the book, I was excited by the inviting images. The book is separated into images from each of the eight films. Many of them are familiar stills from posters or other promotional images, and some are stills straight from the films. Each image also has a special feature: gold-and-red foil embossing. From Harry’s first feeble Patronus to the windows of Hogwarts Castle, to the door to the Chamber of Secrets behind Ginny, the embossing adds a special flair to each image. 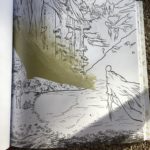 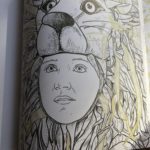 Another special feature of this particular book is the fold-out images. There are several throughout the book, from the entire Black family tree to the Great Hall after Gryffindor’s historic House Cup win to a Quidditch match. These fold-out pages are sure to be a challenge and a delight for anyone artistically inclined. 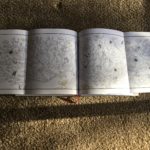 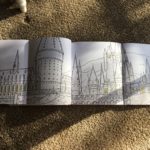 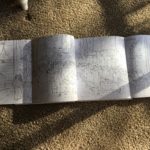 If you or someone you know is a fan of beautiful line art coloring books like this, Harry Potter: A Cinematic Gallery is a must-have. It makes a lovely coffee table addition, both before it is colored and after, and is a wonderful gift for this holiday season that you won’t want to miss.

This holiday season, fans of Harry Potter can escape to the wizarding world with this new illustrated coloring book. Following the massive success of the Harry Potter Coloring Book series, Insight Editions in partnership with Warner Bros. Consumer Products, is pleased to announce the publication of Harry Potter: A Cinematic Gallery (November 2017; $40.00), a deluxe line art book with exclusive illustrations of treasured scenes. Bursting with over eighty striking, all-new colorable images from all eight films—from Harry’s first-ever visit to Diagon Alley in Harry Potter and the Sorcerer’s Stone to the battle of Hogwarts in Harry Potter and the Deathly Hallows - Part 2—the book also includes several gatefolds, iconic quotes from all eight films, and a lavish cover embossed with gold and red foil. The Harry Potter universe is rich with visuals, and by allowing people to choose the colors of their favorite scenes from the epic films, this book opens up a world of coloring possibilities for fans. Harry Potter: A Cinematic Gallery is a must-have collectible for fans of all ages. About Insight Editions: Celebrated for its unwavering dedication to quality, Insight Editions is a publisher of innovative books and collectibles that push the boundaries of creativity, design, and production. Through its acclaimed film, television, and gaming program, Insight strives to produce unique books and products that provide new ways to engage with fan-favorite characters and stories. Under this program, Insight has published books covering the worlds of Star Wars, Game of Thrones, The Walking Dead, Destiny, Assassin’s Creed, Halo, Diablo, World of Warcraft, and the Harry Potter films, among many others. Insight’s award-winning art, photography, and sports titles celebrate the artistry and history of a wide-range of subjects that include the Rolling Stones, John Lennon, Kurt Cobain, Johnny Cash, the San Francisco Giants, and the Dallas Cowboys. Other divisions include a line of deluxe stationery products, as well as a children’s imprint, Insight Kids. For more information, visit www.insighteditions.com. About Warner Bros. Consumer Products: Warner Bros. Consumer Products (WBCP), a Warner Bros. Entertainment Company, extends the Studio’s powerful portfolio of entertainment brands and franchises into the lives of fans around the world. WBCP partners with best-in-class licensees globally on an award-winning range of toys, fashion, home décor, and publishing inspired by franchises and properties such as DC, J.K. Rowling’s Wizarding World, Looney Tunes and Hanna-Barbera. The division’s successful global themed entertainment business includes groundbreaking experiences such as The Wizarding World of Harry Potter and Warner Bros. World Abu Dhabi (opening 2018). With innovative global licensing and merchandising programs, retail initiatives, promotional partnerships and themed experiences, WBCP is one of the leading licensing and retail merchandising organizations in the world.