Seashells and Seaweed! MinaLima Release “The Little Mermaid and Other Fairy Tales”

As previously announced, everyone’s favorite graphic design duo, MinaLima, has released an anthology of Hans Christian Andersen’s fairy tales titled The Little Mermaid and Other Fairy Tales – and MuggleNet was invited to the launch!

The lavishly illustrated book, designed by Miraphora Mina and Eduardo Lima, features interactive design elements to bring the well-known stories to life in a new way. The anthology contains 12 stories, including “The Little Mermaid,” “The Tinder Box,” and “The Ugly Duckling” and is the fourth book to be released in their Illustrated Classics collection.

Held at the wonderfully quirky House of MinaLima in London, the launch had a distinctly oceanic theme with mermaids, colorful seashells, and coral decorations hanging from the ceiling and interspersed among the usual Potter prints. On the first floor of the exhibition, surrounded by front pages of the Daily Prophet, we were able to view some of the details of the new anthology such as pop-out pages or spinning snowflakes that accompany the beautiful illustrations. Miraphora and Eduardo were also on hand to chat about the anthology, their excitement for Fantastic Beasts: The Crimes of Grindelwald, and their hopes for the future of MinaLima. 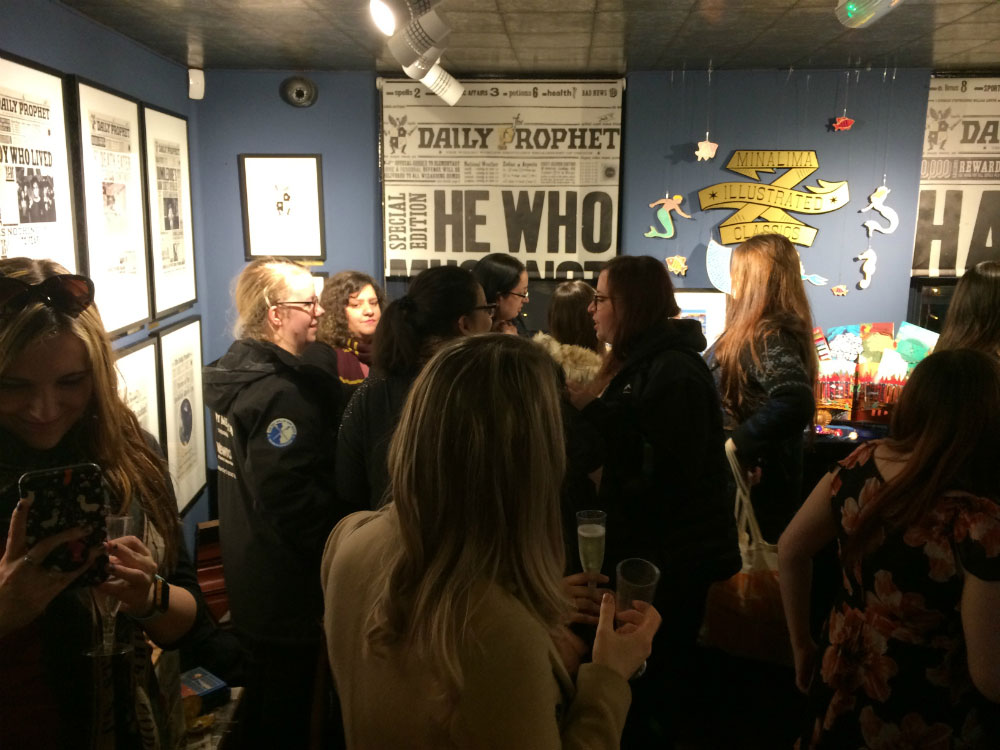 It was a packed house for the launch of MinaLima’s new illustrated classic. 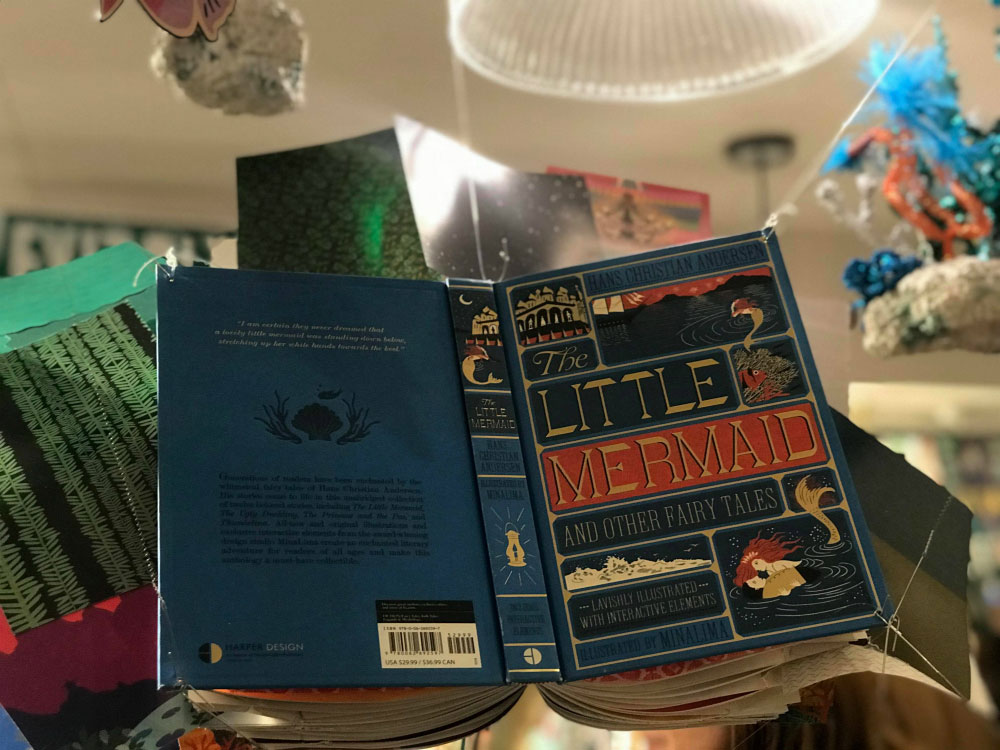 Copies of “The Little Mermaid and Other Fairy Tales” hung from the ceiling at the book launch. 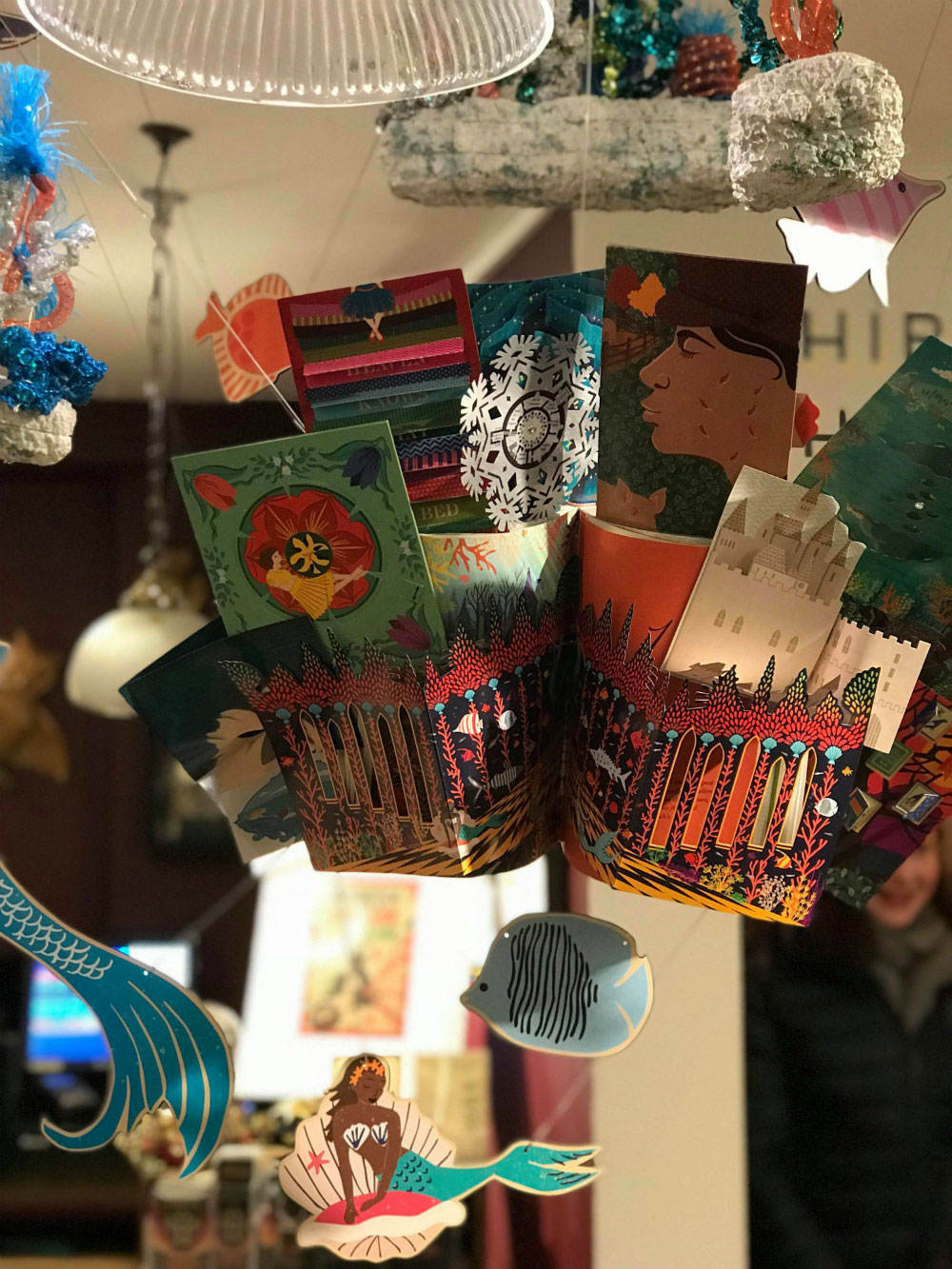 In true MinaLima style, the exhibition was decorated with pages from the book, shells, and mermaids. 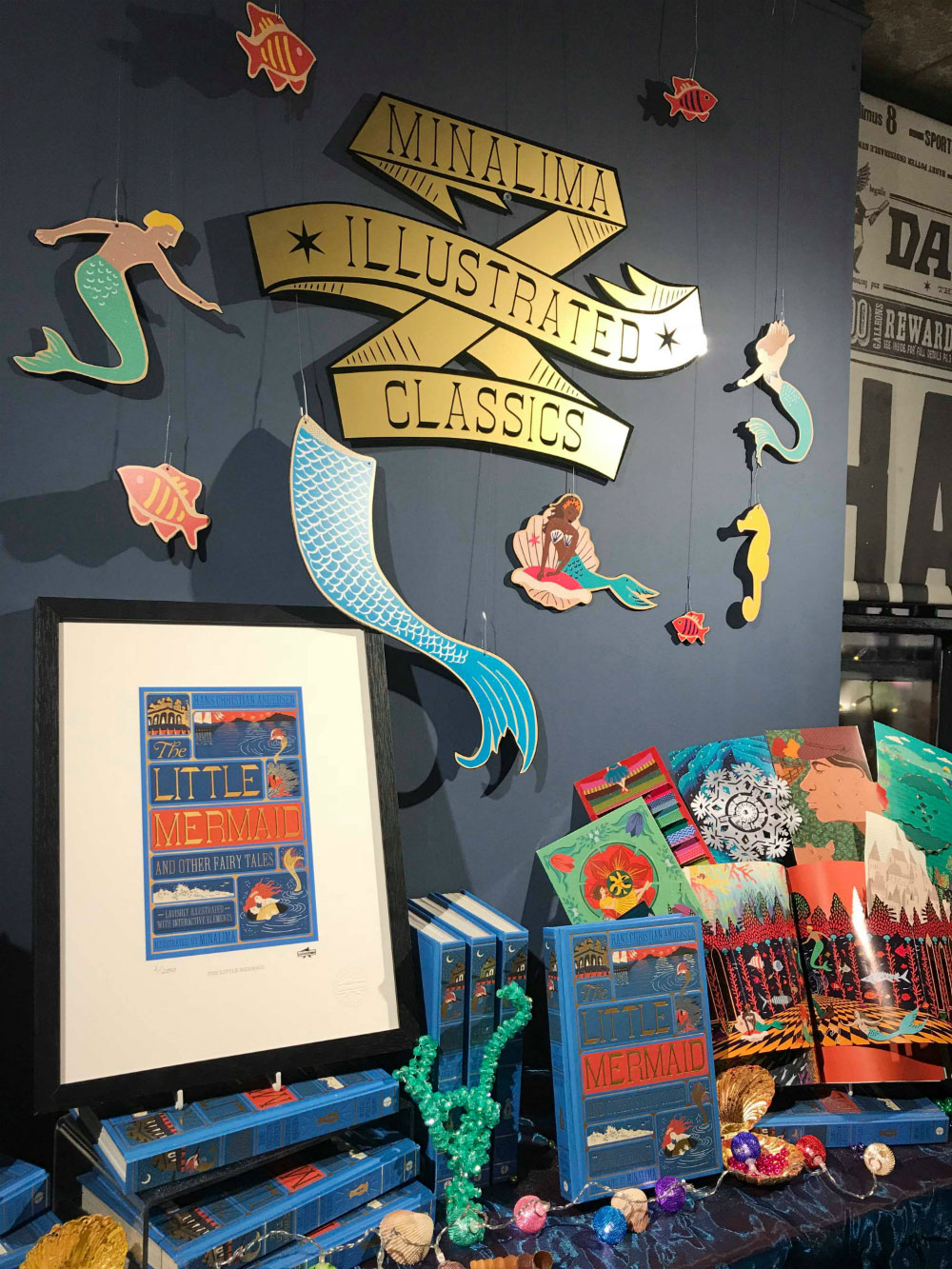 The exhibition had a special mermaid-themed display for the night, which was decorated with pages from the book, shells, and beads.

Both Miraphora and Eduardo chose “The Princess and the Pea” and “The Emperor’s New Clothes” as their favorite stories to illustrate because they are some of the more outlandish tales in the collection. However, they were careful to remind us that not all fairy tales have happy endings and that these original tellings often have darker elements than their modern counterparts. 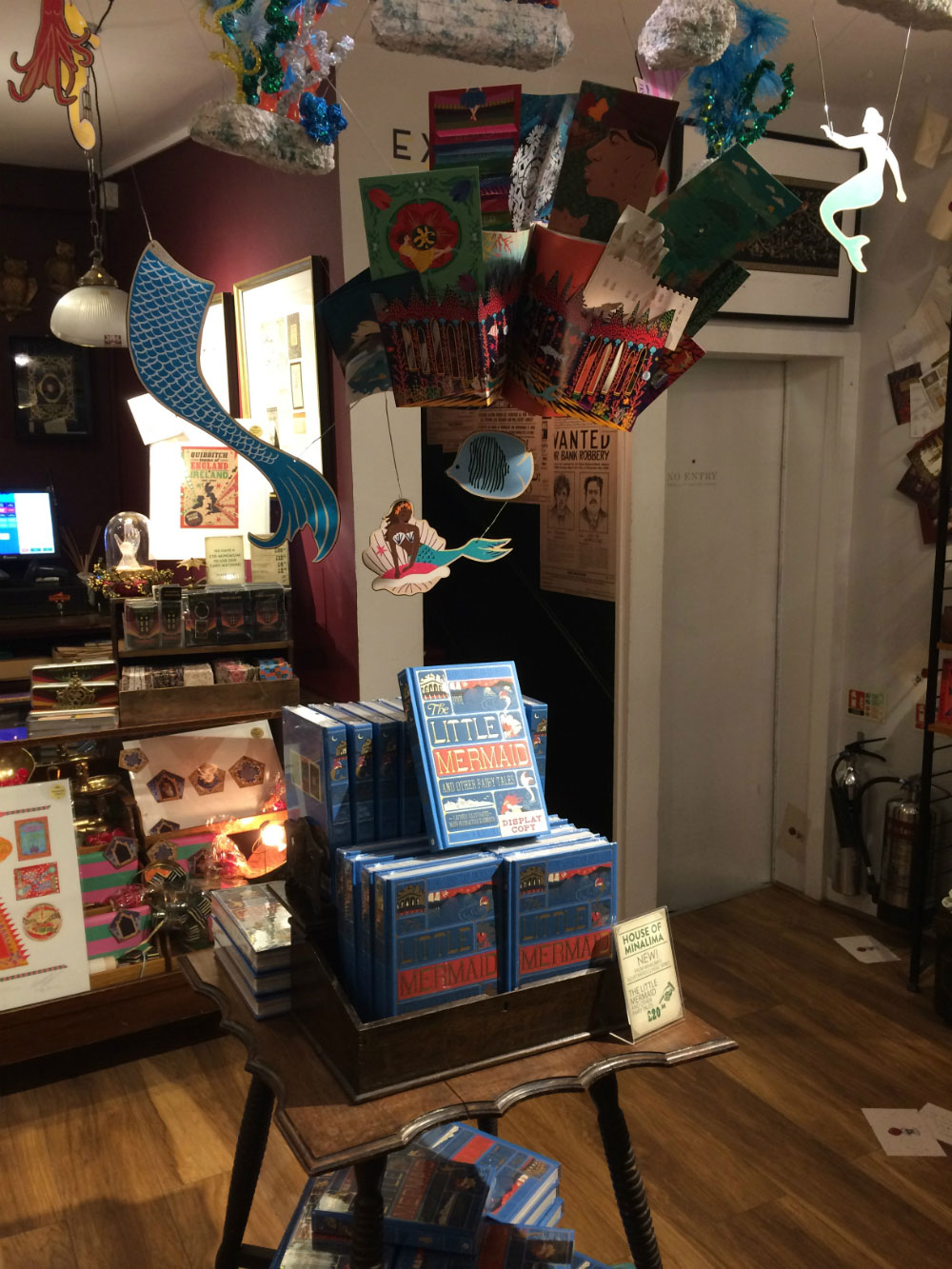 MinaLima launched their new illustrated classic “The Little Mermaid and Other Fairy Tales” at their London exhibition, the House of MinaLima. 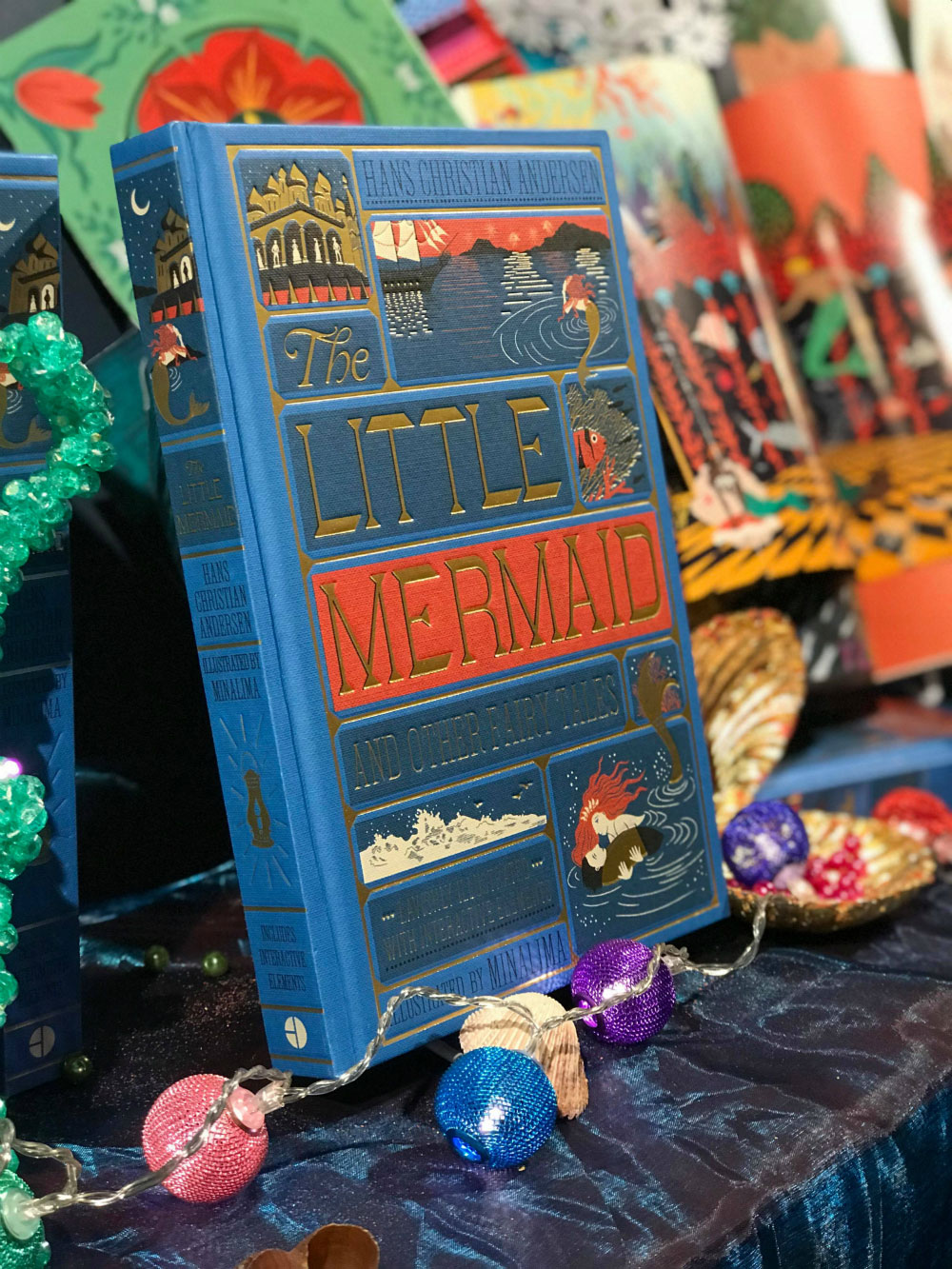 The cover of”The Little Mermaid and Other Fairy Tales”. 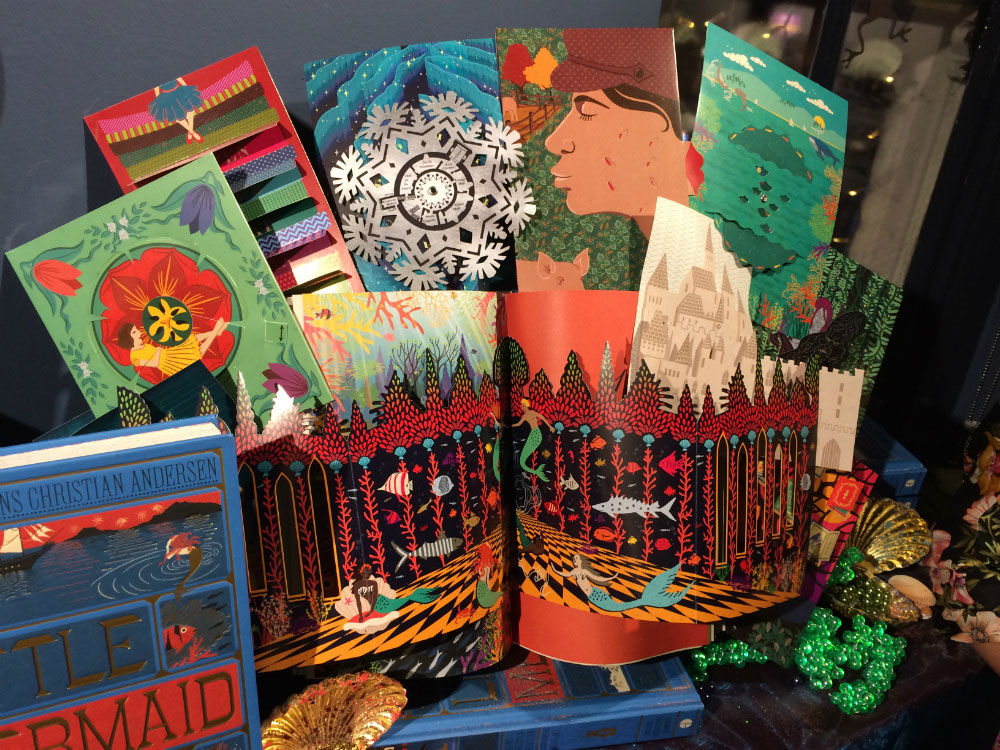 Some of the interactive feature of MinaLima’s new illustrated classic were on display at the launch.

The Little Mermaid and Other Fairy Tales is the fourth book to be designed by MinaLima, with a fifth (The Secret Garden) set to be released in July. These illustrated editions, along with their Collective Nouns collection, are part of a growing body of work for MinaLima, which extends beyond the wizarding world. With this in mind, the graphic design duo announced a change to the layout of the House of MinaLima, which they hope to be completed by the end of May. The top floor of the exhibition will be transformed to display all their non-Potter work, and the other two floors will become home to everything wizarding world related.

As their collection expands, MinaLima is constantly working on how best to showcase their work. After the announcement of the MinaLima pop-up store in Tokyo, we can’t wait to see what’s next for the graphic design duo, especially with the release of Fantastic Beasts: The Crimes of Grindelwald in November!

Take a peek inside The Little Mermaid and Other Fairy Tales below, and you can purchase a copy of the book here.