Okay, I think we can all agree that Tumblr has a habit of perfectly summing up the Harry Potter fandom and making you question everything you thought you knew, all at the same time. Personally, though, the best part of Tumblr is the spot-on analysis of the characters, including my favorite Weasley patriarch! Here are seven instances when Tumblr was just so accurate, it’s freaky.

No one in the Weasley family ever complained when Harry and Hermione came to visit, most especially Mr. Weasley. And we can never forget that time when Mr. Weasley had a world-famous wizard show up at his breakfast table, and his first question is about Muggle technology. 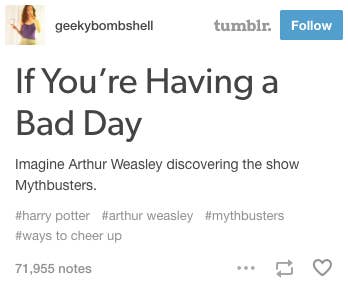 Frankly, I would just love to watch Arthur first discover a television in general. Can you imagine it? He would be equally amazed at Muggle technology and worried because he can’t see where the brain is kept. 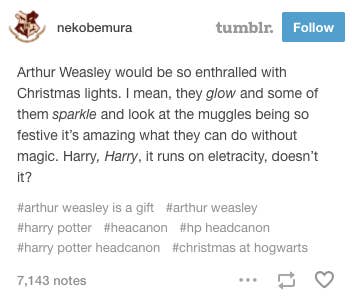 I 100% believe that one Christmas, Harry and Hermione took Arthur to a Muggle village and just let him loose, pointing out all the glowing lights and the inflatable snowmen.

Tumblr’s Take on Arthur’s Pride in You, a Muggle 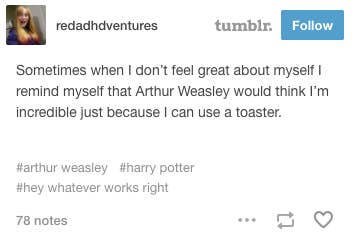 Honestly, this is so inspirational, it should be put on a T-shirt. Sure, Arthur Weasley may be able to magically extend cars or Disapparate on a whim, but he knows what is really important in life.

Tumblr’s Take on Arthur and the Internet I don’t know what I love more about this post: the fact that the Ministry actually adopted WiFi or that I can totally see Arthur doing this and then coming home to tell Molly all about what he learned that day. I don’t know about you, but this is exactly what I imagine Arthur Weasley would read in his spare time. I really hope he is annotating the books too, ready for the next time Harry and Hermione are over so he can ask them about it.

And Of Course, Tumblr’s Take on Arthur Weasley and the Infamous Question 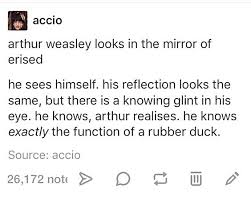 And once he finds out, I sure hope he tells me, because even after all my years of being a Muggle, I frankly don’t even know the true function of a rubber duck.

Do you agree with these Tumblr posts? Or do you think there is a better post? Feel free to share your favorites below!