Who doesn’t love a bit of Potter or Fantastic Beasts merch? When you find that special bit of memorabilia or swag that you just can’t pass up, it’s likely you’ll shell out those Galleons to take it home with you and show it off to all your friends. Purchasing items that represent your House is basically a full-time job, and now we bring you a chance to add to your collection – FOR FREE!

If you haven’t heard of Geek Gear before, now is the time to do a bit of research to see if this might be the subscription box you’ve been dreaming of. We think the best option, however, is checking out our review below and letting us be your World of Wizardry guides to merchandise nirvana!

Geek Gear’s World of Wizardry box ships worldwide every month from Scotland and features licensed Potter and Fantastic Beasts items from companies all over the world. Each month has a theme and each box is tailored to the person who subscribes. Boxes are available for children and adults and usually contain at least one clothing item in sizes from kids XS on up to adult 3XL.

Subscription prices for the World of Wizardry boxes are based on the number of months you would like to receive. You can purchase one month at a time for around £19.99 or a prepaid plan for 3-, 6-, or 12-month increments from £56.97 to £203.88. Joining the 12-month prepaid option will save you the most money, at £16.99 per month. If you want to forego all the merch and just get the clothing, there is an option for the World of Wizardry Wearable box at the same price, which features two shirts per month along with other wearable pieces like scarves, hoodies, jumpers, hats, and jewelry.

Additionally, once you receive your box, you can post a picture of yourself with your favorite merchandise to your social media accounts with the special Geek Gear hashtag #LOVEGEEKGEAR for an opportunity to win extra swag, including items from the Noble Collection and fully funded trips (including airfare, hotel accommodations, and spending money!) to London to visit Warner Bros. Studio Tour London – The Making of Harry Potter!

We’ve partnered with Geek Gear to review a new box every month and we’ll also have two boxes each month to give away to you, our awesome readers! Check out our reviews of the February and March boxes, and then make sure to enter for your chance to win one of your very own and sport your House pride!

Our giveaway will run from April 5 to April 18 and is open to readers worldwide. The winners will be contacted via email and a response will be required within 24 hours to ensure that the box will ship on time. If a response is not received within 24 hours, another winner will be chosen.

Now, on to our review of the February and March boxes!

Overall, I was really happy with this box. The T-shirts that came with it are absolutely beautiful! I wear my Death Eater one all the time. I also loved the framed "Undesirable No. 1" print and the Slytherin Head Girl and Head Boy pins. I'm definitely going to wear the Head Girl one to Potter trivia nights.

While I do love a good Potter recipe, I'm not much of a baker, so I wasn't as excited to see the recipe cards as I was to see some of the other items. But who knows? Maybe this will bring out the baker in me! 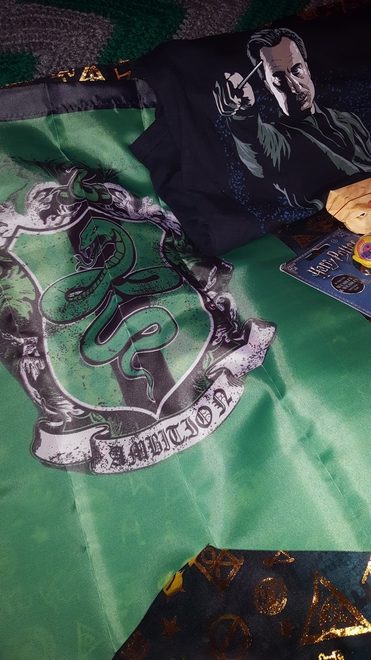 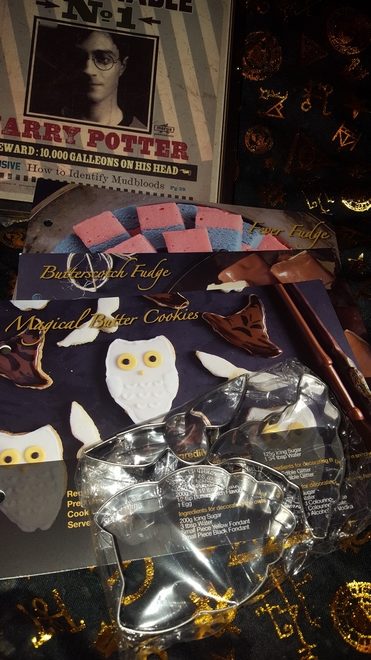 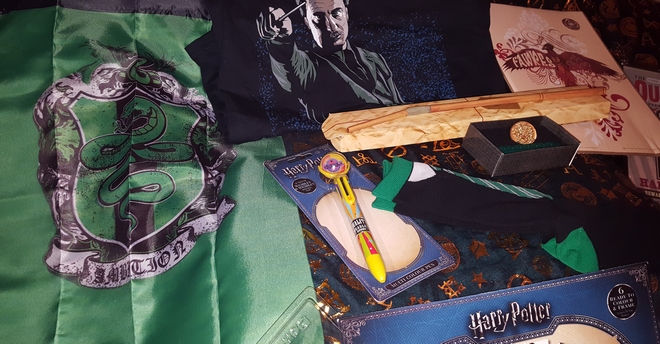 I loved the House themes since it really made it feel personal. I'm dying to make the chocolate frogs. They sound super yummy and the recipes look simple to follow. I was also surprised by the high quality and softness of the T-shirts; I had to control myself to not drop everything and put the Dobby one on immediately.

I was a bit concerned with the condition of my box and the way it was packaged. Both of my boxes came in very thin plastic bags with no cushion around them to ensure they made it to me from Scotland in one piece. Unfortunately, both of my boxes were damaged during shipping, which I wasn't really happy about. I suppose the good thing about these boxes is that you get a new one every month and they aren't really meant to be a collectible.

Getting past the packaging, I really enjoyed opening the box to find my House colors inside. Both the February and March boxes were stuffed to the max with goodies. The T-shirts were designs I hadn't seen before, and the Death Eater shirt was super colorful. The quality of the shirts was impressive - very thick, and they look as though they won't wear out easily.

There were some stand-out products for me in both boxes. In February's box were the recipe cards and the chocolate frog molds. Not only did you get the recipe for how to make the frogs, but also provided was a recipe for filling the molds with something other than chocolate! In March's box, I was thrilled to see House socks and even a wax stamp set that sported Slytherin's crest. 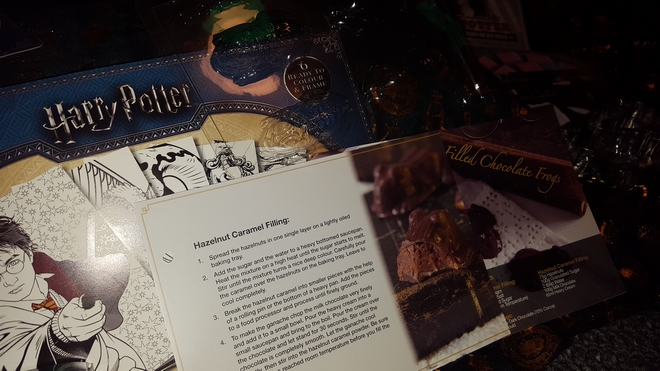 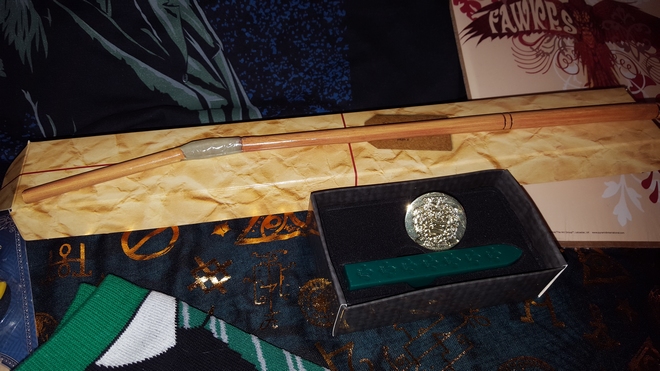 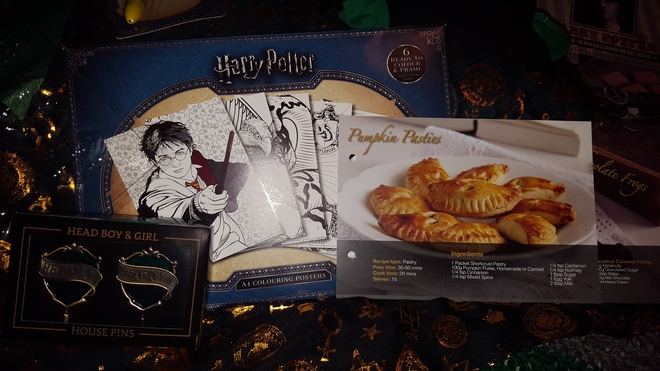 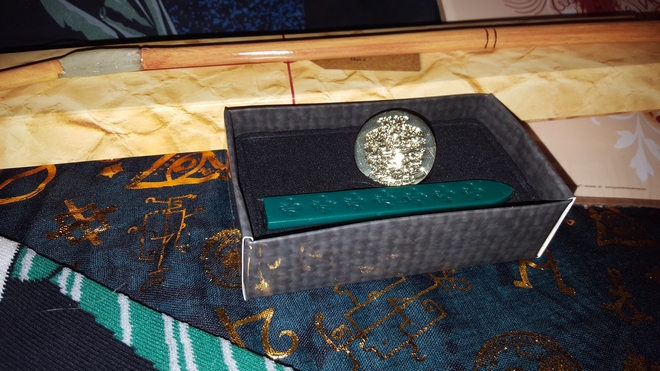 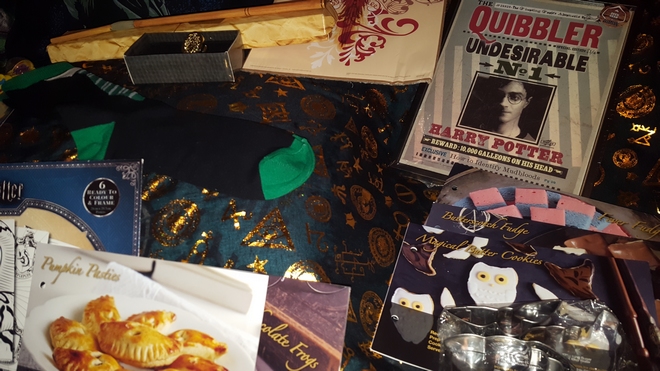 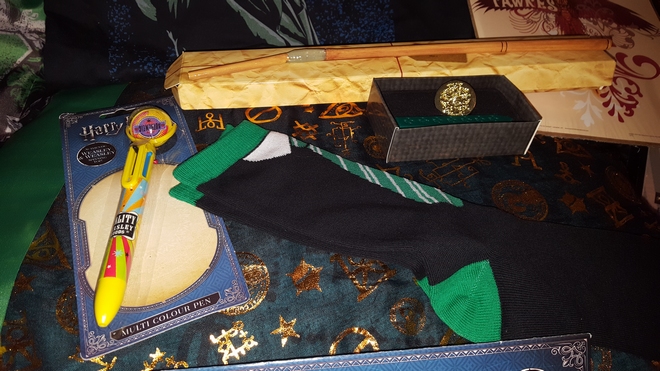 I'm also really obsessed with badges, so to have badges in both of my boxes was pretty much the best items Geek Gear could have sent me. All of the badges, the first set of the Head Boy/Girl pins and the second set of House clothing (a sweater, tie, and scarf in Slytherin colors), went to my Muggle job with me and are posted where all my colleagues can see them. Proud Slytherin in the house!

You can also take a look at past boxes to get an idea of what you might find in your first World of Wizardry box!

Now for the entry to our giveaway! There are lots of ways to enter, but only two lucky readers will win. Don’t delay – enter today!