If you could not already guess from your social media feed, no doubt full of long sappy messages about the beauty of friendship, today is National Best Friends Day! So today, we’re taking a look at some of the other important friendships in the Harry Potter novels, outside of the golden trio!

But seriously, though, these two are probably the most notable pair outside of Harry Potter, Hermione Granger, and Ron Weasley. Their friendship is important to not only the Potter series but also J.K. Rowling’s description of what it means to be a friend. For example, in Harry Potter and the Order of the Phoenix, when Seamus argues with Harry over the reappearance of You-Know-Who, Dean stood by his friend. This is very important because Dean’s dedication to Seamus was not because he specifically believed one side or the other, but because he was there to support him. Furthermore, Dean does so brilliantly, without alienating the others. 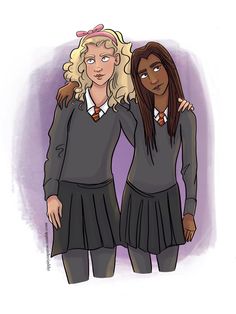 We first really get to see their friendship in Harry Potter and the Prisoner of Azkaban as Pavarti attempts to console a distraught Lavender after her pet rabbit dies. Not much is known about the girls, other than the fact that both girls were avid followers of Professor Trelawney. They were also members of Dumbledore’s Army from the start, even fighting in the Battle of Hogwarts. What we do know of this friendship, though, is that they seem to always stick together, bond over their shared interests, and work through the snide remarks about their love of Divination. You wouldn’t really know any of this, however, if you had just watched the movies. Now, I don’t mean to go on a rant here about the book-to-movie adaptions, but there is something to be said about skating over this very important friendship. In doing so, they skip over this example of strong female friendship.

I 110% believe these two are secretly best buds and no one can tell me otherwise! Sure, the relationship may have started as a professor-saves-expelled-student relationship, but after all those years, they undoubtedly became pretty close. In fact, they embody every facet of friendship. They know each other’s faults and secrets yet appreciate each other nonetheless. For example, Dumbledore comforts Hagrid after Rita Skeeter reveals the latter’s giant parentage. He even confides in Hagrid, telling his friend that he, too, had received plenty of criticism and cruel comments but that the key was to ignore them and keep living your life. In addition, there is an unwavering devotion on both sides. Hagrid’s devotion to Dumbledore is evident from the first time we meet him, but just like Dumbledore’s love for pretty much everyone, Dumbledore’s care for Hagrid is a bit more low-key. It can be seen, though, in actions such as protecting Hagrid or offering him the job of Care of Magical Creatures professor.

If the novels have taught us anything, it is that the idea of friendship comes in many forms and these three examples really demonstrate this. Do you agree or do you think there are more important friendships in the novels? Tell us in the comments below!