MuggleNet attended the opening-night gala of the new Harry Potter: A History of Magic exhibition at the New-York Historical Society (NYHS). We had the privilege of hearing from executives from the organizations that brought this exhibition to life. The event opened with a welcoming remark by the New-York Historical Society CEO and president, Louise Mirrer, followed by brief speeches by Jamie Andrews, who is the head of culture and learning at the British Library (which previously hosted the exhibition); Billy DiMichele, Senior VP and Head of Creative Development at Scholastic; and John Harrobin from Audible. One quote from the night really captured the essence of what this exhibition is all about. Jamie Andrews touched on the importance of “telling stories from the past and using collections from the past to tell stories for the present, for new audiences.” Harry Potter: A History of Magic strives to make connections between historical artifacts and the story of Harry Potter. By connecting history to a story that is beloved by people of all ages, the British Library hopes to shed new light on the historical relevance of Rowling’s books.

Andrews finished his speech by thanking the many people involved in the creation of this exhibition before passing the microphone off to Billy DiMichele.

Scholastic’s DiMichele noted that he is “thrilled to be partners with [the] British Library and with the NYHS for this spectacular exhibit[ion].” Scholastic’s mission, according to DiMichele, is to “instill a lifelong love of reading in children and to help explain the world in order for children to discover their own potential.” Harry Potter: A History of Magic addresses this exact mission:

In one of the most imaginative worlds ever created, Harry Potter, Jo Rowling’s groundbreaking Harry Potter series, has done both: transporting millions of children all over the world into readers while being a beacon of hope. This extraordinary exhibit[ion] brings her magical and inspirational world to life so compellingly.

Scholastic has also been involved in the creation and publishing of a companion book. The book includes beautiful artwork by Jim Kay from the illustrated editions as well as art that has never been published before by Mary GrandPré. In addition, it includes information on all of the historical artifacts featured in the exhibition. Most interestingly, the book includes original notes and drawings and early drafts from Rowling. We have a copy of the book and we’re in love with every page of it. You can get your copy here!

While Scholastic put together the companion book, Audible worked on an audiobook. John Harrobin from Audible discussed the creation of an “unforgettable listening experience.” The Harry Potter: A History of Magic audiobook is narrated by Game of Thrones actress Natalie Dormer and brings you through the history of magic, both in the real world and in Rowling’s wizarding world. The audiobook also includes performances by Stephen Fry and Jim Dale, the first ever program to include both in one place. Get your copy of the Harry Potter: A History of Magic audiobook here. Audible has also created an audio tour to listen to while going through the exhibition. The tour is available here. 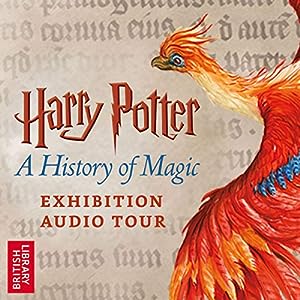 After the speeches were completed, we were given the privilege of walking through the exhibition. We spent so much time painstakingly looking at each element of the exhibition that we actually got kicked out because it was closing! To learn more about what the exhibition showcases, check out our review here!

The New-York Historical Society’s Harry Potter: A History of Magic exhibition runs until January 27, 2019. Tickets are $21 for adults, $16 for seniors (65+), $13 for students, $6 for children ages 5–13, and free for children under 4. Get your exhibition and programming tickets here!