Harry and the Potters Explore Power and Surveillance with “The Trace”

In April, MuggleNet reported that wizard rock band Harry and the Potters were set to release Lumos, their first full-length album in 13 years. While there is still over a month until Lumos drops, we have our first glimpse into the album’s sound with the first single, “The Trace.”

As the title suggests, the new single puts a spotlight on the Trace, a charm used to detect magic used by underage witches and wizards. But for wrockers and fan activists Harry and the Potters, the charm isn’t just about keeping the order in the wizarding world but an example of a culture of surveillance by authorities.

Speaking to BrooklynVegan, the band discussed the idea that a culture of surveillance can become further entrenched and misused by those in power.

In times of peace this might be deflected as a not-particularly-threatening overreach of power, but as we attempt to say in the song, this culture of surveillance opens the door to misuse and abuse when a ruling class is set on restricting the power of others. We see this when Voldemort seizes power and his regime institutes a more aggressive police state through new surveillance tools like the Taboo, which tracks the use of specific words and can lead to the arrest and detainment of their speaker.

For Harry and the Potters, “The Trace” has been written with the current political climate in mind.

In particular, the band has spoken about the parallels between the Trace and“the way communities of color and immigrants are surveilled and policed” as well as the monitoring of Web activity “as a means of influencing our thoughts and behaviors.” 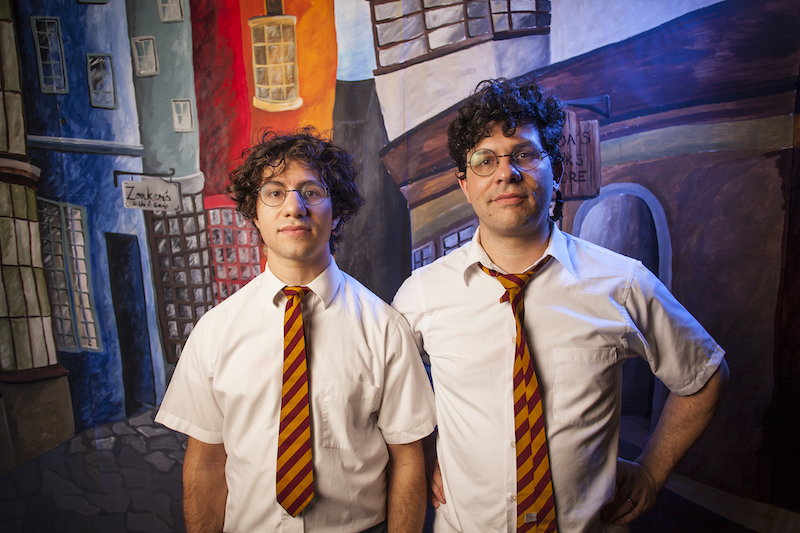 Joe and Paul DeGeorge have been performing as Harry and the Potters since 2002 and will release their fourth full-length (and most political) album, “Lumos”, in June 2019.

This new single is a snippet of what fans can expect from the new album. The band hopes Lumos, described as “an album for this political moment,” will encourage discussion around the issues society is facing today.

It’s an opportunity to connect the dots: the systems facilitating oppression in the wizard[ing] world – state-run media, children being separated from their mixed-blood parents, surveillance systems, and pure[-]blood supremacy – strongly echo the daily reality of creeping neo-fascism [sic].

And the political discourse doesn’t stop there.

According to Harry and the Potters, this new album will offer something different to each generation of Potter fans. For those who grew up with the boy wizard, there is a reminder of hope and a call to action.

For the generation of Harry Potter fans [who have] grown up into a world where cartoonish villains occupy the halls of power, it’s a reminder that there is a pathway forward. Now is the time for Dumbledore’s Army, for the Order of the Phoenix. We are being called upon to become the heroes that this moment necessitates.

For those younger fans just discovering the series, Paul DeGeorge told Rolling Stone that he hopes topics covered in the songs will lead to discussions about those issues.

We’re hoping that parents and their young kids might see us play at the library, hear a song explicitly critiquing pure[-]blood supremacy and then later have a real discussion about white supremacy and how it manifests in their own lives.

With lyrics such as “I know what they’re looking for, I know why they’re listening. Breeding fear and mistrust is part of their thing” in the new single, it’s clear that Harry and the Potters are ready to start a political conversation!

Check out the full music video for the “The Trace” below, and head to the Harry and the Potters website to catch the band on tour this summer.

HARRY AND THE POTTERS ANNOUNCE THEIR FIRST NEW ALBUM IN 13 YEARS: LUMOS - OUT JUNE 21st

The pioneers of wizard rock return with a double LP chronicling the all-too-relevant events of the seventh Harry Potter book, Harry Potter and the Deathly Hallows.

"The Potters specialize in lo-fi indie rock, sung from the perspective of the protagonist, played by both [Paul] DeGeorge and his brother Joe. Musically, they take cues from the nerdy meanderings of They Might Be Giants and Magnetic Fields, adding on silly lyrics sourced from the books’ plot lines."
-Rolling Stone

" ...a gimmick, a daydream, and a beautiful geeky power-fantasy all wrapped in one... they wrote music about what they adored, they had no fear, and along the way, they fostered a beautiful thing." VICE's Noisey

On June 21st, wizard rock pioneers Harry and the Potters (Paul and Joe DeGeorge), will release their first full-length album since 2006: Lumos. Using the magic of rock and roll, it chronicles the events of the seventh and final Harry Potter book where J.K. Rowling’s teen wizard and his friends are on the run from a xenophobic, authoritarian regime and must work diligently to take down a [D]ark wizard who capitalizes on fear and emboldens supremacist wizards. In other words, the subject matter of Lumos is extremely relevant. Harry and the Potters will embark on their first national tour of libraries since 2011 in support of the new album.

Lumos is an album for this political moment. For the parents raising a younger generation reading these books for the first time, it’s an opportunity to connect the dots: the systems facilitating oppression in the wizard[ing] world – state-run media, children being separated from their mixed-blood parents, surveillance systems, and pure[-]blood supremacy – strongly echo the daily reality of creeping neo-fascism [sic]. For the generation of Harry Potter fans [who have] grown up into a world where cartoonish villains occupy the halls of power, it’s a reminder that there is a pathway forward. Now is the time for Dumbledore’s Army, for the Order of the Phoenix. We are being called upon to become the heroes that this moment necessitates.

Paul DeGeorge tells Rolling Stone, “we’re hoping that parents and their young kids might see us play at the library, hear a song explicitly critiquing pure[-]blood supremacy and then later have a real discussion about white supremacy and how it manifests in their own lives.”

These are wizard fight songs, but there are also songs about riding dragons, magic pictures of cats, and using cool spells while camping. There is even a platonic friendship power ballad duet with Kimya Dawson, who makes a special guest appearance as Hermione Granger. Truly there is something here for the whole family – especially if the whole family is invested in defeating Voldemort.

1. Lumos
2. You’re Not the Wizard
3. Good Riddance (Privet Drive)
4. The Trace
5. On the Importance of Media Literacy Under Authoritarian Rule
6. Hermione’s Army
7. What Happened to the Cat?
8. The Banality of Evil (Song for Albert Runcorn)
9. Gone Campin’
10. Where’s Ron? (featuring Kimya Dawson as Hermione Granger)
11. No Pureblood Supremacy
12. Voldemort in Your Head
13. The Sword, the Cup, and the Dragon
14. The Cloak
15. The Stone
16. The Wand

Tour dates (More to be announced):

About Harry and the Potters:

Harry and the Potters are the first wizard rock band. They play songs exclusively about the Harry Potter books. The band consists of brothers Joe and Paul DeGeorge. They grew up in a suburban Boston house that has a cupboard under the stairs. Since 2002, Harry and the Potters have performed over 800 shows in libraries, rock clubs, art spaces, bookstores, basements, and all ages venues all over the world. Their high-energy live show has become legendary. Pitchfork placed the band in their Best Live Shows of 2005 list noting, "the greatest rock and roll tour of the year took place this past summer in public libraries across America… The Decemberists wish they could lit-rock like this.”

Inspired by equal parts Fugazi and They Might Be Giants, Bruce Springsteen and Negativland, the band continues to occupy a bizarre niche that brings their DIY punk ethos to the fandom of a mainstream cultural phenomena [sic]. Their commitment to playing all ages shows has meant extensive touring in unconventional spaces like libraries (where a large number of teens and pre-teens undoubtedly saw their first concert ever). As fandom and convention culture has gone mainstream – and in the process become increasingly corporatized – over the past decade, it feels refreshing to see a free Harry and the Potters show at the local library.

The band helped co-found the pioneering fan activist organization [t]he Harry Potter Alliance and were profiled in the 2008 documentary We Are Wizards. With their annual Yule Balls (2005-present) and the Wizard Rock EP Club (which released albums from over 30 different wizard rock bands between 2007 [and] 2009), the band has raised over $100,000 for the Harry Potter Alliance and other literature-related charities.

In 2019, they will release Lumos, their first full-length album in over a decade, and will embark on an extensive summer tour of libraries across the United States.