Review and Giveaway: Win the “HOGWARTS EXPRESS™” with Free Hogsmeade Caroler Figurines from The Bradford Exchange!

The Hogwarts Express is no ordinary passenger train. When young witches and wizards board the crimson no. 5972, they cross over the threshold of adventure to a school where they will learn to use magic! For generations of Hogwarts students, the train ride to school is an honored tradition. For Harry, the trip to Hogwarts meant an escape from the Dursleys and a reconnection to the sense of belonging he felt in the wizarding world. Muggles like me dream year after year that we’ll get our Hogwarts letter and begin our magical journey on the Hogwarts Express from Platform 9 3/4.

While we wait for that fateful owl, the Harry Potter Illuminated Village collection from The Bradford Exchange helps capture the imagination of what Hogwarts might look like on Christmas Eve! The “HOGWARTS EXPRESS™” with free Hogsmeade caroler figurines is the fourth set in the collection and features a brilliantly painted replica of the locomotive.

The set also includes a matching red bench where some students have seemingly left their Hogwarts trunks behind in the snow! Streetlights illuminated with a painted yellow flame light the evening for three Hogsmeade carolers dressed in black robes and pointed hats.

“HOGWARTS EXPRESS™” from The Bradford Exchange, side view 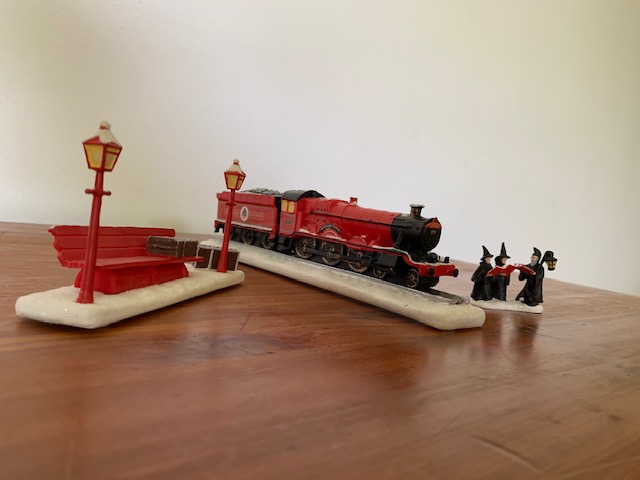 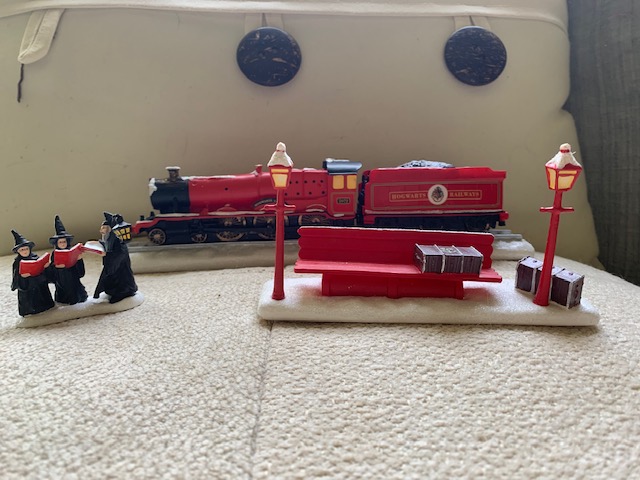 The “HOGWARTS EXPRESS™” figure was hand-painted with careful attention to detail. A side-by-side photo comparison shows me the artist did well to honor the iconic image of the train: Even someone who has only heard of Harry Potter will instantly recognize it! The crimson steam engine rests on a silver track in sparkly snow. The keener-eyed fan will recognize the perfect detail of the Hogwarts crest emblazoned on either side of the tender and the lettered “Hogwarts Castle” on the side of the engineer’s cab. The “HOGWARTS EXPRESS™” with Hogsmeade carolers and a train station bench displayed in front of the “Harry Potter: A History of Magic” book, Chapter 1, “The Journey,” showing an illustrated scene of Harry arriving at Platform 9 3/4 and walking alongside the Hogwarts Express

While I was initially surprised that a few passenger cars are not included, I suppose it makes sense that the “HOGWARTS EXPRESS™” would be settled into the station for the Christmas holiday. This installment of the series requires no assembly and fits snugly in its styrofoam packaging when not on display. While it’s a rather simple figure, it doesn’t need any frills to stand as a classic representation of the beloved train. The “HOGWARTS EXPRESS™”, with Hogsmeade carolers and train station bench, in its protective packaging

Fortunately for the students who decided to stay at the castle over the holiday, it looks like it will be a white Christmas morning at Hogwarts! Glittery snow provides a base for each part of the three-piece set and collects in delicate dustings throughout the scene. It’s a charming detail, and it really sparkles! The “HOGWARTS EXPRESS™” with Hogsmeade carolers and a train station bench, on display in the sunlight

The vividly red “HOGWARTS EXPRESS™” is undoubtedly festive on its own, and the accompanying three Hogsmeade caroler figurines bring additional Christmas cheer. They carry with them a lantern and three huge songbooks. It makes me wonder what Christmas carols are inside that bright red book cover. Does Mariah Carey’s “All I Want for Christmas Is You” hit number one year after year in the wizarding world like it does in the Muggle world? 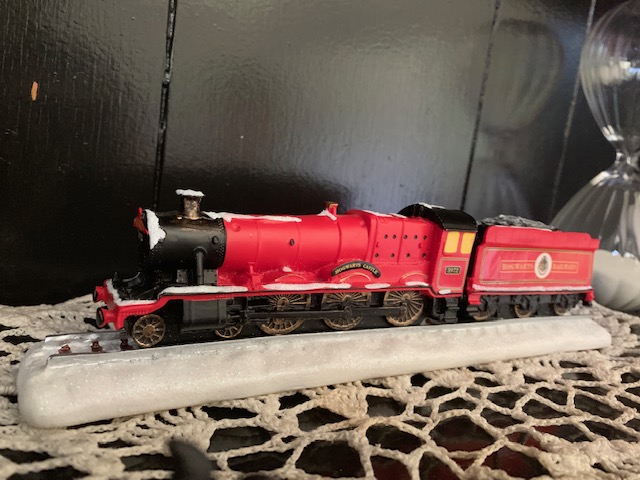 “HOGWARTS EXPRESS™” from The Bradford Exchange 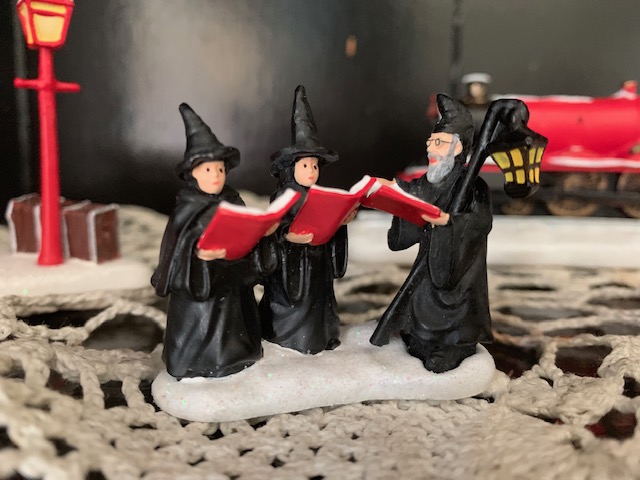 Hogsmeade carolers from The Bradford Exchange

While Harry Potter books and movies can be enjoyed all year long, I know that personally, it just feels right to revisit the story around Christmastime. Images of yuletide cheer and gorgeous winter landscapes at Hogwarts make me want to go there even more! The Harry Potter Illuminated Village collection from The Bradford Exchange truly Accios the magic of the holidays right to your living room. Other sets in the collection include a stunning replica of Hogwarts Castle, Honeydukes Sweet Shop, and figurines of Harry, Ron, and Hermione. Some pieces within the set even light up – with a little “magical” help from batteries.

Currently, there are five announced sets in the Harry Potter Illuminated Village, with more issued each month. As a collector subscribed to The Bradford Exchange’s subscription plan, the entire Illuminated Village collection is reserved for you, which means regular deliveries of each new set and no increase in price! New sets are billed and shipped separately approximately every other month, once your previous bill has been paid in full, and you can cancel your plan at any time with no obligation. Here are the five sets that have been announced so far:

We have three sets of the “HOGWARTS EXPRESS™” with free Hogsmeade caroler figurines to give away. Our contest starts on June 6 and will end on June 20 at 11:59 p.m. ET. Winners will be contacted via email after the contest ends and will be given 24 hours to respond and claim their prize. If no response is received within that time frame, another winner will be chosen, so make sure you are checking your spam and junk folders in case our notification email goes astray!

A review set of the Harry Potter Illuminated Village “HOGWARTS EXPRESS™” with free Hogsmeade caroler figurines was provided to MuggleNet by The Bradford Exchange. All opinions belong to the reviewer.

In third grade, my teacher told me Harry Potter was from the devil, so naturally, I have been obsessed with the books ever since. I'm a Gryffindor, a Leo (like J.K. Rowling), and I work at a boarding school (like Hogwarts). I write hot takes on the wizarding world from the Blue Ridge Mountains of North Carolina.