Hagrid’s Magical Creatures Motorbike Adventure, the newest addition to the Wizarding World of Harry Potter at Universal Orlando Resort, opens to the public today, June 13. We had the opportunity to experience the ride early, and we’re still in a daze from the speed, intensity, and artistry of the attraction.

At 5,053 feet long (that’s nearly a mile!), Hagrid’s Magical Creatures Motorbike Adventure is the first story coaster in the world, has the first free-fall vertical drop in the country, and is the longest roller coaster in the state of Florida. Over 1,200 live trees were planted for the ride, which reaches speeds of up to 50 mph. While these facts are impressive by themselves, this is just the beginning of what makes this attraction so exhilarating and incredible. As Hagrid takes his Care of Magical Creatures class on a special trip into the Forbidden Forest on his signature motorbike with attached sidecar, the coaster zooms, swerves, dives, and soars through ruins, over water, into a dark cave, and past animatronic beasts. Most of the creatures are recognizable from the Harry Potter films, but one creature in particular is making its first appearance outside of the books. During and between animal encounters, prepare for more launches than any other roller coaster in the world. Despite the sudden acceleration, careening, drop, and backward motion, the ride is not jerky, but swift and smooth.

Of course, such a thrilling ride requires lockers, which are provided free of charge before entering the queue. The trains, which seat 14 people each, are loaded via a moving walkway. Just before you get on the ride, you will be asked your preference between the motorbike and the sidecar. In each pair, the person riding in the motorbike seat must first climb over the sidecar seat, but there’s plenty of room to do so. Both vehicles are equipped with the same restraints and have the same seat style (similar to Harry Potter and the Escape from Gringotts). The only difference between the two is the height, with the sidecar about 6 inches lower than the motorbike. The motorbike is equipped with functions such as lights, blinkers, and a horn, but these are all for show rather than interactive. A big purple button does light up and can be satisfyingly pressed even though it has no effect. You can hold on to the restraint on your lap or lean forward and grab those handlebars if they happen to be within your reach. This position really provides the sensation of steering the bike yourself, even though such control is thoroughly out of your hands. We were able to ride twice, once during the day in the penultimate row and once at night in the front row, switching off between the motorbike and sidecar. If you’re a little nervous about roller coasters, the sidecar might be a better place to start, but if you want the ultimate thrill, go for the motorbike and try to sit as close to the front as possible. However, both vehicles make for an equally unforgettable ride, which was designed around the sidecar to make sure you’re not missing out on anything no matter where you’re sitting. If you have the opportunity to ride this coaster after dark, we strongly recommend it. The Forbidden Forest setting becomes more realistic, and it adds an extra element of suspense. A headlight on the motorbike illuminates the track so that you can still see right in front of you, but the upcoming path is shrouded in darkness, just like the spooky forest. If every trip into the Forbidden Forest were this exciting, you’d be asking for detention daily.

If you want to know exactly what to expect along the ride, check out our detailed walk-through below. Check out our other review for more information about the ride’s immersive queue.

Once you reach your seats and have settled into your motorbike or sidecar, you're ready to go on your adventure! The train slowly rounds the first corner as Hagrid tells you not to mind the Thestrals, which are, of course, invisible to all who have not seen death. Shortly thereafter, the train accelerates in a wild ride through the Forbidden Forest and over a water element before slowing down for a story moment on your left featuring the first Blast-Ended Skrewt, which an animatronic Hagrid voiced by Robbie Coltrane chastises for sending some hot mist your way. After this, you're off again, hurtling through the tracery window at 40 mph before coming to a stop. A few moments later, the train accelerates in another wild ride, shooting by a growling Fluffy and passing a group of Cornish pixies hovering around the Ford Anglia. You shoot down through the mist and sharply up again (65 feet up at a 70-degree angle), but you run into some trouble with your motorbike! The dragon fire sputters out and your entire train falls backward, picking up in speed as it flies back past those mischievous Cornish pixies. The natural velocity from the 65-foot drop is followed by an additional acceleration, slowing down as you pass a centaur on the right and into a darker cave. Unfortunately, the walls and ceiling are covered in Devil's Snare. Were you paying attention in Herbology? Lucky Hagrid was! He urges you to repeat after him: "Lumos Solem!" And just like in the film version of Harry Potter and the Sorcerer's Stone, the Devil's Snare releases you, and the entire train drops 17 feet below, where you encounter the missing Skrewts. The drop is sudden but is over before the screams die. Luckily, you're able to accelerate out of there before you get blasted by the creatures, slowing down with enough time to pass by a white unicorn mare and her gold foal just before the end of the ride.

The gallery below features images of the track taken from the entrance to the queue. As you can see, it winds and twists around the ruins in the forest. 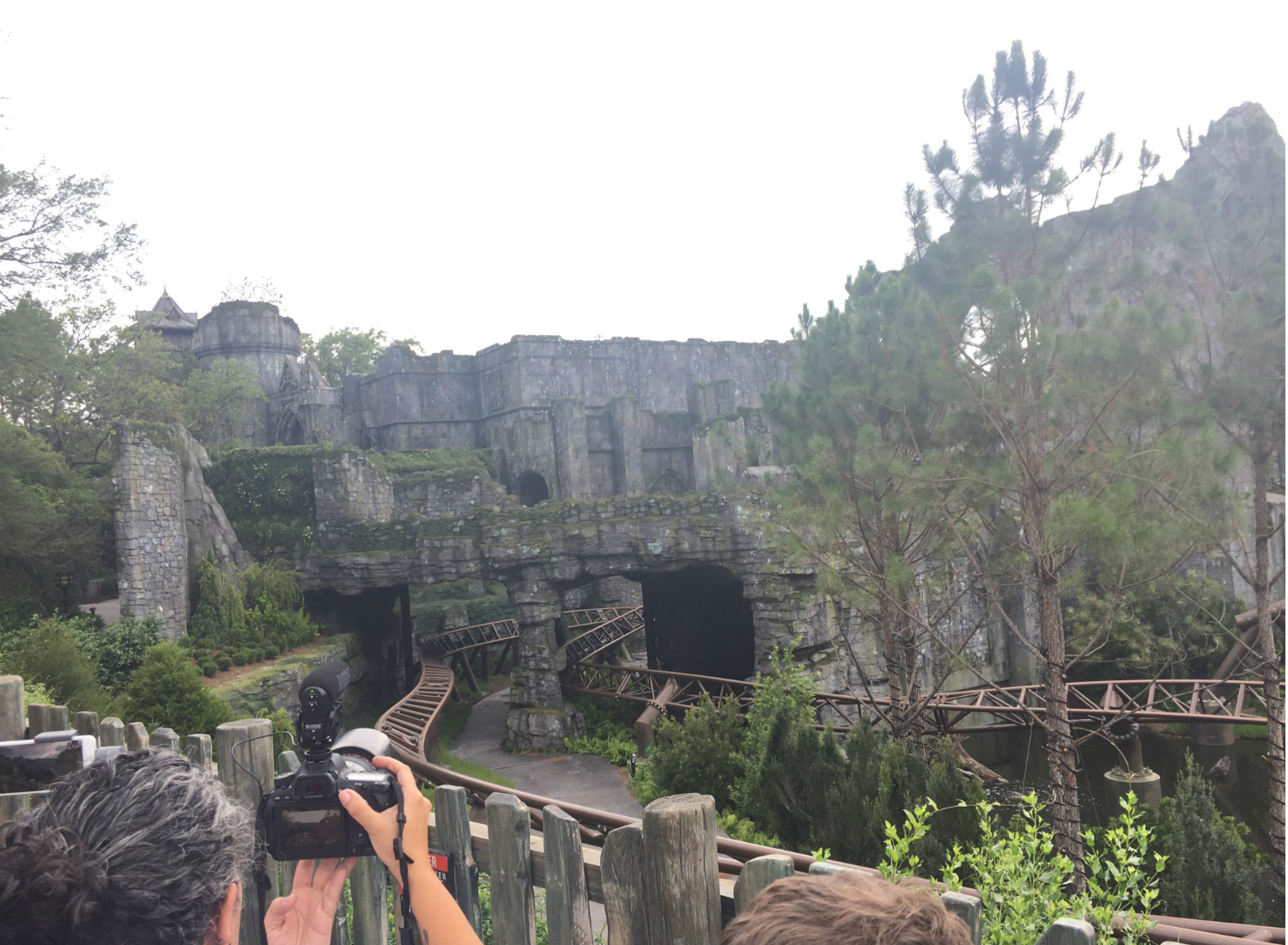 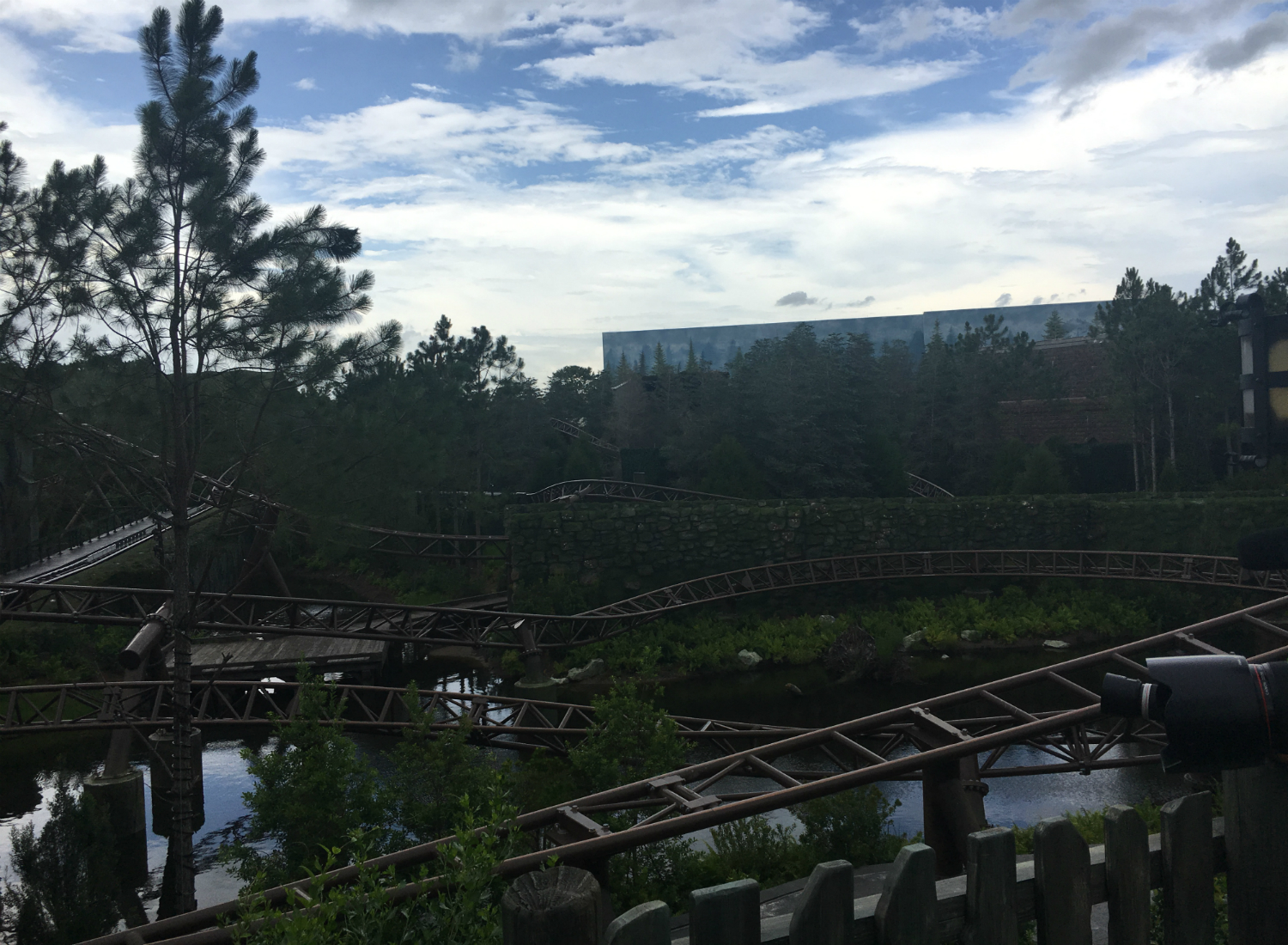 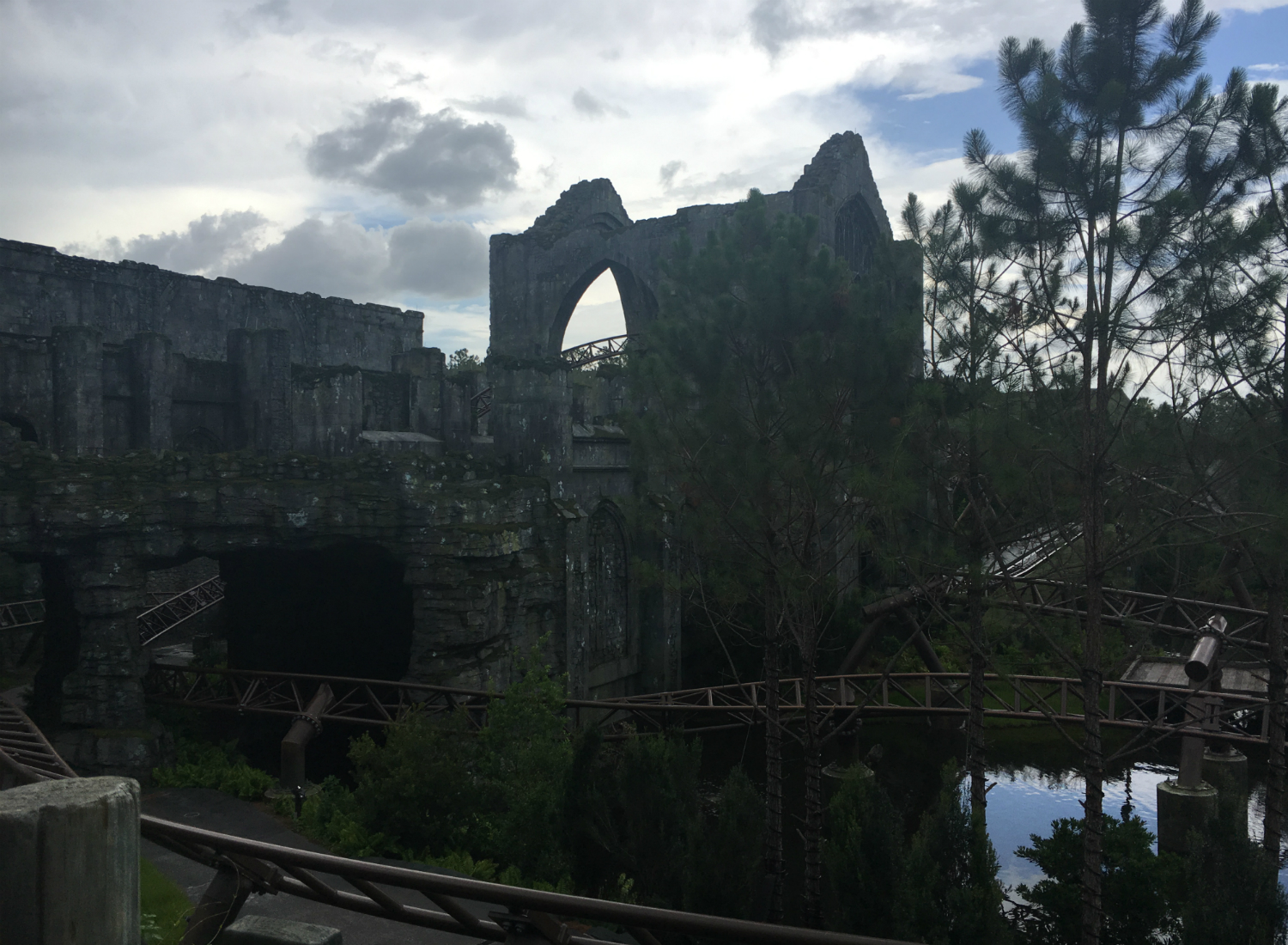 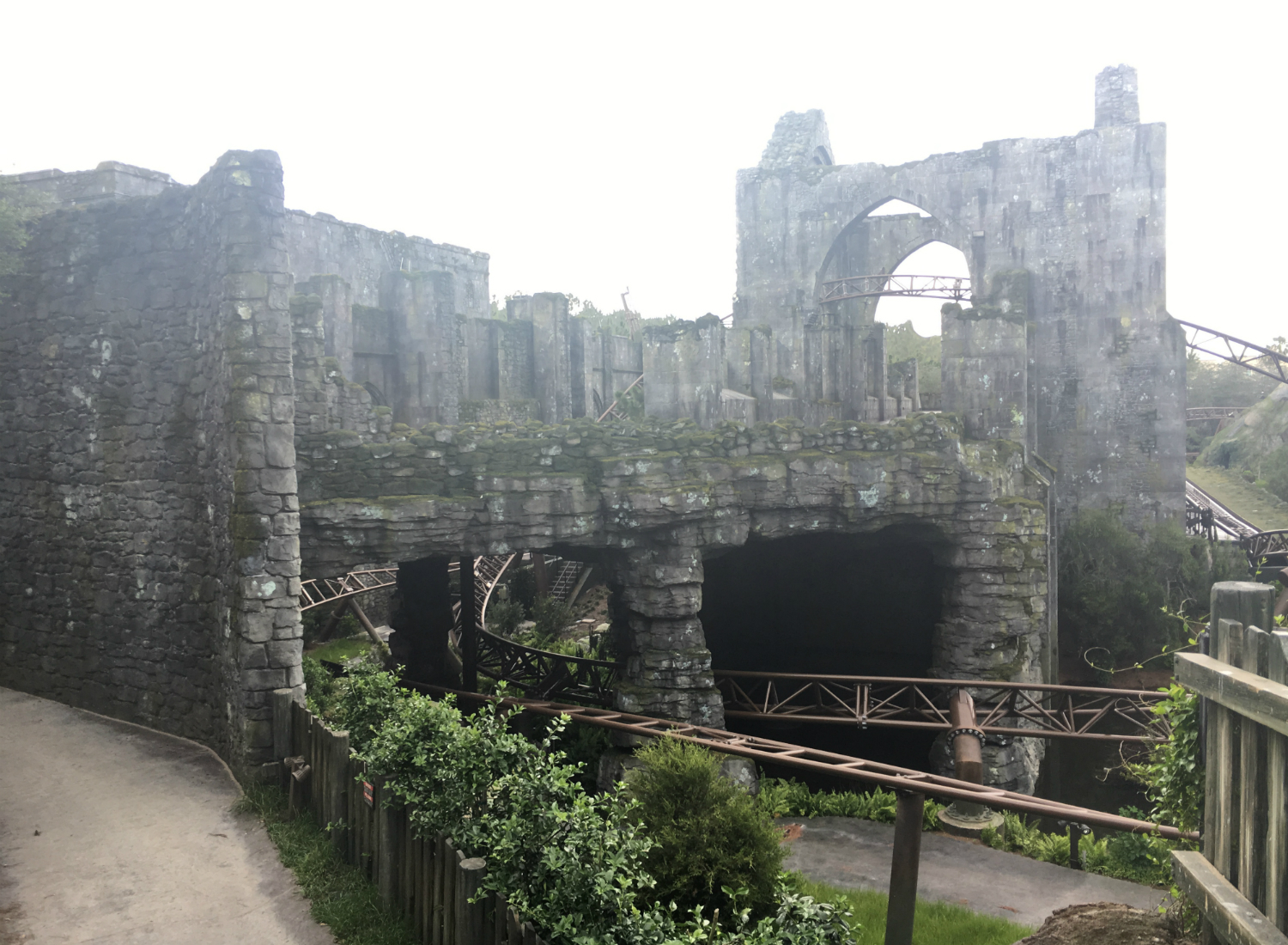 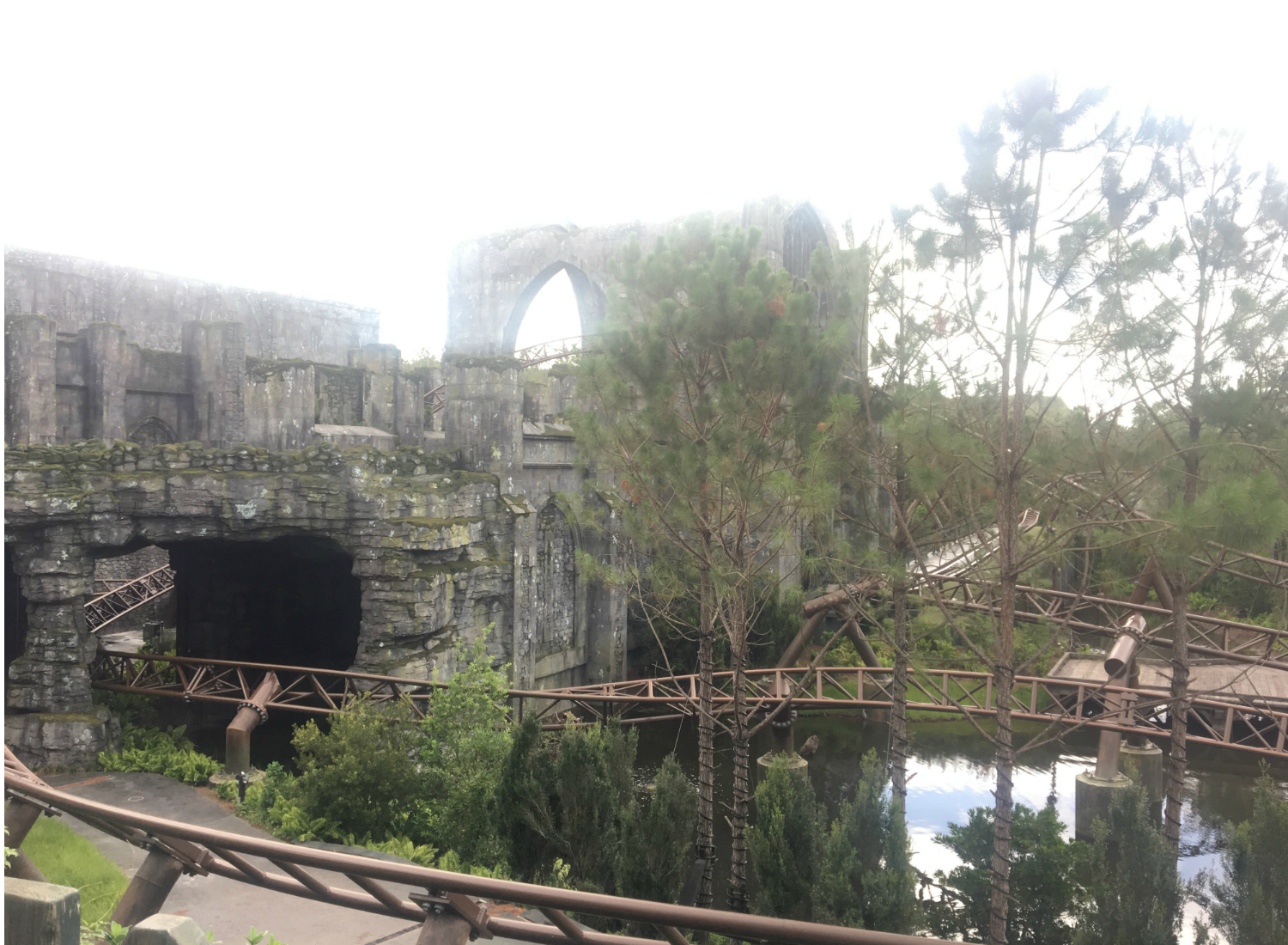 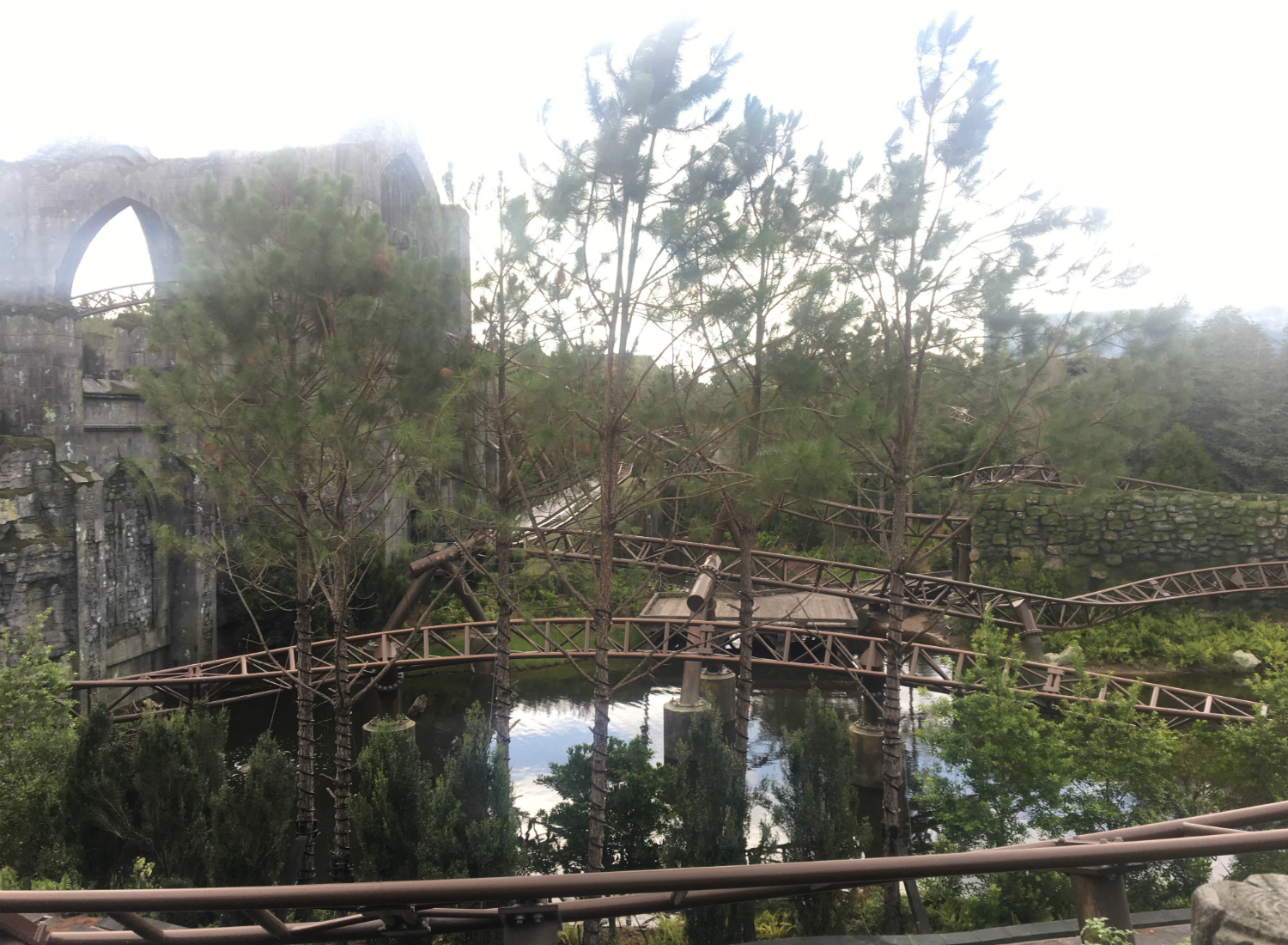 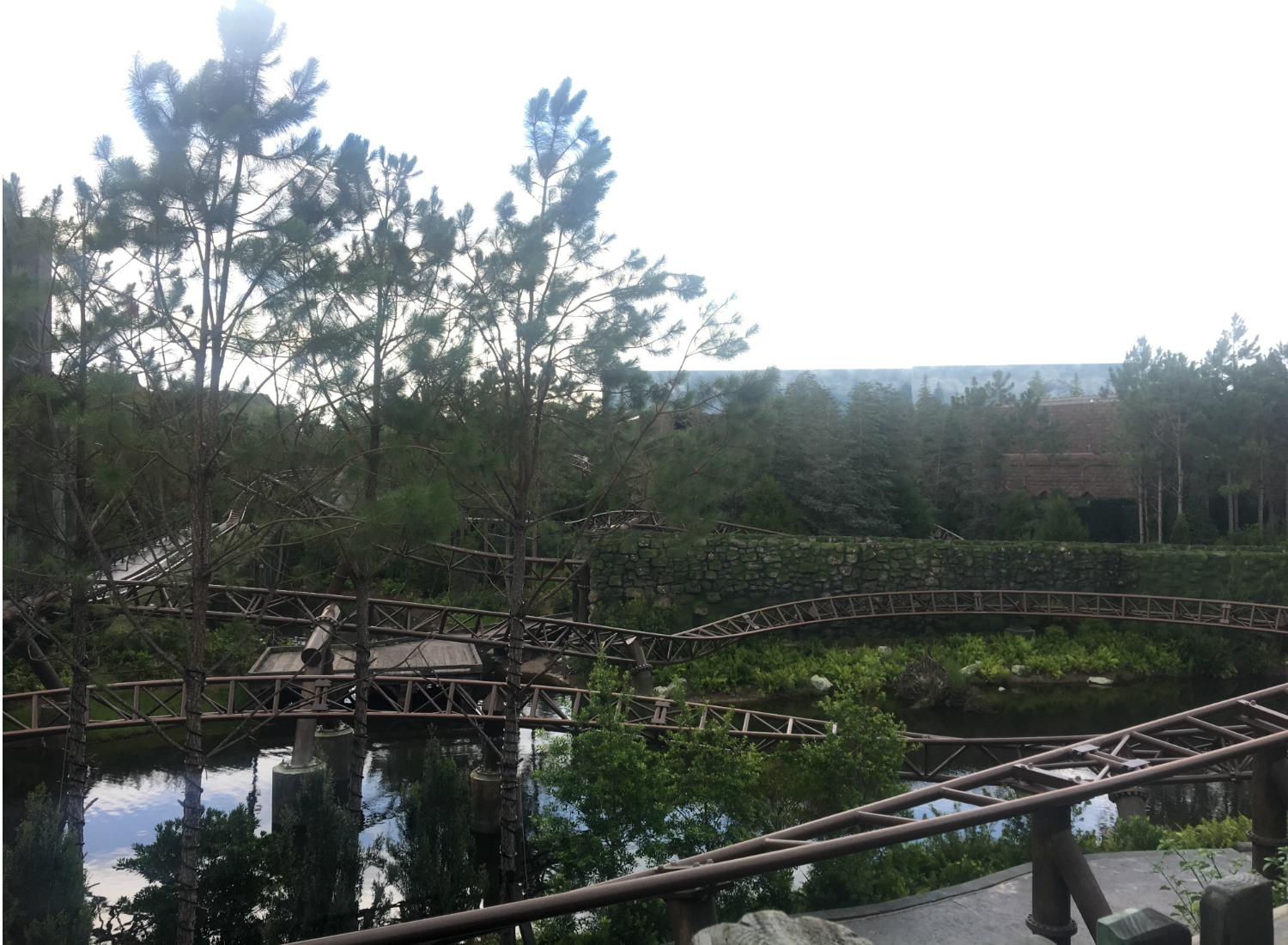 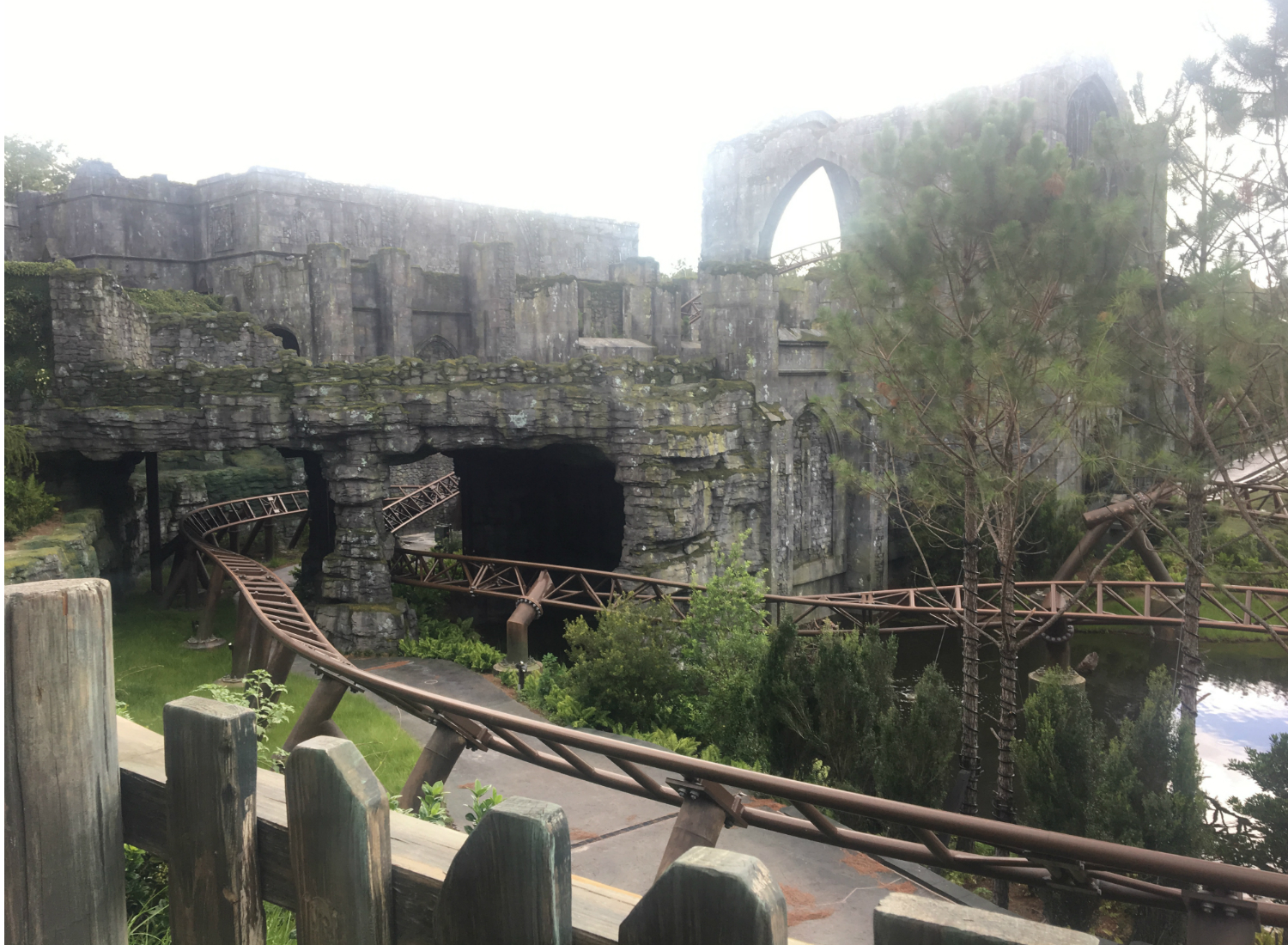 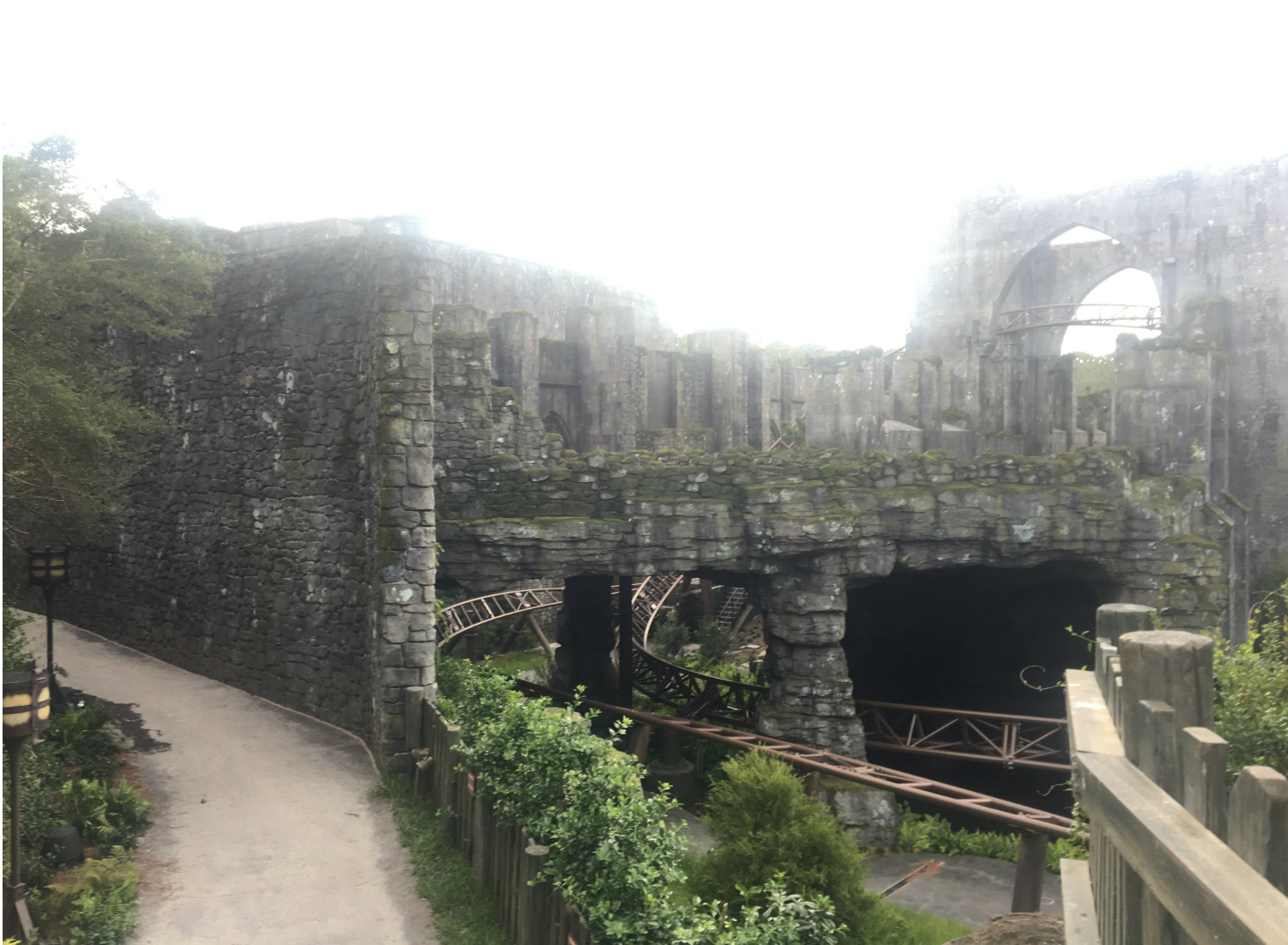