Chances are, the wait to experience the newest attraction at the Wizarding World of Harry Potter at Universal Orlando Resort will be very long for quite some time. Fortunately, like many other rides at Universal’s theme parks, Hagrid’s Magical Creatures Motorbike Adventure features plenty of entertainment along the way. These signs throughout the queue warn students not to jump over the fence – and into the Forbidden Forest.

Set on the outskirts of the Forbidden Forest, the line winds through mysterious ruins that many students have explored over the years, leaving evidence of their presence in the form of graffiti. Mottos, song lyrics, doodles, and detailed drawings decorate the walls. Hagrid has made his presence known as well through a collection of creature-related paraphernalia, from relevant books and equipment to dragon eggs. Word has it that Hagrid has been using these ruins as a hideout for his beloved beasts and has now decided to take his Care of Magical Creatures class for a look at some rich zoological diversity. Dragon eggs line the wall of a large room in the queue. We wonder how many of these are just about to hatch!

Upon entering the vicinity, you’ll be able to see the coaster track winding through the extensive ruins, reminiscent of the remnants of real medieval Scottish castles and abbeys. There wasn’t music playing during our preview experience, but there was constant whinnying in the distance. You’ll pass by Hagrid’s hut, surrounded by pumpkins, before you reach the main ivy-covered complex. Within, you can see carvings of a few creatures before reaching the indoor portion of the queue, where the students’ graffiti is worth a close look. You’ll soon be greeted by a pre-show in the form of a video projection, similar to the one that welcomes you to Harry Potter and the Escape from Gringotts in Diagon Alley, establishing the premise of the ride with appearances by some familiar characters and creatures. The twists and turns of the tunnels ahead are interspersed with Hagrid’s illustrations, research, and equipment, giving you a hint as to what the ride will be about.

A video screen explains how the boarding process will work, depending on if you want to ride the motorbike or the sidecar, and there are test seats if you’d like to get a feel for each before having to make your decision. The final room before boarding has some creepy overhead effects as shadows scuttle and motorbikes roar across the slatted ceiling. We suggest taking your time and relishing the painstaking detail in the queue, though this is almost certainly a necessity with the expected wait times. The line might take a few hours to get through for the foreseeable future, but there will be an abundance of interesting sights to occupy you, a new surprise at every turn, and mounting anticipation.

If you want to know specifics, check out the images and descriptions below for some of the Easter eggs hidden in this fascinating queue.

When you're finally able to step inside, you reach an area that students have been hanging out in (and defacing) for decades, at least. We're sure we weren't able to spot everything in the limited amount of time we had in the room, but here's a start! 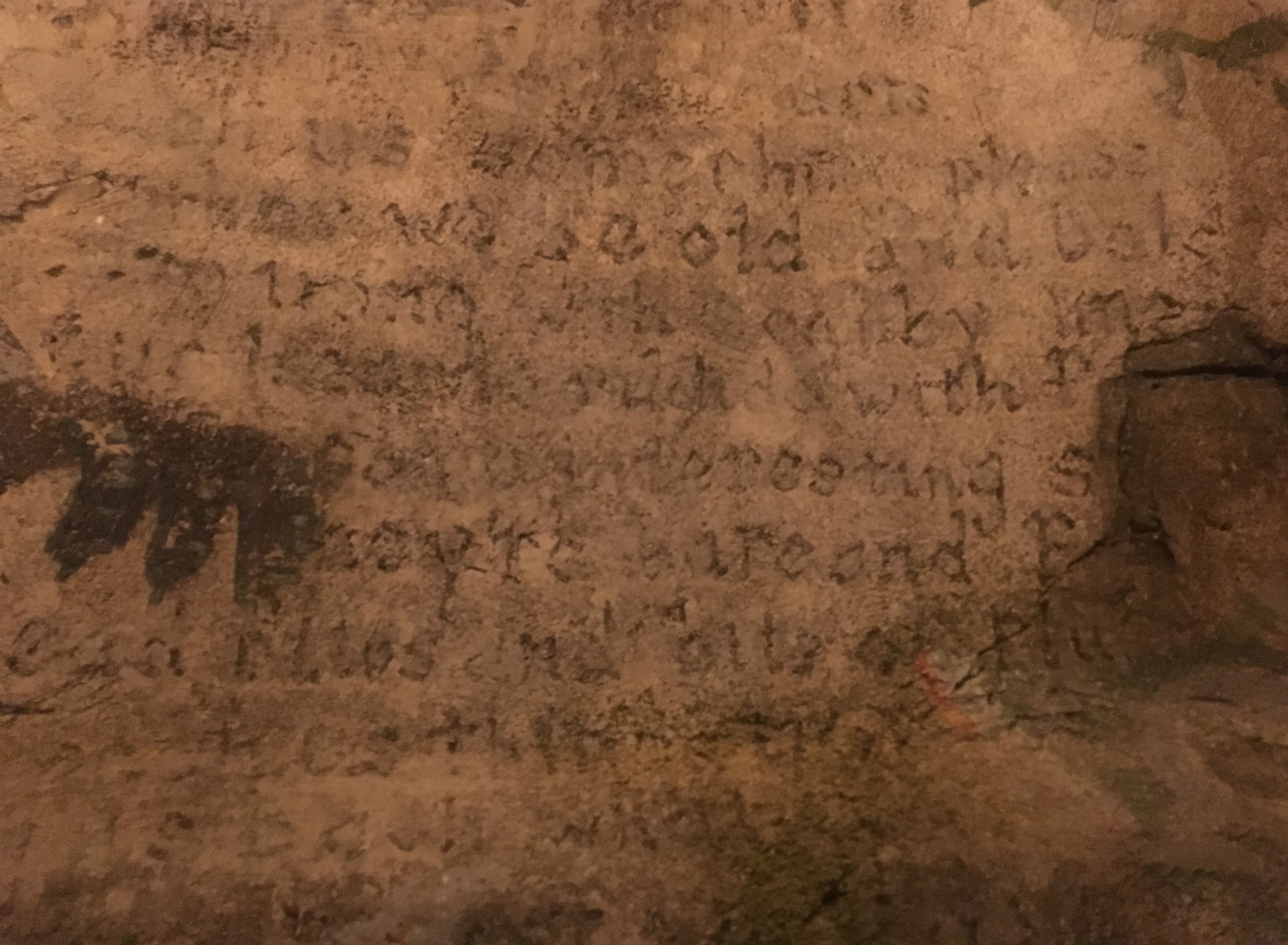 The Hogwarts school song is written in full on a wall inside the complex of ruins. 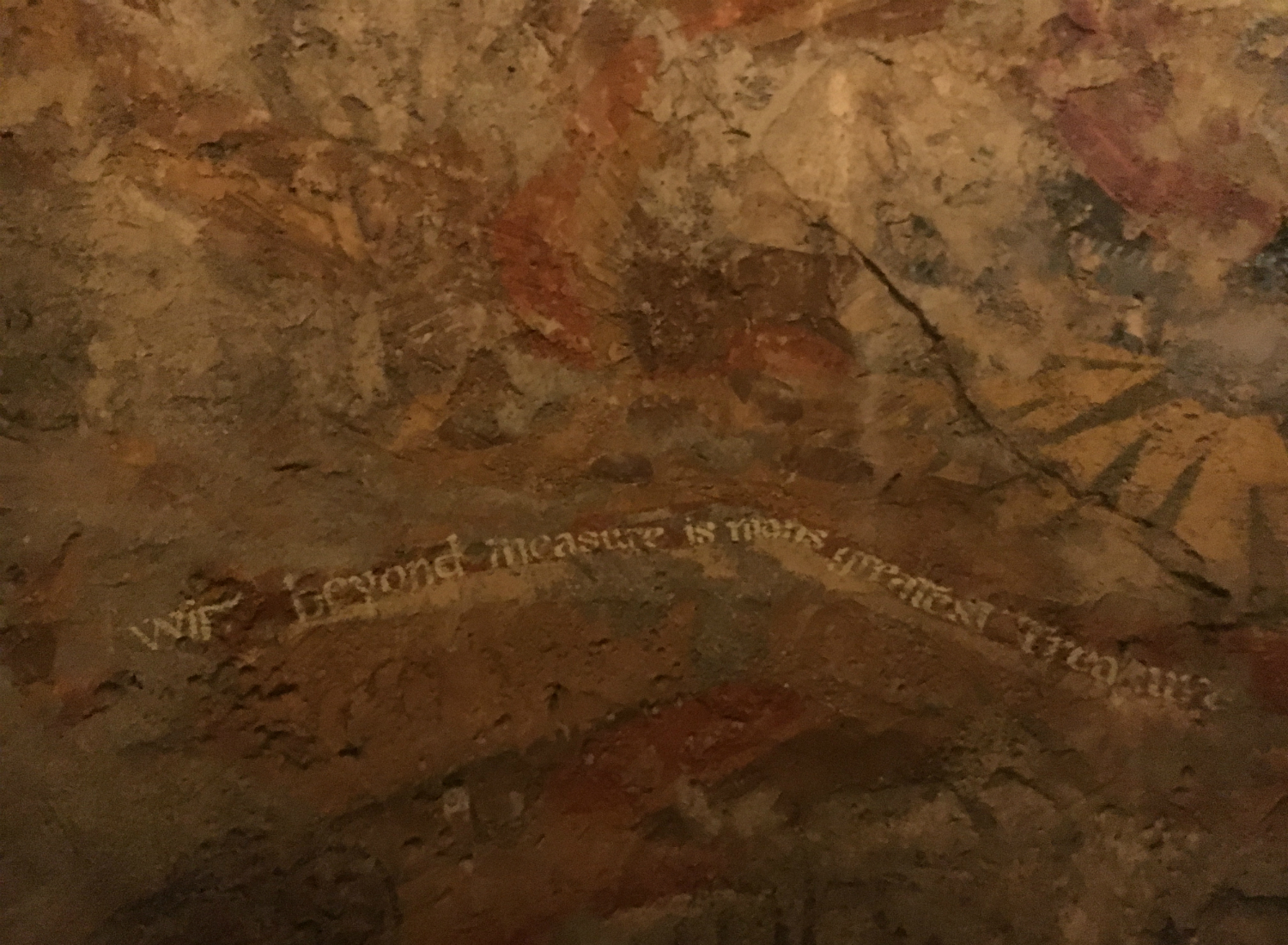 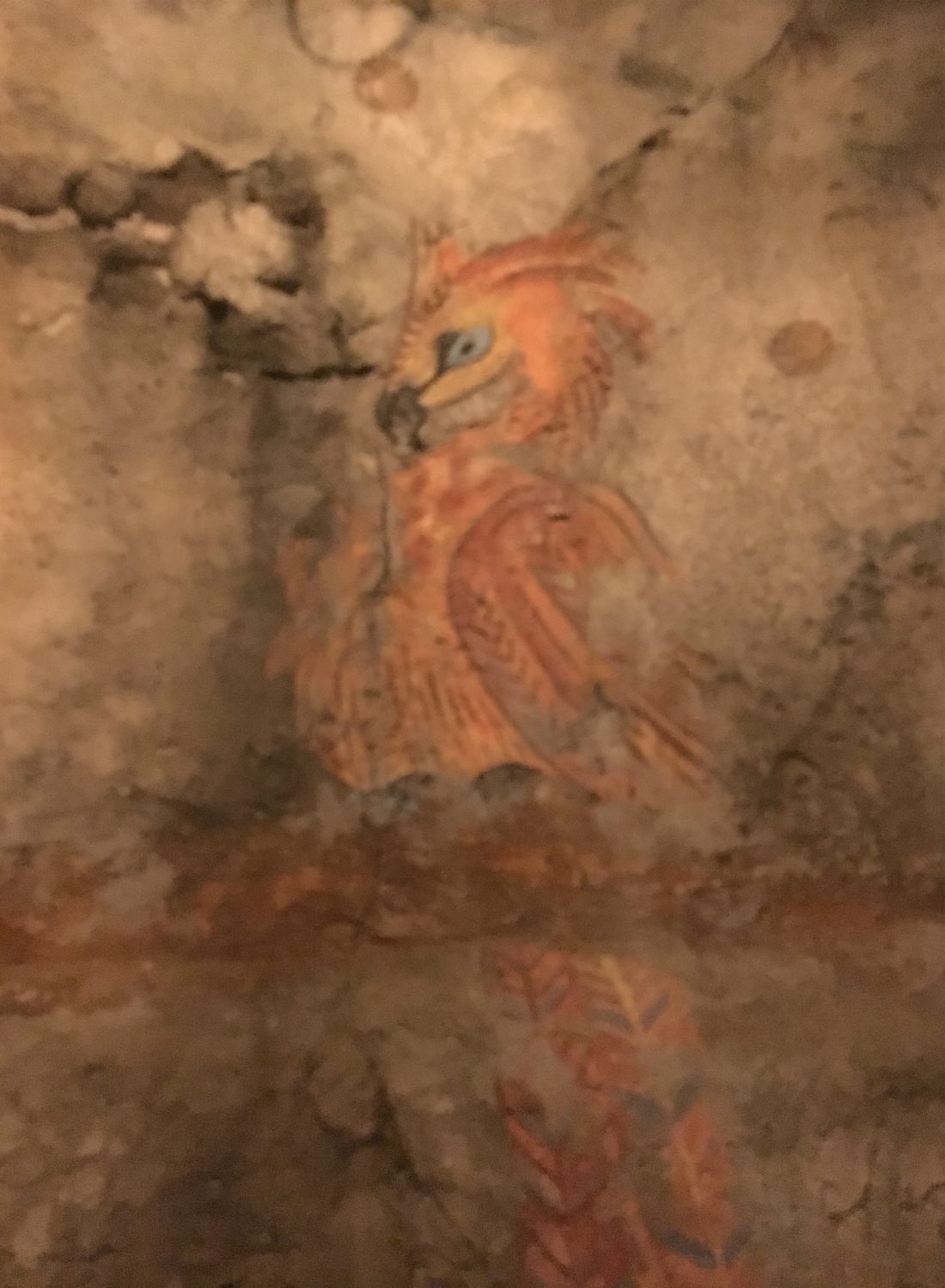 A particularly artistic student must have painted this baby phoenix born again from the ashes. 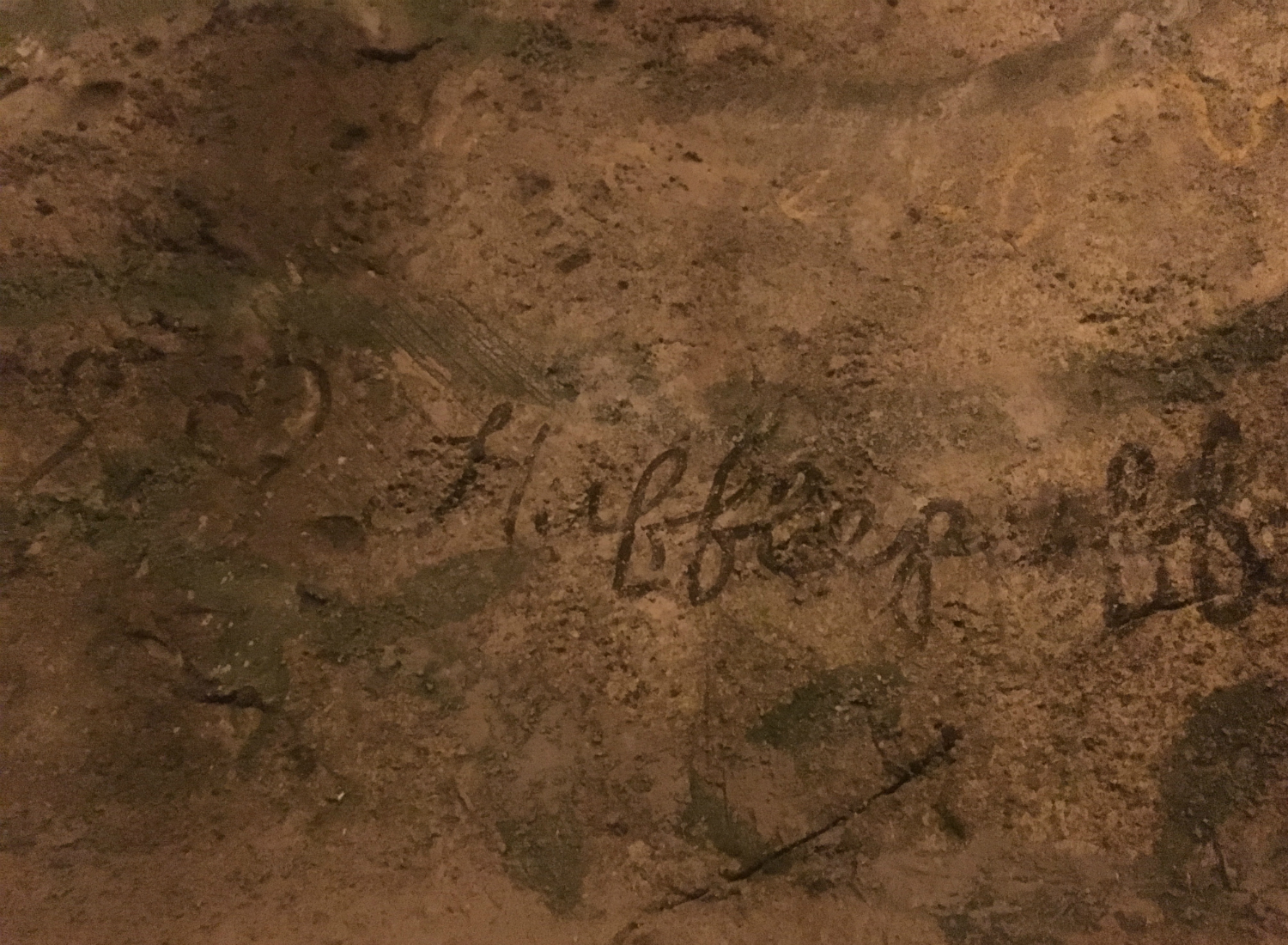 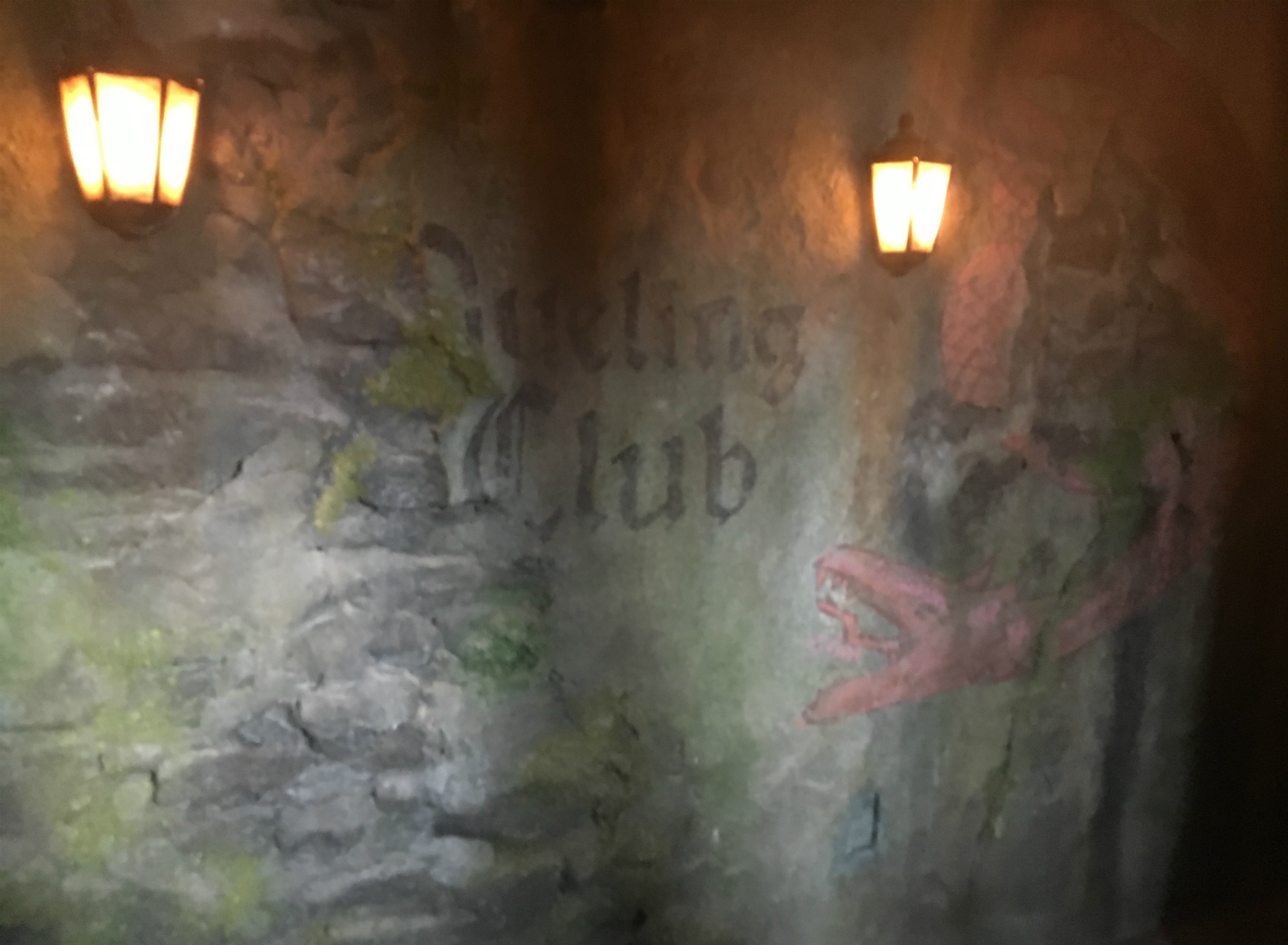 On either side of this “Dueling Club” notice is a dragon. The original ride in this location, which was rethemed to Dragon Challenge with the opening of Hogsmeade in 2010, was named Dueling Dragons.

After a thorough examination of all the interesting tidbits written and painted along the walls at the entrance to the ruins, you pass into a larger room containing the dragon eggs. A pair of doors opens up, leading you into the pre-show room. This introduction to the ride features Arthur fixing up Hagrid's motorbike and modifying it to run on dragon fire. Familiar creatures and items like Fang, Cornish pixies, salamanders, Hagrid's pink umbrella, the Water-Making Spell (Aguamenti) to deal with dragon fire going off, and the Doubling Charm (Geminio) to duplicate the bike so that there are enough for everyone to ride.

The next room is Hagrid's workshop, where he hangs illustrations of magical creatures, including Cornish pixies, a Fire Crab, a manticore, Nifflers, salamanders, and unicorns, on the walls. In front of you lies a big table with a lantern, a huge pair of gloves, an hourglass, a book that may explain how to breed a Fire Crab and a manticore, and various other tools and instruments Hagrid would need to breed and care for Blast-Ended Skrewts. 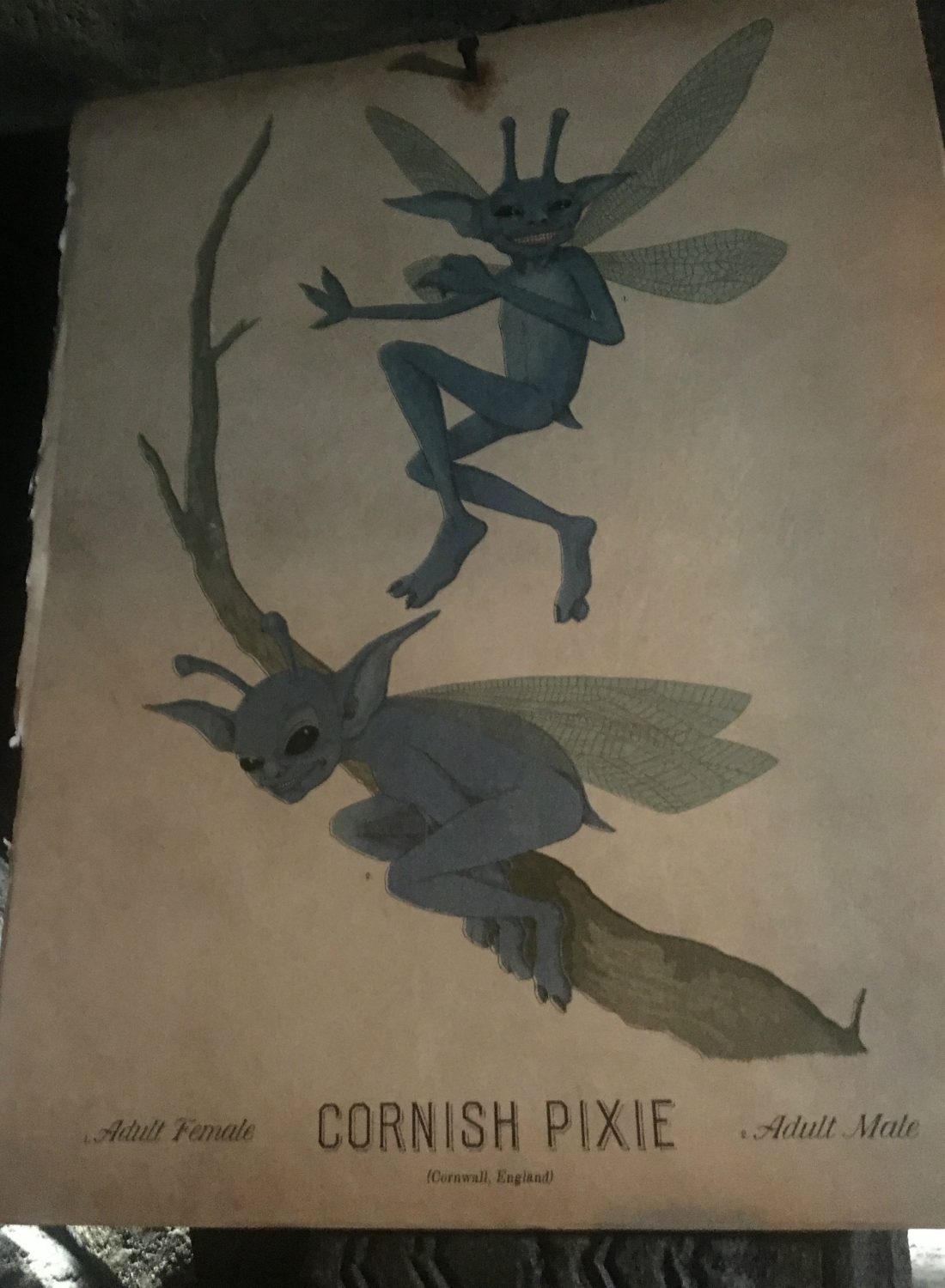 This illustration features an adult male and female Cornish pixie. 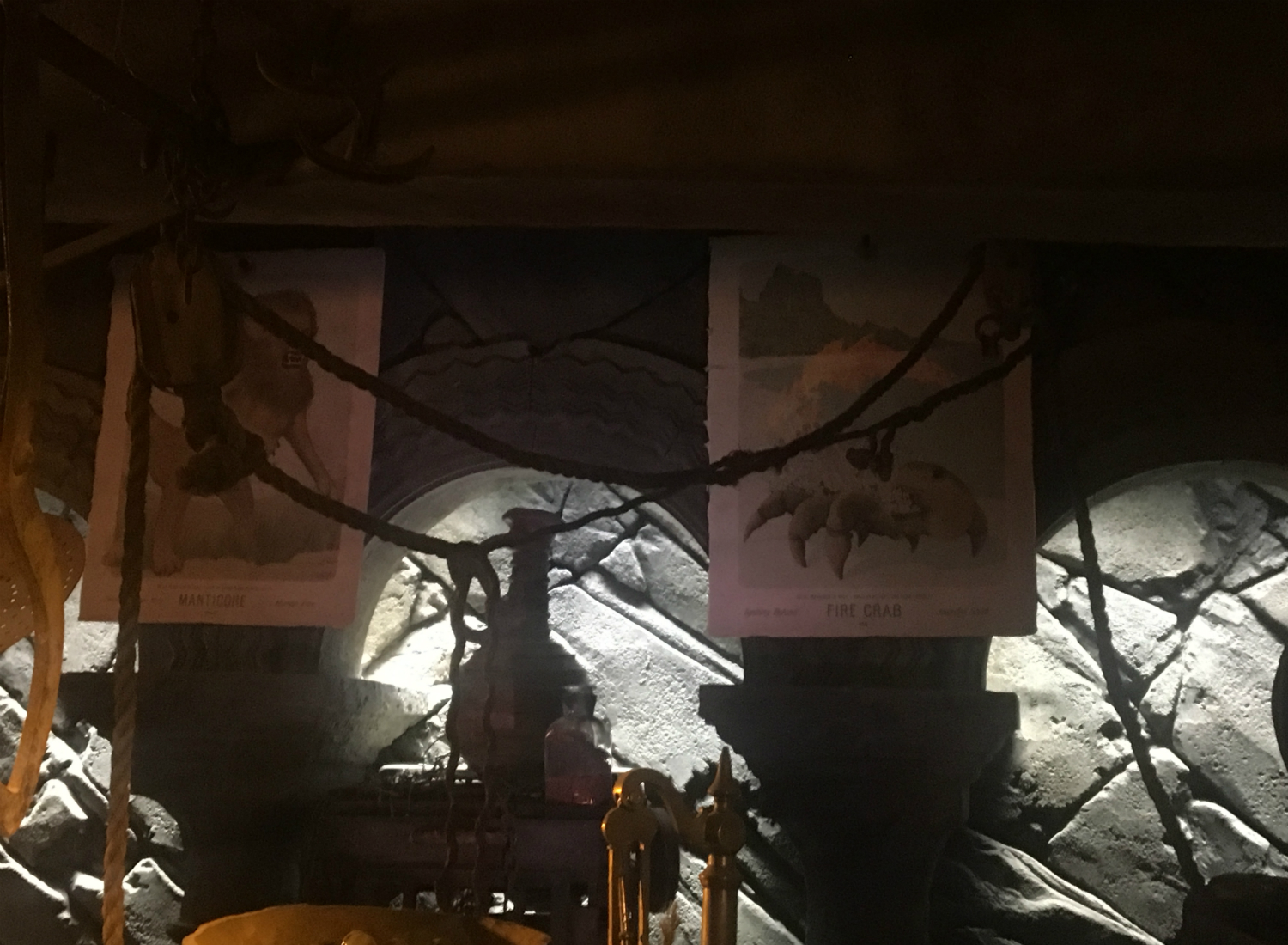 The Fire Crab and manticore illustrations are hung directly behind Hagrid’s work table, where they are easily accessible for research purposes. 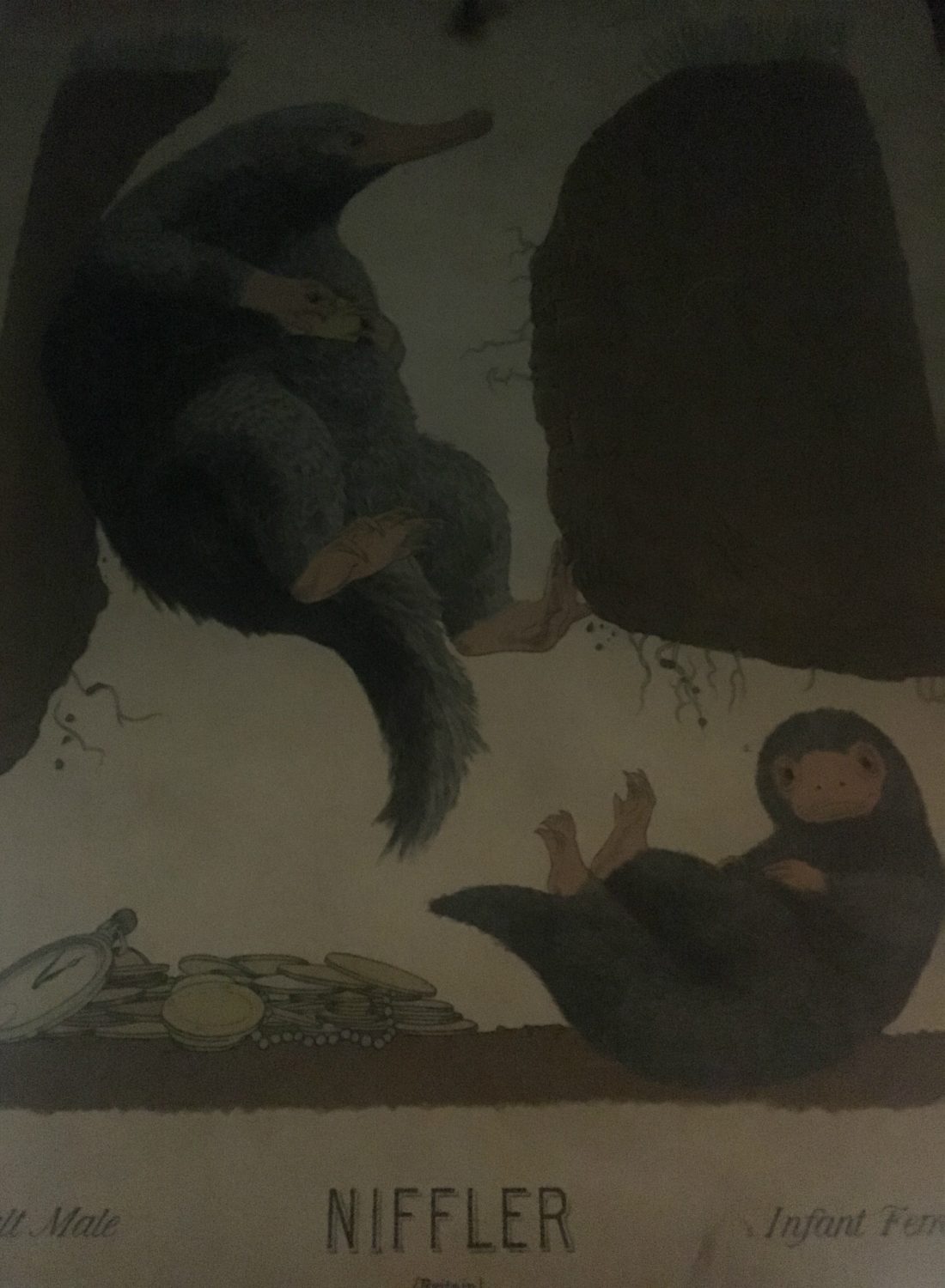 This illustration features an adult male and infant female Niffler. 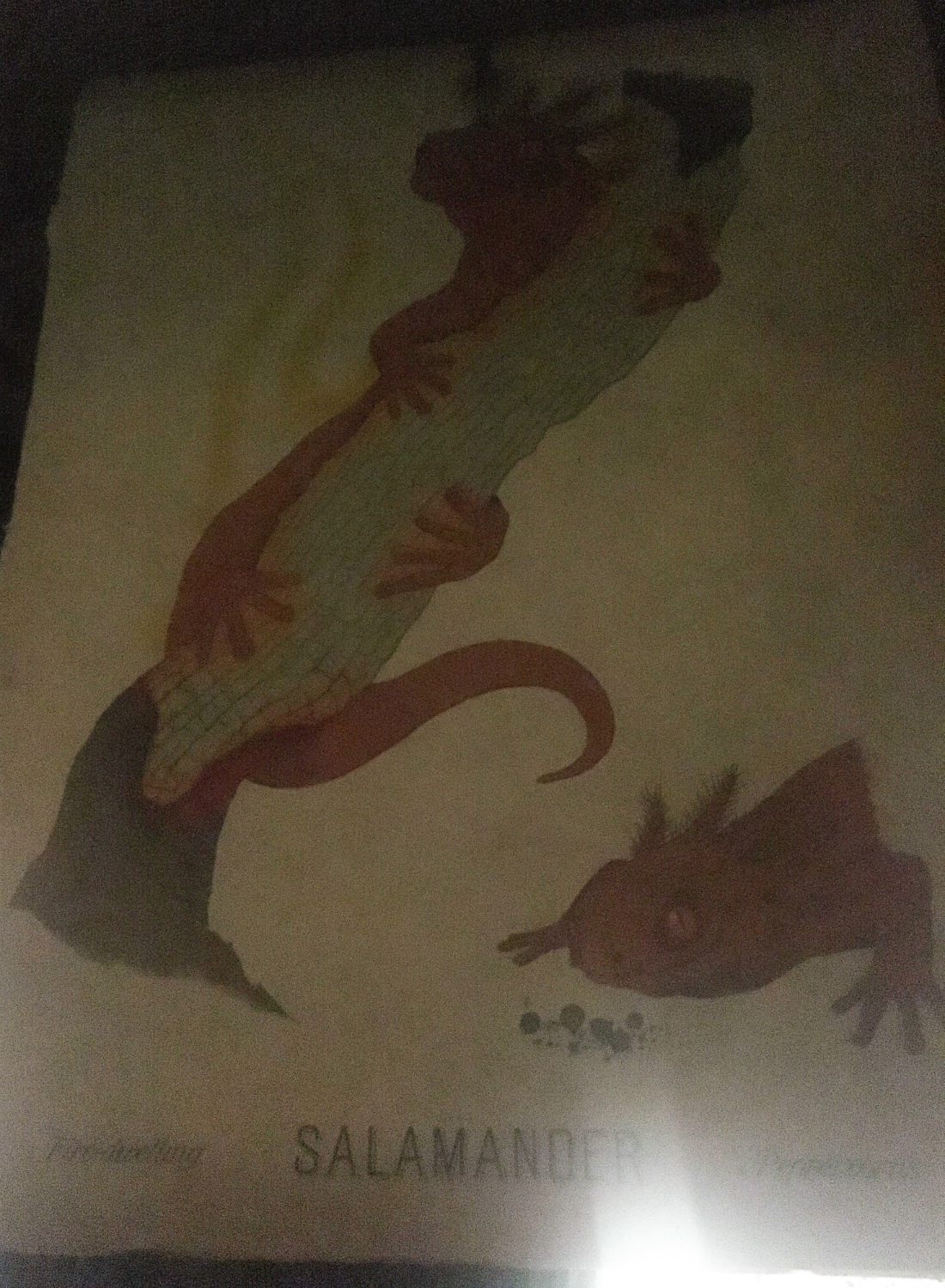 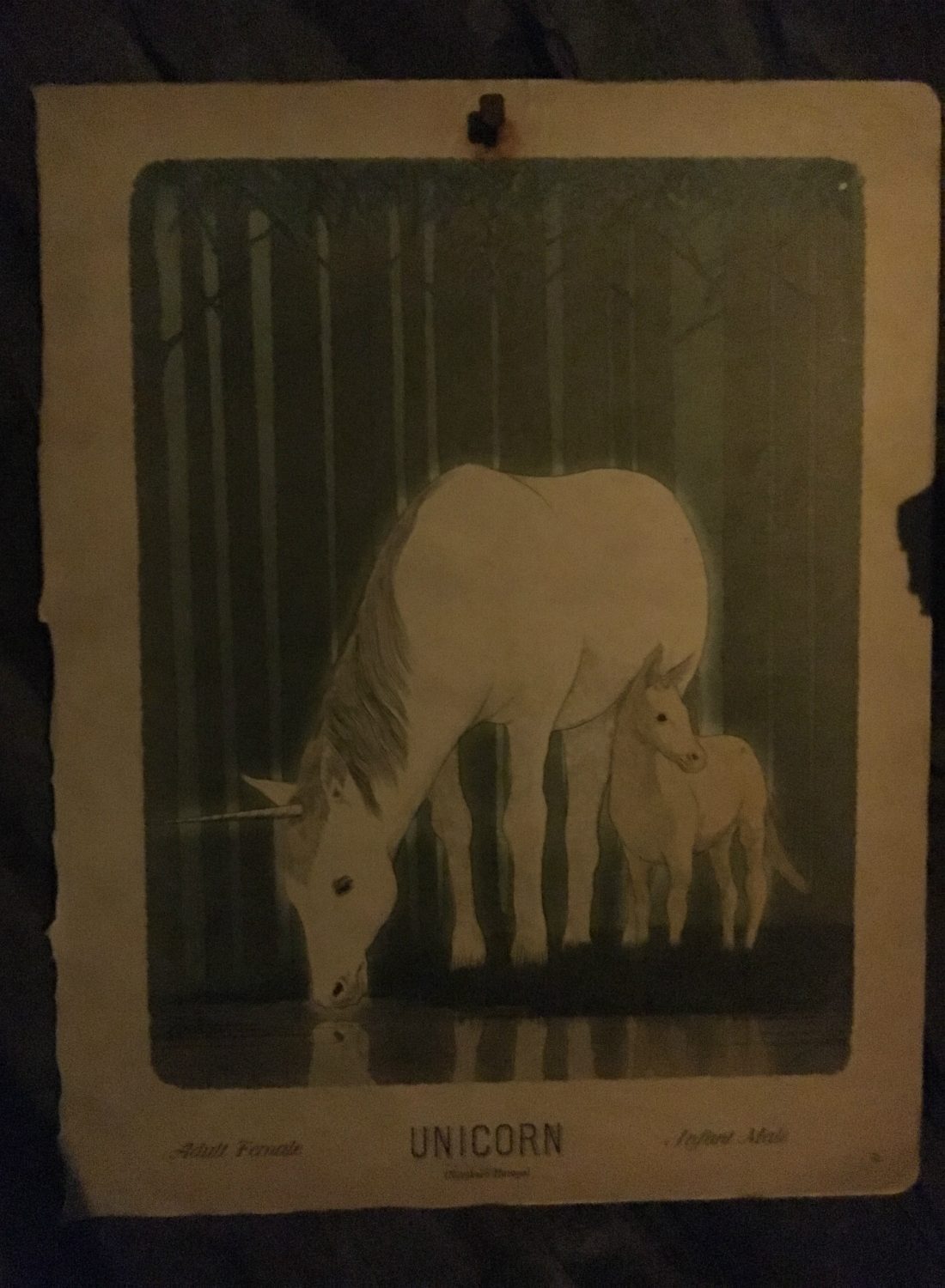 This illustration features an adult female and infant male unicorn. 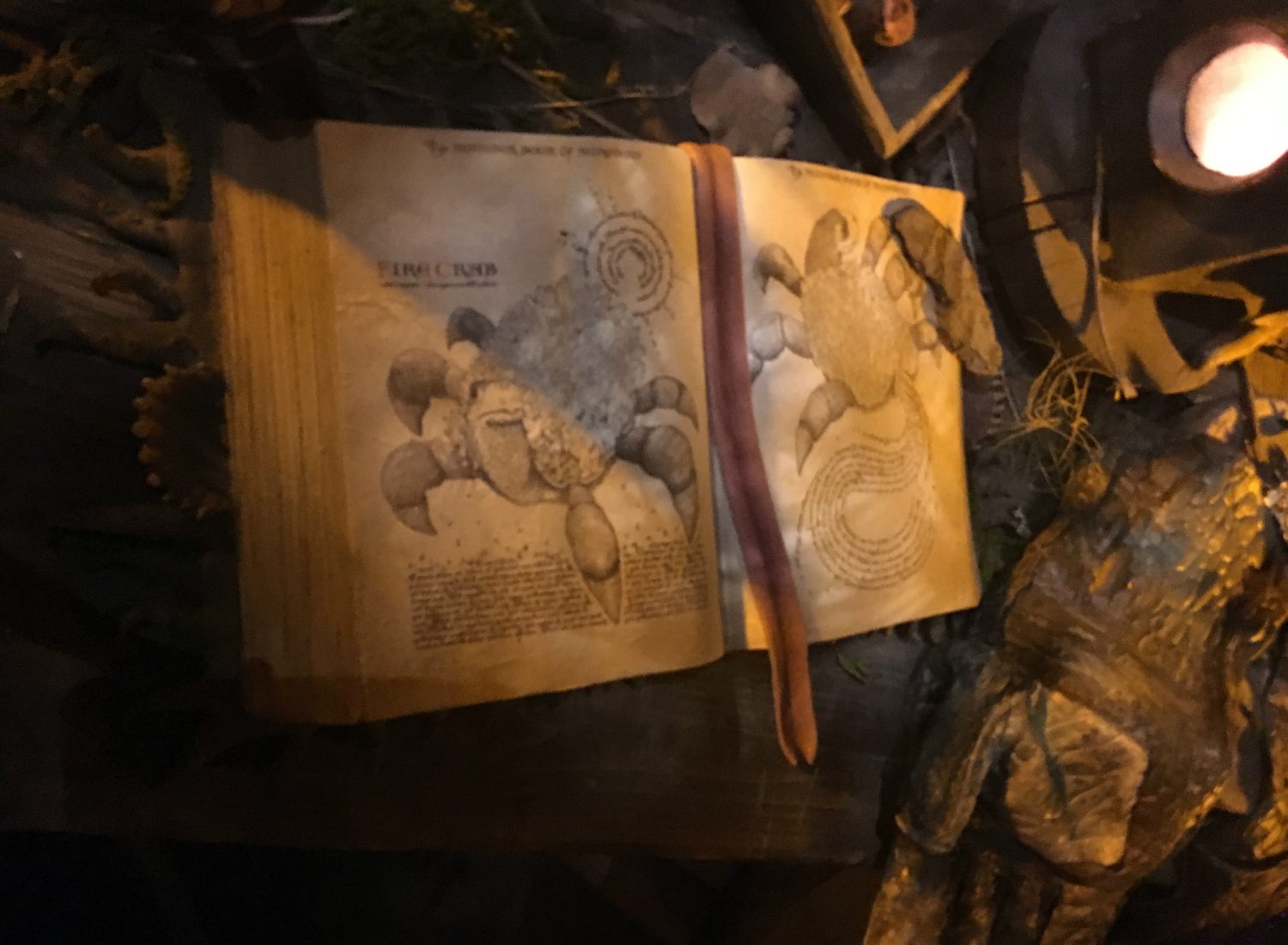 This book has information about Fire Crabs and manticores. Hagrid must be using it to do some research on experimental breeding. 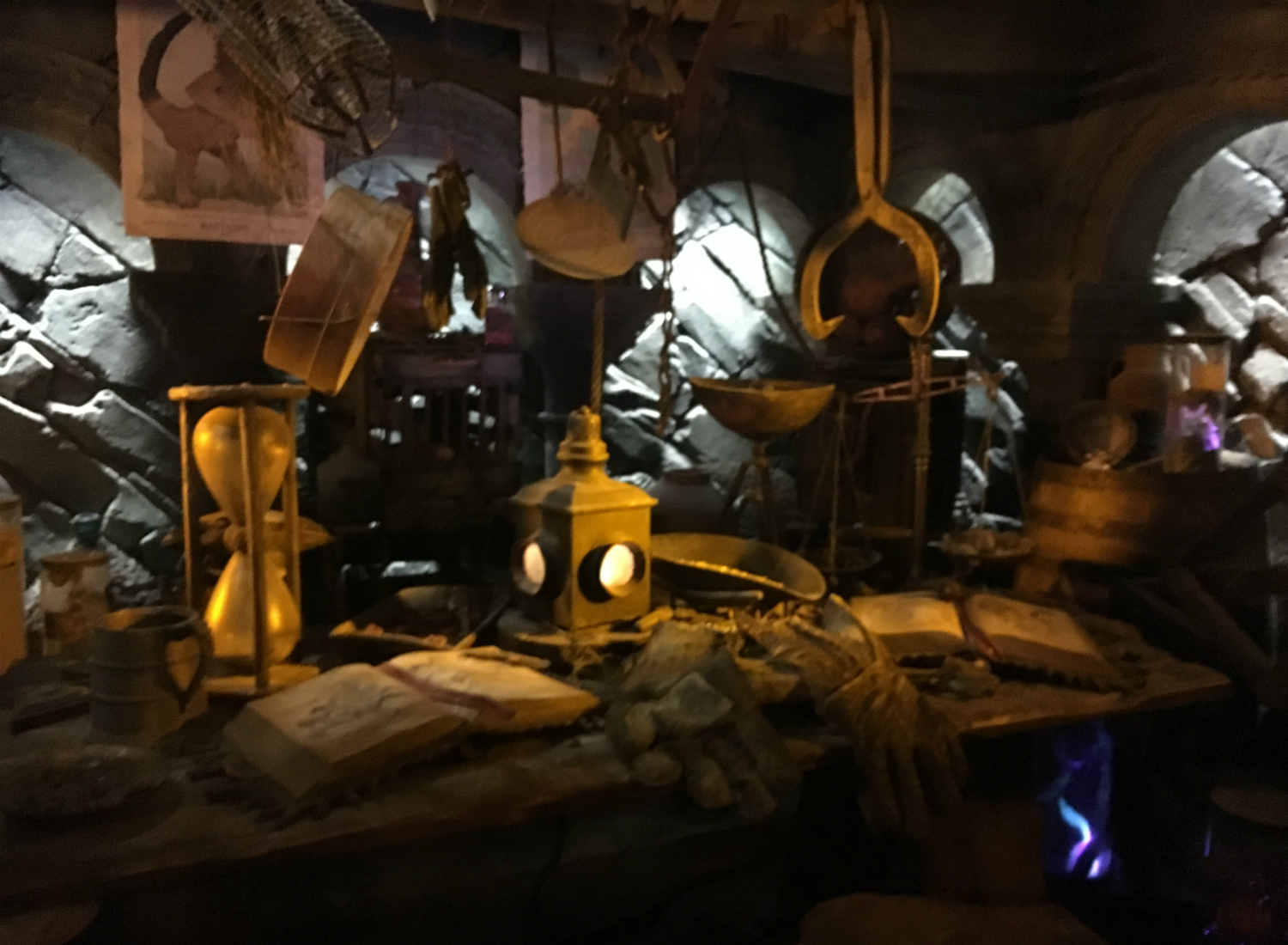 Hagrid’s work table is full of items that are perfect for traveling into the Forbidden Forest and handling magical creatures – even at night.

The last room before rounding the final corner of the queue and reaching the highly anticipated ride is pretty dark - though not as dark as the rock tunnels leading to it. Every so often, a group of Acromantulas will scurry across the roof, leaving their eerie shadows behind.