It’s officially here: The “Dark Arts at Hogwarts Castle” light and projection show is finally up and running at Universal Orlando Resort! MuggleNet was invited out to a media event to preview the entire show, and we’ve got all the details and inside information.

Upon entering Hogsmeade Village, there was eerie green lighting and fog. Everywhere we looked, we were gestured to come to the front of the Three Broomsticks/Hog’s Head. A crack of thunder and some strobe lighting later and Death Eaters poured out of every crevice of the village. They looked like they came straight out of the movie and were dressed head to toe in black cloaks. Each mask was unique, and even the Death Eaters’ footwear was perfectly aged and themed. There were female and male Death Eaters, and they loomed around every corner, trying to recruit any young or innocent-looking visitor. They paused long enough for an ominous photo but continued lurking around the crowd at all times. After all the visitors were given a good look at and “visit” with the Death Eaters, we were ushered to the front of Hogwarts Castle. The projection show is approximately ten minutes of breathtaking visual effects accompanied by pyrotechnics and hauntingly beautiful music from the movies. The show features the most mysterious of all magic, the Dark Arts. The lights dimmed, and Parseltongue was whispered across all the speakers around us. Attendees stood frozen to the spot. The show started, and each scene was more frightening and enrapturing than the next. It began with the castle transforming to the dark storefront of Borgin and Burkes and featuring the creepy stacked skulls. Hagrid would be pleased, and possibly even a little concerned, to see the Acromantulas crawling up the castle walls (this part even featured what looked to be a human body “snack” for the spiders). We were definitely not prepared for the fiery waves of Inferi to overtake the castle right before Voldemort himself took the scene and the walls of Hogwarts came “crashing” to the ground. 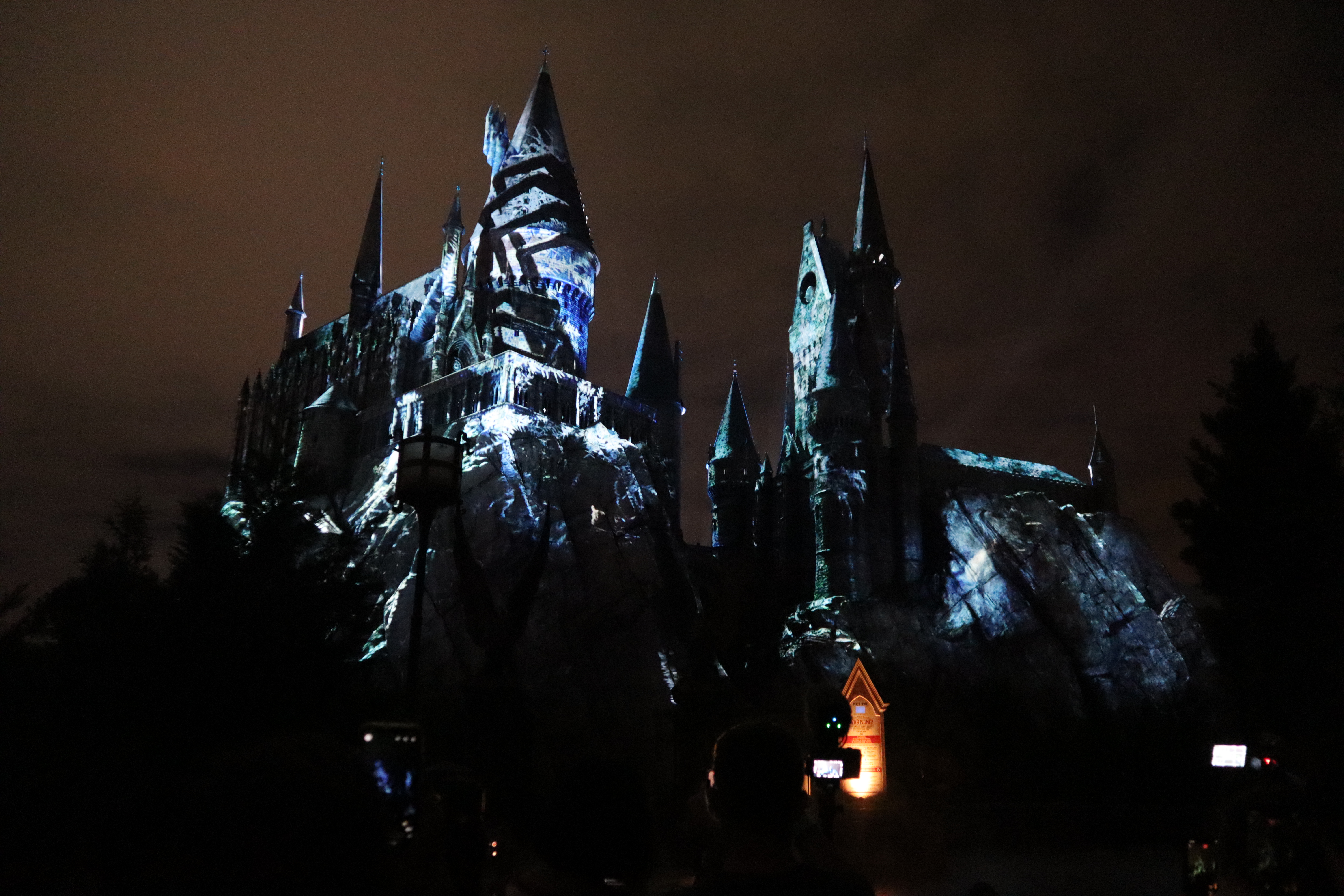 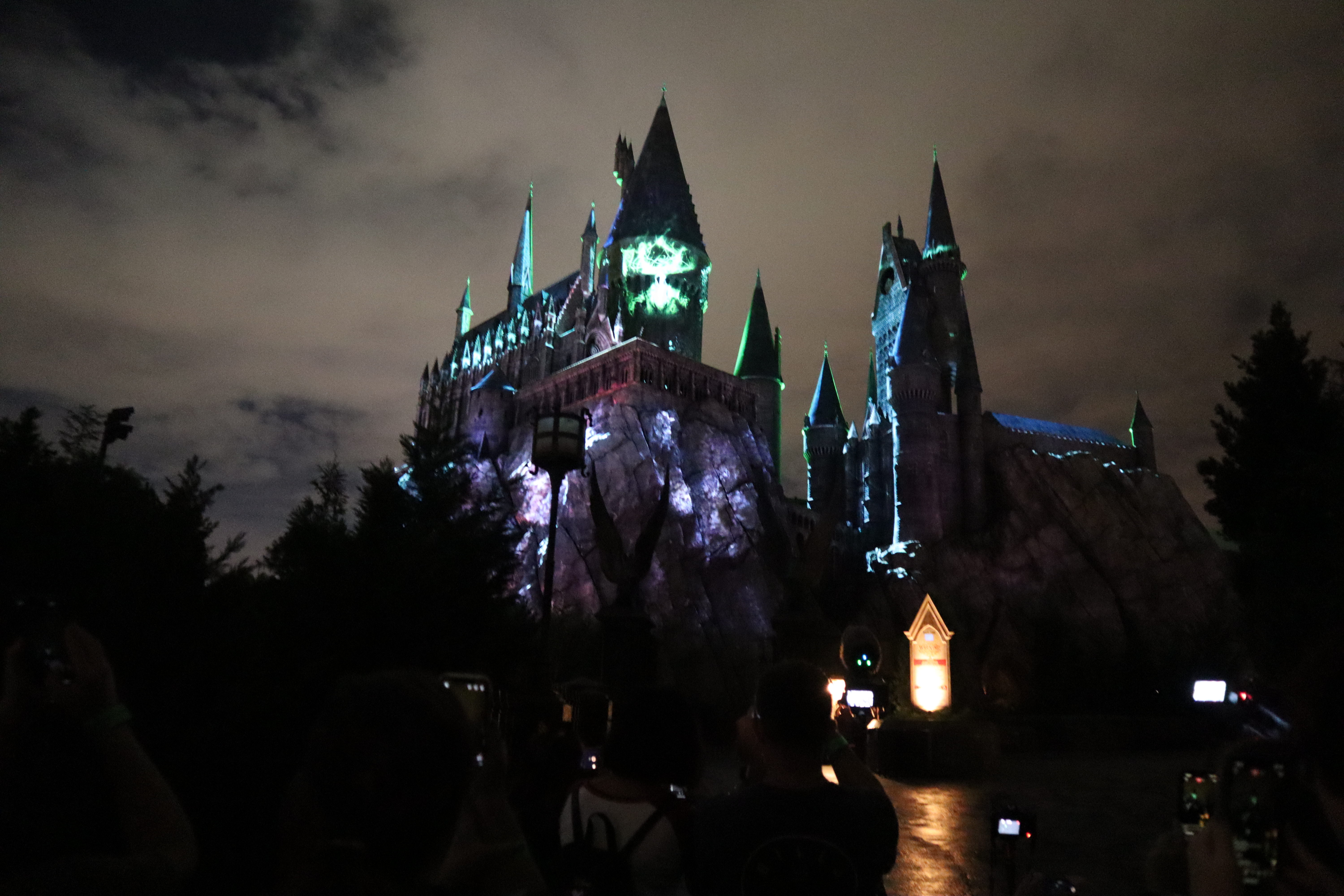 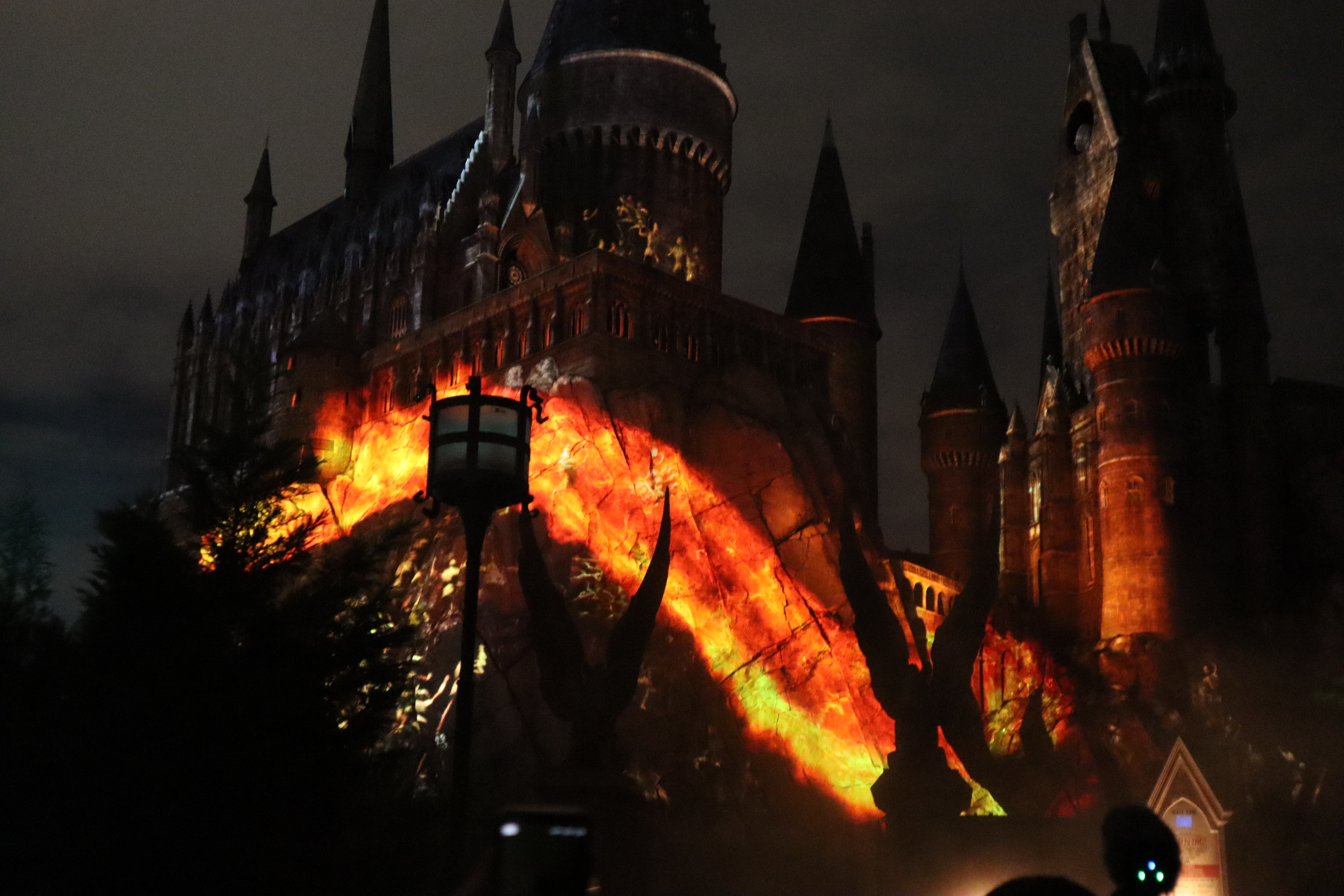 Inferi create a fiery wall up the sides of the castle in “Dark Arts at Hogwarts Castle.” 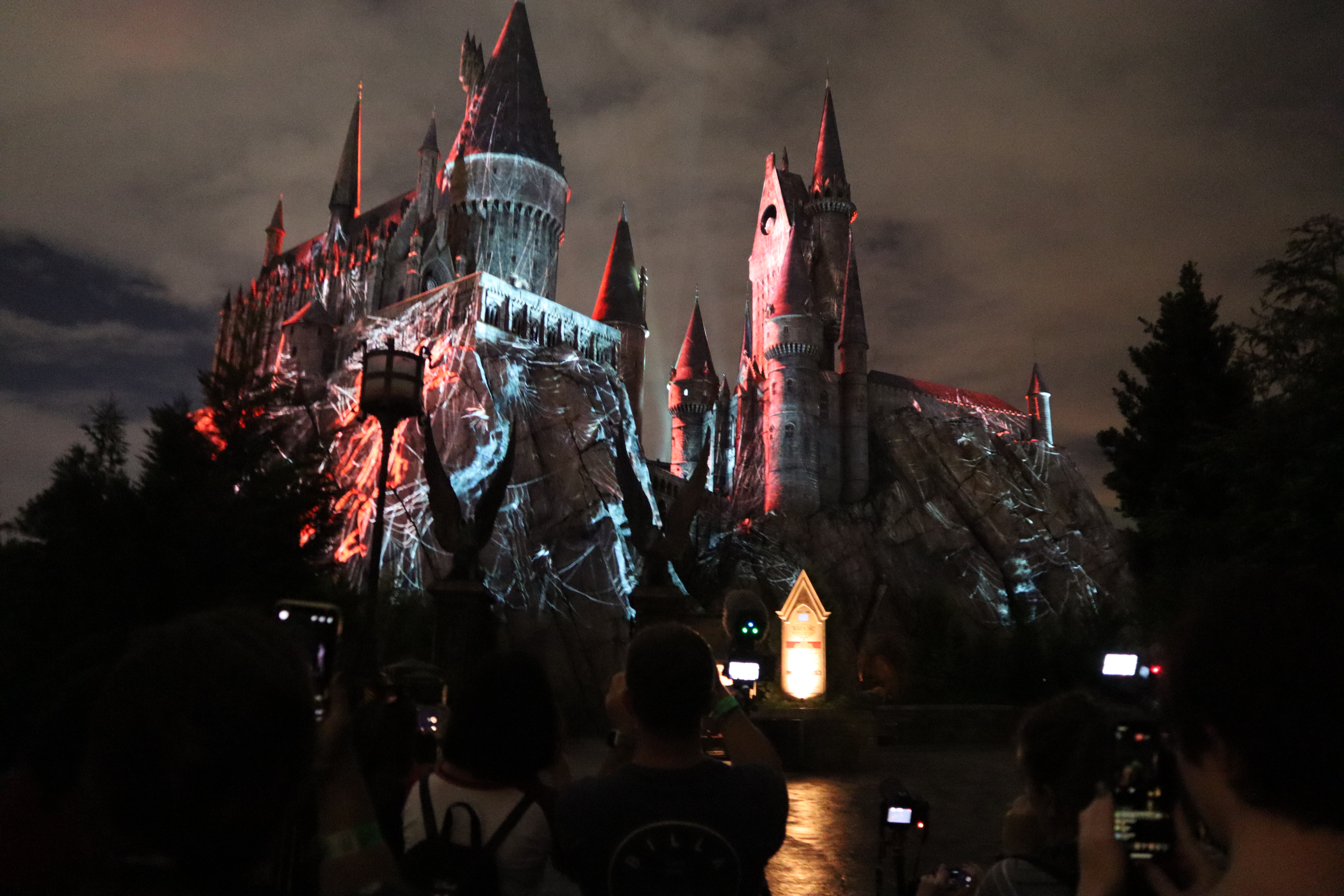 “Why spiders? Why couldn’t it be ‘follow the butterflies’?” Acromantulas cover the castle. 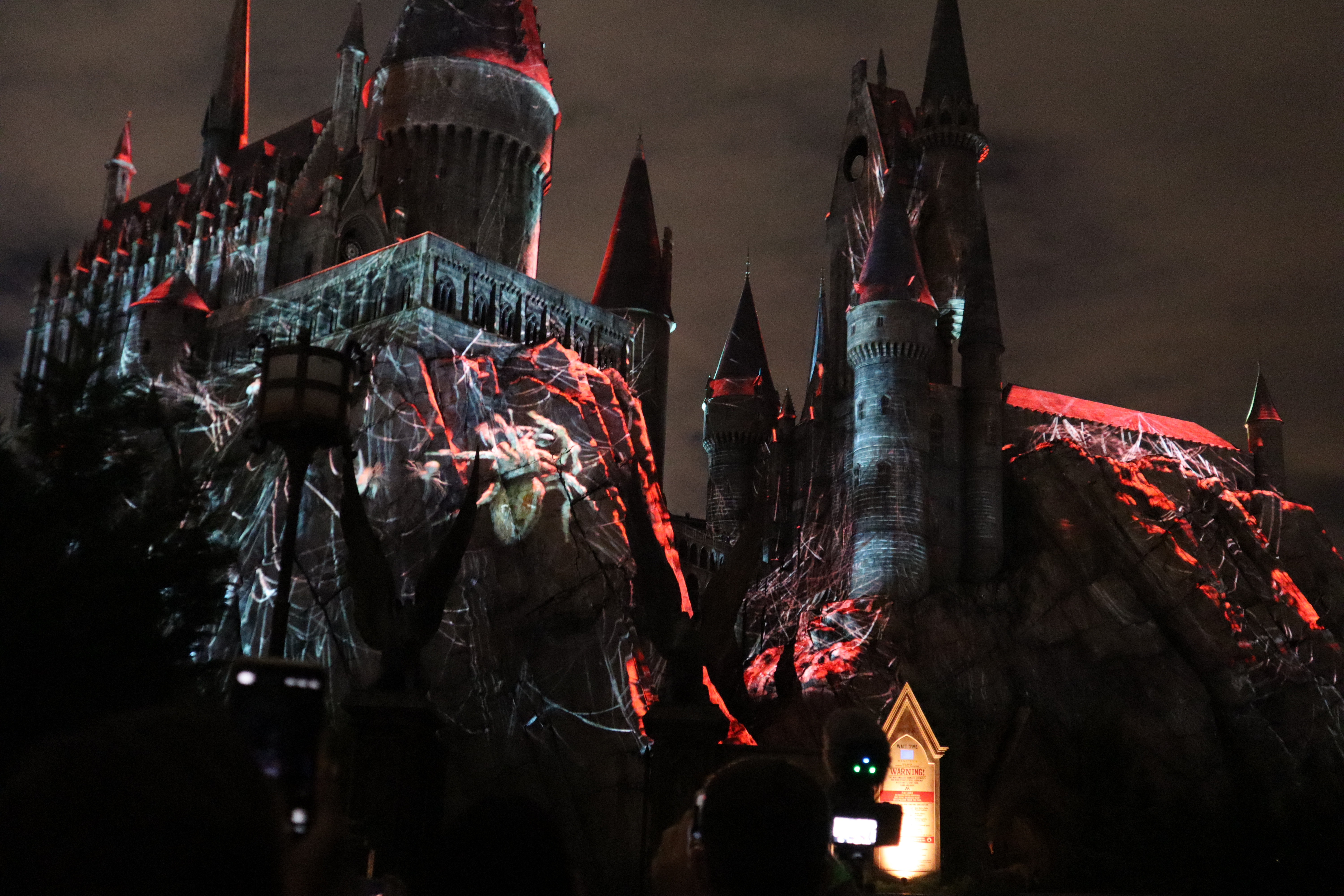 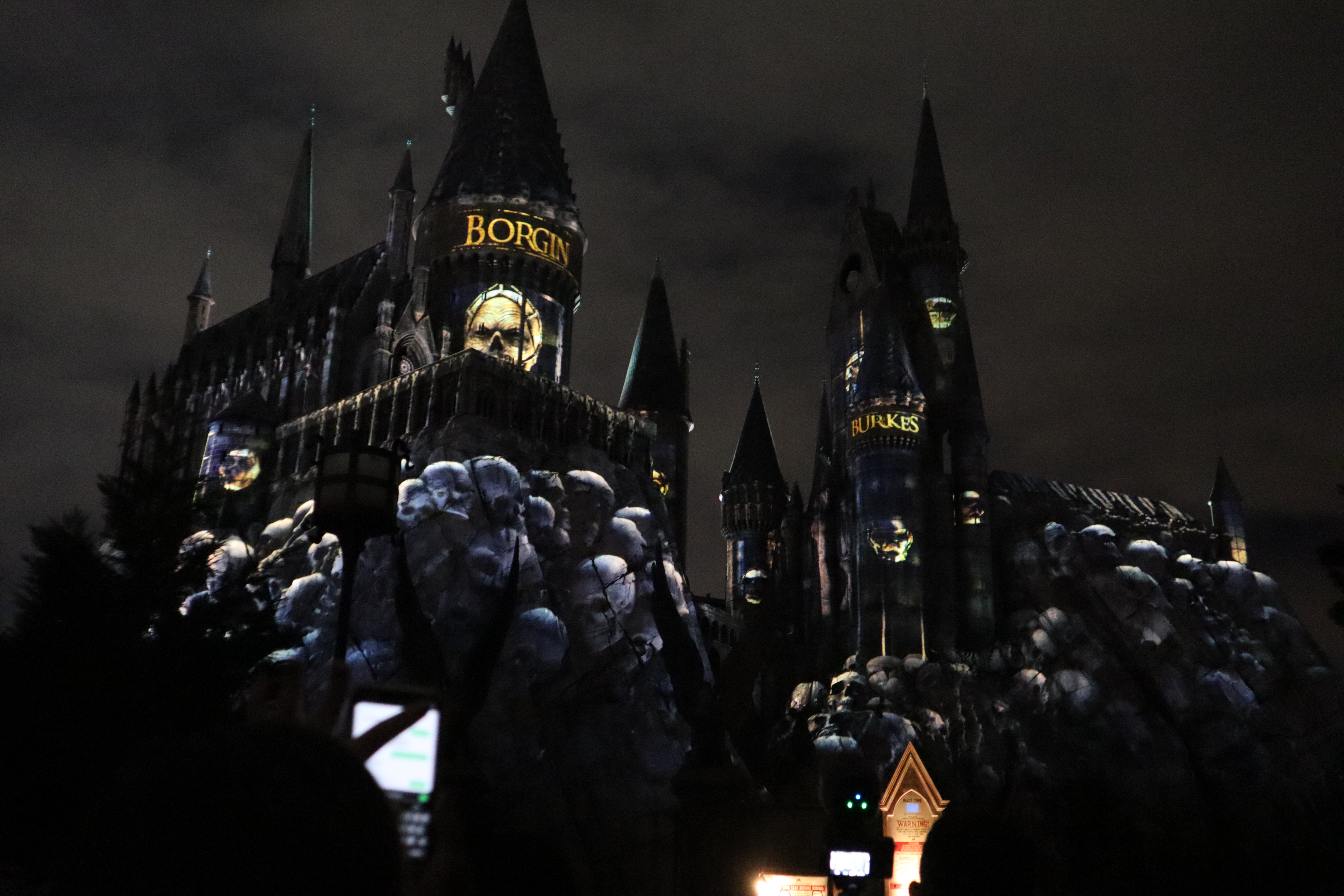 The opening Borgin and Burkes scene of “Dark Arts at Hogwarts Castle.” 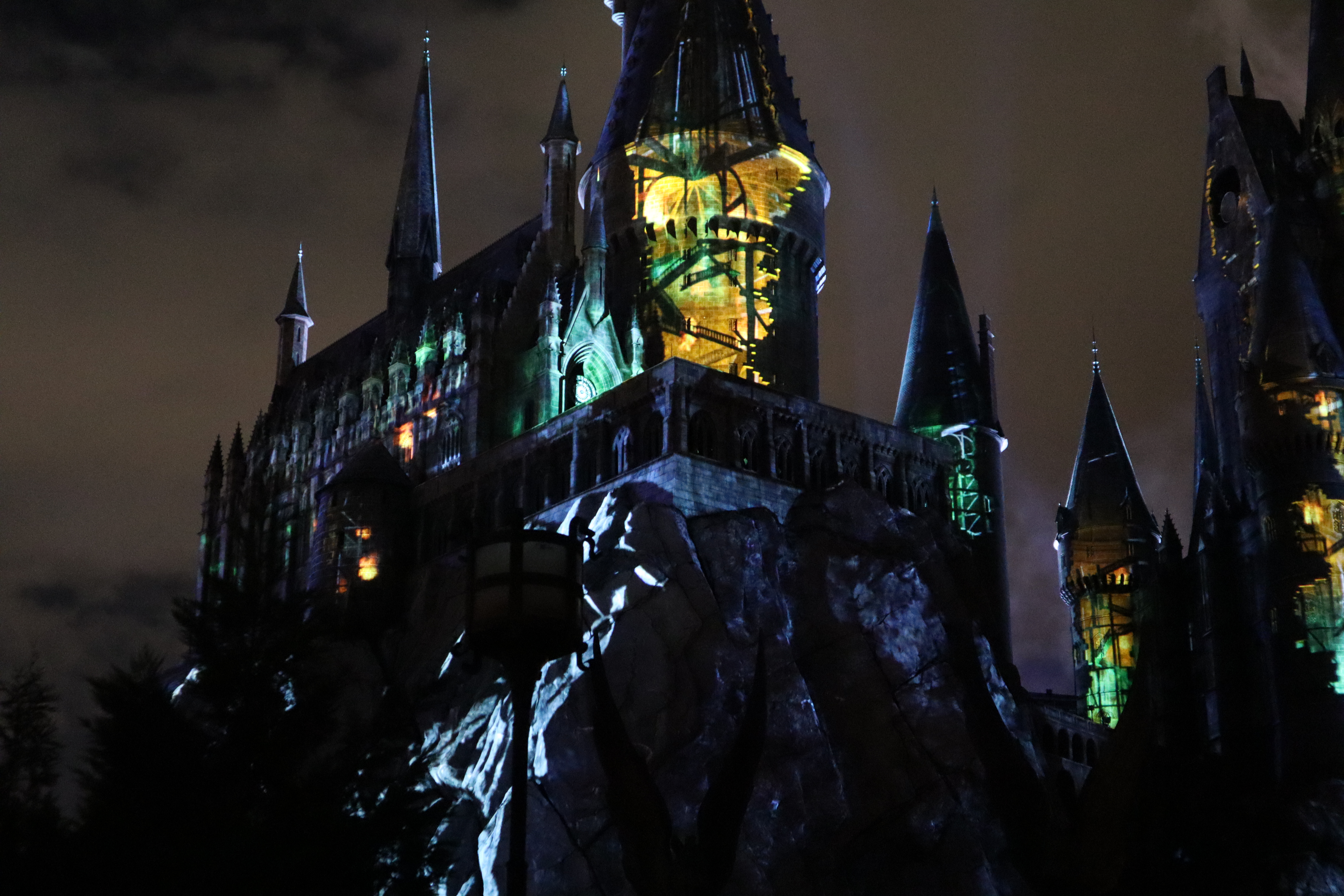 Hogwarts is in shambles after Voldemort’s attack on the castle. 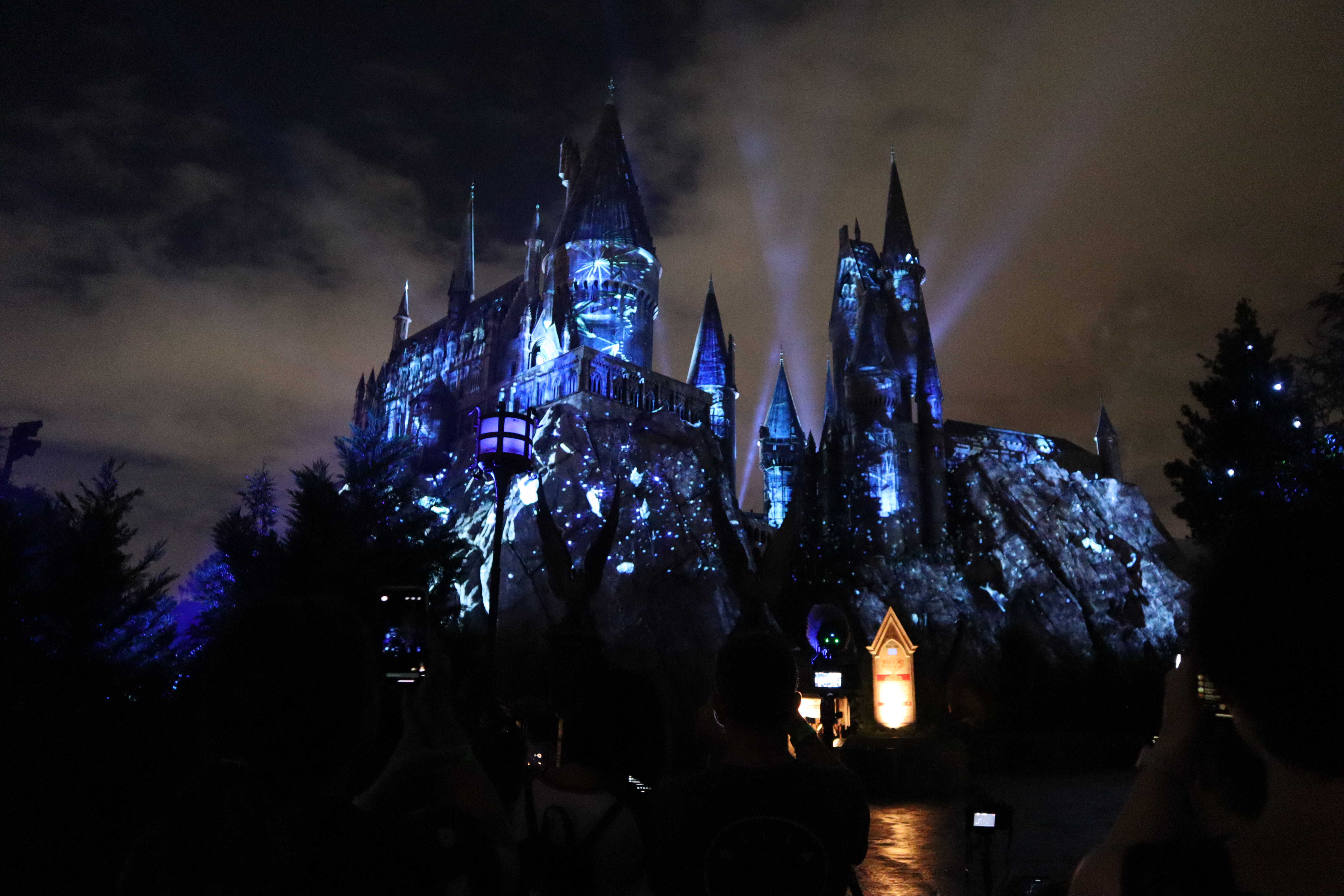 The Patronus Charm prevails and washes away the destruction from Voldemort and the Dark Arts. 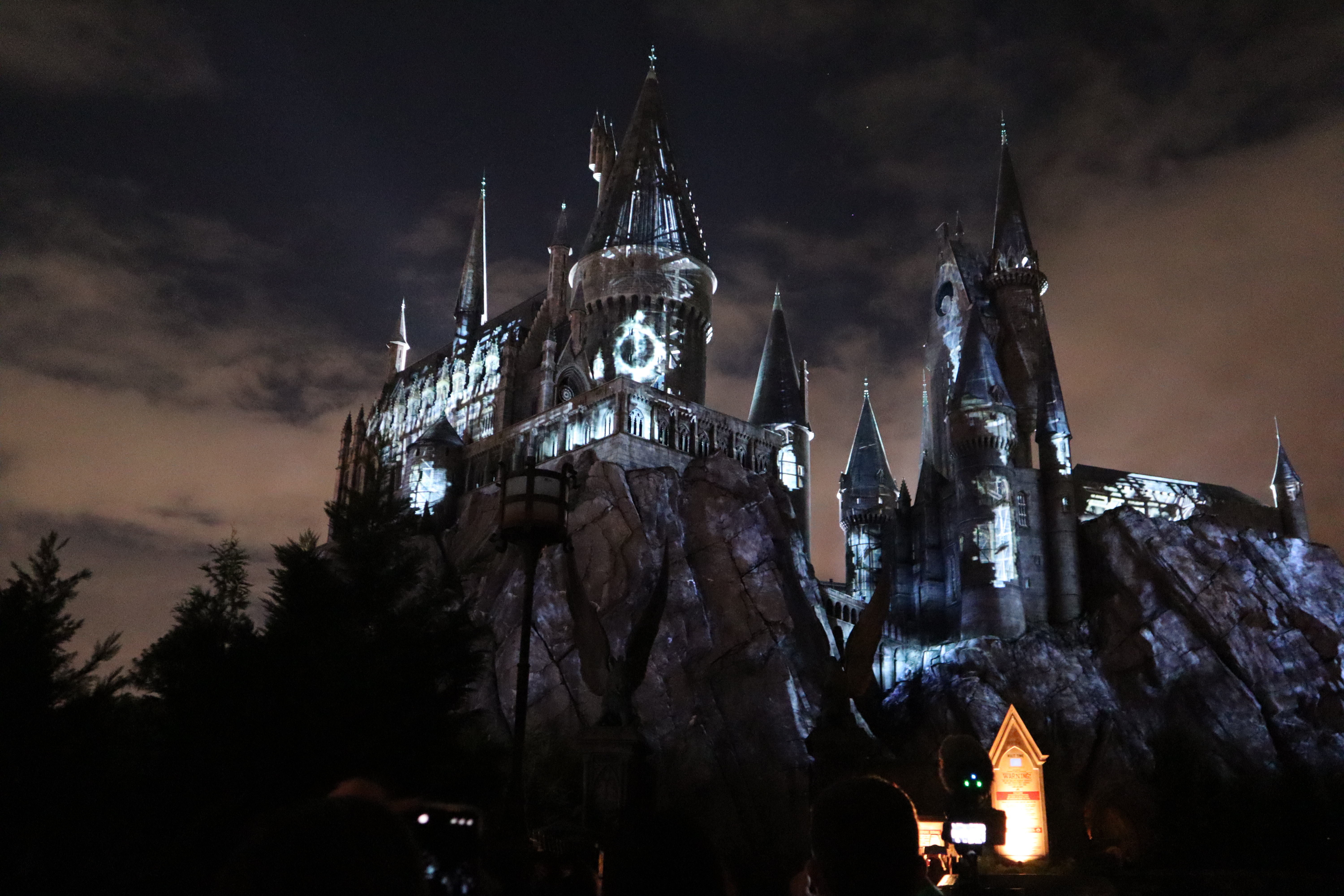 The Deathly Hallows symbol is projected onto the castle. 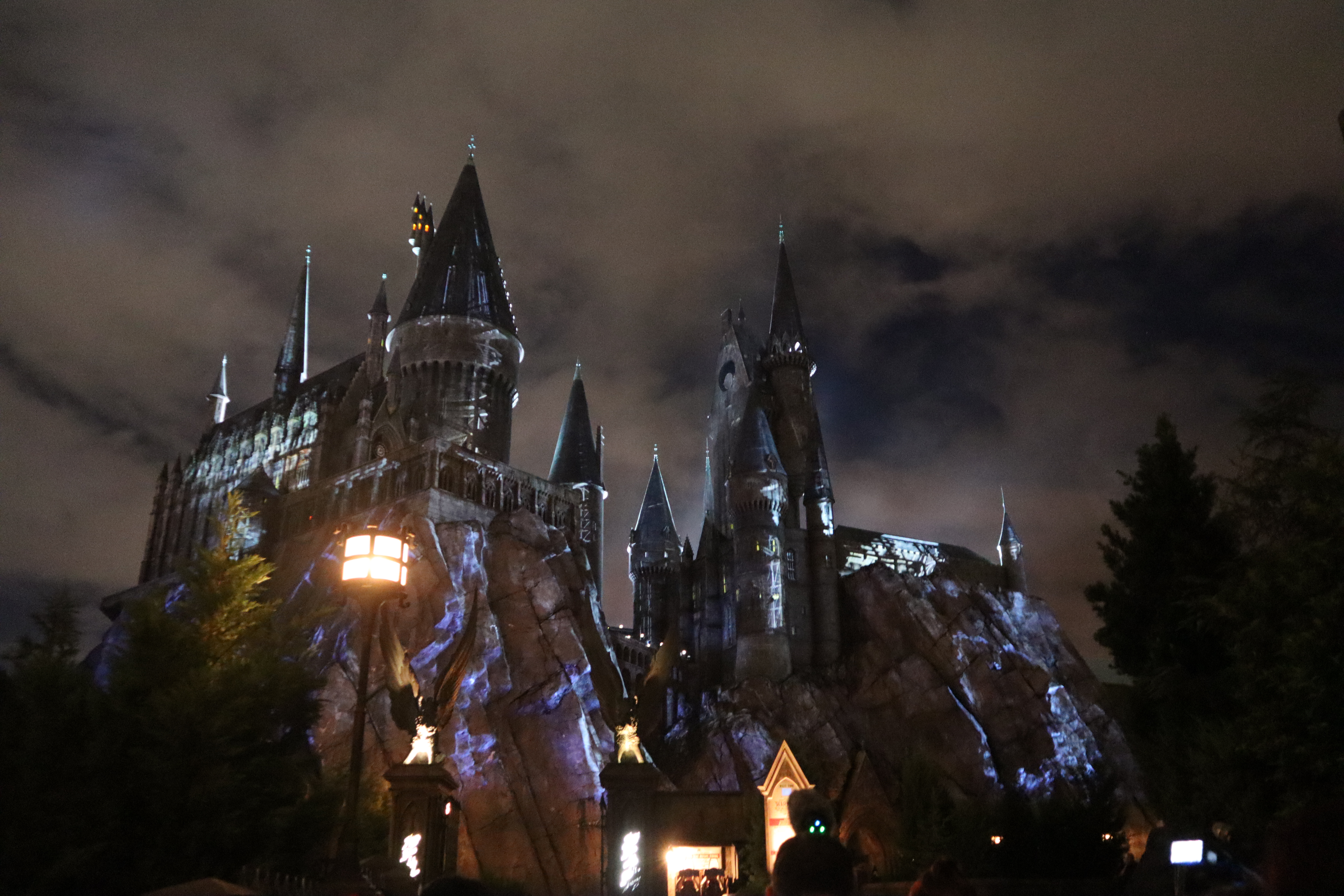 The castle is illuminated before the light show begins.

With our hearts in our stomachs and our fists clenched, Dumbledore’s voice was suddenly heard echoing through the streets: “Happiness can be found, even in the darkest of times, if one only remembers to turn on the light.” We looked up to see the castle being rebuilt, and the music swelled as a majestic stag Patronus appeared at the top of Hogwarts. The show ended with a few fireworks indicating that good always prevails, and the lights returned all around us. We had to contain ourselves and not cheer too hard (if you saw the Twitter livestream, you may have witnessed the play-by-play of our excitement).

If you can make it out to Universal Orlando Resort for the “Dark Arts at Hogwarts” light show, we definitely recommend it. The show takes place on select nights from now until November 15 right as darkness falls on the parks. Bring your wands and cameras and get ready for a Dark Arts spectacular like you’ve never seen before.

“DARK ARTS AT HOGWARTS CASTLE,” AN ALL-NEW, BREATHTAKING PROJECTION EXPERIENCE, IS NOW OPEN AT UNIVERSAL ORLANDO RESORT – BRINGING THE DARKER SIDE OF MAGIC AND DEATH EATERS TO LIFE AT THE WIZARDING WORLD OF HARRY POTTER

Orlando, Fla. (September 16, 2019) – The darker side of the wizarding world has now cast a shadow over [t]he Wizarding World of Harry Potter – Hogsmeade with the debut of the all-new, breathtaking projection mapping experience at Universal Orlando Resort – “Dark Arts of Hogwarts Castle.” Guests will watch as some of the awe-inspiring moments and creatures inspired by the Harry Potter films come to life on Hogwarts [C]astle through state-of-the-art projection mapping, special effects, lighting and more – making this a “must-see” Wizarding World experience.

And guests can now come face-to-face with Death Eaters - devoted followers of Lord Voldemort known for their allegiance and practice of the Dark Arts – while in Hogsmeade. Ominous green light and fog will permeate the village as the Death Eaters eerily roam throughout Hogsmeade, lurking amongst guests – practicing the Dark Arts with complete disregard of wizarding laws.

Then, guests will witness Dementors, Aragog, [m]ountain [t]rolls, Thestrals and other unspeakable creatures cloak the castle for “Dark Arts at Hogwarts Castle.” Guests will be asked to summon their inner strength and bravely face the all-consuming Dark Arts and the visage of the powerful Dark wizard Lord Voldemort until the Patronus [Charm] – ones [sic] of the most famous, difficult and powerful [D]efense [Against] the Dark Arts charms in the [w]izarding [w]orld – is cast.

The Wizarding World of Harry Potter at Universal Orlando Resort allows guests to experience the wonder, excitement and adventure of the Harry Potter books and films in the most spectacularly-themed [sic] environments ever created. Inspired by J.K. Rowling’s compelling stories and characters, [t]he Wizarding World of Harry Potter includes two incredibly detailed lands – Hogsmeade and Diagon Alley – featuring multiple groundbreaking attractions, shops, restaurants, entertainment and more. Guests can visit the famed Hogsmeade [V]illage, enjoy a frothy [b]utterbeer, soar over Hogwarts [C]astle with Harry Potter in the incredible attraction Harry Potter and the Forbidden Journey, pass through the iconic brick wall into Diagon Alley, experience the pulse-pounding next[-]generation thrill ride Harry Potter and the Escape from Gringotts, and more. They can also travel between the two lands with a park-to-park ticket on the iconic Hogwarts Express – allowing them to take the same journey as the famed boy wizard.