When one writes about all things wizarding world, one tends to find some very interesting fan creations. From fantastic events to ingenious decor to a re-creation of the entire Hogwarts Castle built from LEGOs, we’ve seen just about everything.

This next fan creation is definitely one for the books. Jason Reed from Lowell, Indiana, created an entire Harry Potter-themed bar in his basement. 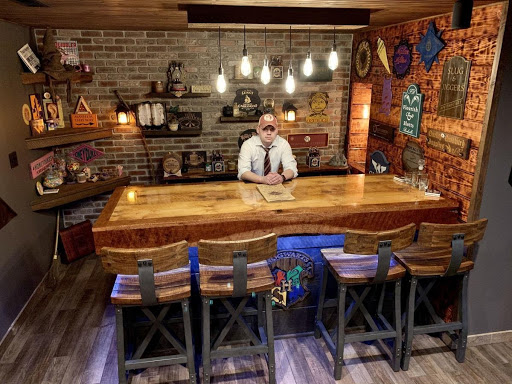 The whole setup looks like something straight out of Hogsmeade. Reed began drawing up plans for the basement bar on the 20th anniversary of the first book, Harry Potter and the Sorcerer’s Stone, but he credits the magic of Harry Potter for his ideas.

We kind of drew it up on the 20th anniversary of the first book. It’s private in my basement. We dedicated a whole area to Harry Potter. We’re big fans. It was such a craze, and a lot of my friends are fans. I just like the fun of it. The magic makes you think outside the box. It’s a different reality.

Reed became a fan of the franchise when he started reading the books. After that, he started watching the movies with his kids. He decided on the Harry Potter theme for his bar as a way to include his family.

We wanted to put a bar in the basement, and I wanted it to have a theme so it was more than just coming down and drinking. I thought Harry Potter was a fun theme with the butterbeer. I remember all the hype and excitement around the books and can go down there and do stuff with the kids as a family.

Most of Reed’s designs are hand-built, including the actual bar itself, many of the fixtures, and the shelves. The process from start to finish took about six months. All around the bar, the walls are covered with Harry Potter paraphernalia. The Sorting Hat sits on a corner shelf, spellbooks are scattered about, and treats from Honeydukes are nothing short of abundant. When the lights go down, small wall-mounted lanterns allow for the perfect amount of magical ambience. There’s even a space to watch the movies! Reed says there was no shortage of decorating ideas coming from the books, films, and his own imagination.

Along with classic bar beverages, Reed has added non-alcoholic butterbeer to the menu. One of the best parts about the bar is that Reed and his family are always updating the decor. On their last trip to the Wizarding World of Harry Potter at Universal Orlando Resort, the family brought home some more trinkets to fill the space, and they’re planning another trip for the future.

I’m going to Orlando soon and will continue to get more items to add and change out. It will never be completed.

We commend the commitment! The Reed family has named their bar the Riddikulus Potter Bar. To see more pictures, check out @riddikuluspotterbar on Instagram.