If there’s one thing the entire Harry Potter fandom can agree on, it’s that you can never ever own too many Harry Potter books. Whether it’s collecting the 20th-anniversary editions of each book as they are released, or saving up to buy every companion book out there, Potterheads like to be in the know of all things magical. If you’ve been wondering whether you’ll get to sink your teeth into some more Potter books this year, we have some good news.

You might have heard of the Harry Potter: Film Vault series. You might even own the first four volumes. The awesome news is that Insight Editions has announced the release of Volumes 5–8 in the collection, and you’re going to want to take the Floo Network to your nearest bookstore and bag them all.

The Film Vault series, written by Jody Revenson, covers everything you could possibly want to know about how the creators of the Harry Potter films brought the magic to life on-screen. A total of 12 volumes will make up the collection. It’s a visual treat, with gorgeous concept art and unit photography straight from the Warner Bros. archive. As if all that magic wasn’t enough, each book also has a unique spine, which forms the Hogwarts crest when you line them up on a bookshelf. Just take our Galleons, please. 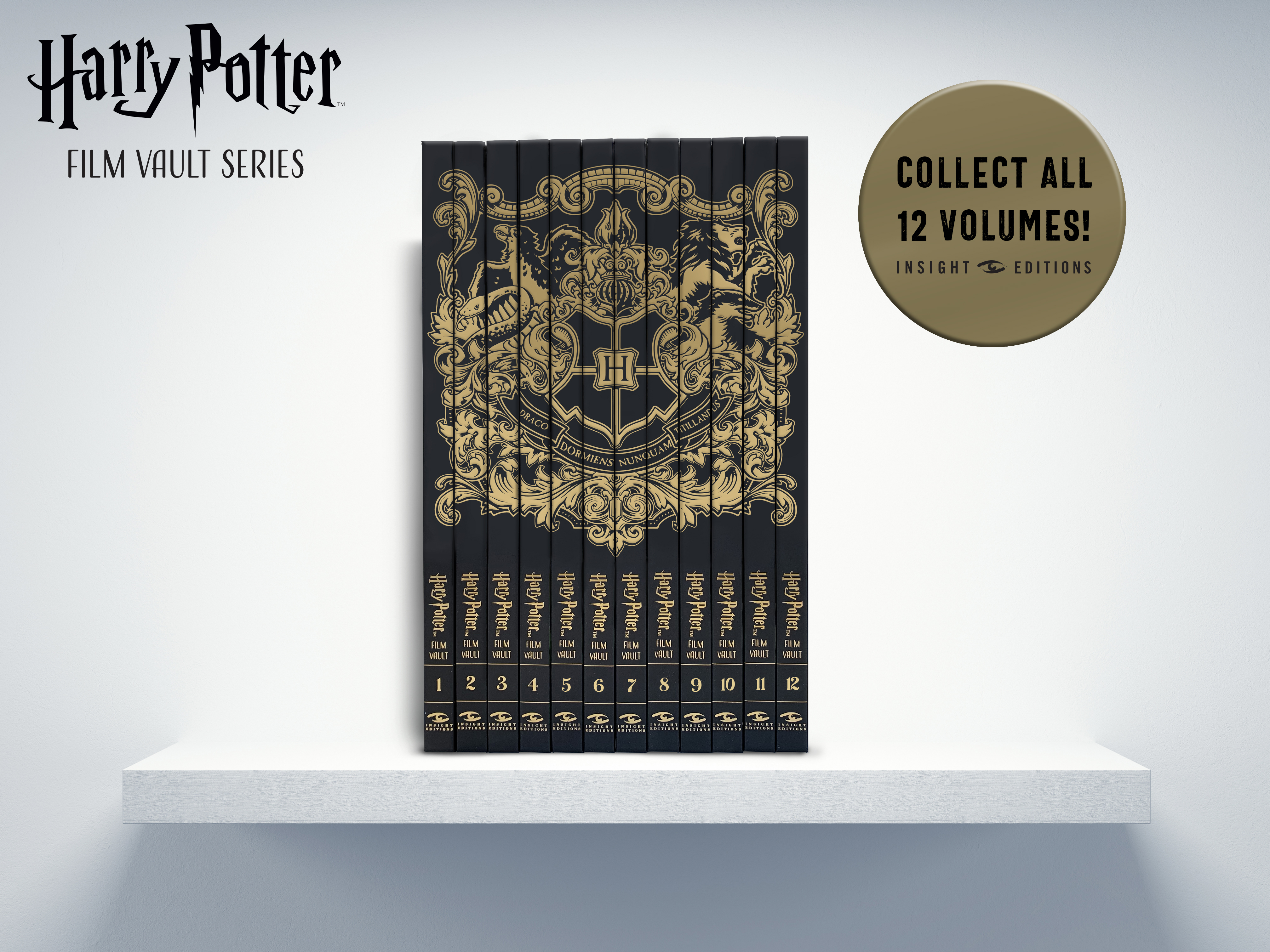 So what can you expect to find in each volume? We’re so glad you asked. 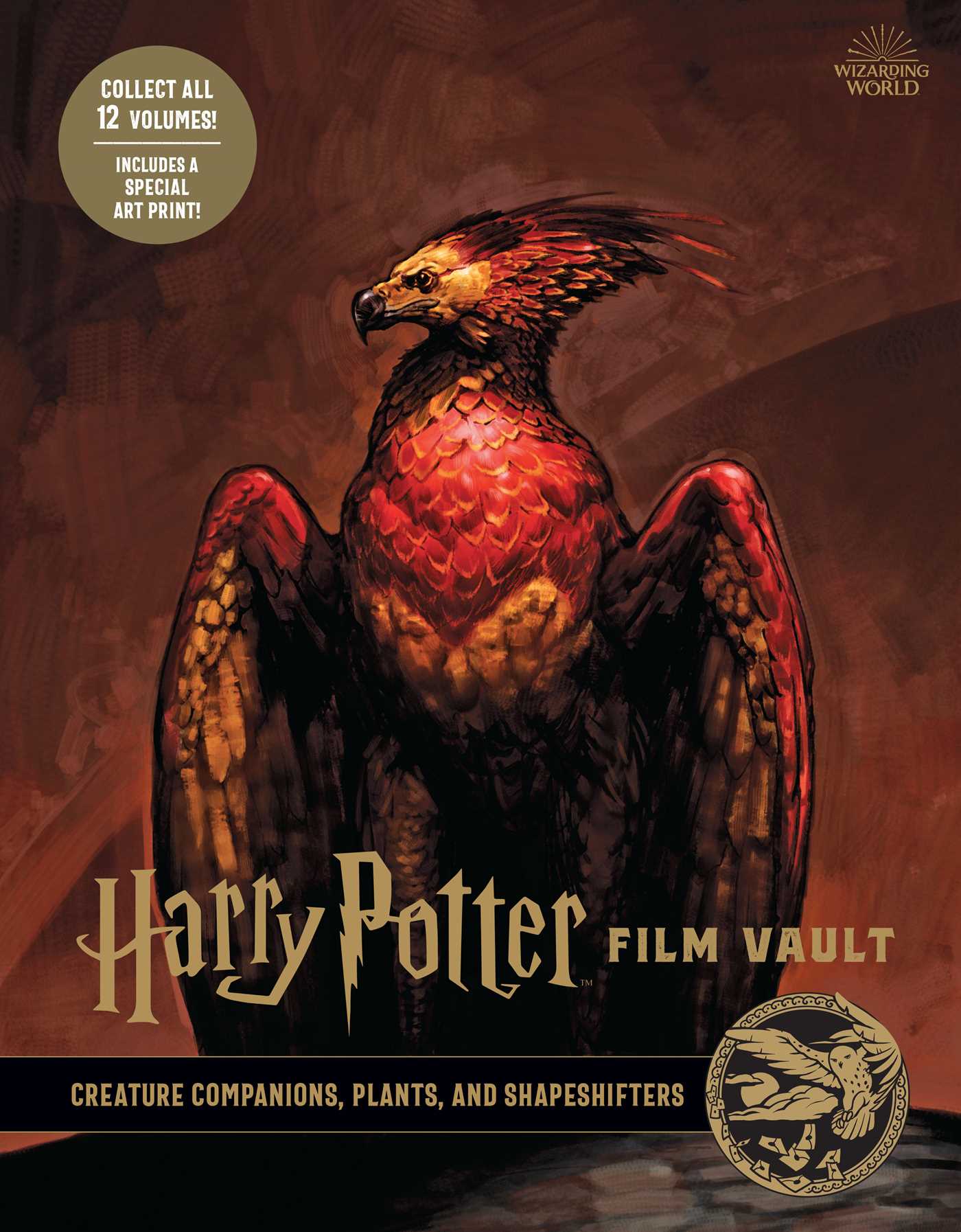 This volume covers everything you ever wanted to know about magical plants, creature companions, and shapeshifters. Including behind-the-scenes photography, painting, and illustrations, this volume will provide you with an in-depth look at how all the magical creatures in the film were developed – from Hedwig to werewolves. 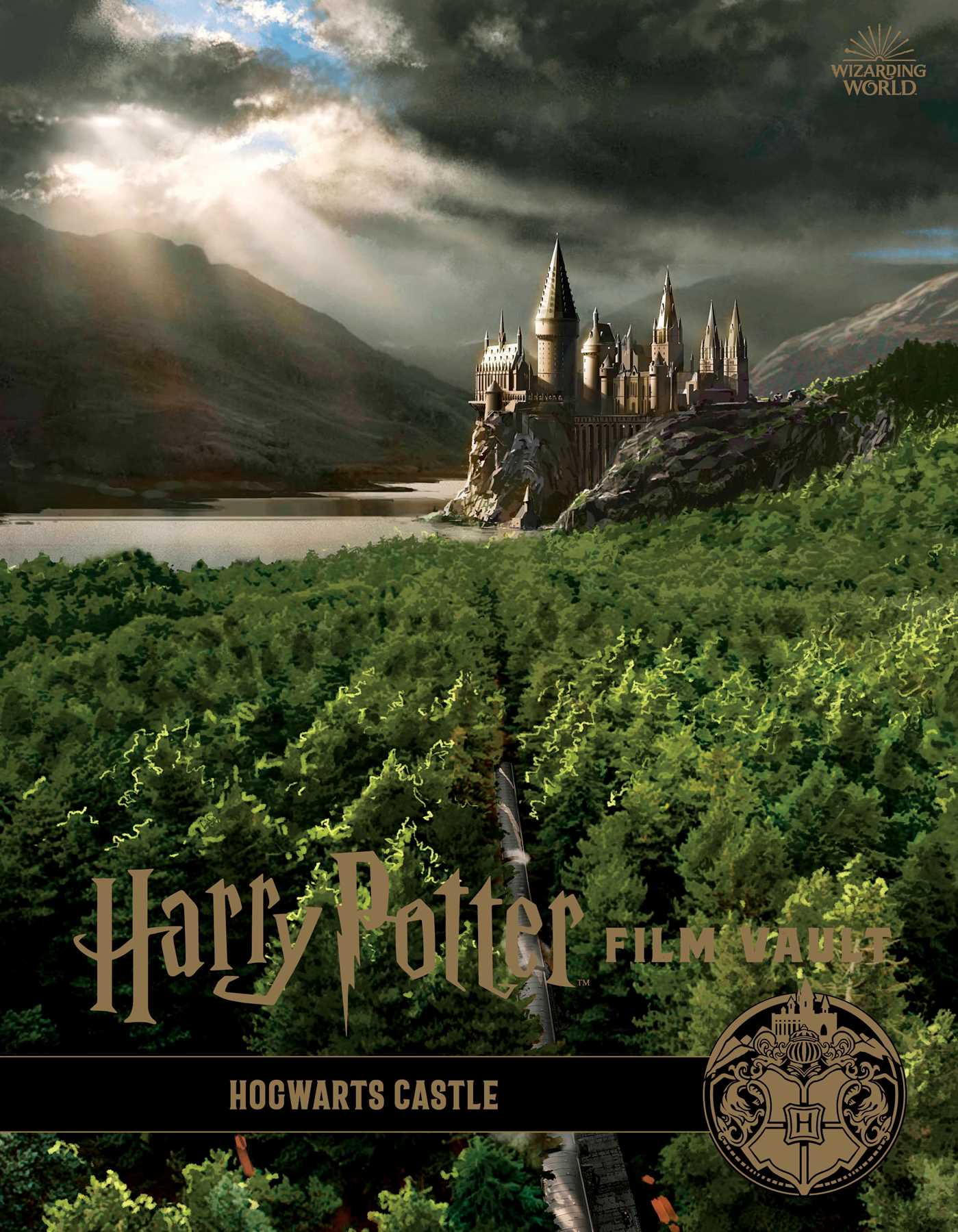 Admit it, this is probably the volume you’re most excited about. Who doesn’t want to discover all the castle’s secrets? This volume holds many answers – from how the moving staircases were created to the talking portraits, secret rooms, and chambers. Again, you’ll be treated to plenty of stunning illustrations that will showcase the making of the castle. 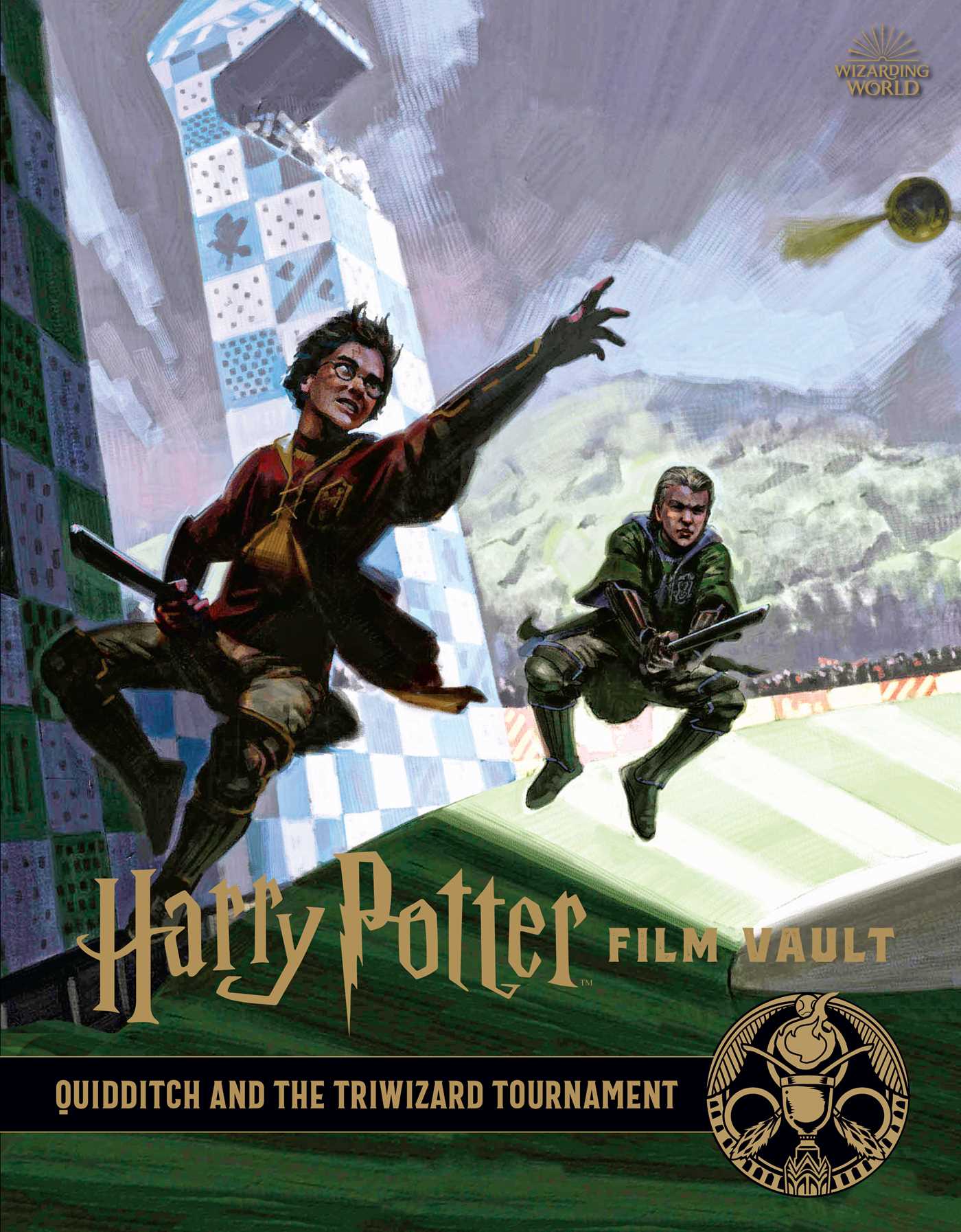 Wizarding sports fans, rejoice! This volume was created with you in mind. Here, you can learn all you’ve ever wanted to know about how a Quidditch game was orchestrated for the screen as well as the tasks performed in the Triwizard Tournament.

Harry Potter: Film Vault: Volume 8: The Order of the Phoenix and Dark Forces 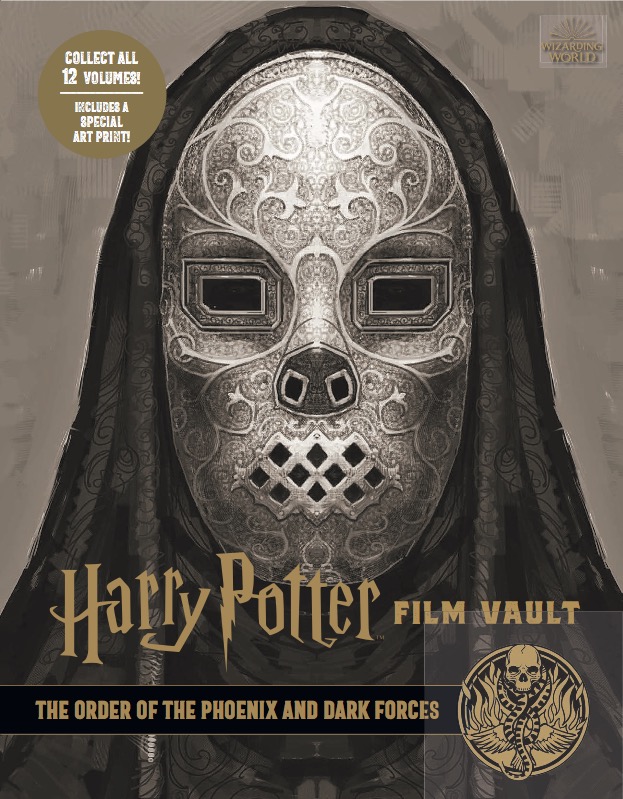 We just know that this is going to be a good one. This volume reveals the secrets of the Order and also covers the Death Eaters and other dark forces seen in the films.

Volumes 5 and 6 were released earlier this month, while Volumes 7 and 8 will be released in March. We don’t know about you, but we are super excited to discover all these new secrets. The only thing better than actual magic is finding out how to create it on-screen. Are you going to collect all the volumes? Tell us in the comments.

Harry Potter: Film Vault, vols. 5-8 The Film Vault series continues to beautifully display filmmaking secrets and visionary artistry behind the Harry Potter films into twelve deluxe collectible volumes. Intricately designed and packed with gorgeous concept art and unit photography from the Warner Bros. archive, each volume in the series gives fans striking insights about how the Wizarding World came to the big screen.

Included in each book is a collectible art print, and collecting all 12 makes a complete image of the Hogwarts crest on a bookshelf, making this series a must-have for all Harry Potter fans and collectors everywhere.

Harry Potter: Film Vault: Volume 5: Creature Companions, Plants, and Shapeshifters (January 2020 | $16.99) Rediscover the creature companions, magical plants, and shapeshifters of the wizarding world. Fans will be treated to an in-depth look at the illustrations, paintings, and behind-the-scenes photography that helped develop everything from Harry’s owl, Hedwig, to werewolves and Animagi.

Harry Potter: Film Vault: Volume 6: Hogwarts Castle (January 2020 | $16.99) From moving staircases filled with talking portraits to secret rooms and chambers, Hogwarts [C]astle is a place full of magic and mystery. In this volume, fans will be treated to an in-depth look at the illustrations, paintings, and behind-the-scenes photography that helped develop the iconic castle seen throughout the Harry Potter films.

Harry Potter: Film Vault: Volume 8: The Order of the Phoenix and Dark Forces (March 2020 | $16.99) From Alastor “Mad-Eye” Moody to Sirius Black and Nymphadora Tonks, members of the Order of the Phoenix play a central role in the Harry Potter films. This volume gives an in-depth look at the secret society and also covers the Death Eaters and other Dark forces that oppose it.