While Helena Bonham Carter will always be associated with maniacal, murderous Death Eater Bellatrix Lestrange for Harry Potter fans, we love it when the actress plays more pleasant roles as well. She’s just as good at being tender, sweet, and vulnerable – even as a dragon. More on that ahead, along with a vampire comedy from one Fantastic Beasts alumnus, an entirely unnerving character poster from another, and all the rest of the latest news on your Wizarding World favorites. Castium Revelio!

Escape from Pretoria, starring Daniel Radcliffe (Harry Potter), and Dirt Music, starring Kelly Macdonald (Helena Ravenclaw) are among two of the pictures that will have their United Kingdom debuts at the upcoming Glasgow Film Festival. Dame Emma Thompson's (Sybill Trelawney) film How to Build a Girl will end the festival, which is opening and closing this year with movies directed by women. The festival runs February 26--March 8, and you can check out the full lineup and pick up tickets on the official website.

The first two episodes of @Servant season 2 are wrapped. Julia Ducournau killed it. Brooding, shocking & cinematic. This is me & our cinematographer Mike Gioulakis with her after last shot. We wish her all the best on her next feature she’s going to shoot back at home in France! pic.twitter.com/1ufNrGH3nT

The Artios Awards were held on January 30 in London, England; New York City, New York; and Los Angeles, California, with Jason Isaacs (Lucius Malfoy) hosting in London. A few projects with Wizarding World ties picked up awards, including Once Upon a Time... in Hollywood and Marriage Story, produced by David Heyman (producer, Harry Potter and Fantastic Beasts), for Big Budget - Drama and Studio or Independent - Drama, respectively; Star Wars: The Rise of Skywalker, starring Domhnall Gleeson (Bill Weasley), Shirley Henderson (Moaning Myrtle), and Warwick Davis (Griphook/Filius Flitwick), and featuring a score by John Williams (composer, first three Harry Potter films), as the winner of the Zeitgeist Award; Game of Thrones - which starred a gajillion Wizarding World alumni over the years, so seek them out here - for Television Series - Drama; and Big Mouth, featuring David Thewlis (Remus Lupin), for Television - Animation.

But we mainly told you this so we could post a picture of Isaacs hosting because the man looks good in black. You're welcome!

Elsewhere, Isaacs will be among the cast of a new black comedy titled Everything I Ever Wanted to Tell My Daughter About Men when it premieres February 20 at the Sam Wanamaker Playhouse at Shakespeare's Globe in London. The play explores the far-reaching impacts of sexual assault, addiction, and teen pregnancy by following a woman's relationship history from the present backward. Tickets are currently available on the Globe's website.

Helena Bonham Carter (Bellatrix Lestrange) and her The Crown costar Olivia Colman were recently on hand in South Hampstead in London to help officially open a new state-of-the-art hall at South Hampstead High School. Bonham Carter is a former student of the school. Ham&High reports the multi-purpose arts space will benefit current and future students, as proceeds from rentals of Waterlow Hall will go toward supporting pupils who couldn't otherwise afford an education at the school. 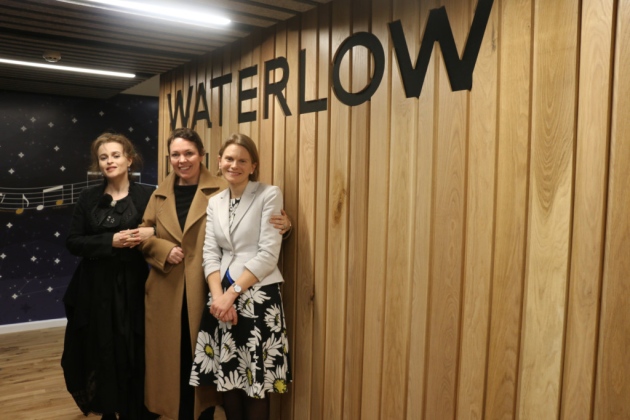 Bonham Carter's recent animated film, Dragonheart Vengeance, also hit Netflix yesterday in the US. The actress voices Siveth, the dragon, in the prequel to the original 1996 movie, which centers around a young farmer who seeks to avenge his murdered family with the help of a mercenary and Siveth. If you'd like a taste of the film before you commit, you can view the trailer below.

Deadline Hollywood reports that Perpetual Grace, LTD, starring Timothy Spall (Peter Pettigrew) will not be renewed for a second season by Epix, but fans won't be left hanging. The series - which has rated high among both critics and fans - will be wrapped up with a limited run of a to-be-determined number of episodes.

Grammy-nominated composer Debbie Wiseman has created a five-track suite inspired by Stephen Fry's (narrator of the UK Harry Potter audiobooks) 2017 book on Greek mythology, Mythos. Fry will narrate his stories over Wiseman's long-form compositions and is excited about the collaboration.

I have known and loved Debbie Wiseman's music for most of my life - to collaborate with her again has been nothing short of rapture. Her music perfectly captures Greek mythology's juicy and joyous mixture of the elementarl and the specific, the noble and the wicked, the ethereal and the earthy.

The tracks were recorded by musicians from the London Symphony Orchestra at Abbey Road Studios in London, and The Mythos Suite is set for a February 21 release. 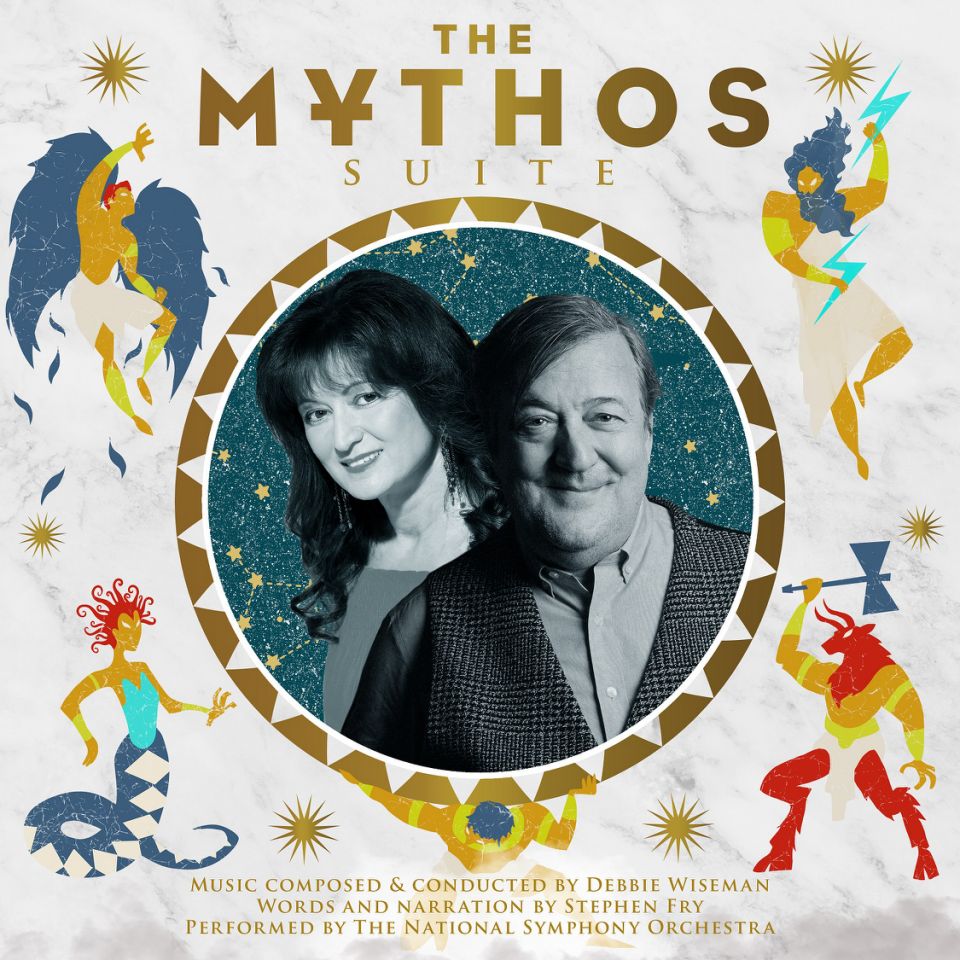 Jude Law (Albus Dumbledore) was making the rounds last week in support of the January 31 release of his thriller The Rhythm Section with Blake Lively, and the actor sat down with Good Morning America to briefly reflect on his career and his son, Rafferty Law, following in his footsteps.

Yves Saint Laurent has begun its summer 2020 collection campaign, with Zoë Kravitz (Leta Lestrange) starring as one of its faces. You can check out a few photos of the actress, along with the campaign video, below. 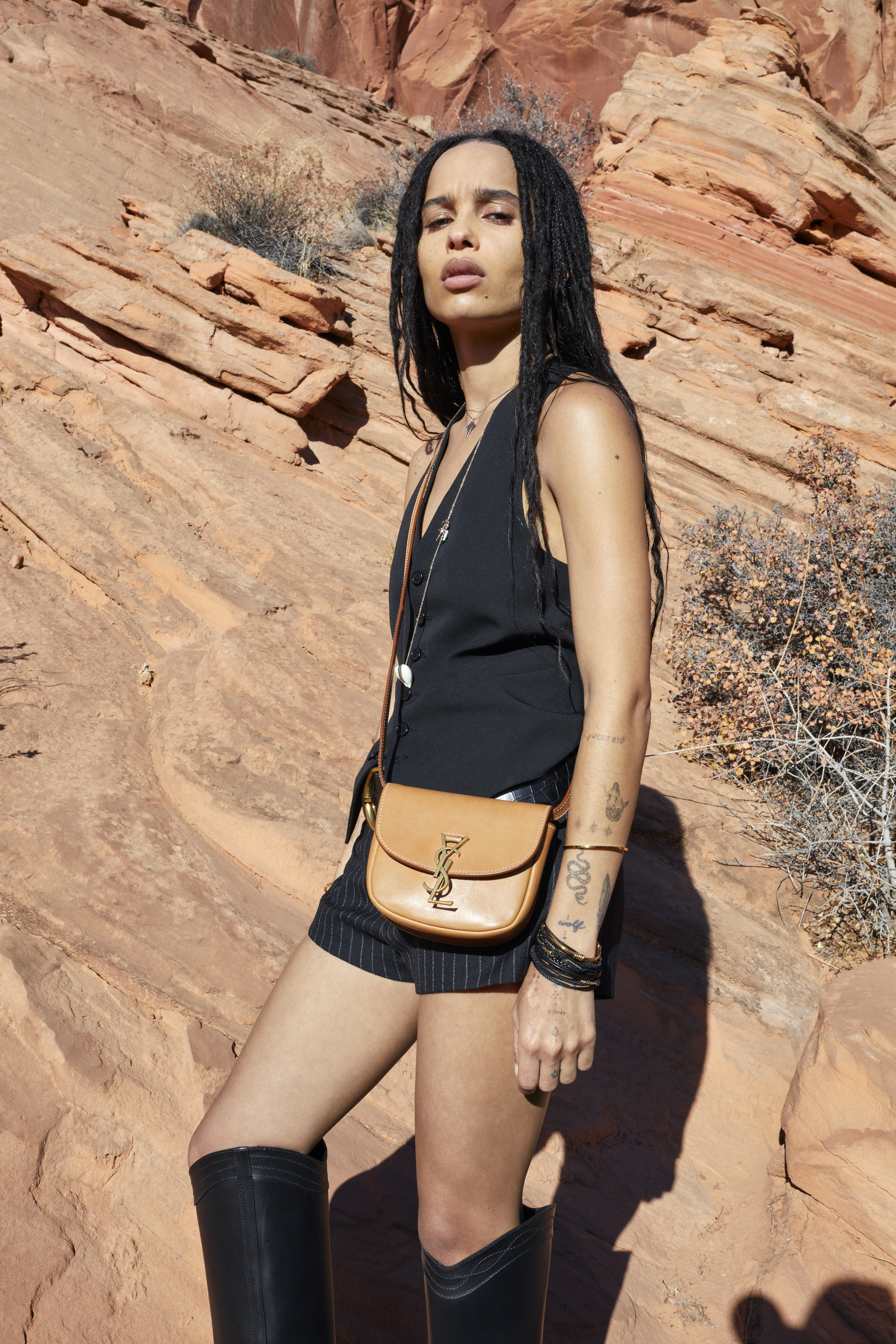 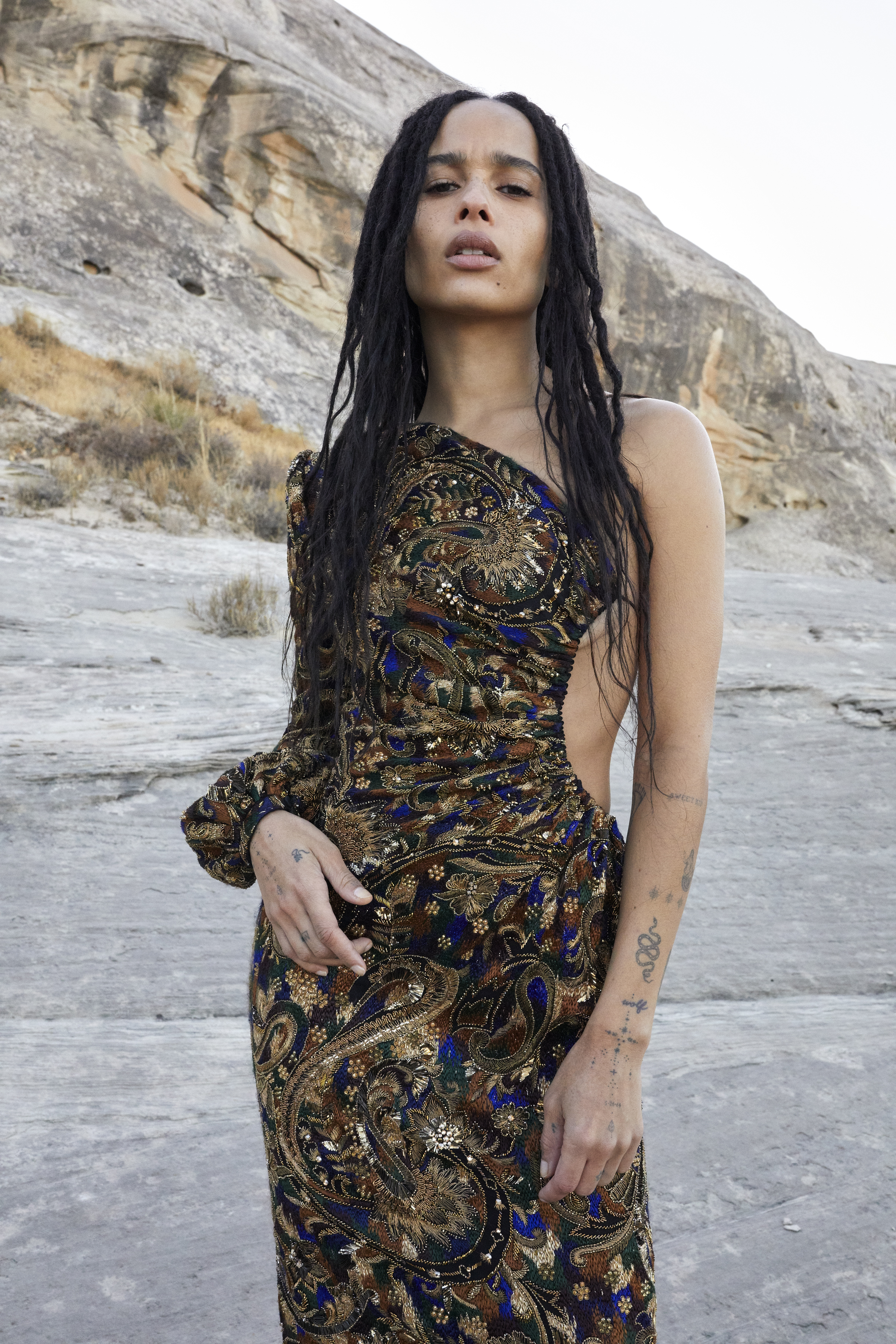 The second half of The Walking Dead's tenth season is coming up February 23 on AMC, and the network released a new set of character posters last week, including one featuring Samantha Morton's (Mary Lou Barebone) Alpha. It's not terrifying. Not at all. 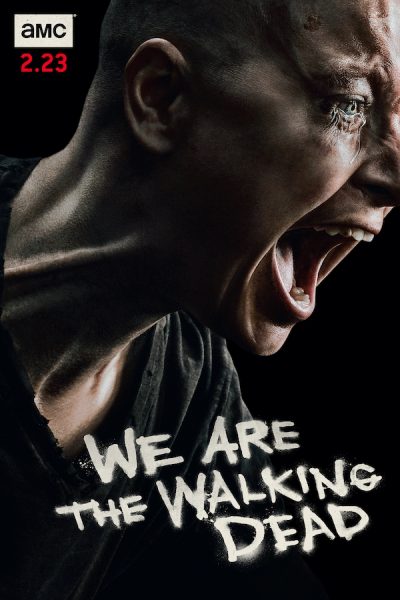 An Iceland horror-comedy centered around a 1,000-year-old, single, gay vampire recently made its premiere at the Goteborg Film Festival's Nordic Film Market, and distribution company LevelK has acquired the rights, Variety reports. Thirst, which follows the story of a woman suspected of causing her brother's death who befriends the above-mentioned vampire, features Ingvar Sigurdsson (Grimmson) as Logga. There's no word yet on where the movie will be distributed.

Elsewhere in Iceland, a new eight-part political series is being developed by Nordic production company Sagafilm, and it's set to star Ólafur Darri Ólafsson (Skender). The Minister is set to premiere later this year, and Variety reports that Sagafilm CEO Hilmar Sigurðsson says the "charm and charisma that Ólafur Darri brings to the conflicted character is unique, and we are extremely excited to see how his unorthodox way of doing things touches viewers around the world." You can read the official synopsis below, and we'll keep an eye out for the release date!

'The Minister' centres on Benedikt Rikhardsson (Ólafsson), a populist politician who becomes Iceland's Prime Minister. However, Benedikt is suffering from an underlying bipolar disorder which progressively worsens. The Prime Minister's team and their allies are forced to endanger both the stability of the government and their private lives to hide his illness while others abuse it.

Anthony Boyle (Scorpius Malfoy, original West End and Broadway runs) is starring in The Plot Against America, a six-part miniseries based on the novel of the same name by Philip Roth, and HBO has released the show's first official teaser. The series imagines an alternate American history in which a working-class Jewish family in New Jersey watches the political rise of Charles Lindburgh as he becomes president and turns the nation toward fascism. It also features the talents of Winona Ryder, Zoe Kazan, and John Turturro. Boyle plays Alvin Levin, the patriarch's angry and intelligent nephew who turns from a life of crime to the battlefields of Europe and back in his quest to overcome his family's hypocrisy.

ScreenSkills, the industry-led skills body for the United Kingdom's screen-based creative industries, and UK-based production company Dancing Ledge have teamed up to help burgeoning screenwriters break into the business. The ScreenSkills New Writers Program pairs promising talent with established mentors who assist them with industry introductions and preparing to pitch their work, the Guardian reports. Among those mentors is Jack Thorne (writer, Harry Potter and the Cursed Child).

Thorne has been mentoring actor/writer Sharma Walfall, who is currently developing several original series ideas. After winning a Northern Writers Award in 2015, Walfall was commissioned for her first television credit, an episode of the popular British soap opera Hollyoaks. She's currently working on a drama centered around a pupil referral unit, and Thorne has been impressed with his own pupil.

Sharma describes the complication of these kids. We live in this broken and embittered country, and this is about broken and embittered kids. It tells the truth of how difficult these places are and how hard it is for kids to get back on their feet. Yet their are glimmers of hope and humanity - it's also a celebration. [...] What's most important is to have a voice that's recognised and supported. And we all need luck, though I've no magic formula to acquiring it. The great thing is Sharma has already sent the script out, and people are meeting her and want to be in the Sharma business. 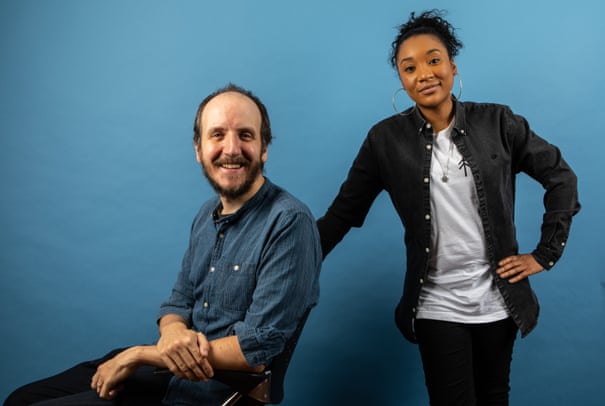 That’s it for another edition of MuggleNet’s Casting News! Let us know in the comments which Wizarding World stars you’d most like us to keep up with, and try to keep Samantha Morton out of your nightmares!