Put a Little Love in Your Heart: “Hogwarts Mystery” and “Wizards Unite” Theme Up for Valentine’s Day

Valentine’s Day is just two days away, and you know what that means, wizarding world gamers! Stay out of the gift shops on Friday, because they’ll be filled with forgetful partners scrambling for cards and chocolates. But it also means Harry Potter: Hogwarts Mystery and Harry Potter: Wizards Unite are spreading the love. So get gussied up for your second romantic date in Hogwarts Mystery, and grab your tissues as Wizards Unite explores some of the wizarding world’s tragic love stories. Phones at the ready!

We'll start this week with Hogwarts Mystery, since its February special event is the least tear-jerking. Despite a stated start date of February 13 for the Valentine's Day at Hogwarts side quest, the quest commenced just a few hours ago. So if you've achieved Chapter 3 of Year 5 or beyond, report to the Great Hall! Your romantic journey awaits.

Judging from the screenshots released by Jam City, this year's Valentine's quest seems very similar to the last in that your character will be offered a special selection of outfits by resident style guru Andre Egwu, everyone is up in your business again at Madam Puddifoot's Tea Shop, and Severus Snape still wants you to stop having emotions in his general vicinity. 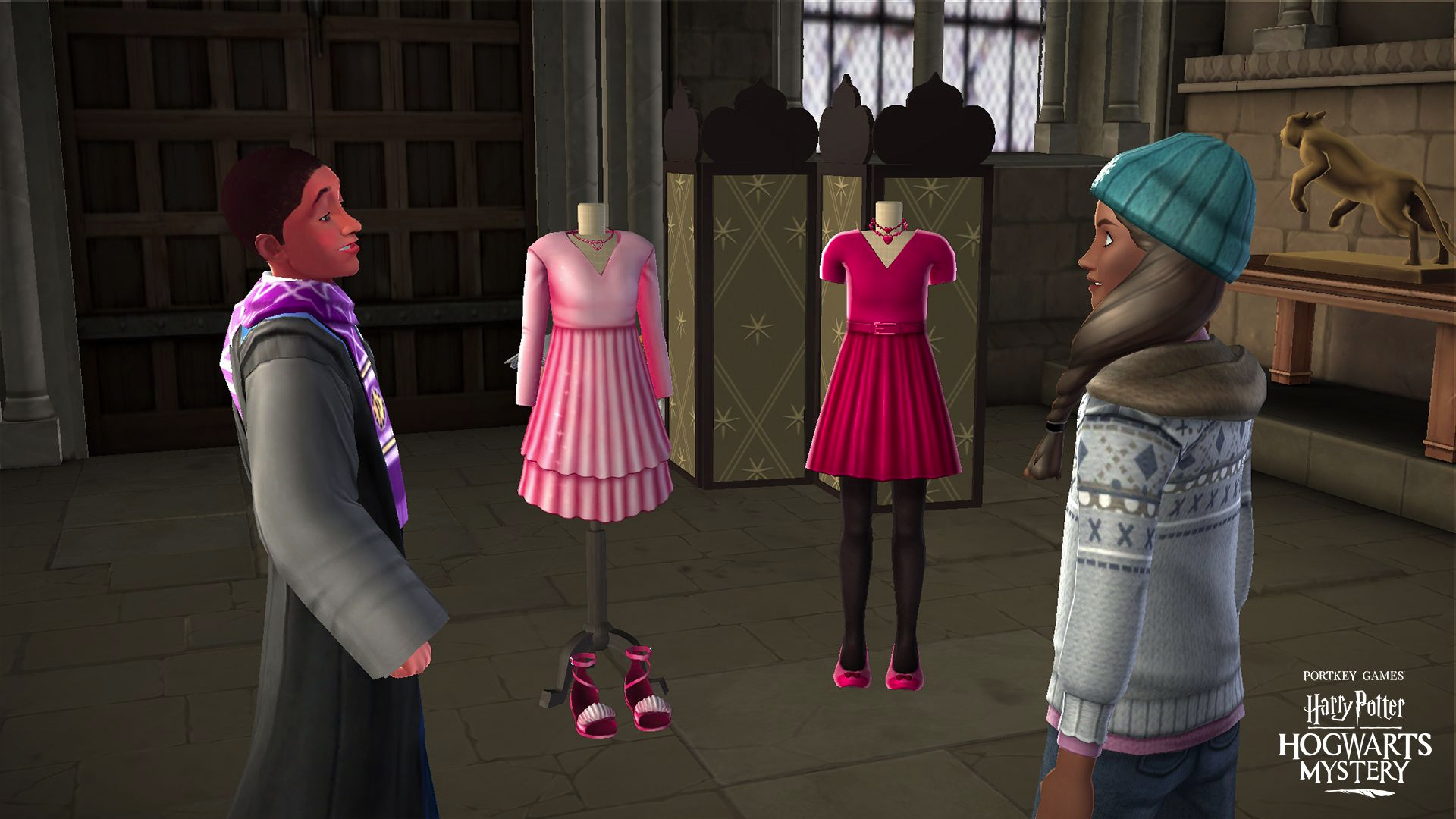 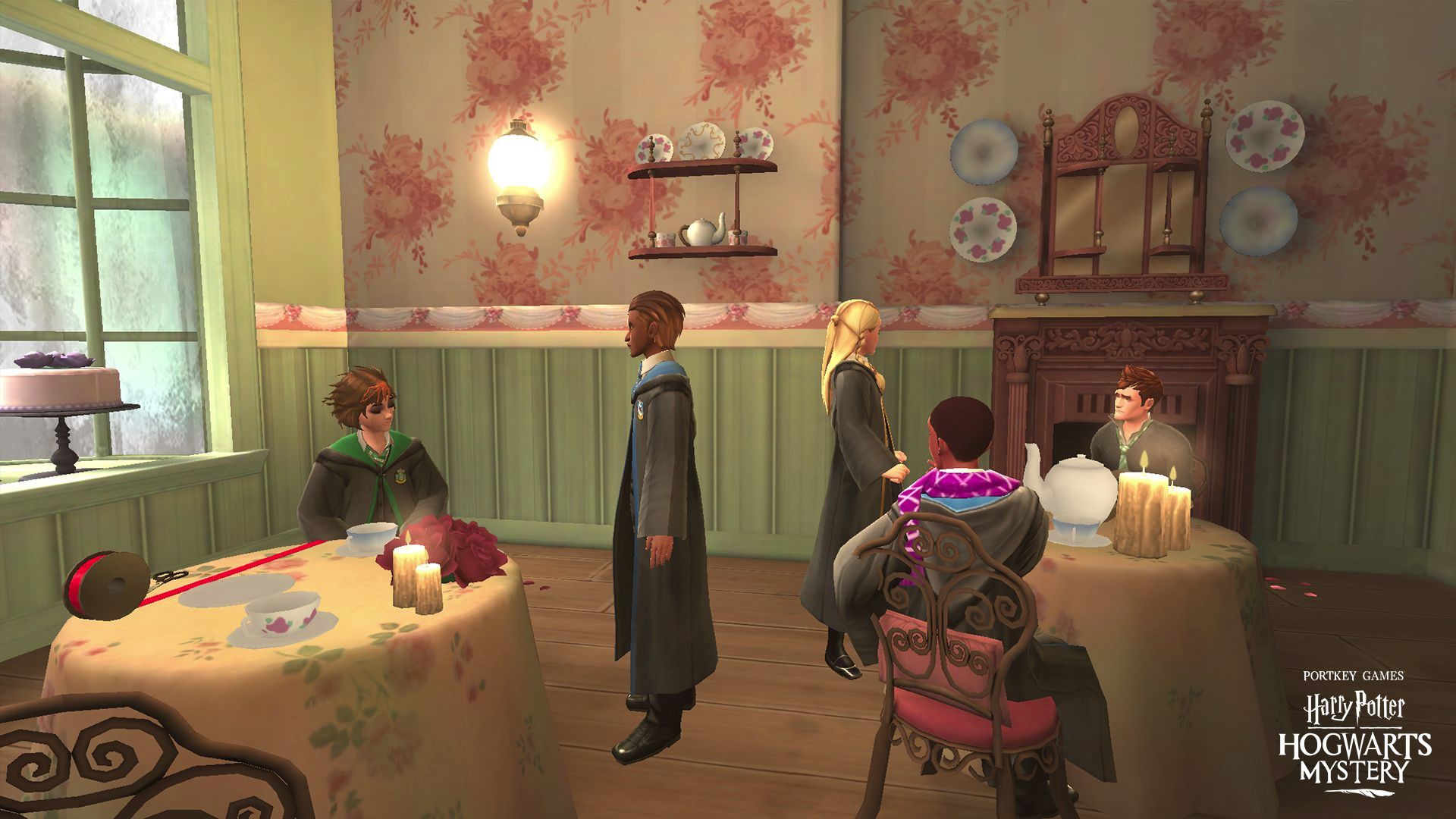 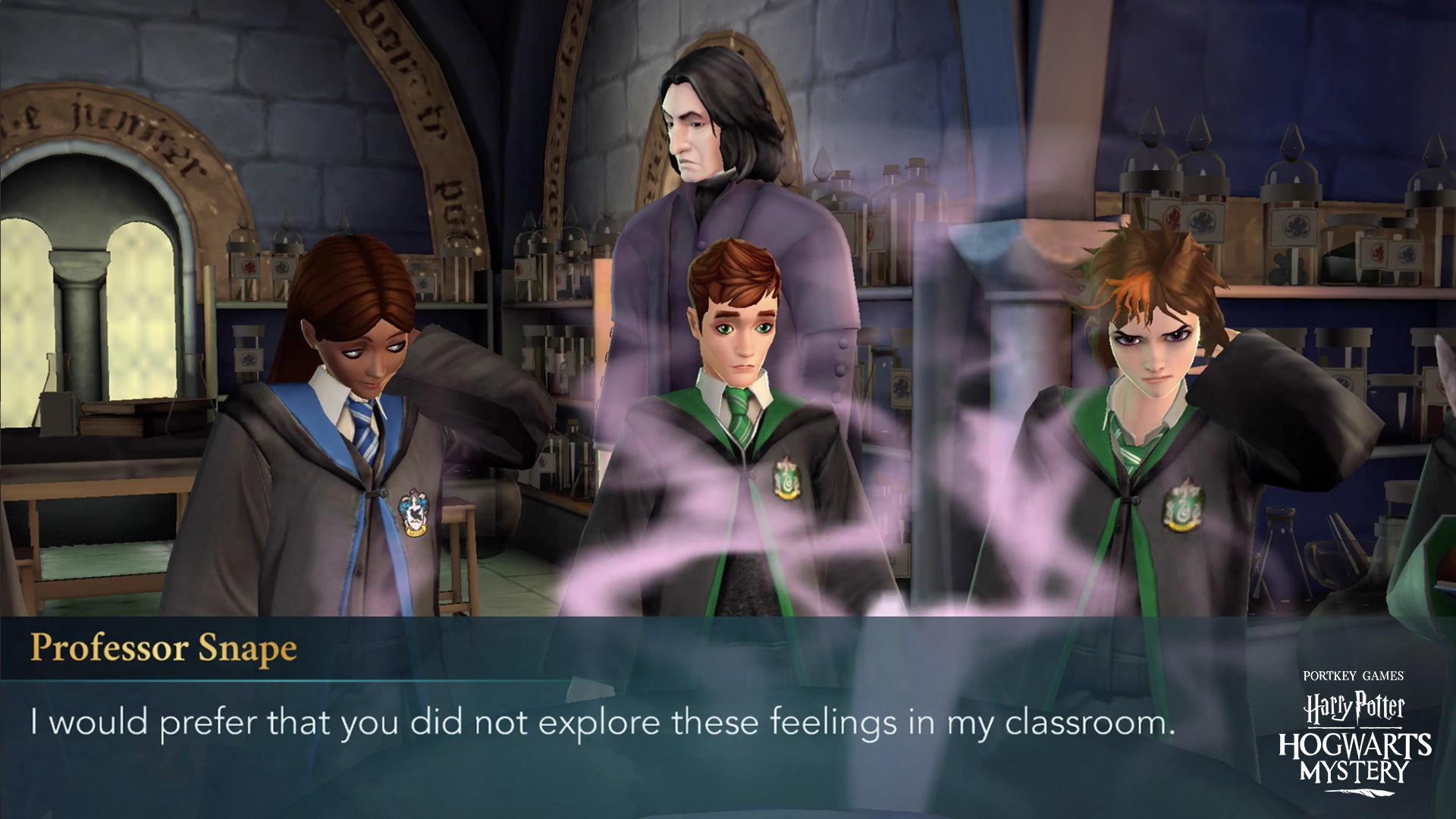 Of course, the buildup to your second big date will no doubt be different, and you always have the option of dating someone new. Your choices will include Penny Haywood, Barnaby Lee, Andre Egwu, Merula Snyde, and Talbott Winger. Still no Charlie Weasley (sigh), but we'll try to soldier on. And hey, at least in a fun, virtual Valentine's Day environment, you won't have to deal with any egomaniacal, self-aggrandizing creeps who... Oh, crap. 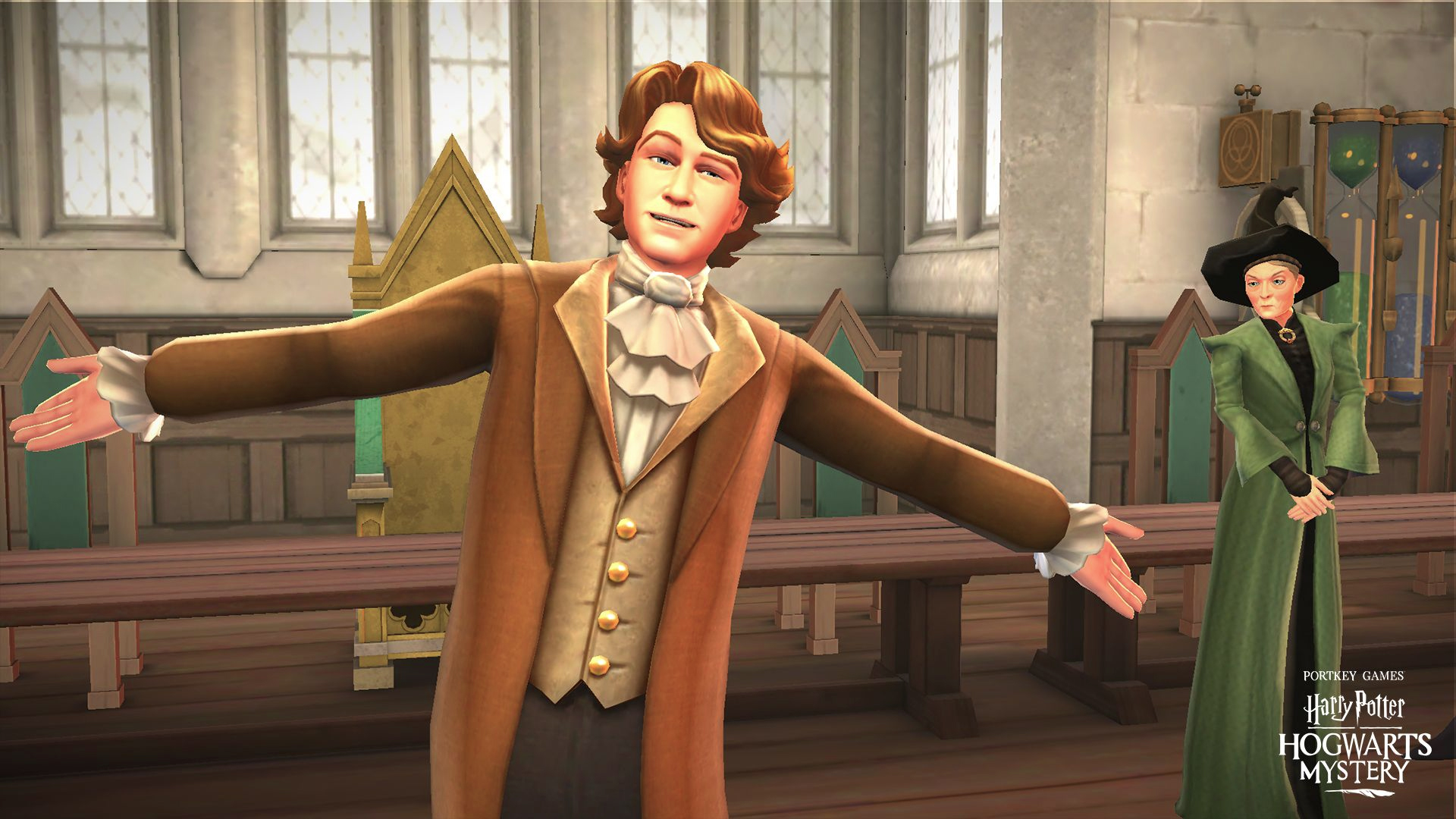 The storyline [sic] also features a wizard known for his luscious golden locks, the iconic Gilderoy Lockhart, who tasks the player and their group of friends with planning his Valentine[']s bonanza.

Well, that sounds like a good time waiting to happen! In addition to your side quest, be on the lookout for Valentine's Day-themed prizes included in events and bundles, such as hairstyles, outfits, makeup, and one particularly fluffy Kneazle kitten. "The excitement of friendship turning into something more is part of student life, and we're excited to launch this romantic sidequest [sic] for players to have the chance to connect with their crush in the game," said Sarah Wolf, game director at Jam City. "It's something our players love."

Some of your players also love Charlie. Just sayin'. Don't forget to use the hashtag #HPHM when sharing your romantic adventures on social media! Beyond Valentine's Day at Hogwarts, your character is also likely moving into the second phase of their Quidditch career, which we touched on last time, so get those arms limber for your impending Beater training! As for the story line, we're going to leave it alone again this week because who really has any idea how far anyone else has progressed in this game.

Wizards Unite has got us looking so crazy in love right now, and by total coincidence, that's also the name of the game's ongoing mini-event. You may have noticed a recent influx of Oddities Foundables, including the Three-Headed Dog, Azkaban Escapee, Vampire, and Werewolf. They're all apparently Crazy in Love... with the thought of making a snack out of you.

The Calamity has begun meddling with affections in the wizarding world, and a host of Oddities have fallen under its amorous influence. Though these ravenous Oddities are eager to meet you, ensure you don't fall for their charms, and make sure to counter with some of your own!

We've all dated our share of weirdos, but we have to draw the line somewhere. Instead, just blast these baddies. The Tonic for Trace Detection will increase your chances of encountering them, and if you have a little gold burning a hole in your pocket, you can also take advantage of a special offer on Healing Potion: 20 bottles for 250 coins! The Crazy in Love Event ends at 11 a.m. (Pacific) Thursday, so hurry along!

Thursday will also mark the start of a new Brilliant Event: Lost Love Part 1! From 2 p.m. (Eastern) February 13 until 2 p.m. (Eastern) February 20, you'll be working to acquire items relating to Professor Minerva McGonagall, including a photo of her long-lost love, Dougal McGregor. If you aren't familiar with that story, you'll have to read it on your own because it's sad. 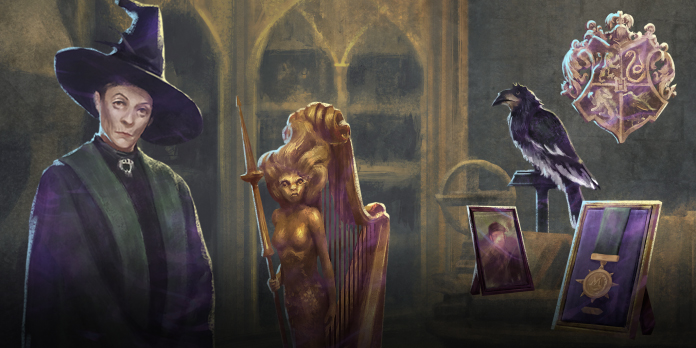 You'll find Brilliant Minerva McGonagall and the Brilliant Self-Playing Harp in wild encounters; receive a Brilliant Hornbill, the pet bird owned by McGonagall, and a Brilliant Hogwarts Crest by completing event tasks; pick up a Brilliant Order of Merlin by unlocking Brilliant Portkey Portmanteaus and entering the brand-new location of Madam Puddifoot's Tea Shop; and earn a Brilliant Photograph of Dougal McGregor by completing Wizarding Challenges with event-specific Runestones.

You'll also notice that only ingredients specific to Baruffio's Brain Elixir, Strong Exstimulo Potion, and Tonic for Trace Detection will be appearing on your map. There's a good reason for that: Wizards Unite is trying out an incentive program of sorts during this Brilliant Event. Once you've placed the image of Brilliant Minerva McGonagall, the number of Traces revealed by Tonic for Trace Detection will increase from 10 to 15. Place the Brilliant Order of Merlin and Baruffio's Brain Elixir will increase in effectiveness from doubling your XP to increasing it by two-and-a-half times, and placing the Brilliant Photograph of Dougal McGregor will bump the amount of spell casts granted by Strong Exstimulo Potion from four to six!

Your event prizes will include the usual Spell Books, Restricted Section Books, and gold, plus a Transfiguration Today Front Page Portrait Frame, a Luna Lovegood-Themed Portrait Frame, and a new title option for your Ministry of Magic ID: Concoction Connoisseur. As always, don't forget to pick up your free bundle in the Diagon Alley Shop, and look out for the bonus assignment once you've completed all the tasks.

We'll be back next week to give you all the details on February Community Day, set for February 23, and Part 2 of the Lost Love Brilliant Event, which runs February 25--March 3, so keep an eye out!

Go on a Romantic Date with Your Valentine

February is full of exciting storylines [sic] and in-game features, welcoming a new season of Quidditch, new bundles, and an iconic character from the original series!

Who: Jam City, a Los Angeles-based mobile games studio, and Portkey Games, a label from Warner Bros. Interactive Entertainment dedicated to creating new Wizarding World mobile and video game experiences that place the player at the center of their own adventure.

What: Starting on February 13, Harry Potter: Hogwarts Mystery players who have progressed to Year 5 Chapter 3 or later will have the opportunity to go on a romantic date with their crush! In this new special time-limited sidequest [sic] storyline [sic], the player will choose their in-game crush from six [sic] fellow Hogwarts students: Penny, Andre, Merula, Barnaby, and Talbott. The storyline [sic] also features a wizard known for his luscious golden locks, the iconic Gilderoy Lockhart, who tasks the player and their group of friends with planning his Valentine[']s bonanza. With help from everyone’s favourite fashion expert, Andre, players will also get to choose their ideal outfit, perfect for a romantic night out.

Quote: “The excitement of friendship turning into something more is part of student life, and we’re excited to launch this romantic sidequest [sic] for players to have the chance to connect with their crush in the game. It’s something our players love,” said Sarah Wolf, game director at Jam City.

To complement this special adventure, Harry Potter: Hogwarts Mystery will be releasing a series of fun events and bundles that award Valentine’s Day-themed outfits, hairstyles, makeup and even a kitten Kneazle! February also marks the start of the exciting second season of Quidditch, where players will have the opportunity to try out the position of “[B]eater” on the Quidditch team.

Harry Potter: Hogwarts Mystery is the only mobile game where any fan can live their fantasy of attending Hogwarts School of Witchcraft and Wizardry. In this award-winning narrative RPG ([r]ole[-p]laying [g]ame), players participate in the iconic rites of passage of life at the school, from being [S]orted in Year 1 to becoming a prefect in Year 5, while exploring the secrets of Hogwarts and its grounds. True to life in the Wizarding World, players advance through their seven years of schooling at Hogwarts, attending classes, learning magical skills, and forming friendships and rivalries with other students, while investigating an original, unfolding mystery.

For more details on Harry Potter: Hogwarts Mystery and to connect with other fans, visit
www.facebook.com/HPHogwartsMystery/ [and] www.twitter.com/HogwartsMystery, and for more
information, visit www.HarryPotterHogwartsMystery.com/.