This is the opinion of the author and not MuggleNet as a whole. However, the overwhelming majority of the fandom and MuggleNet volunteers would agree with the arguments the author provides.

A previous version of this article was published prior to going through editorial review. You can read the original article and our comments here.

While MuggleNet was away, J.K. Rowling made headlines with a single tweet that was interpreted as transphobic and devastated many of her fans. It’s been over a month now, and I still feel coldly betrayed by Rowling.

What, exactly, is to be gained by using your platform to be cruel and exclusionary to one of the world’s most vulnerable populations?

I’m not here to cancel JK Rowling as a person and stoke mob outrage. I’m just here to educate and inform. Trans rights are human rights and trans women are women. Also, white feminism can sometimes intersect with trans exclusion or white supremacy, which is unjust.

Before I get into the actual tweet and why it’s so impactful, let me be clear: Trans people are real. Their validity isn’t a political debate. Their experiences are real. Trans people will always have a place in the Harry Potter fandom as well as the world at large. With that said, I am a cisgender woman, meaning my personal gender identity has always aligned with the sex I was assigned at birth. I have privilege as a cisgender woman, and I’ll never understand the impacts of transphobia. The words and voices of trans people are the most important when tackling this issue. I strongly recommend this New York Times article by Jackson Bird.

One thing I’ve learned from the Harry Potter fandom is how to use my frustration to create something productive. So I wrote a thing about JK Rowling’s tweet. For the New York Times.https://t.co/cO4AuHDVAV

In case you missed it, on December 19, J.K. Rowling took to Twitter to express her support for a former employee of the Center for Global Development named Maya Forstater. Ms. Forstater was in the news for her claims that her former employer discriminated against her after deciding not to renew her contract as a result of Forstater’s transphobic tweets. Forstater’s tweets voiced her opposition for proposed changes to the UK’s Gender Recognition Act which would reform the legal recognition process for trans people to change their gender legally. It’s important to note that trans people in the UK have had the right to legally change their gender since 2004. J.K. Rowling defended Forstater on Twitter, claiming that Forstater was wrongly let go for stating that “sex is real.”

I share the concerns of @fairplaywomen that radically expanding the legal definition of 'women' so that it can include both males and females makes it a meaningless concept, and will undermine women’s rights & protections for vulnerable women & girls.

Dress however you please.
Call yourself whatever you like.
Sleep with any consenting adult who’ll have you.
Live your best life in peace and security.
But force women out of their jobs for stating that sex is real? #IStandWithMaya #ThisIsNotADrill

The claim that “sex is real” is a common argument against the existence of trans people, rooted in the belief that trans men aren’t men and that trans women aren’t women; this idea makes a mockery of trans people and strips them of their experience. Skepticism of the transgender experience is still largely prevalent, yet studies show with increasing evidence that gender identity and sex aren’t one and the same. J.K. Rowling’s tweets express views held by TERFs or trans-exclusionary radical feminists. TERFs often attempt to masquerade transphobia as women’s issues that are specific to cisgender women. Rooted in the belief that trans women are not women at all but men, TERFs argue that trans women should not be included in the social and legal protections awarded to cisgender women, which refers to women who were assigned female at birth. These devaluations of trans people’s existence and experiences are examples of microaggressions, a word that refers to commonplace verbal, behavioral, or environmental shaming that targets a specific group of people. “Micro” is a misleading word. These ideas end up culminating in the dehumanization of trans people, which has led to and continues to lead to lethal violence toward trans people – especially trans women of color.

However, if you’ve been keeping an eye out, you’ll notice this isn’t the first time J.K. Rowling has been called out for her seemingly transphobic beliefs both online and in her books. In June 2019, she was called out for liking transphobic tweets made by a YouTuber, a move that her press team wrote off as a “middle-aged moment” 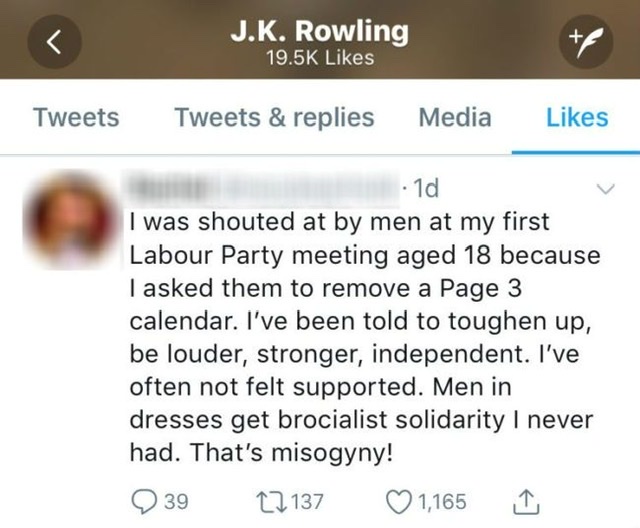 In 2014, Rowling published The Silkworm under her pseudonym Robert Galbraith, which contains an objectifying and offensive depiction of a character who is a trans woman. Journalist Katelyn Burns elaborates in this article for the website, them. The character, Pippa, is described as “unstable and aggressive,” a common stereotype of trans women, and has a “visible Adam’s apple.” The book contains a joke about this villainous character being susceptible to “pre-op” prison rape.

After the morning of December 19, I felt like my work within the Harry Potter fandom was suddenly tainted. Can I simultaneously call myself a Harry Potter fan and an ally for trans people?

Immediately after Rowling‘s tweet was posted, it became clear that Harry Potter fans are doing their absolute best to keep the books sacred. If there is beauty to be found in this dumpster fire of a situation for so many fans, it’s that the fandom was loud in their support for trans Harry Potter fans who are grieving after J.K. Rowling’s comment.

I believed that the Harry Potter books showed examples of allyship that were great tools for teaching children to stand up for what they believe. Now, I am honestly not sure what I believe in. Growing up, Hermione Granger inspired me to fight for the rights of others. There’s no way she would stand for her creator’s words of transphobia, right? The message of the series begins and ends in love. Why, then, would its creator use her platform to spread anything but? Rowling’s singular tweet devastated millions of fans, some of which were so inspired by the Harry Potter books that they felt brave enough to come out as trans.

I grew up as a trans child reading your books as an escape. I would often pick out names from characters to give to myself, before I ever felt comfortable in who I was. This decision, to support people that hate me, and want to do me harm. It brings me to tears… Why. Why?

Remember what Hagrid said after being outed as half-giant: I am what I am, an’ I’m not ashamed. ‘Never be ashamed,’ my ol’ dad used ter say, ‘there’s some who’ll hold it against you, but they’re not worth botherin’ with’

So what can you do as a Harry Potter fan in support of trans people? I’d make a trip over to the Harry Potter Alliance’s website. For years, the HPA has been providing resources to fans who want to make a positive change in their communities. I believe that their approach to activism reflects on the fandom’s intolerance for hatred and recognition of transphobia. Also, consider giving your financial support to trans artists. There are plenty of trans authors writing amazing fantasy series that deserve your readership. Boost the visibility of the trans creators on your social media. Write LGBTQ+ interpretations of the Potter series in your fan fiction and fan art. Use your energy in the fandom to shift the legacy of Potter away from J.K. Rowling’s bigotry, if this is how you feel. Create a Dumbledore’s Army of your own by standing with your trans brothers and sisters.

In light of the recent J K revelation I want to promote my dear friend Maia Kobabe’s zine https://t.co/tPf1O1XmOD
It is a thoughtful deconstruction of reconciling a love of HP when the author is problematic. And all $ from digital sales goes to @NDNrights

I’ll conclude with some words from J.K. Rowling, to J.K. Rowling. I do so with a sense of amazement. How could someone who denies the existence of trans people ever write these words? “You fail to recognize that it matters not what someone is born, but what they grow to be” (GoF 708).