I’ve hosted a lot of Harry Potter-themed parties over the years, but my best by far was the one my mom organized for my ninth birthday. She went all out bringing the magic of the wizarding world to life, and I want to share some of her creativity here to inspire anyone else who’s planning Harry Potter parties for their children (or themselves – I definitely don’t judge).

As the guests arrived, their first stop was a trip to Diagon Alley. We set up our Diagon Alley in the living room, with signs and props for the different shops like Madam Malkin’s and Slug and Jiggers. Our guests approached the stores by first climbing through a tunnel at Gringotts to get their gold plastic coins, which they could use to buy their robes (simple black cloth tied with ribbons), plastic cauldrons, and wands. In order for the wand to choose the wizard, each guest waved their wand to make a marble on the table move (the marble was magnetic, and Ollivander moved a magnet under the table to make it look like the marble was moving on its own). 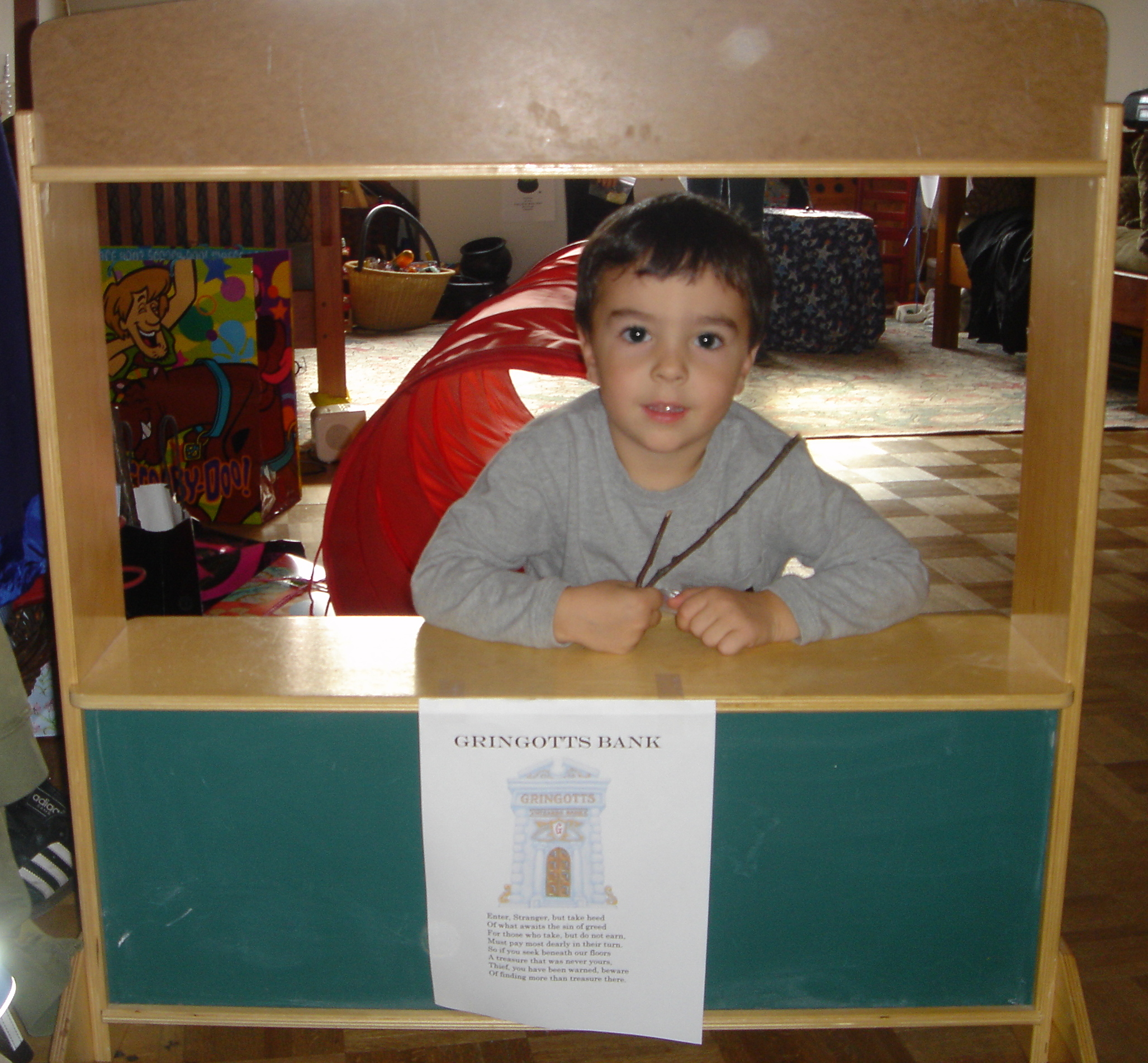 My little brother acting as our Gringotts goblin

Next, we needed to get to Platform 9 and 3/4. To simulate the brick wall in the train station, we drew bricks on a disposable red tablecloth and hung it up in the doorway. We all ran through the bricks to get to Hogwarts on the other side, where the Sorting would take place. 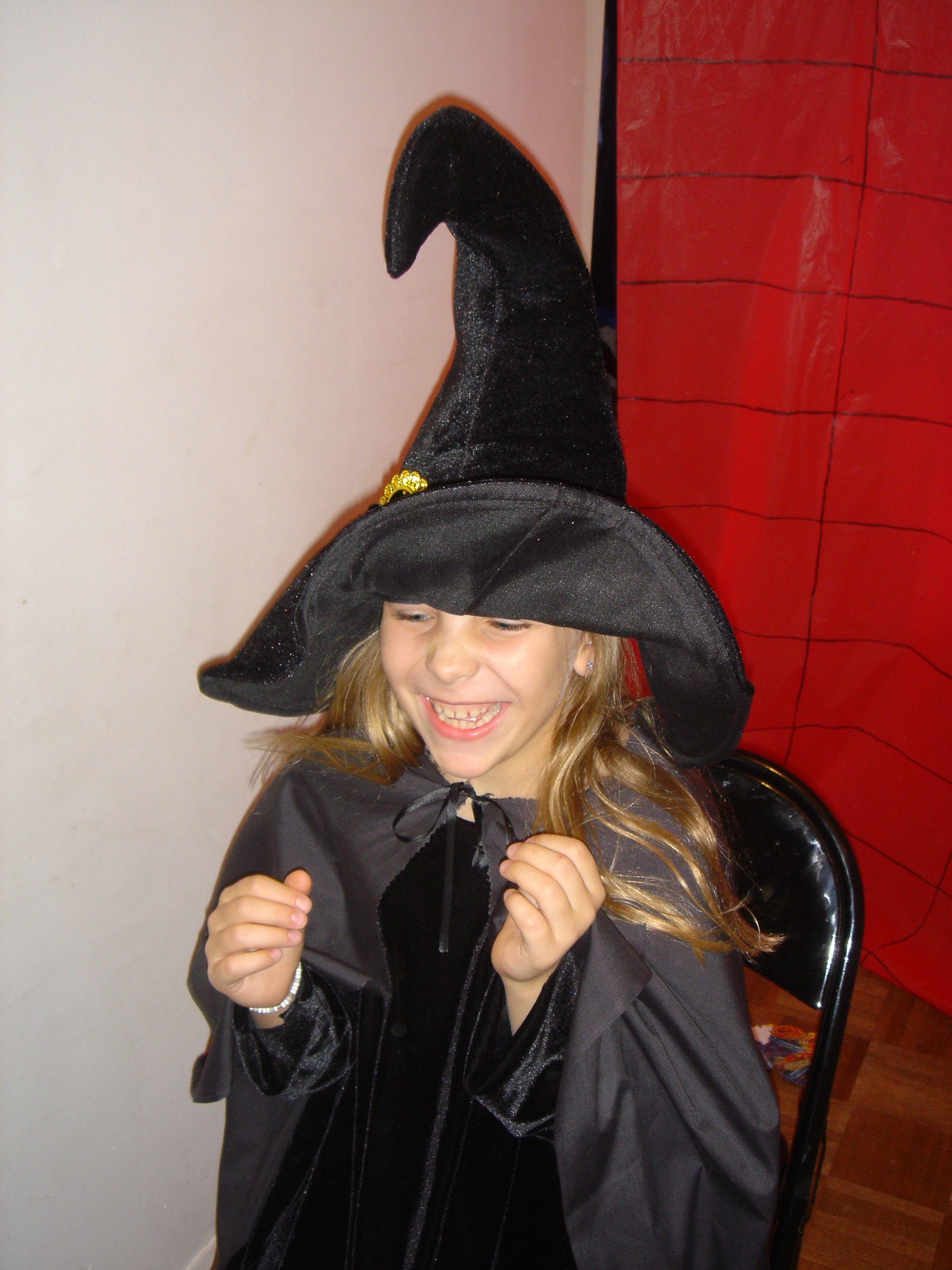 It’s pretty easy to make a magical and realistic Sorting – all you need is a witch’s hat and a cellphone or walkie-talkie. Using some extra felt or cloth, you can pin the walkie-talkie to the inside of the hat, and someone in the other room can speak into their walkie-talkie, pretending to be the Sorting Hat. Everyone was excited to hear the Sorting Hat call out their names and Houses!

We next split up the party guests by House to rotate through their lessons, which included Potions, Charms, and Divination.

For Potions class, we did a variety of easy science experiments. First, we did a color-changing potion, where you take purple cabbage juice and put vinegar in one glass, turning it red, and baking soda in another, which turns it green. We then did the dancing raisins spell, where you watch raisins float and dance in Sprite. Last, we attempted making an egg vanish into a bottle, but this craft worked better in theory than in practice.

For Charms class, we made a simple invisible ink and used it to write secret messages with our quill pens. Our most magical moment was learning the Lumos incantation. For this trick, we attached a long power cord to our living room lamp and threaded the cord underneath the rug to a hidden corner of the room. An accomplice stood in the corner and flicked the switch on and off with their foot as each guest performed the spell. Everyone loved this one, and nobody could figure out how it worked! 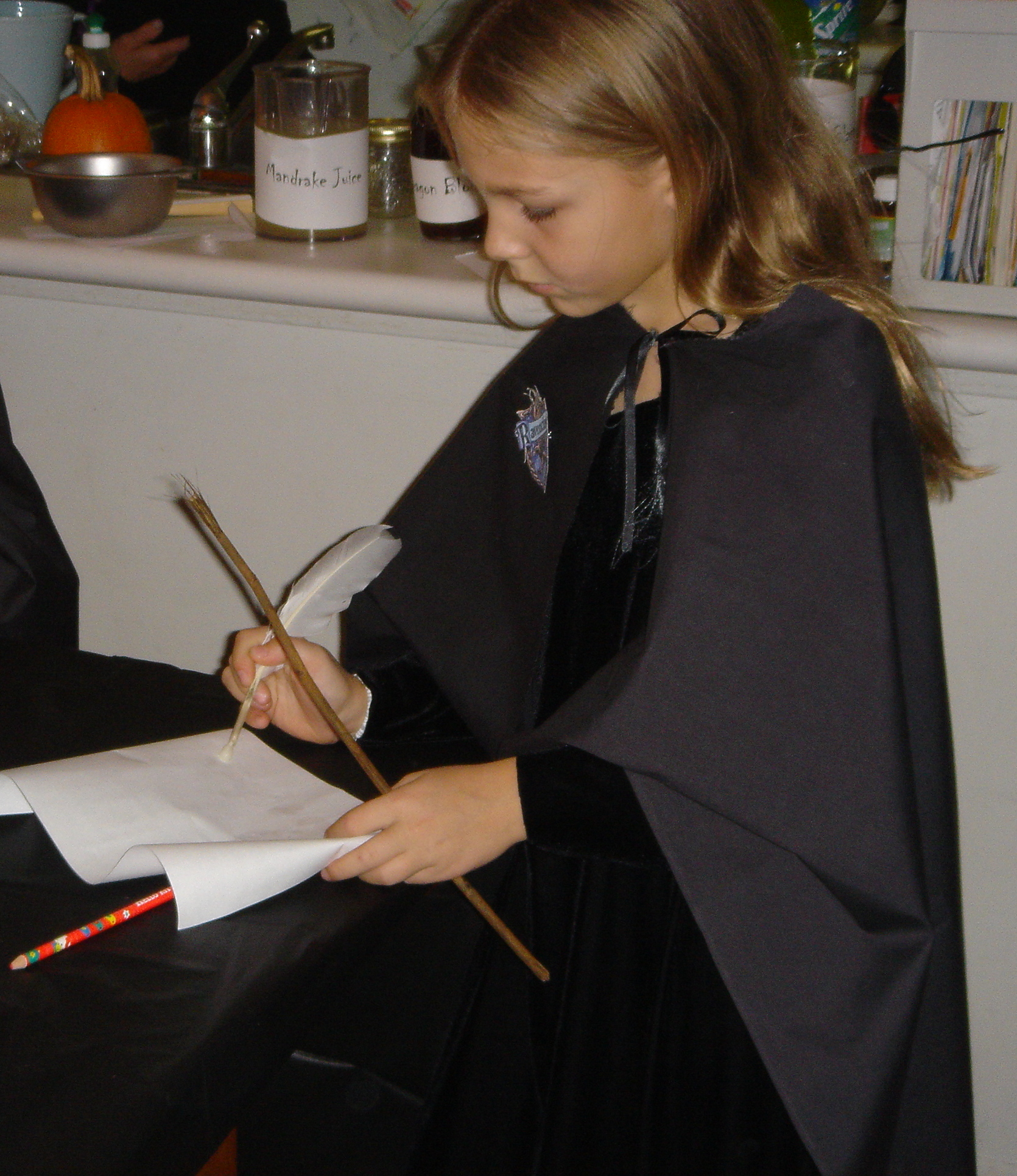 For Divination class, my sister dressed up as Professor Trelawney and read palms, gave fake predictions using a crystal ball, and consulted her numerology charts.

Next, we went outside to play an exhilarating game of Muggle quidditch. These were the days before Muggle quidditch was an official game, but our version was pretty similar. Instead of using a person as a Snitch, we hid a small ball for the Seekers to find. Everyone had a lot of fun running around and throwing dodgeballs at each other!

Last, but not least, no Harry Potter party is complete without a Hogwarts-style feast. Chicken legs are, of course, a must-have, and we labeled the Fritos “Trolls’ Toenails,” and Bugles “Unicorn Horns.” Cream soda is an easy Butterbeer substitute. If you’re a serious cook, The Unofficial Harry Potter Cookbook has great recipes for any Harry Potter occasion. If you’re not into baking, check out my article on miniature no-bake Harry Potter desserts, which are a cute and easy crowd-pleaser. 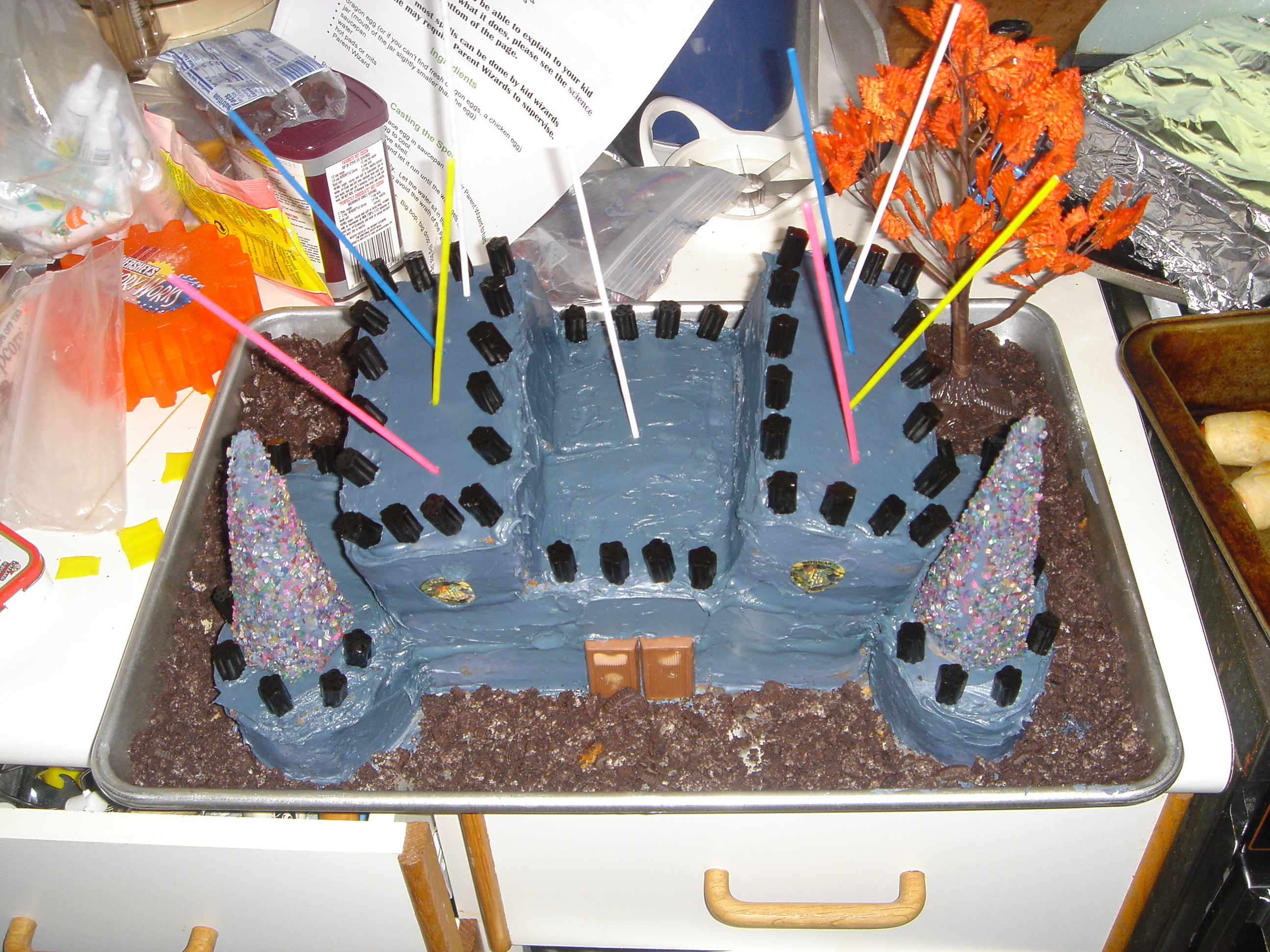 There are lots of Harry Potter cake ideas out there, but we decided to make a Hogwarts castle. This design is pretty simple since it mainly involves cutting and rearranging the cake to create the layers you see above. No fondant necessary –  just use ice cream cones for the towers! It’s hard to see from the picture, but we stuck a blue toy car in the fake tree to pretend to be the Ford Anglia.

There’s nothing more exciting and memorable than bringing a group of Harry Potter fans together to celebrate the magical world, and I hope you are now ready to go out and throw your own Harry Potter party! If you have other party ideas, please share in the comments below!