The 2020 American International Toy Fair wrapped up February 25 in New York, New York, and as per usual, a few companies took advantage of the opportunity to unveil some brand-new Wizarding World merchandise! From an extra-special Funko Pop! to an awesome line of blind boxes, you’re sure to find something you can’t live without. Items that haven’t already gone on sale since the fair are available for preorder, so Accio credit cards!

The Funko booth is always a major attraction at any toy fair or comic convention, and while the company announced the majority of the new additions to its Pop! collection at the London Toy Fair in January, it saved one major reveal for New York: Harry Potter is on his way as an 18″ vinyl figure! 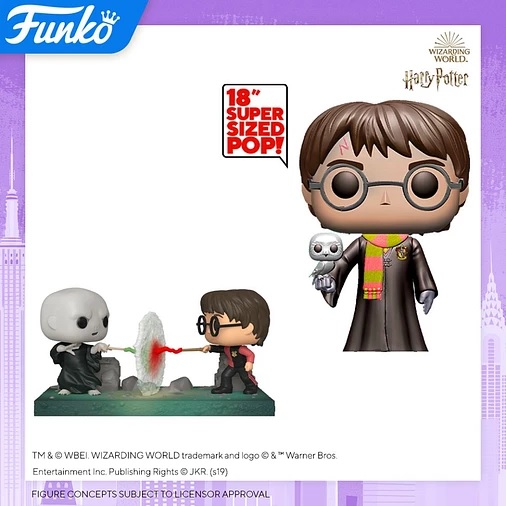 Previously, only a pair of Batman figures have been released in the 18″ size, meaning Harry will be in rare, dark, and brooding company. His figure is clad in Gryffindor robes with a House scarf around his neck and a tiny Hedwig perched on his hand. The large vinyls don't come cheap; Harry will be retailing for $99.99 when he's released July 1. You can preorder the figure now on Amazon. The Funko Pop! Moment: Harry Potter - Harry VS Voldemort collectible in the lower portion of the above photo was a London Toy Fair reveal and is also available for preorder with a May 10 release date.

It was an embarrassment of Wizarding World riches at the Enesco booth. The company is releasing a wide variety of Harry Potter-themed items, from statues to mugs and more. Two of those previewed at the New York fair have now been released: the Harry Potter Decorative Goblet, with one for each Hogwarts House, and the Harry Potter Albus Dumbledore with Fawkes Statue. Your House goblet will look perfect in your hand while you're banishing unruly dinner guests to the dungeons - or you can just drink your Ovaltine out of it while watching a Potter marathon on SyFy. You do you. Dumbledore, meanwhile, is majestic in his violet robes and traveling cloak as Fawkes comes in for a landing on his arm. 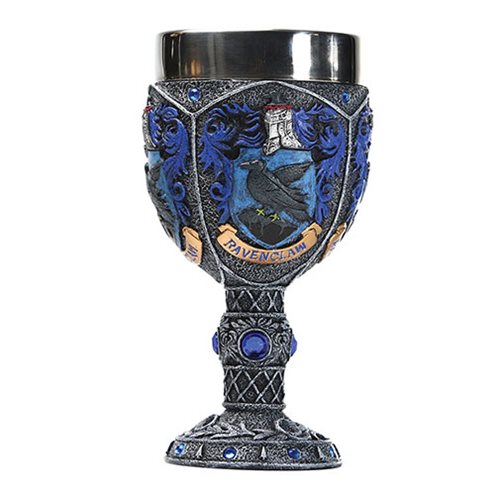 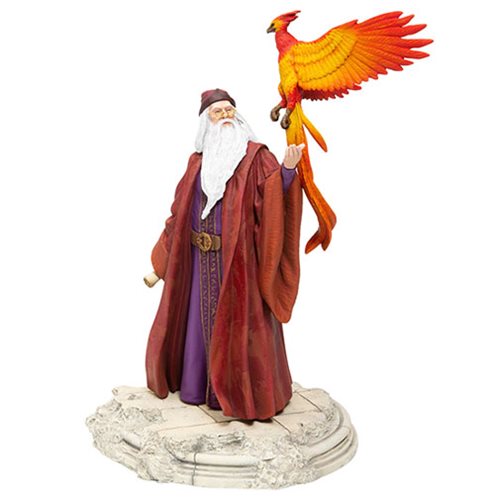 Five more statues are on their way. The Harry Potter Professor Severus Snape Statue, featuring Snape looking personally affronted alongside a portion of table holding a cauldron and a candle, is expected for release this month, as is the Harry Potter Professor McGonagall Statue, depicting our favorite Transfiguration professor in her gorgeous green robes. She's holding the Sorting Hat as she prepares to call a new student's name from her list during the Sorting Ceremony. Set for an August release are the Wizarding World of Harry Potter Hagrid and Norberta Statue, featuring Hagrid looking adoringly at his newly hatched dragon (which, at that time, was still named Norbert), and the Wizarding World of Harry Potter Harry and Draco Quidditch Year Two Statues. Harry's statue depicts the boy wizard flying through the frame of a spectator tower as he attempts to escape the rogue Bludger from Harry Potter and the Chamber of Secrets. Draco's statue is also listed as portraying his second year of Quidditch, but we're a bit confused there, since it looks more like he's absconding with Neville Longbottom's Remembrall, which, of course, happened during his first year. Either way, he looks cool! 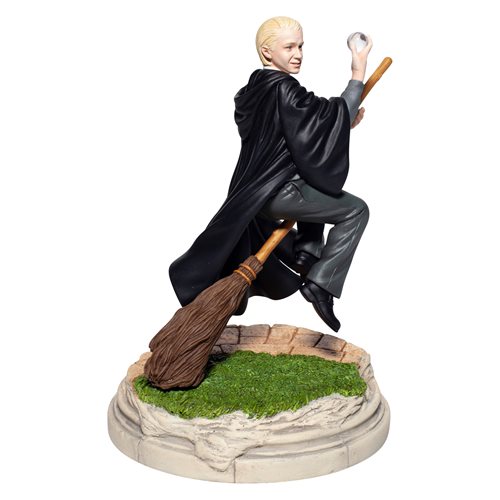 Draco Malfoy is apparently still gloating over absconding with Neville Longbottom’s Remembrall in this statue from Enesco. 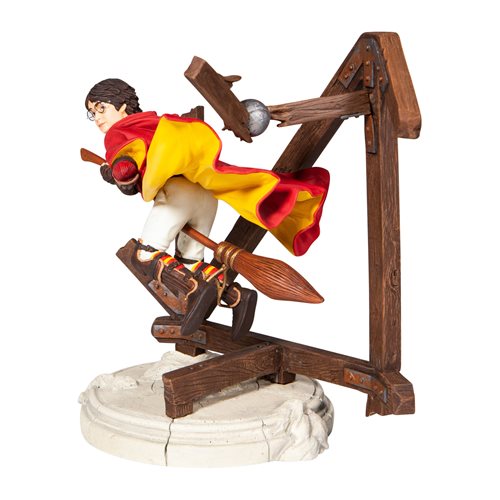 Harry Potter can now be perpetually plagued by the rogue Bludger on your mantel, thanks to this statue by Enesco. 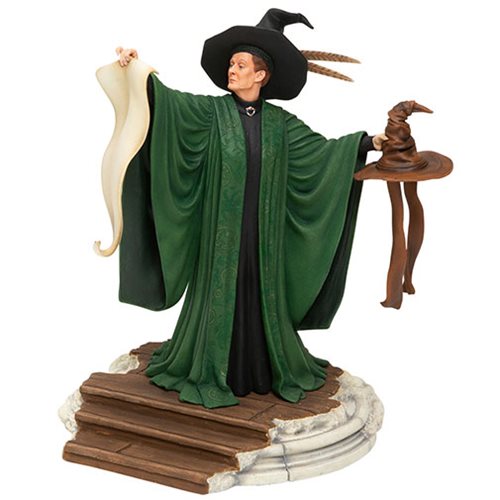 Professor Minerva McGonagall stands ready to give the next Hogwarts first year an anxiety attack during the Sorting Ceremony in this statue by Enesco. 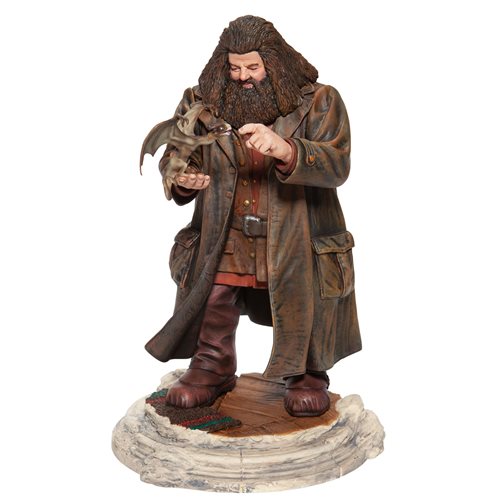 Rubeus Hagrid looks lovingly at Norbert as the dragon prepares to chomp down on his finger in this statue from Enesco. 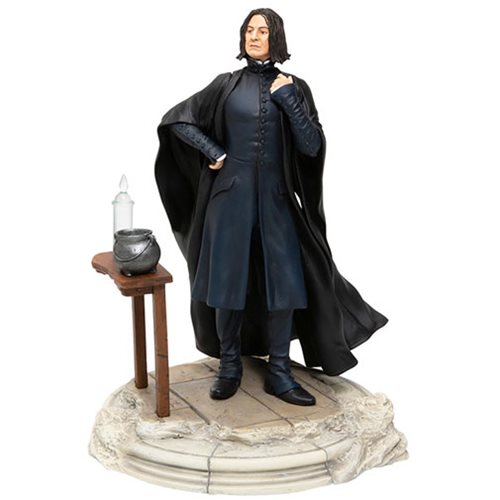 Professor Severus Snape is, as usual, offended by your existence in this statue from Enesco. 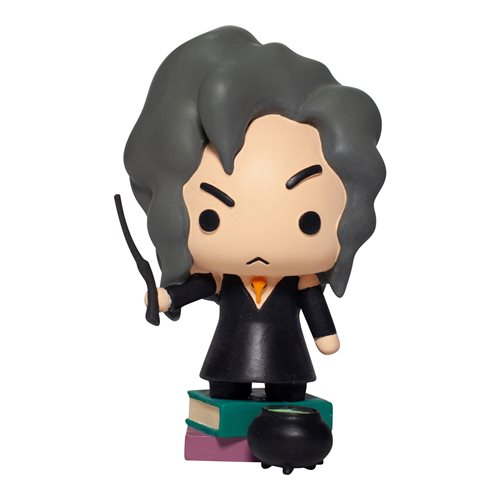 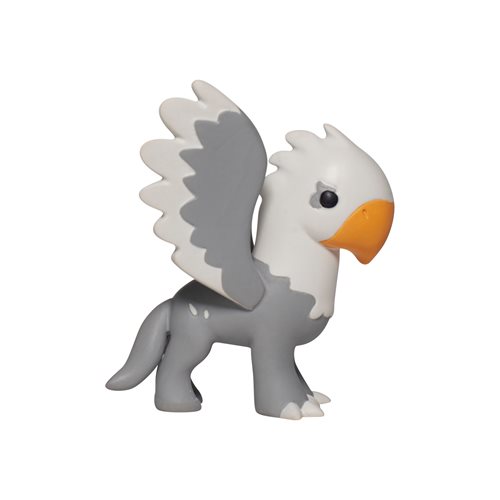 Make sure you bow before picking up this Enesco Buckbeak Charms Style Statue. 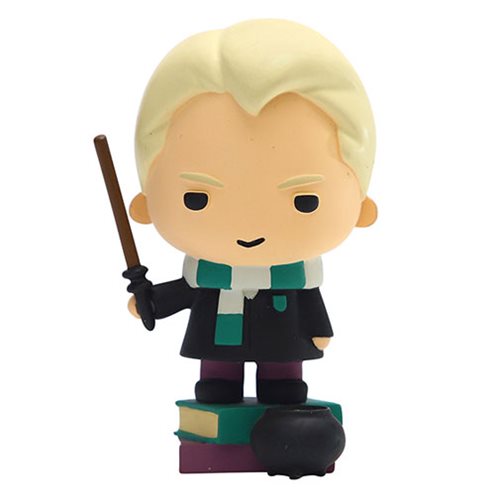 Draco Malfoy looks ready to go tell his father about something in this Enesco Charms Style Statue. 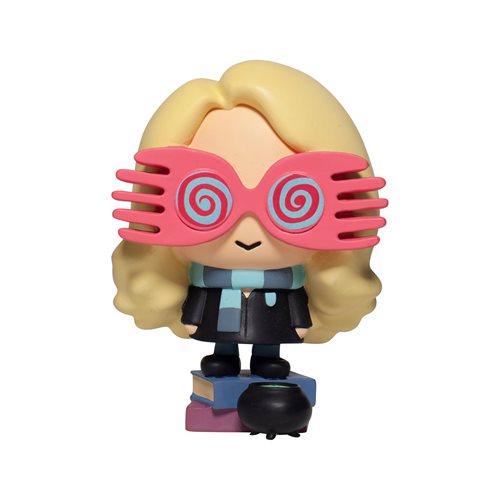 Luna Lovegood’s Spectrespecs are larger than her head to adorable effect in this Enesco Charms Style Statue. 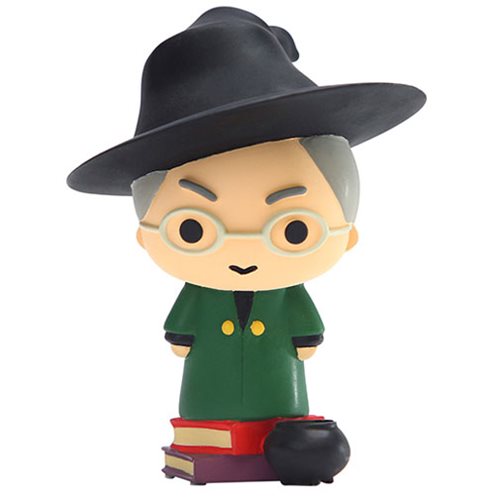 Enesco’s Minerva McGonagall Charms Style Statue wants to see you in her office immediately, but don’t worry – there will be biscuits. 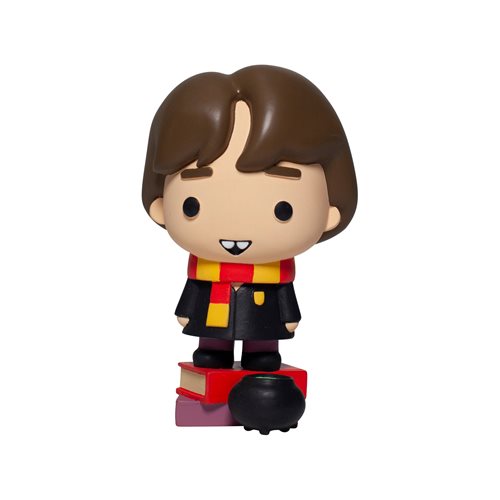 There isn’t a Neville Longbottom figurine in existence that doesn’t have a very cute dental issue, and this Enesco Charms Style Statue is no exception. 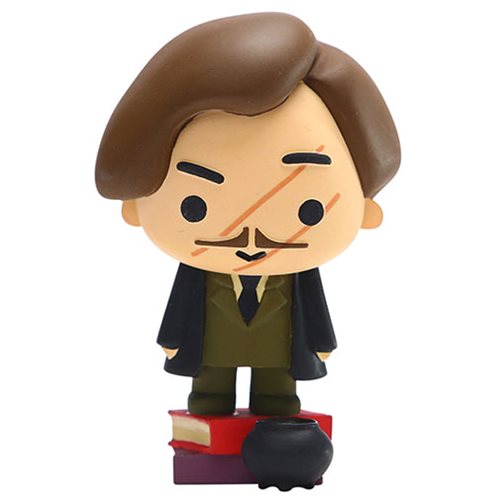 You’ll want to pick up this Enesco Remus Lupin Charms Style Statue just to tell it you love it and that you’re sorry it’s had such a hard life. 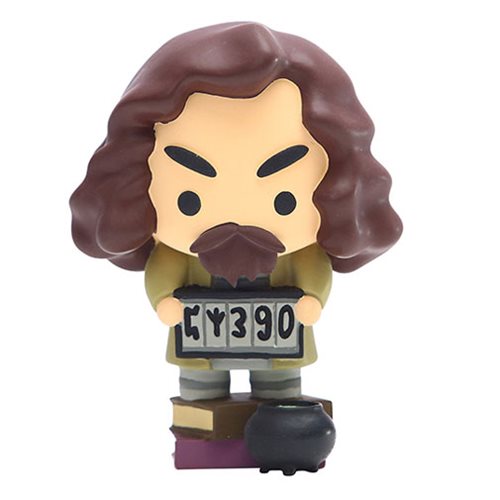 This Enesco Sirius Black Charms Style Statue has done its waiting… 12 years of it… in Azkaban. 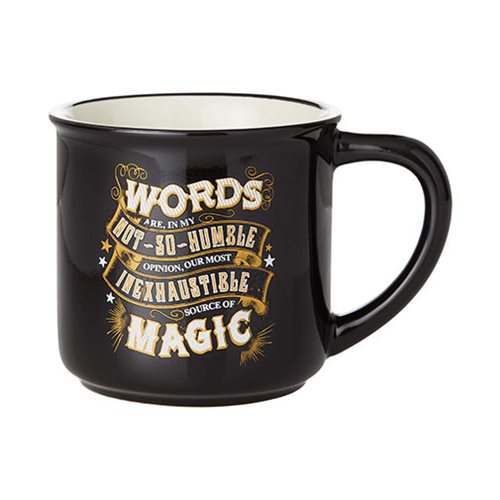 We agree with this Enesco Black Magic Mug (and Dumbledore) that words are magical, but we still won’t speak them until after our coffee. 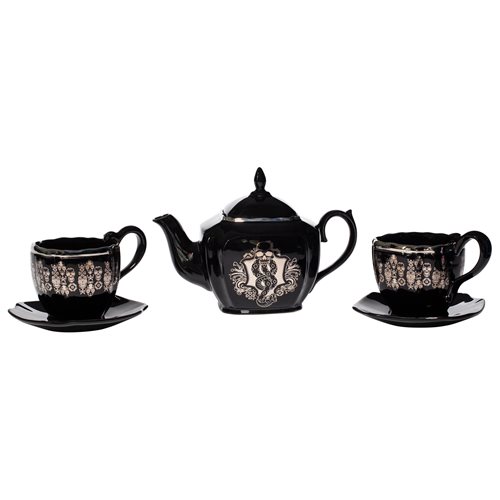 Invite all your evil cronies over for tea and crumpets with this Enesco Dark Arts Tea Set! 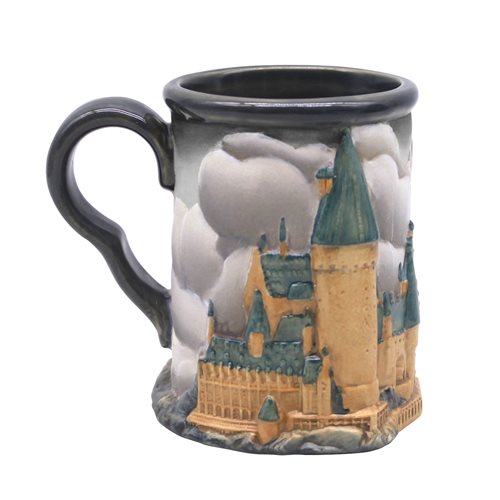 It’s a cloudy day with a chance of Dementors at Hogwarts, but you’ll be ready to tackle anything after a coffee in this Hogwarts Castle Mug from Enesco. 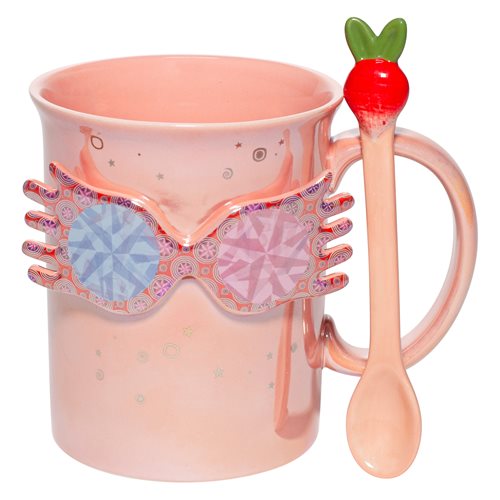 You’ll be able to dream the dreamiest of dreams after a cup of chamomile in your Enesco Luna Lovegood Mug with radish-topped spoon. 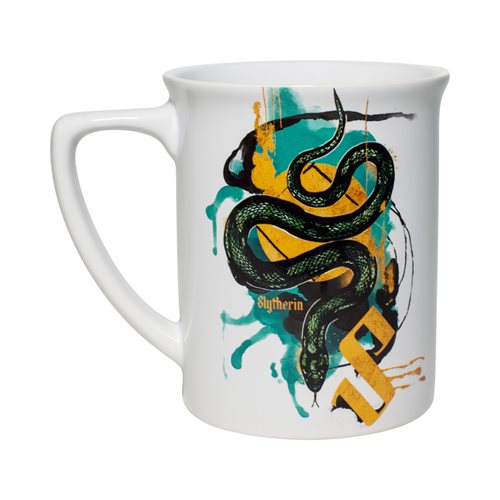 Slytherin to the breakfast table and have a cuppa in this Enesco Slytherin mug, also available in the three other House styles. 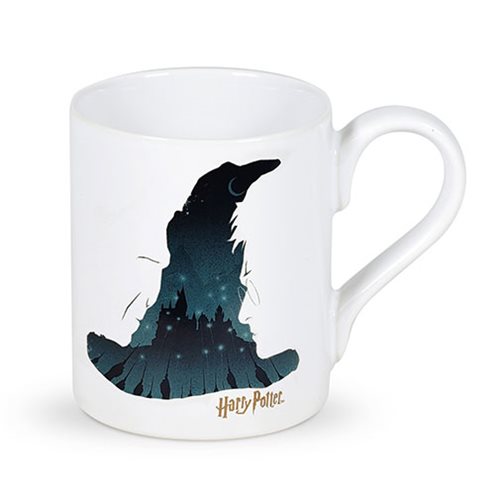 The ultimate battle of good versus evil is approaching on this Enesco Sorting Hat Mug, and you’ll be there to fight just as soon as you’ve had some caffeine. 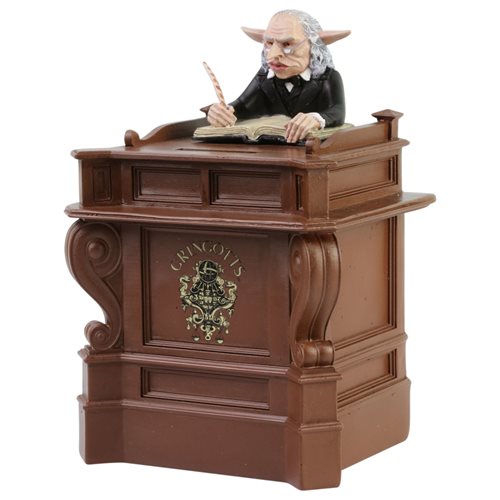 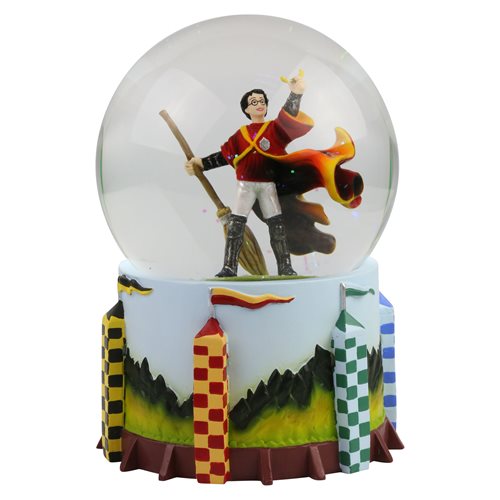 We're suckers for a good blind box, and YuMe Toys has upped the ante with its toy fair reveal: Harry Potter Magical Capsules. 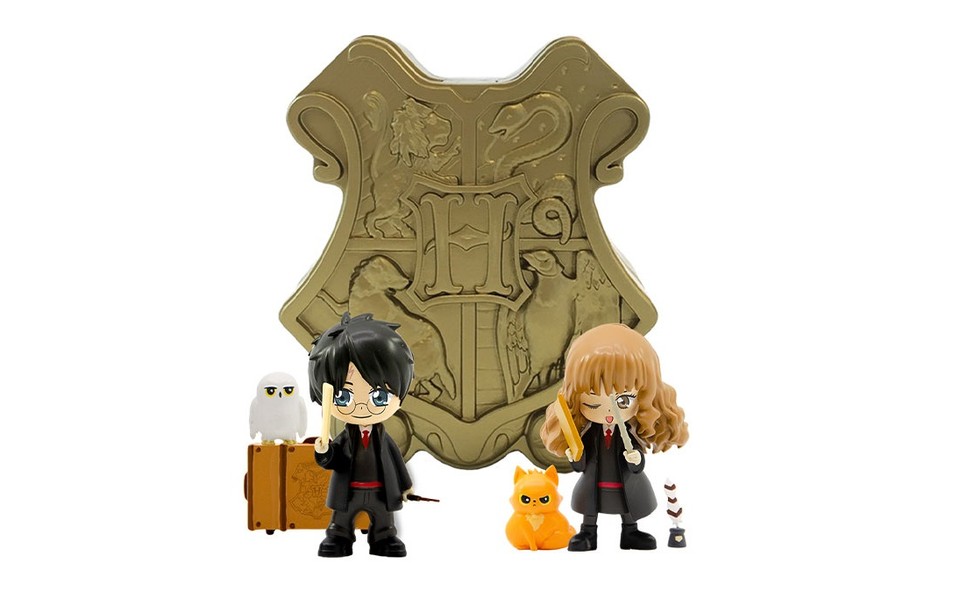 License Global reported prior to the start of the fair that YuMe had partnered with Warner Bros. Consumer Products to launch Series 1 of the collectible range, and Michael Kwan, CEO of Maxx Marketing, YuMe's parent company, said he couldn't wait to get the items on store shelves.

We are tremendously excited to extend the sense of awe and wonder that the 'Harry Potter' films are famous for, to all fans of collecting, unboxing and the Wizarding World. We can't wait to get Magical Capsules on shelves this year.

The capsules come in the shape of the Hogwarts crest. They're full of nooks and crannies, each containing a trinket of some sort, and at the center of the capsule is a character from the Potter universe. The items are expected to go on sale this month, and you can preorder them from Entertainment Earth. You can also view a commercial for the new product on Vimeo.

Eaglemoss Publications already has a whole host of figures featuring characters from Harry Potter and Fantastic Beasts available, which you can purchase individually or through a Wizarding World Figurine Collection subscription. The company unveiled its latest figure in New York: the ever-popular Niffler! Entertainment Earth has the mischievous creature - surrounded, as usual, by gold - available for preorder. 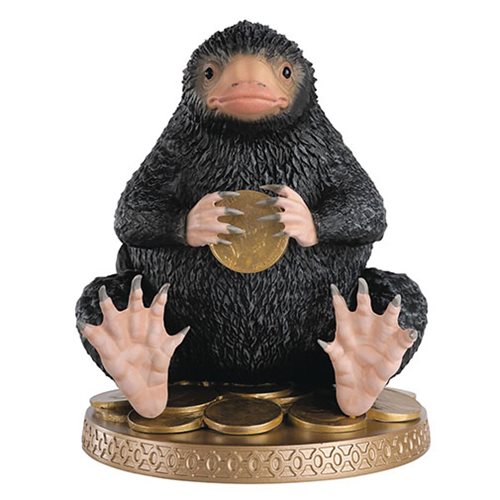