Your favorite Harry Potter characters are ready for battle in these action figures from McFarlane Toys, which is home to a range of collectibles, such as figures from Game of Thrones, Fortnite, and Stranger Things. Our journalist Aly Kirk was able to review a few in this collection, with their wands at the ready to cast a Patronus. Check out what she thinks!

Recently, I received five Harry Potter action figures from McFarlane Toys for an opportunity to review them. The character figures I got were Buckbeak, Harry Potter, Ron Weasley, Hermione Granger, and Lord Voldemort with Nagini.

Let’s start at the top and work our way through each figure and why I loved each and every one of them! 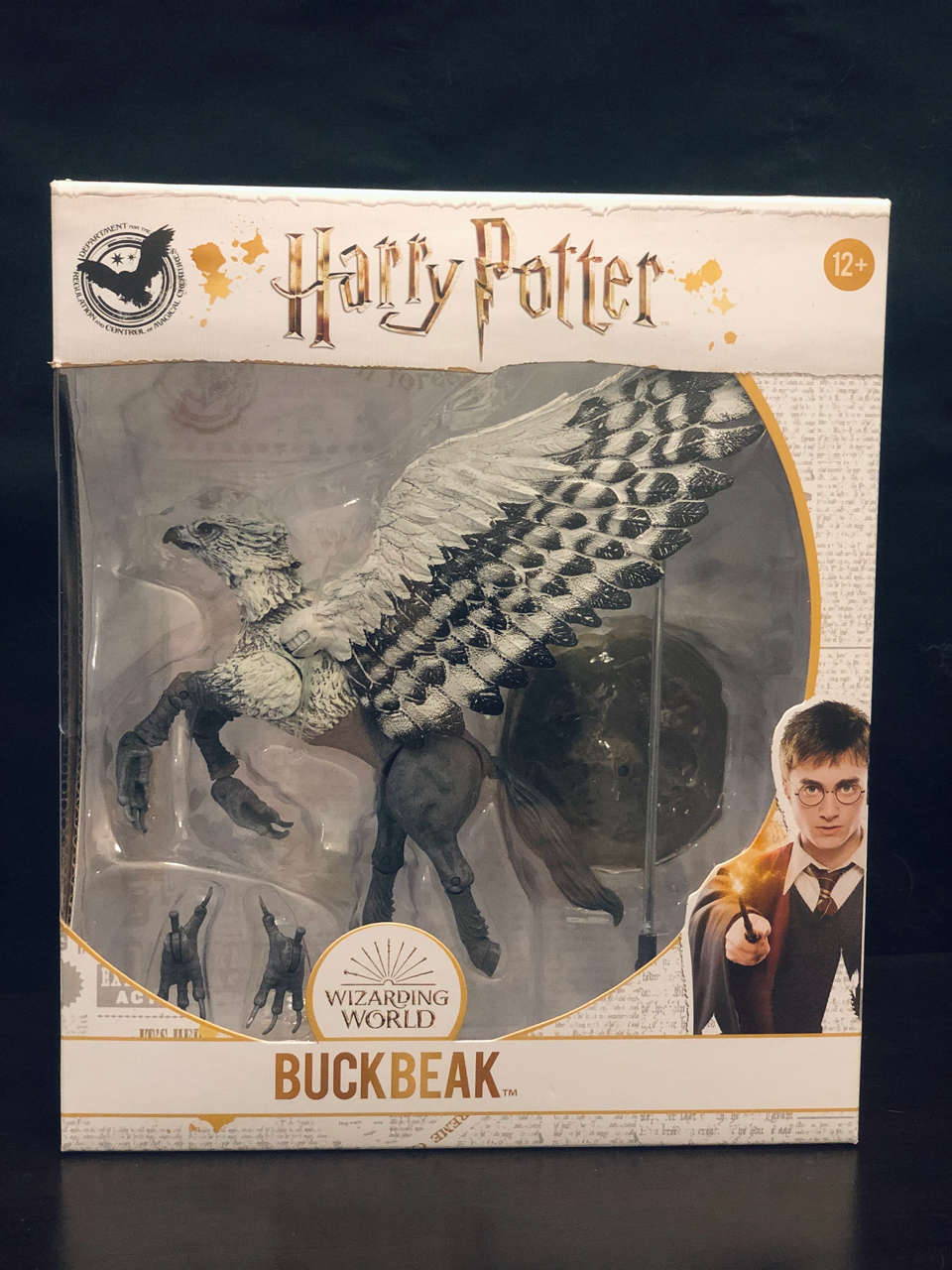 Buckbeak figure in the box

The first of the five I looked at was Buckbeak. The half-horse, half-eagle creature was first introduced to us in Harry Potter and the Prisoner of Azkaban. Buckbeak is beautiful! At first look, the amount of detail in Buckbeak’s body, head, and wings is very intricate and painted with careful attention. It appears that the wings and body complement each other well. Even though the wings are long and spread to look like the creature is flying, there isn’t any excessive heaviness. Each major joint is completely movable and poseable, which also means that Buckbeak’s wings can move up and down.

One of the things I love about certain action figures is the separate pieces that come in the packaging to make the experience more fun. Buckbeak comes with two replaceable front feet so you can use opened or closed front talons. The stand this figure comes with is tall – about five or six inches. The height you get with the stand lets you pose Buckbeak in flight, and the stand itself draws little attention away from the finished product. 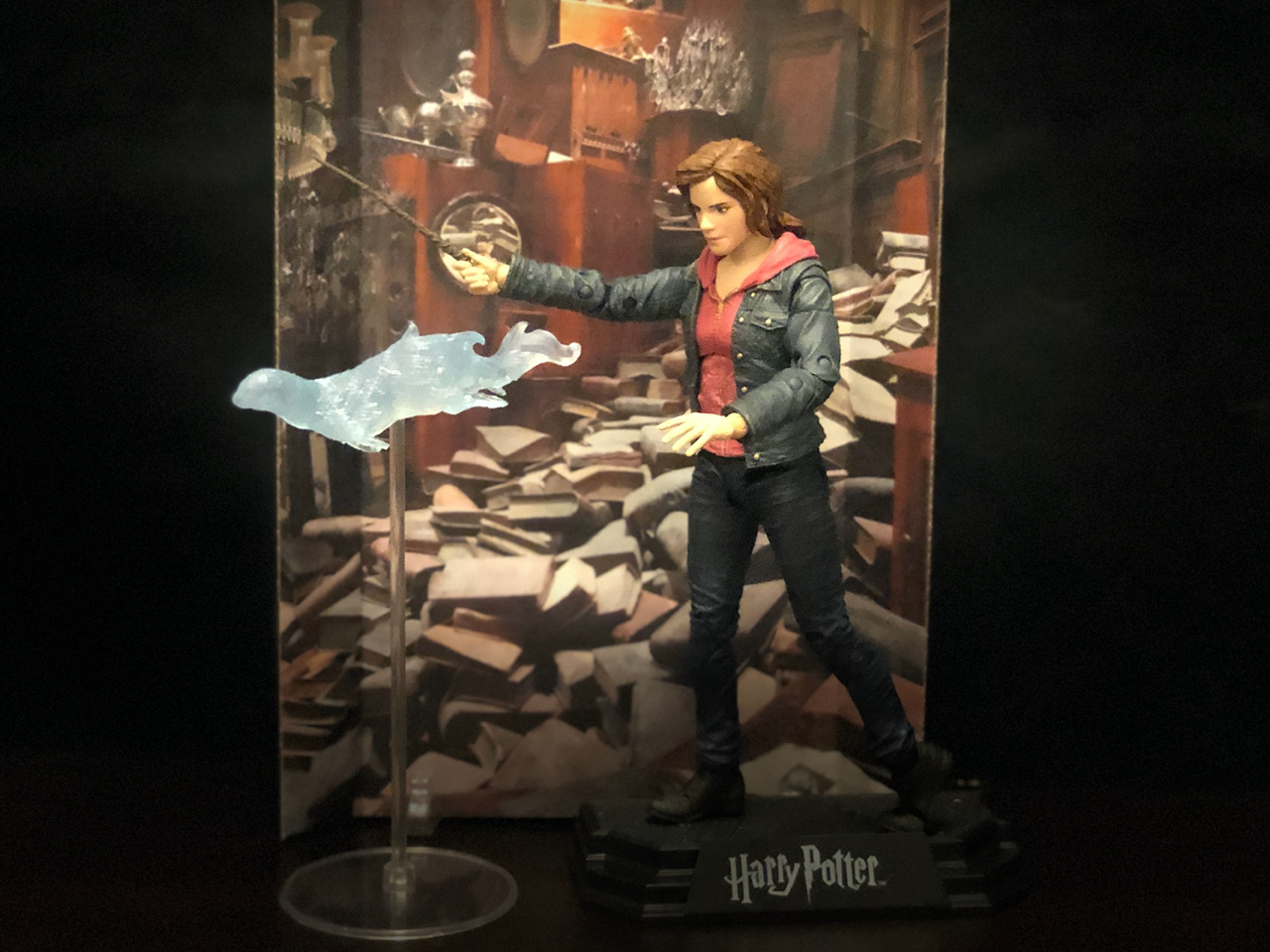 Hermione Granger out of the box 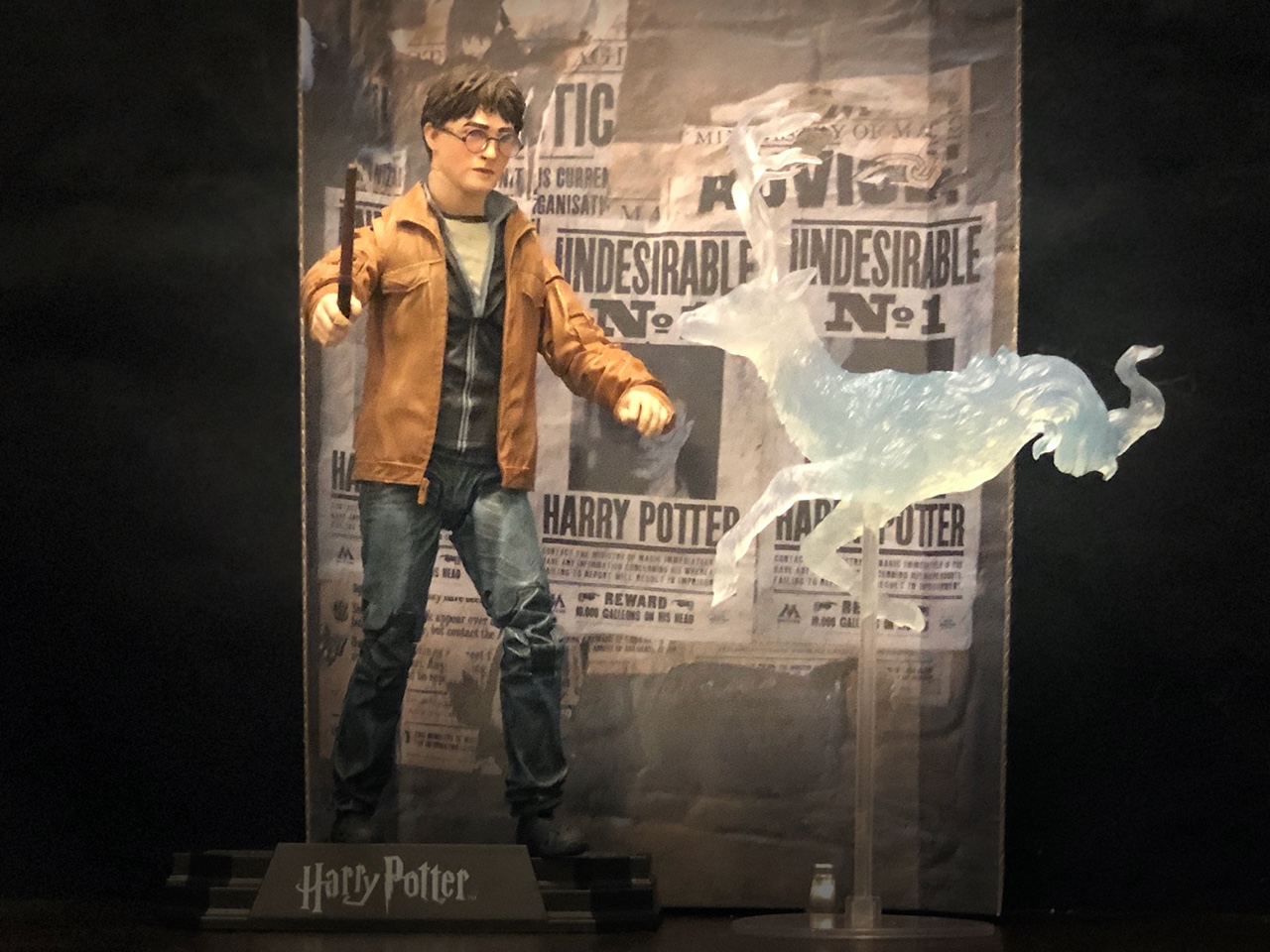 Harry Potter out of the box 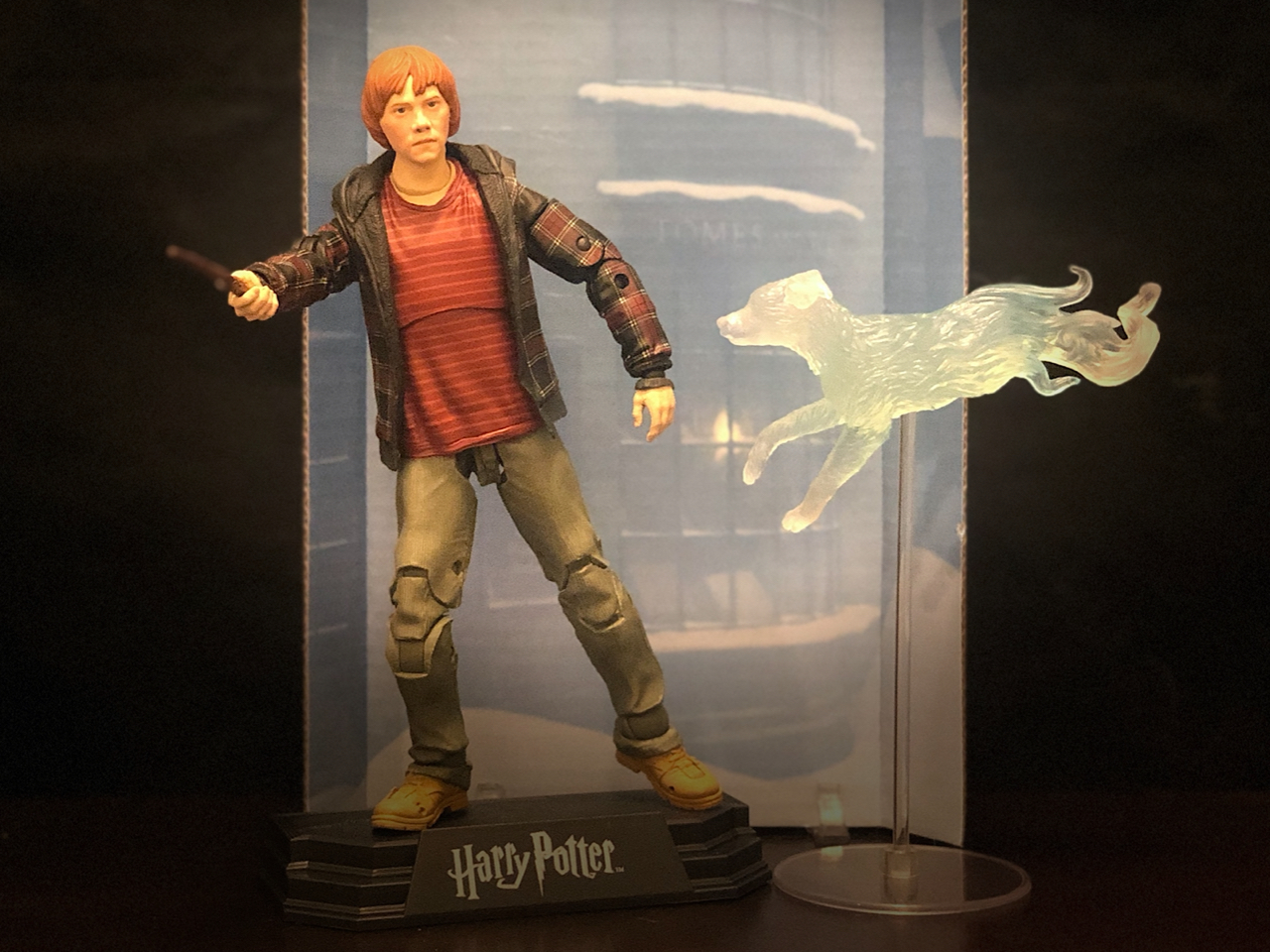 Ron Weasley out of the box

The next three figurines are Harry, Ron, and Hermione. All three are dressed as they were when we last saw the trio at the Battle of Hogwarts. Similar to Buckbeak, all of the major joints on the figures’ bodies are movable, making it really simple to position the characters. When I opened the boxes, I’ll admit I had a little fun and set the characters up so they looked ready for battle, wands and all. The faces on the figurines closely resemble the characters in the movies, which I have to admire.

Each character comes with a wand and a model of their Patronus. Harry’s Patronus is, of course, a stag. Hermione comes with an otter, and Ron comes with a dog. The translucent blue creatures that are provided in the boxes are really pretty! Each one looks like it is really running on air, especially when it is set up on the stand that is provided in the box. If you’re feeling creative, Harry, Ron, or Hermione can all be set up to look like they are casting a Patronus Charm. One detail I enjoy with the Patronuses is that their back halves aren’t fully formed and look almost ghostly, as though they are coming straight from their owners’ wands. It’s just like magic! 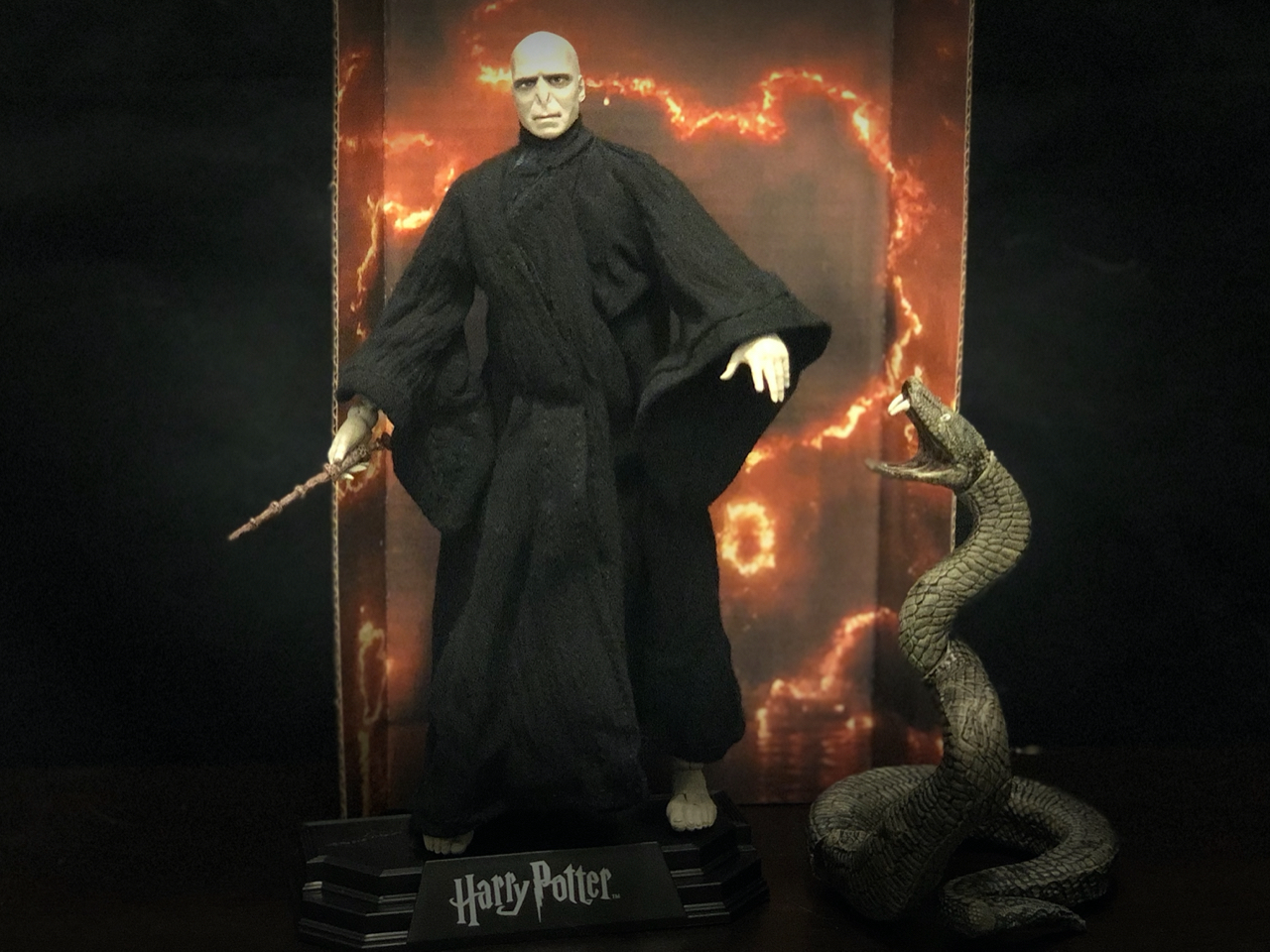 Lord Voldemort and Nagini out of the box

The last statuette I received was of Lord Voldemort. I really liked this one in particular. The clothes on the figure are all cloth, unlike on the other three characters. This gives the character figure a little something extra and lets Voldemort look particularly villainous. Voldemort’s wand, the Elder Wand, is included in the box.

Instead of a Patronus coming with Lord Voldemort (does he even have one?), there is a model of Nagini. The snake stands up very well for itself despite the fact that it looks quite top-heavy. Since snakes don’t have singular, major joints, Nagini’s figurine can move in a few different spots, which allows the snake to stand in strike position or lie flat. The detail on the surface of Nagini is beautiful. It’s very textured for a model and resembles quality snakeskin.

Of all five models, I have to say my favorites are tied between Buckbeak and Lord Voldemort with Nagini, simply for the detail and attention put into creating such lifelike replicas. I do, however, find the Harry, Ron, and Hermione models to follow closely behind. The only slight downside I find in these figures is the fact that they are a little top-heavy. This gave me a little difficulty in positioning them all on their stands. But with a little effort, I was able to stand all five up in several positions. 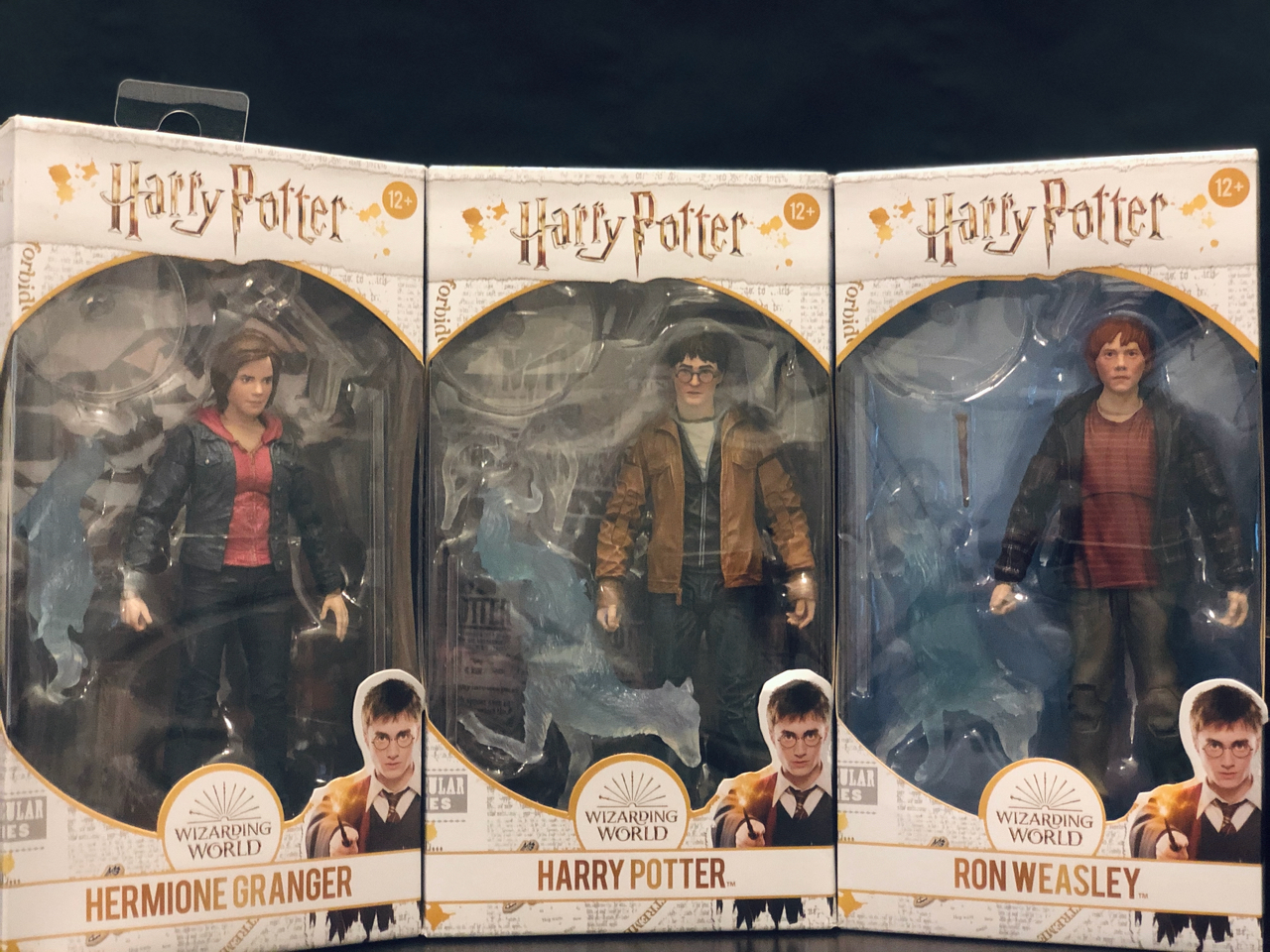 The golden trio in boxes 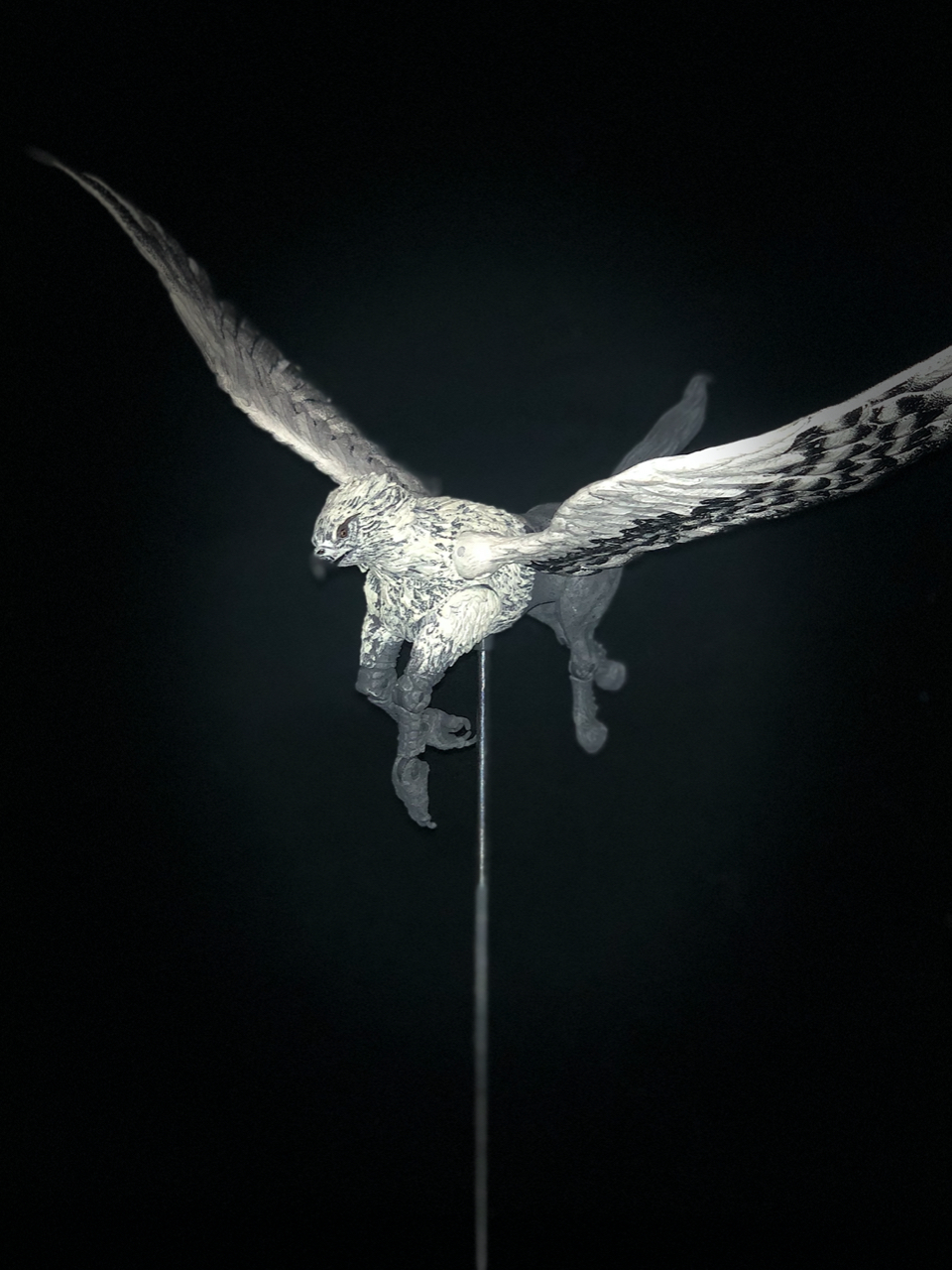 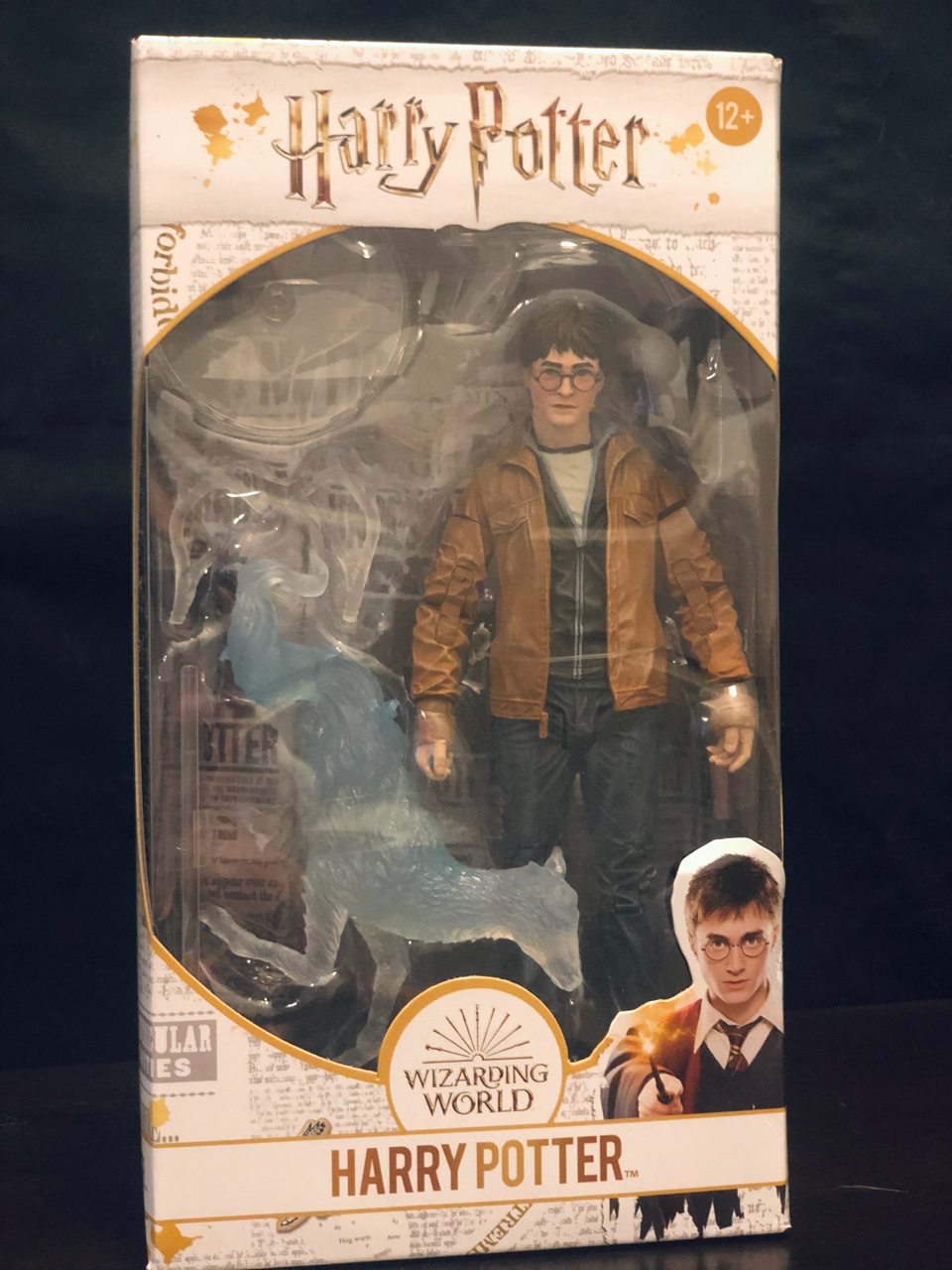 Harry Potter in the box 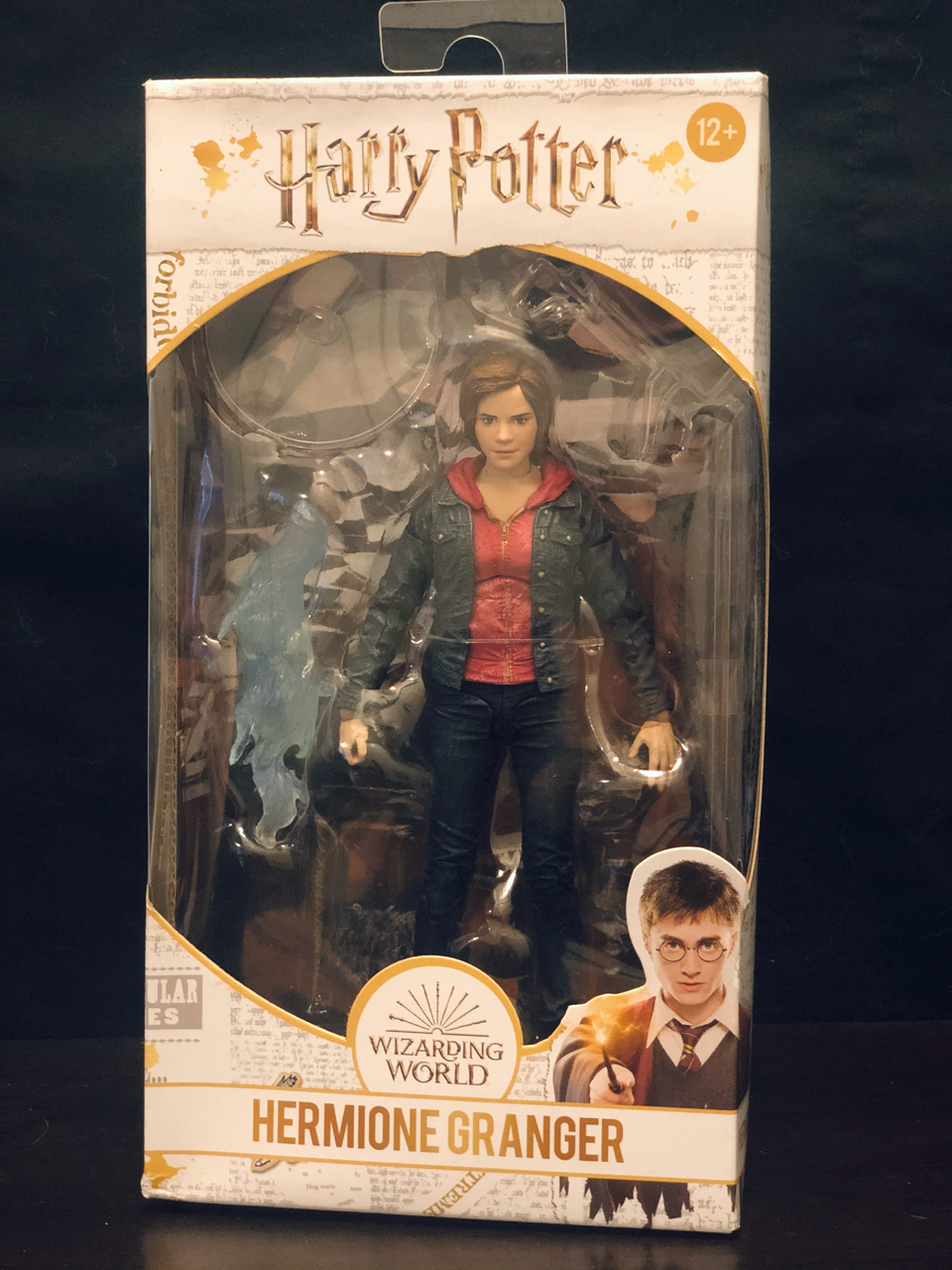 Hermione Granger in the box 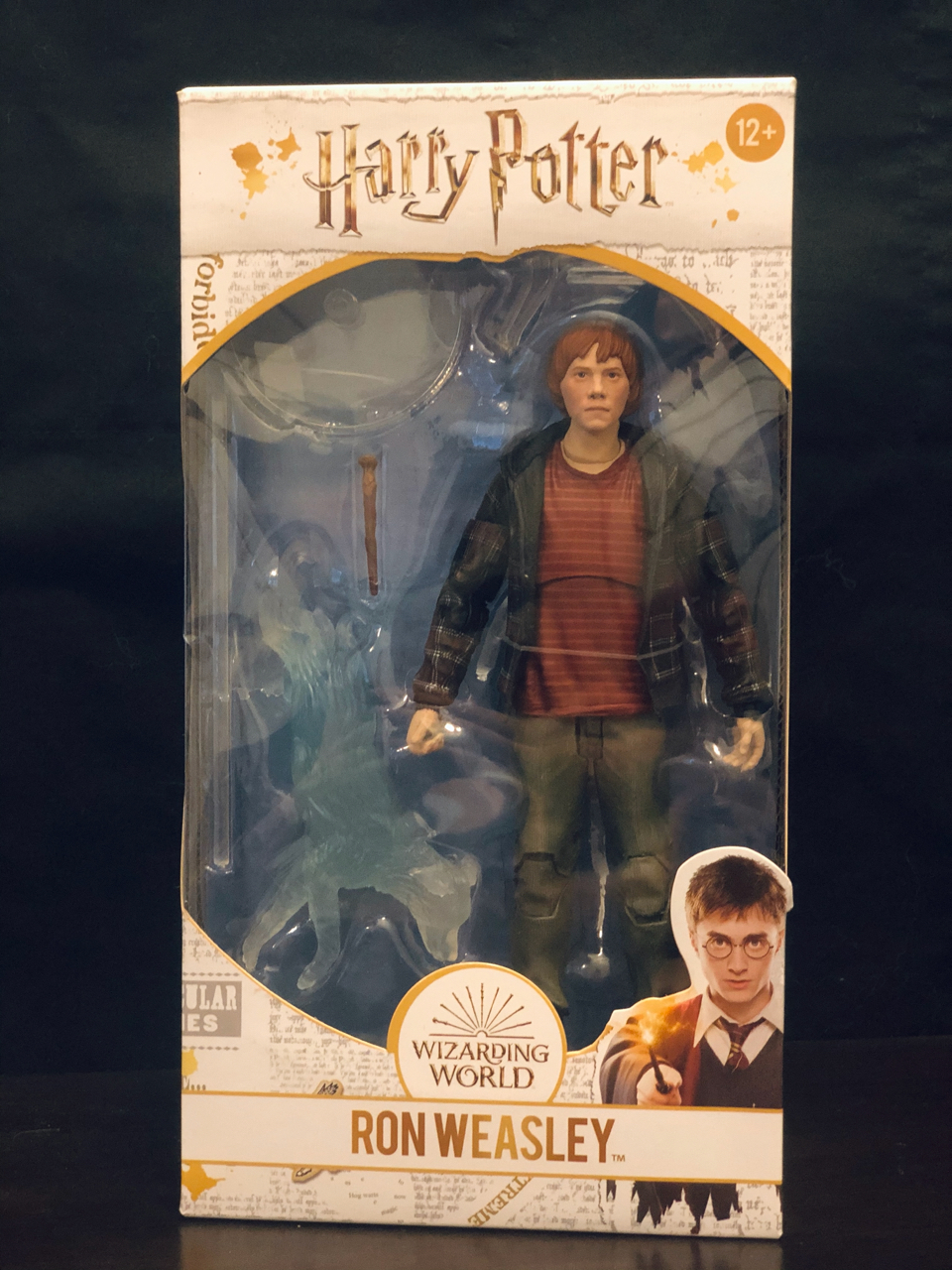 Ron Weasley in the box 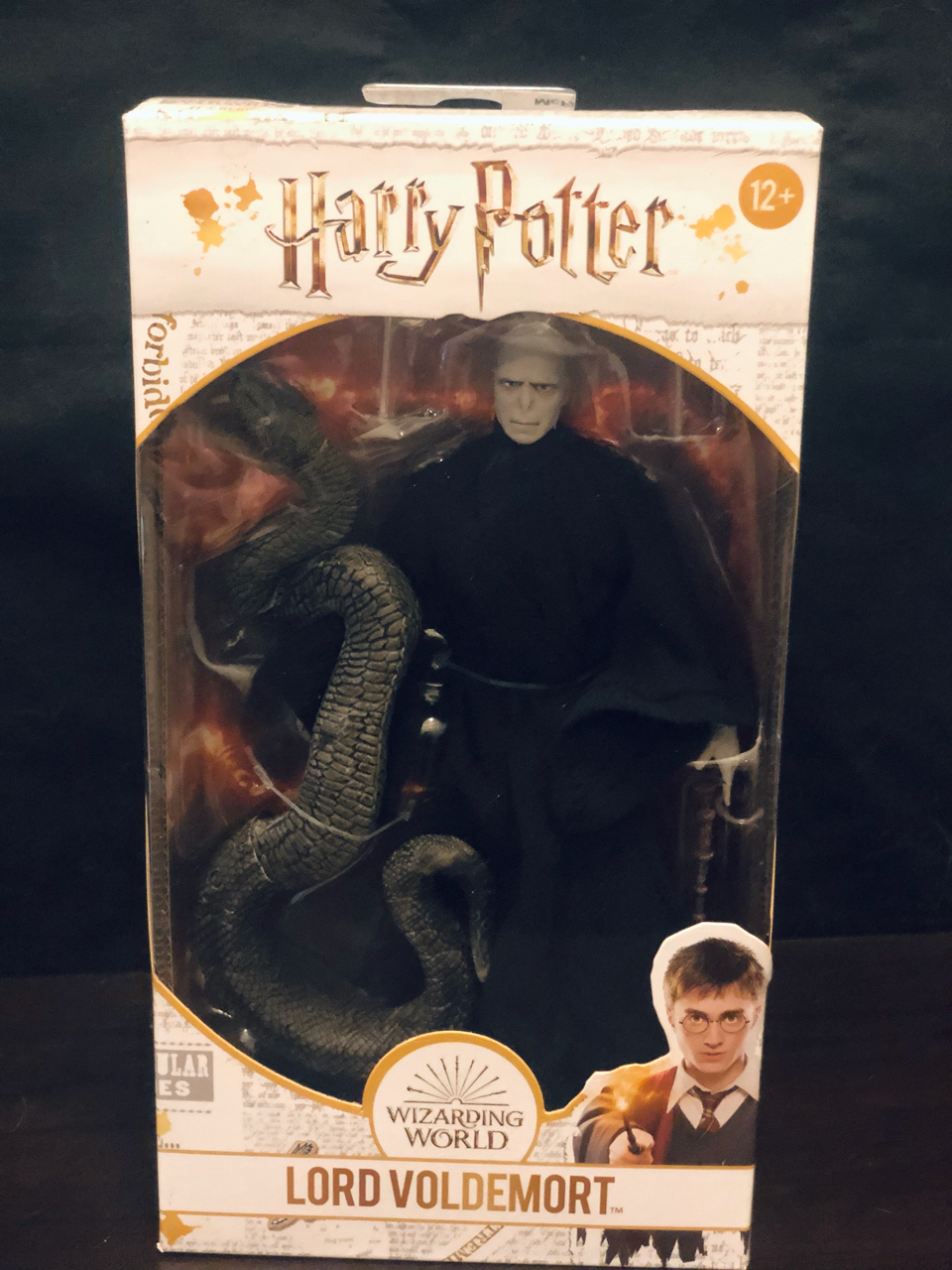 Lord Voldemort with Nagini in the box

McFarlane Toys has done it again! If you’re looking for a unique gift for that Harry Potter enthusiast in your life, these are perfect. All five of these figurines are available for purchase on McFarlane.com.

Five Harry Potter action figures were provided by McFarlane Toys. All opinions belong to the reviewer.