We all remember those iconic YouTube videos of Harry and the gang and probably couldn’t get “The Mysterious Ticking Noise” out of our heads for days. But have you ever wished you had a puppet pal of your own? Check out the following DIY for an easy, fail-safe guide to making a basic puppet pal and the details for making Harry and Dumbledore. 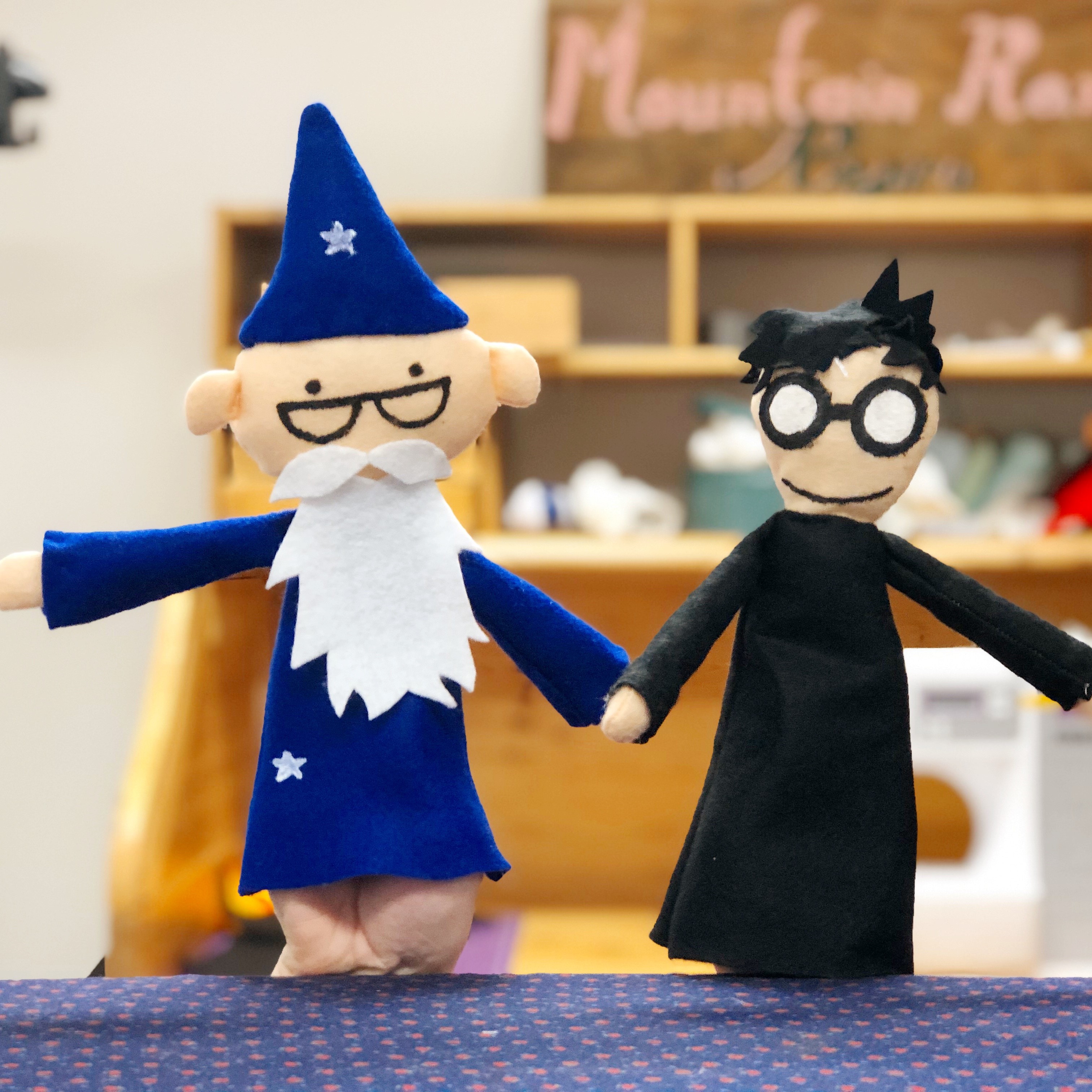 Step 1: Find a round object about four inches in diameter and trace it onto your skin-toned felt. Widen the sides into a more oval shape and cut out twice. Measure 1.5 inches in from the edge on one piece and make a mark.

Step 2: For Dumbledore, paint two round eyes at these marks. Using a ruler, make a straight line below these and paint his spectacles. 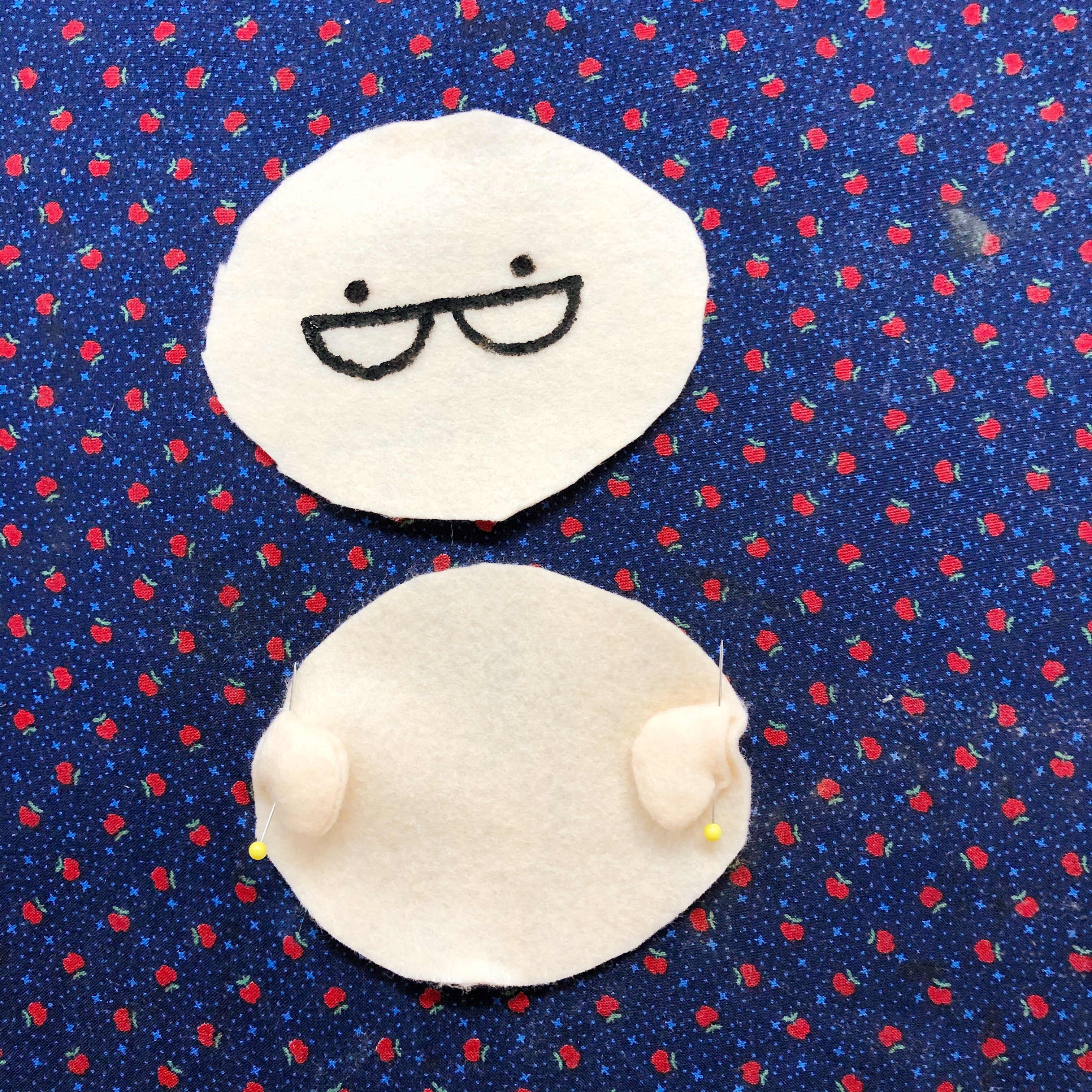 For Harry, use a coin to trace a circle around each mark. Fill these in with white paint and line with black, connecting in the middle to complete his glasses. Using white or red paint, draw a scar on his forehead. Add a small smile below. 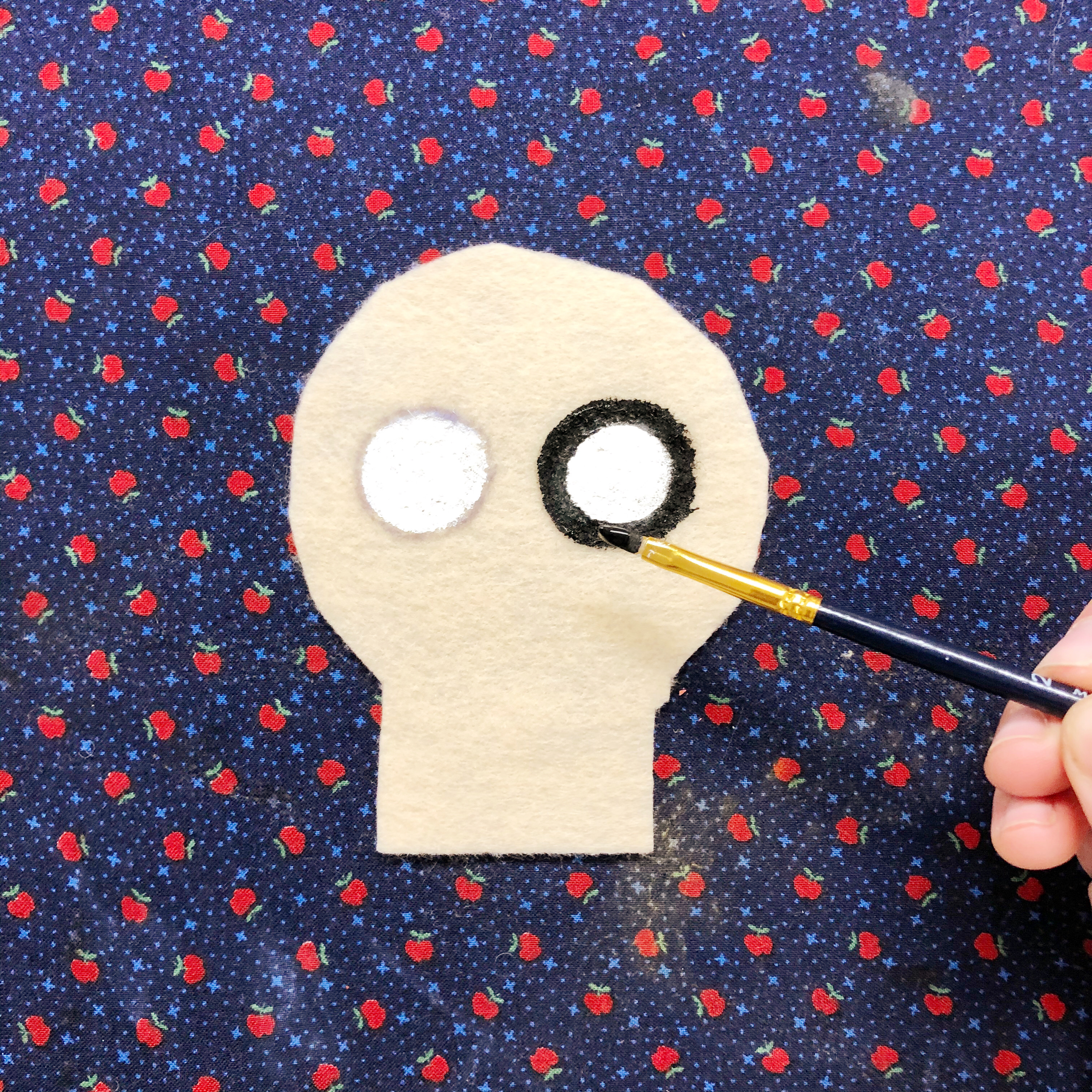 Step 3: For your puppet pal’s ears, cut out four pieces of felt roughly the size of your thumb, curved on one side and straight on the other. Pair them together and sew around the curved sides, leaving the straight edges open. Stuff with pillow stuffing. Pin the stuffed ears to the unpainted piece of felt and sew (see Dumbledore picture above). When your paint has dried completely, pin and sew both pieces of felt together, leaving a gap 1.5 inches across at the bottom. Turn right side out. 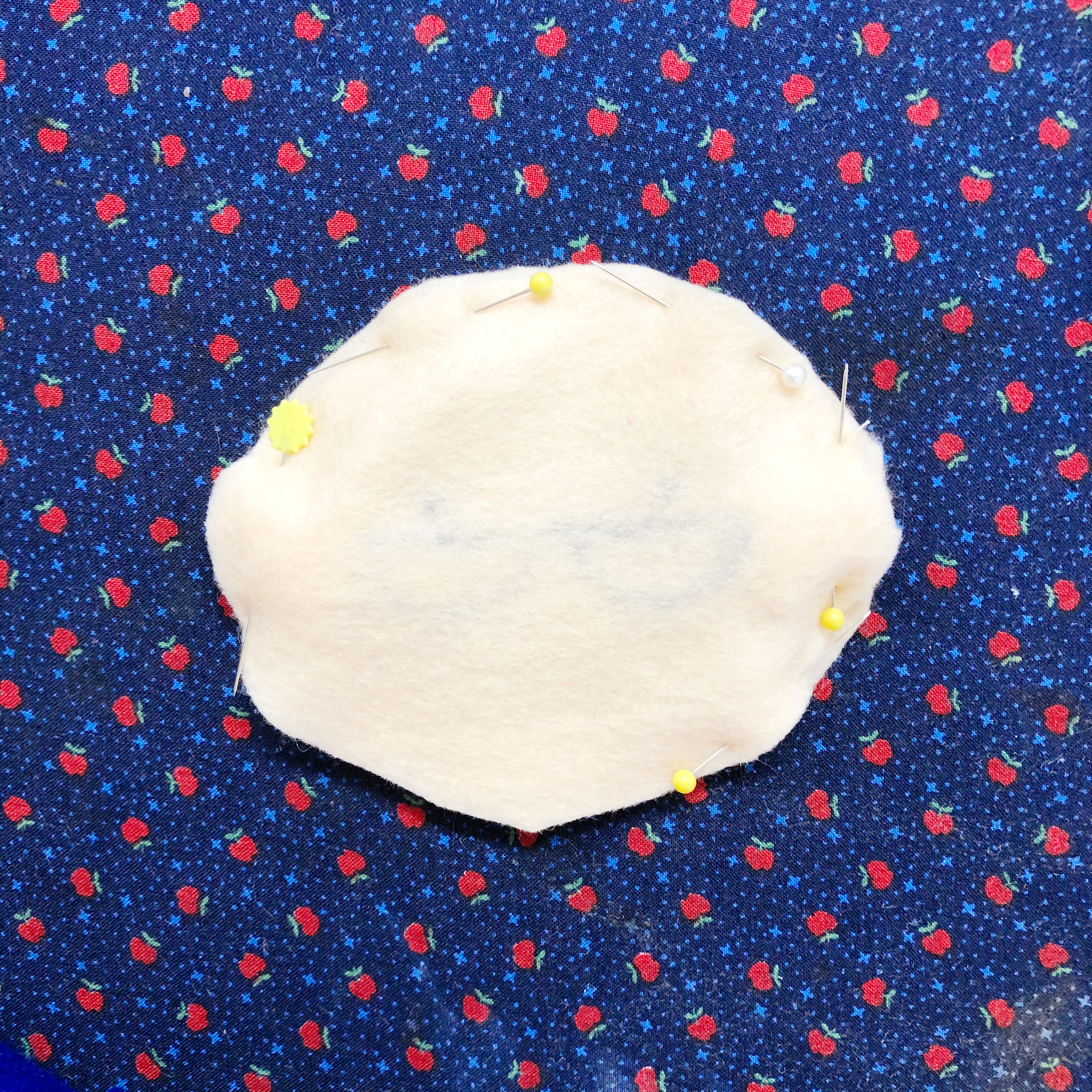 Step 4: Fill your puppet’s head with stuffing until there are no empty pockets but not so full that you can’t pin it closed. Sew up the open slit with thread that matches your puppet’s skin tone.

Step 5: Trace a parallelogram on the felt for your robes (blue for Dumbledore, black for Harry). It should measure four inches tall with a base of four inches and a top of two inches. Cut two of these and fold in half. Sew up the side sleeve, backstitching at both ends, and turn right side out. 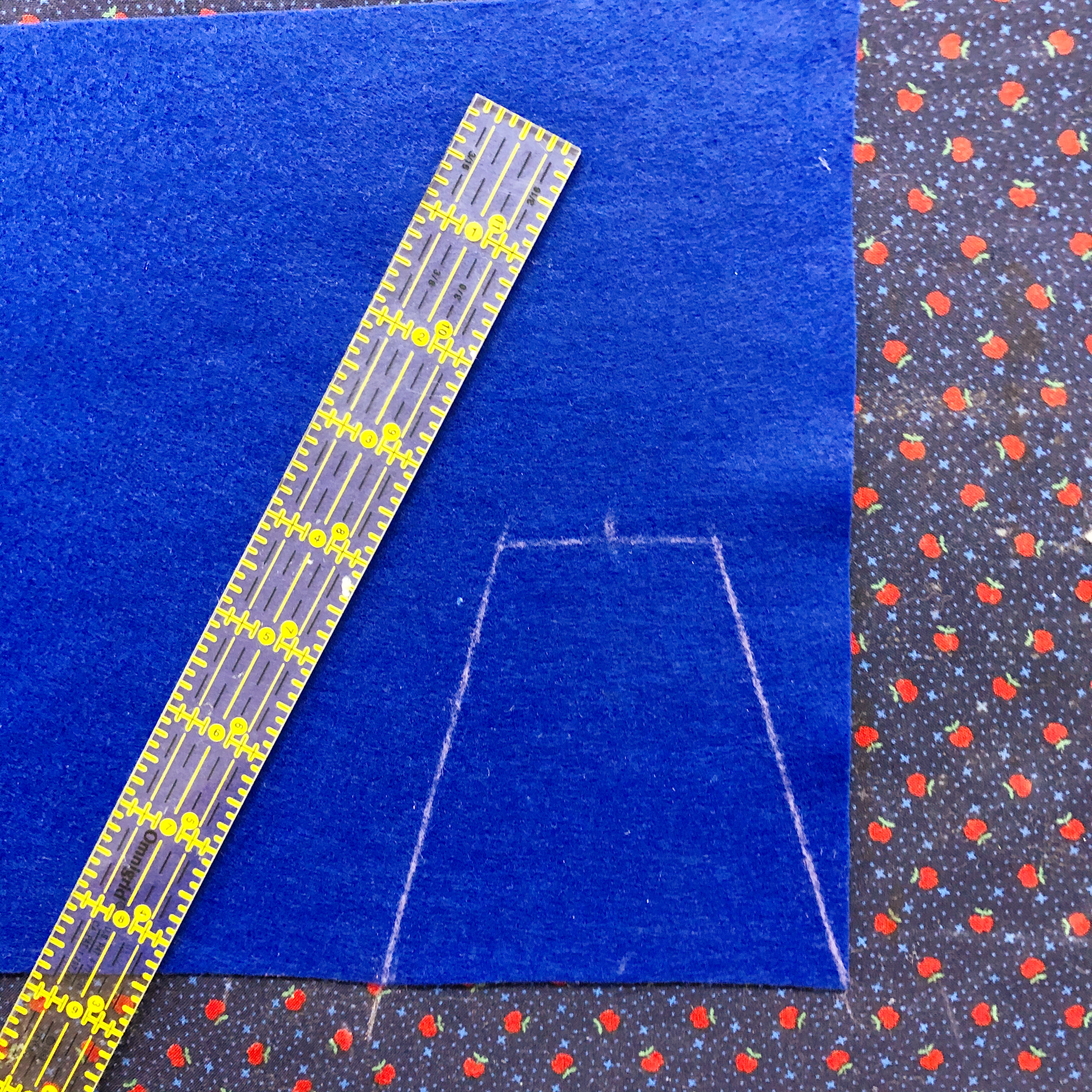 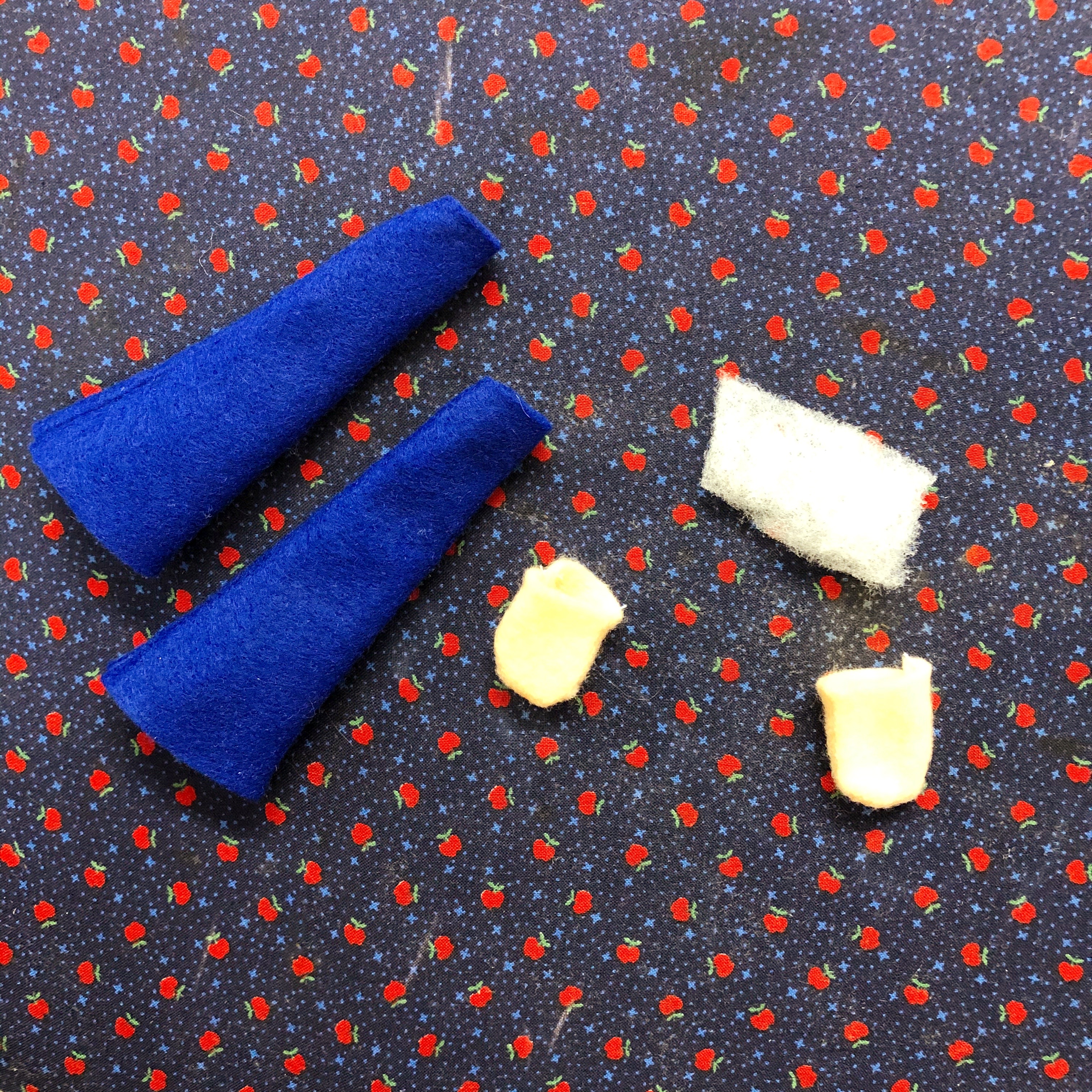 Step 7: Pin your stuffed hands just inside the wide end of your sleeves. Thread a needle with thread that matches the robes of your puppet and tie a knot in one end. Carefully slip stitch the puppet hands inside the sleeves, making short stitches on the outside and long stitches through the hands.

Step 8: Cut out another two parallelograms from your robe-colored felt measuring four inches at the base, two inches at the top, and seven inches tall. Pin your arms to the edges of one of the pieces of felt and sew in place, making a cross with the arms to ensure they lay properly. Pin the other side of the robes on top (with the arms between them) and sew both edges. Turn your robes and arms right side out. 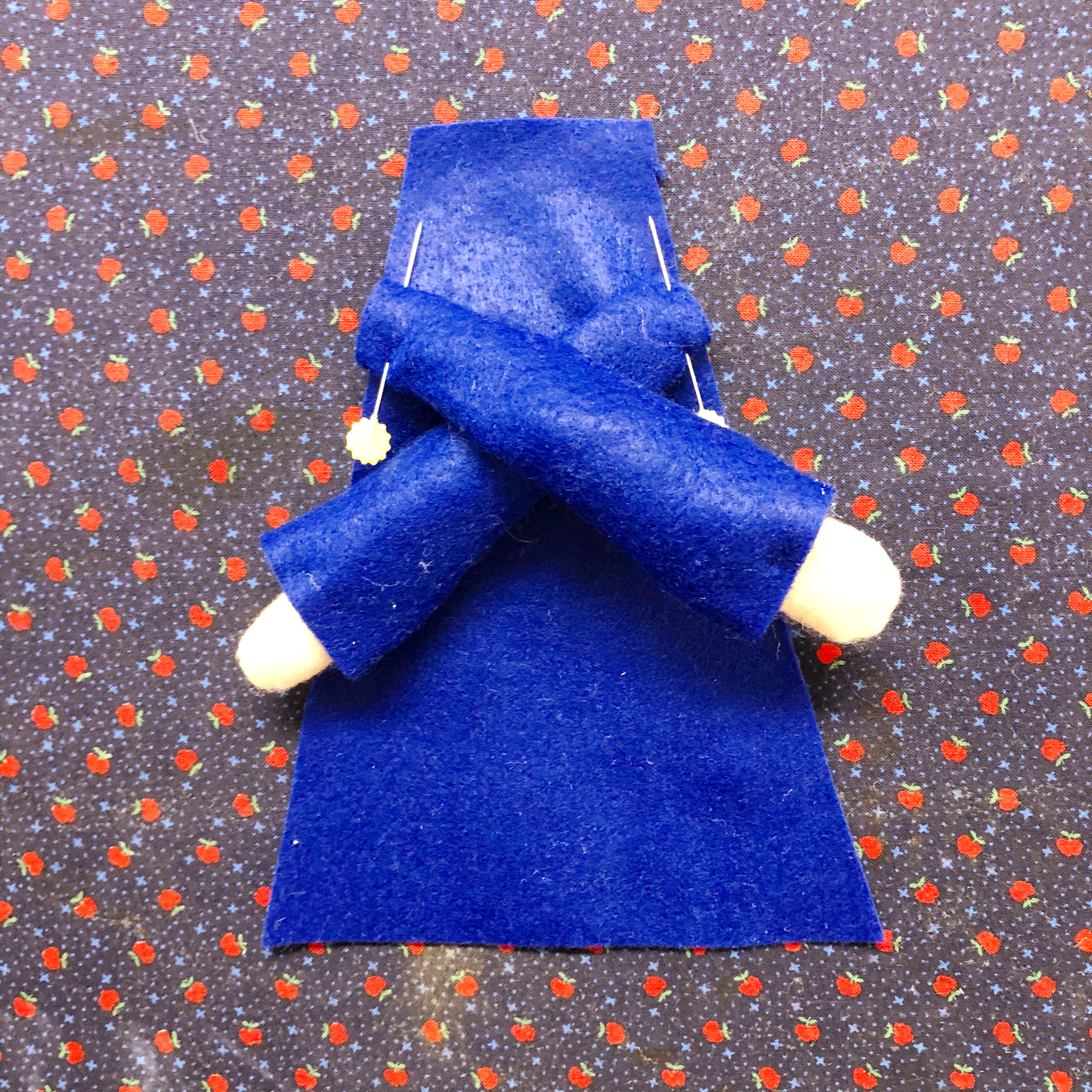 Step 9: To attach the head, fold in the neckline of your robes. Place the puppet head over the neckline and pin in place. Using needle and thread (matching the robe color), carefully stitch the head to the robes using a slip stitch. If necessary, go around twice to ensure it’s secure. 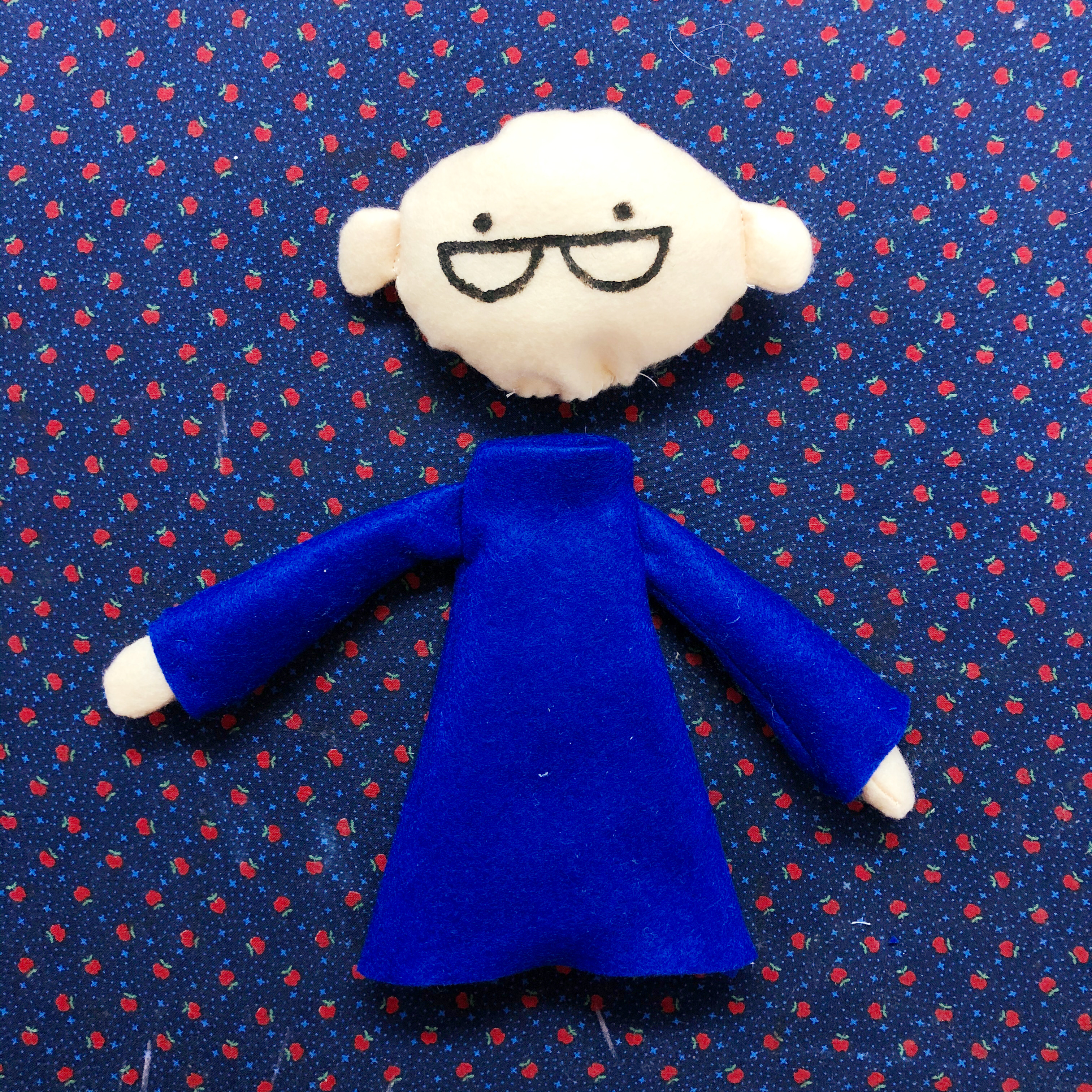 Step 10: For Harry, cut out three or four jagged pieces of black felt and sew them one by one to his head using small stitches in black thread. 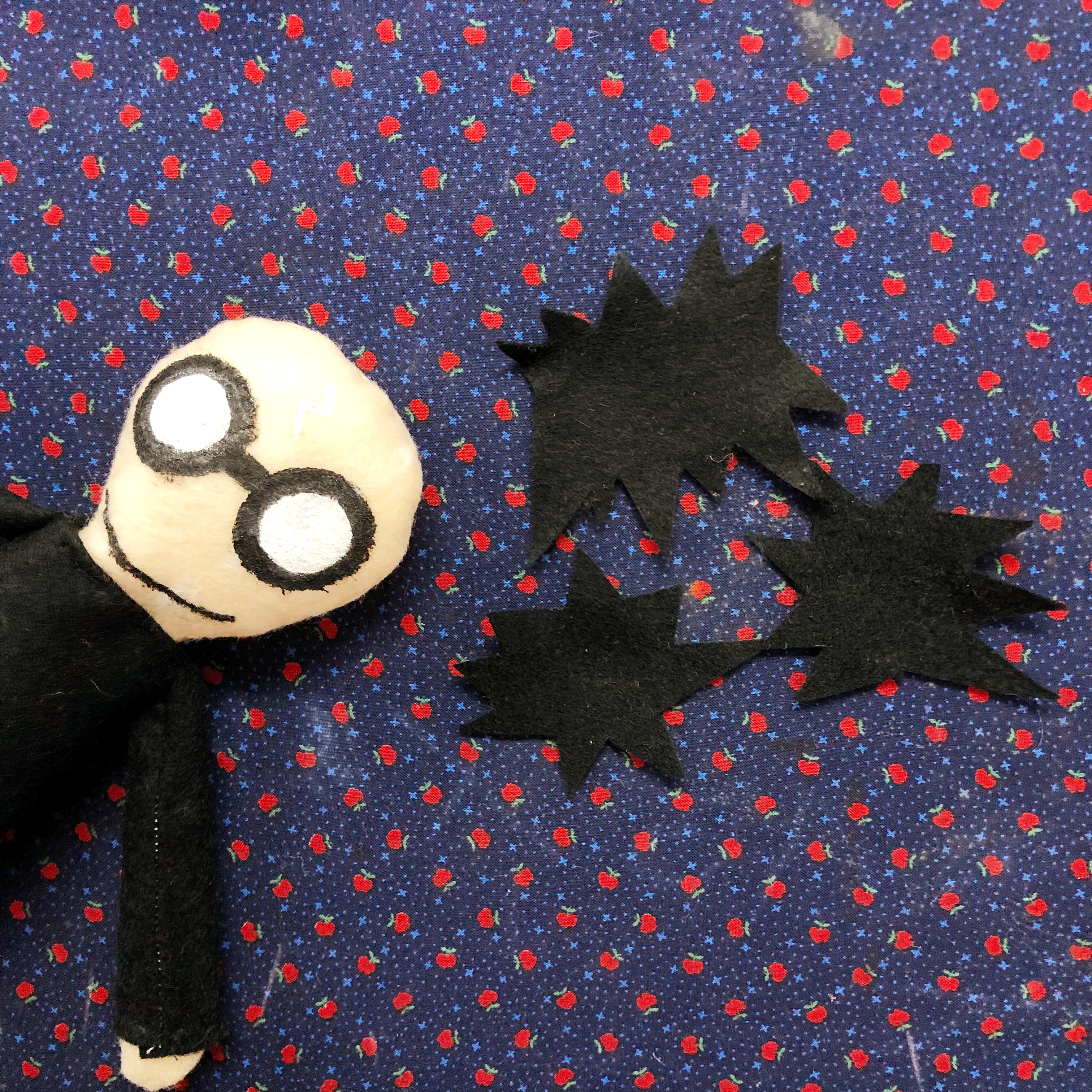 For Dumbledore, cut out two triangles of blue felt and sew them together along two sides. Flip right side out and slip stitch the brim of his hat under. Paint a white or silver star in the center of his hat and several more stars on his robes. When the paint is dry, stuff his hat with pillow stuffing and pin it to his head. Carefully slip stitch around the brim using thread the color of his hat. 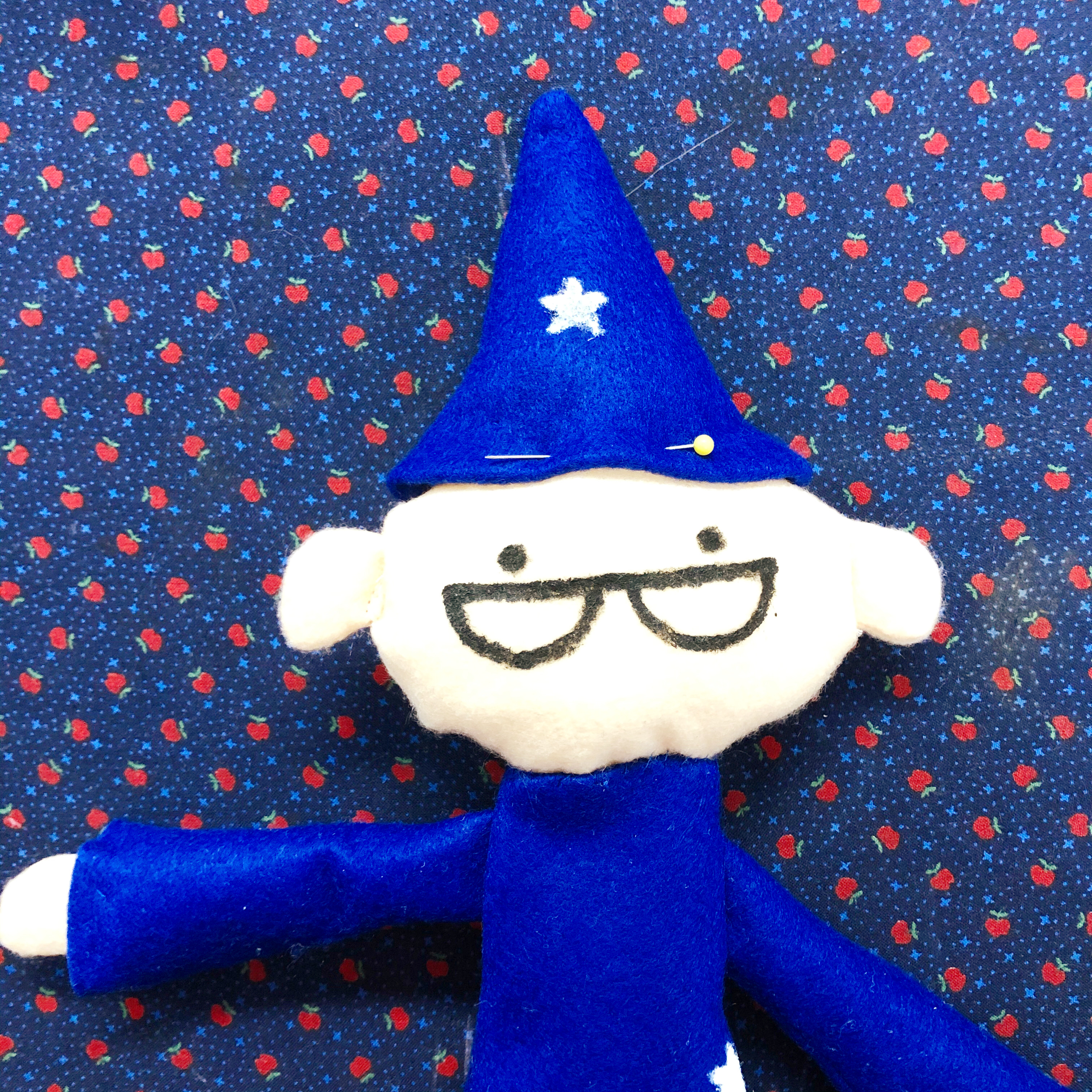 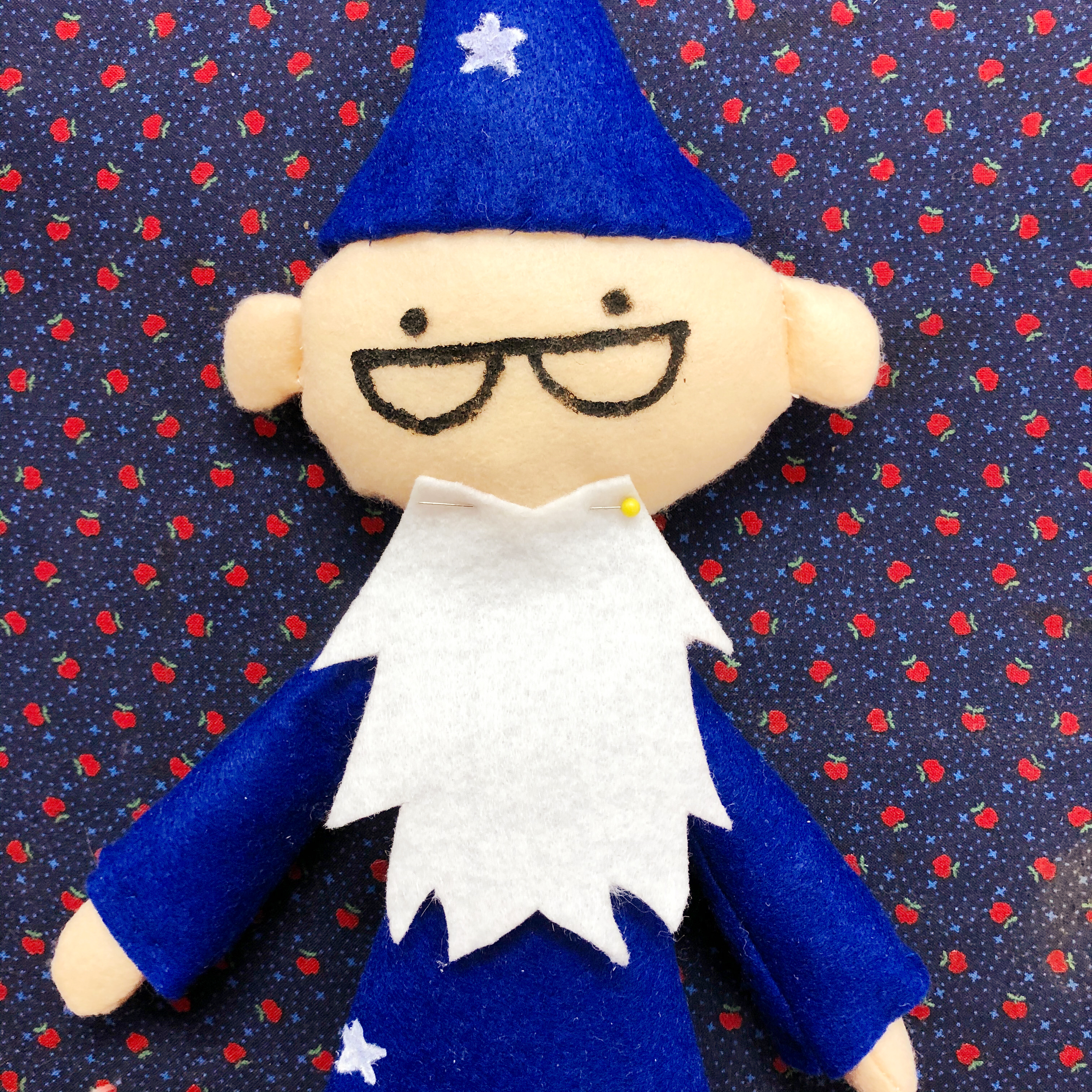