When I first found out I was doing a review for YuMe Toys, I was beyond excited. I love their products and already have several of their mini plushies, including Dobby and Hedwig. When I first opened the box, I was a little disappointed when I saw the lack of plushies, but that feeling was quickly replaced with happiness as I saw the rest of the goodies they had to offer. The Harry Potter Infinity Box offers a variety of exclusive merchandise, ranging from keychains to stuffed toys. Each box’s contents are chosen randomly. 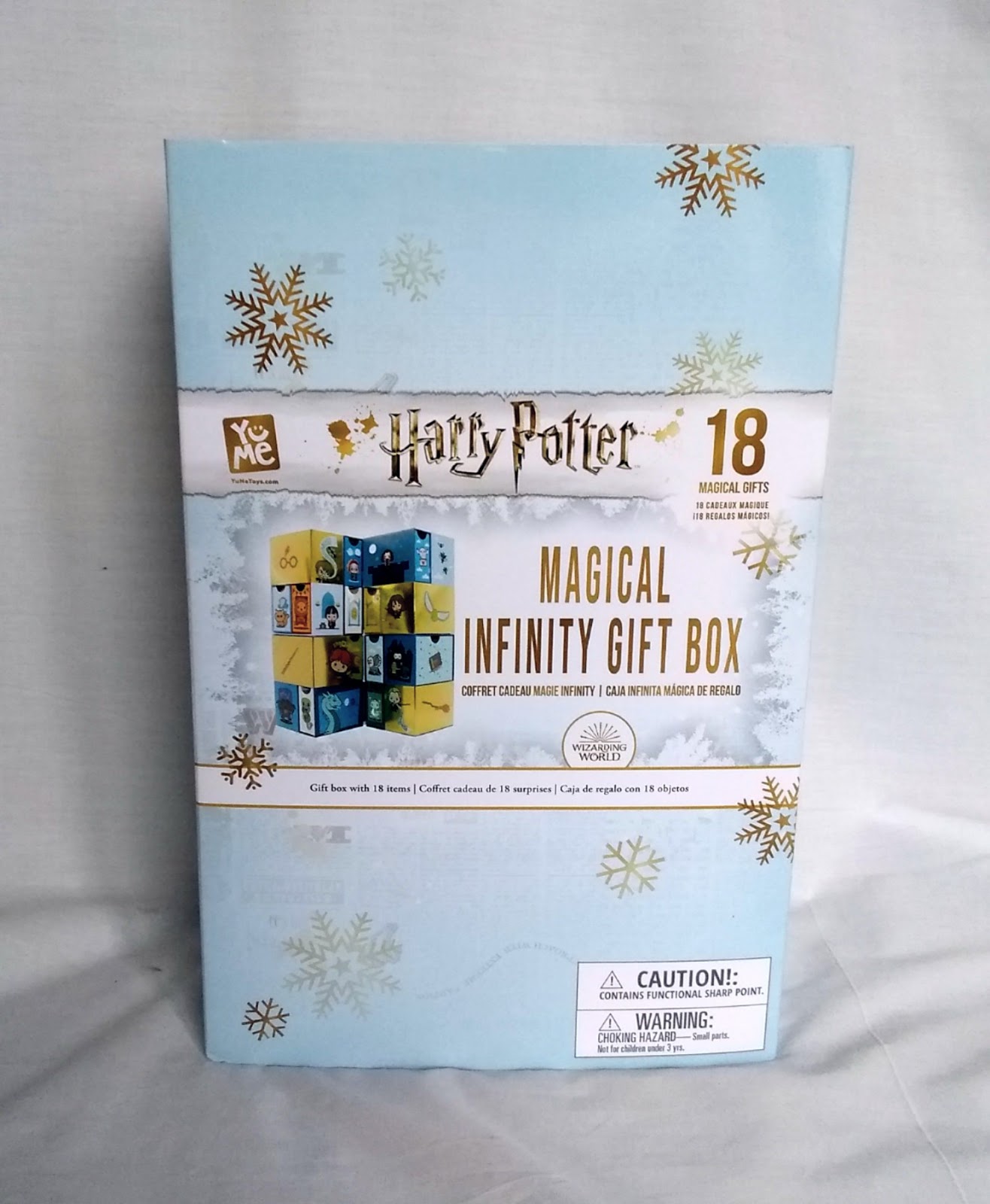 The box comes in a blue wrap packaging, which gives information on the box’s contents. Although there are snowflake prints, this box isn’t exclusively for Christmas!

I found out quickly after opening it that YuMe was not joking when they said “infinity box.” I could open it about five times before it finally reached an end, and each time I opened it, there was a new photo printed on the side. On each side were several drawers, which you pulled out to reveal the merchandise. There were 18 items in total. I’ve divided the items into three categories, for the sake of organization. 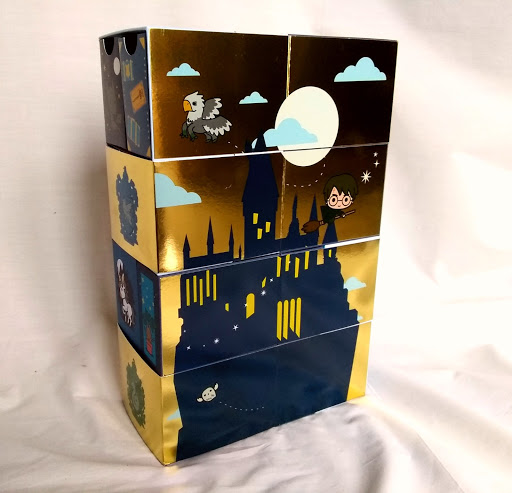 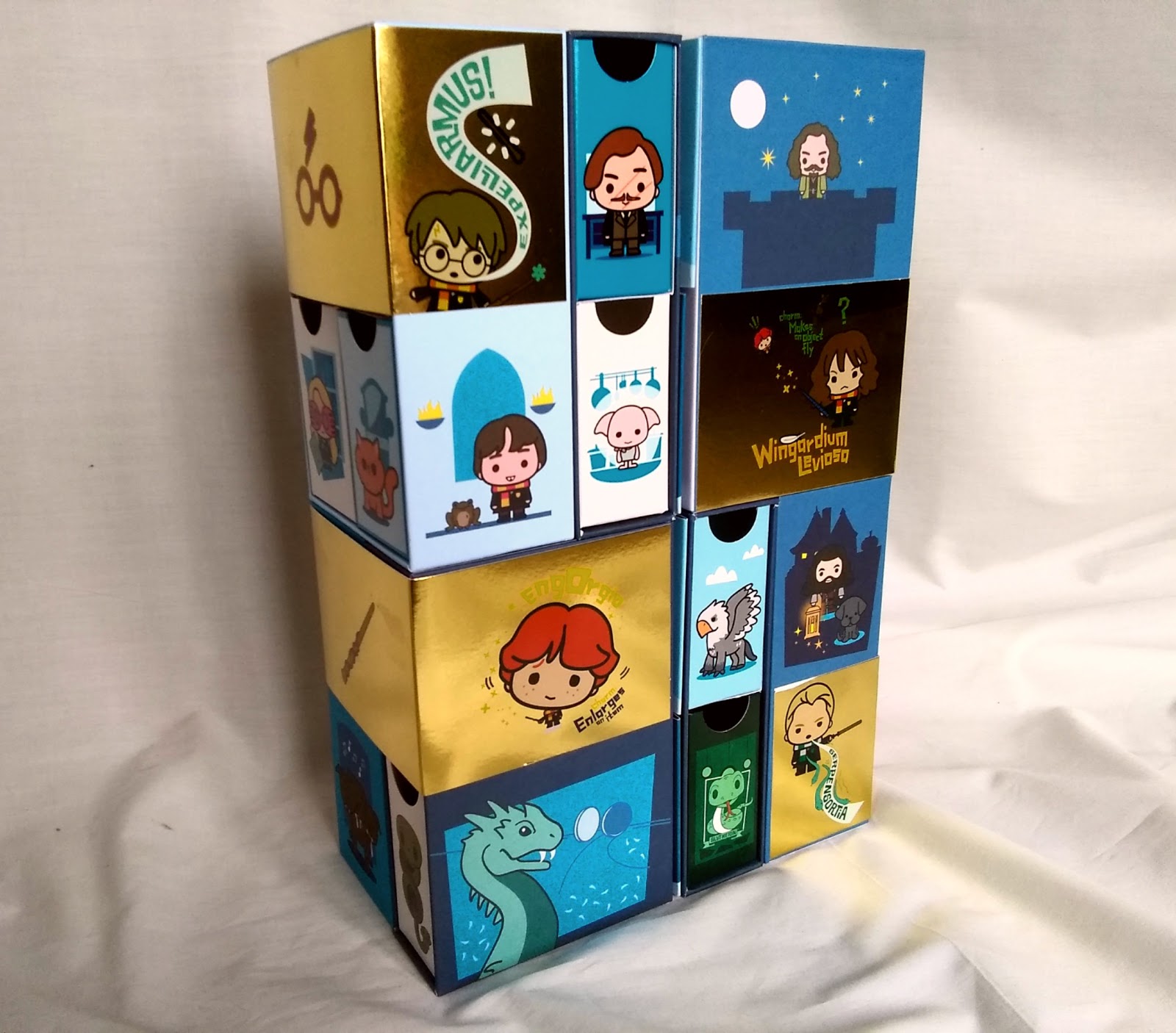 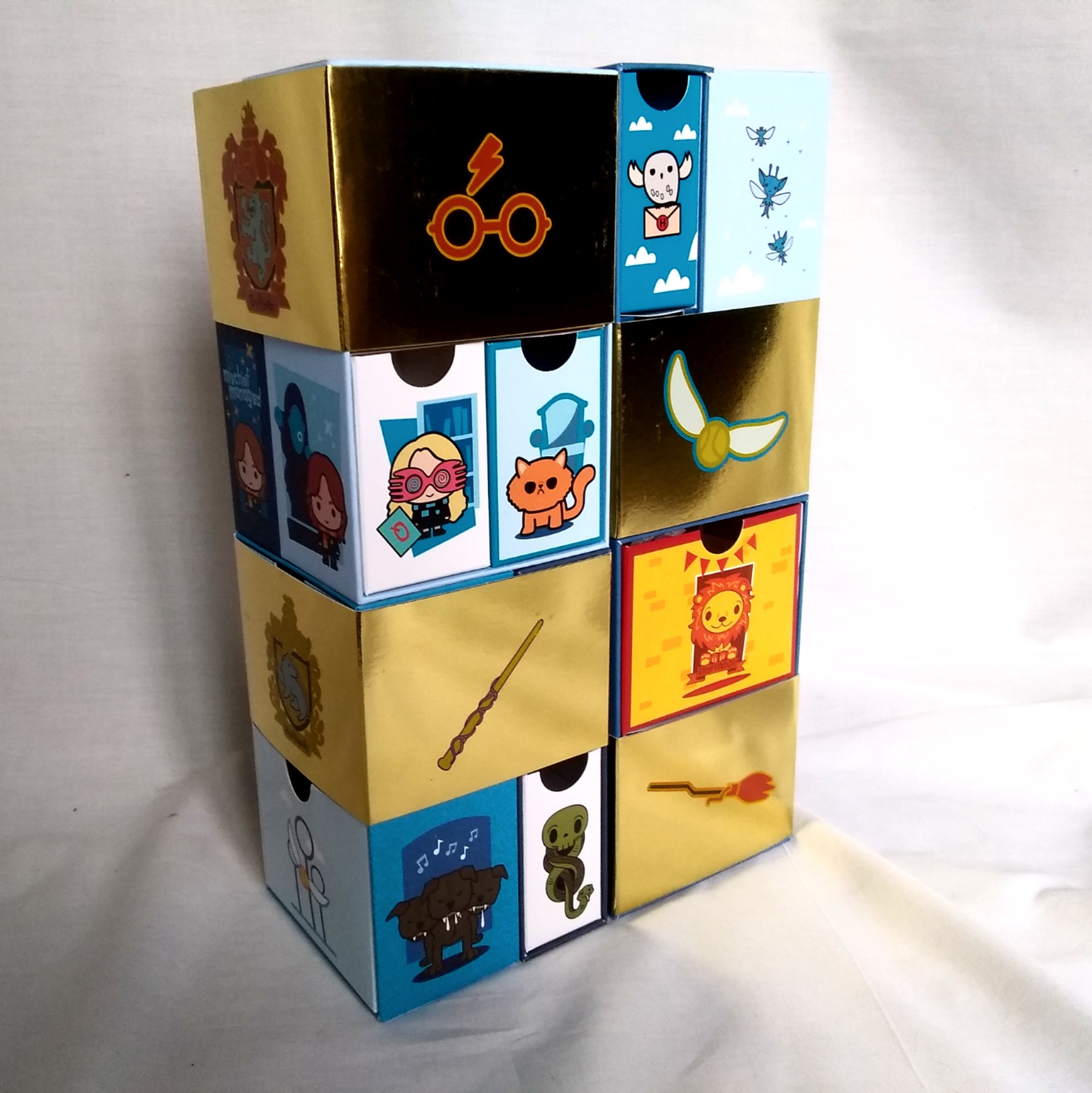 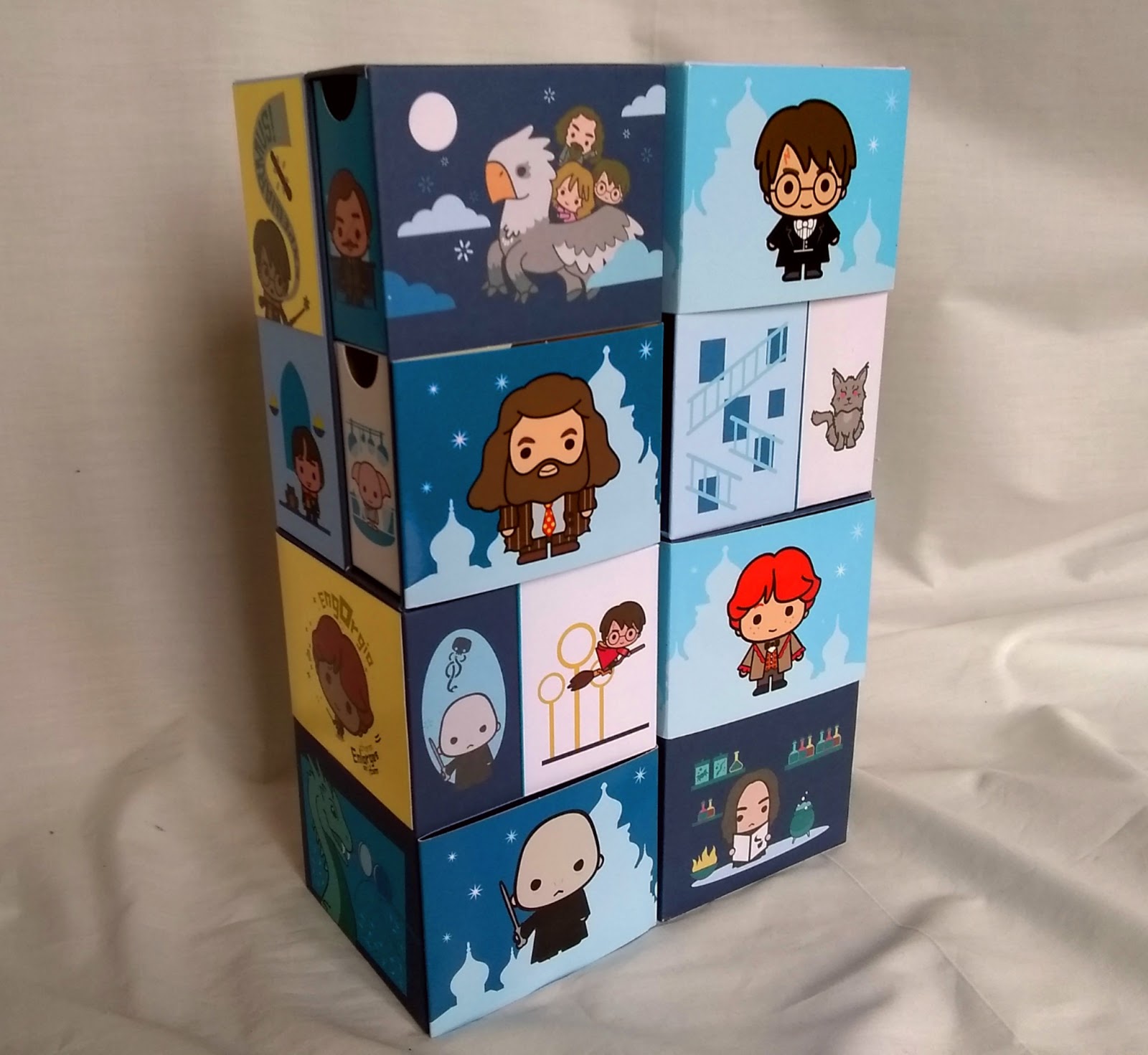 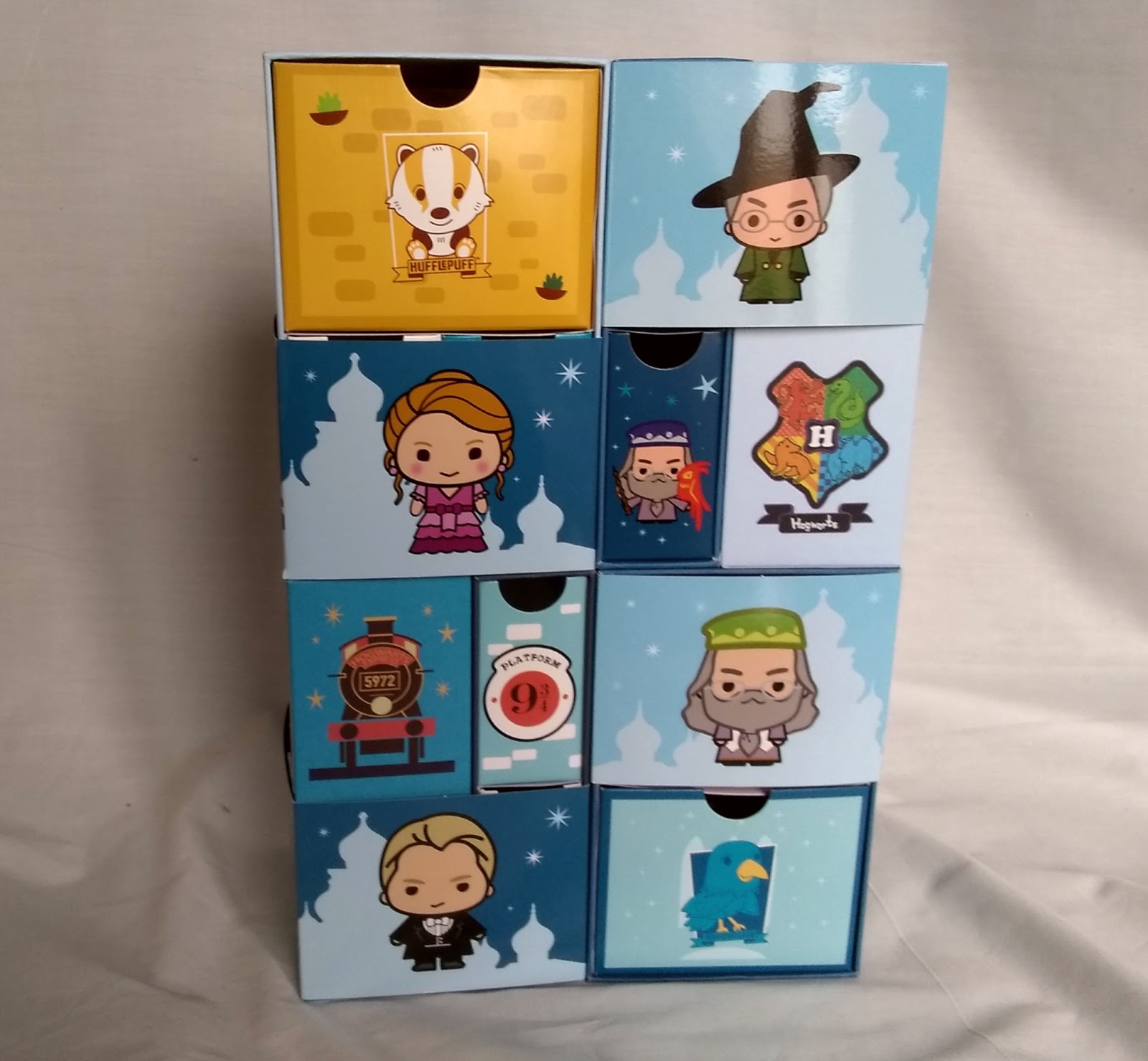 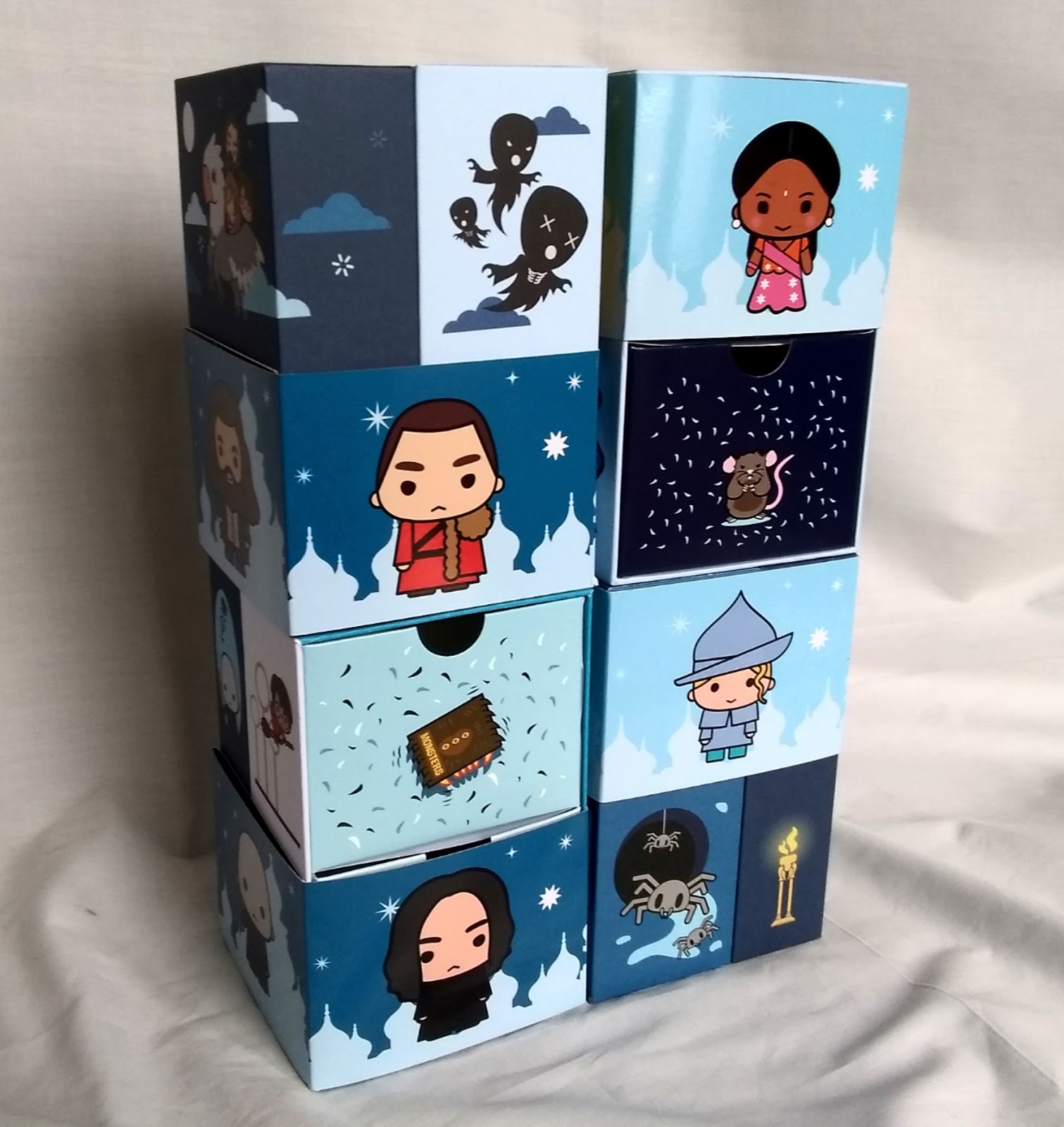 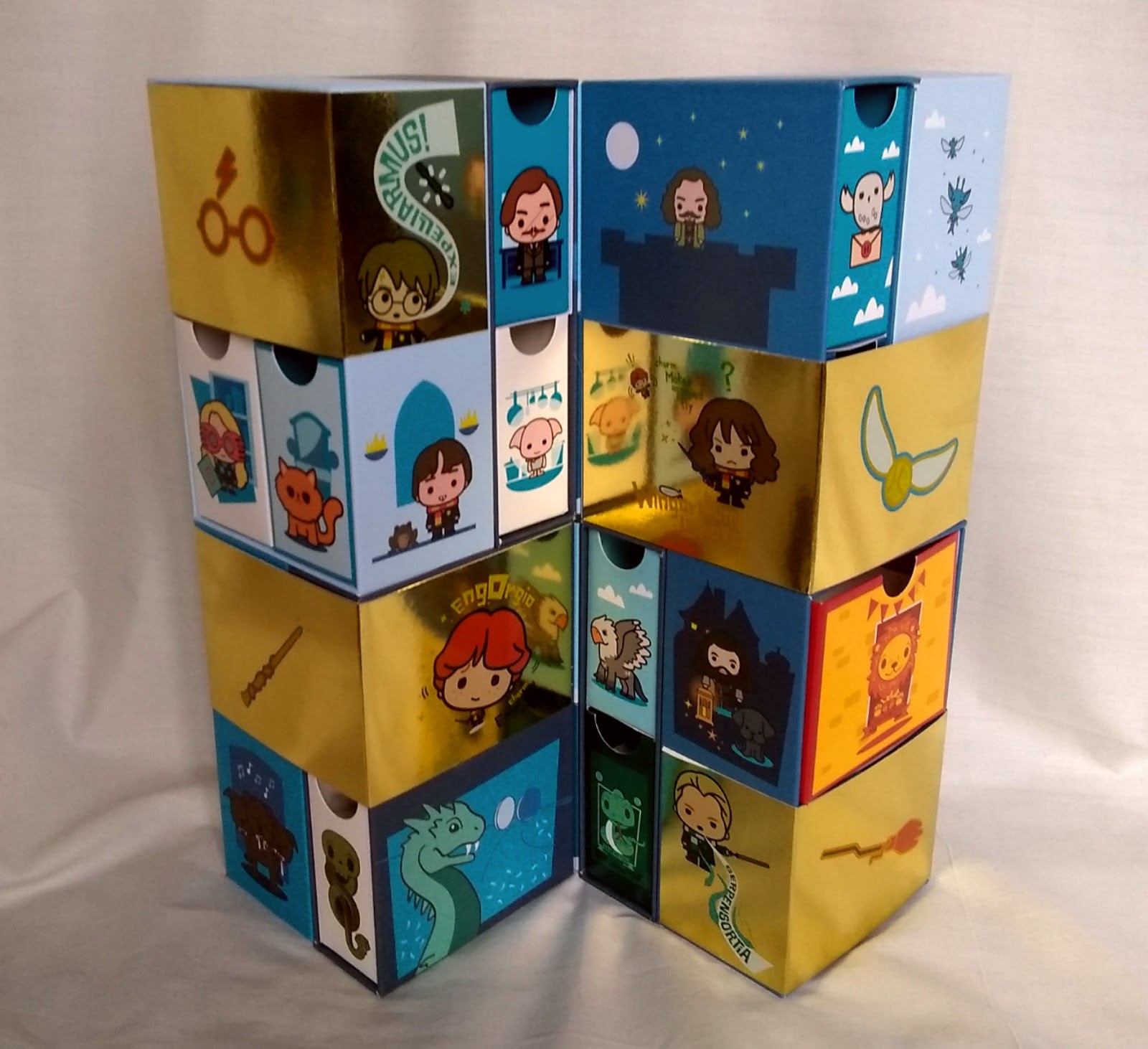 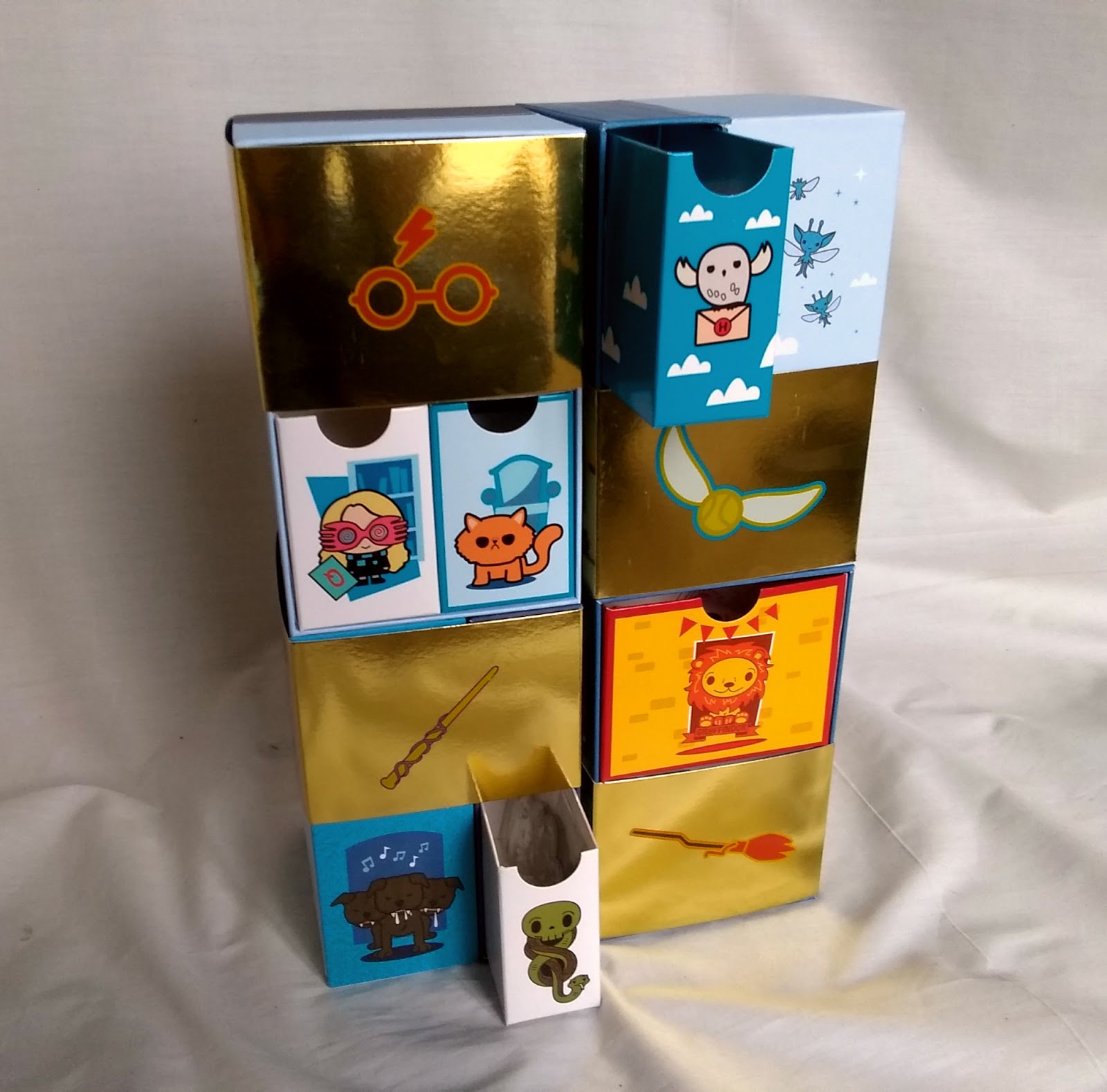 Let’s begin with the various trinkets. I firstly received two plushies, which are the exclusive Harry and Hermione Yule Ball editions. The plushies are extremely soft, small, and beyond adorable! Their outfits are very movie-accurate, and they have strings looped on the top, which I’m guessing make it so that you can hang them on a Christmas tree. However, you can also put them on a door handle or even just keep them on a shelf.

The next item was a cloth shopping bag. The fabric feels the same as that of an umbrella. The shopping bag was folded into a small square but opened into a large bag. It’s 100% reusable and has prints of the Harry Potter characters in the signature YuMe Toys art style.

I also received a glasses cleaning cloth, which has small patterns of the characters and is extremely soft. It can also be used as a handkerchief.

The last item in this category was a suitcase tag. The tag is very sturdy and durable, one side with an illustration of the Hogwarts Express, and the other with a spot for your name, phone number, and address. It’s perfect for heading back to Hogwarts! 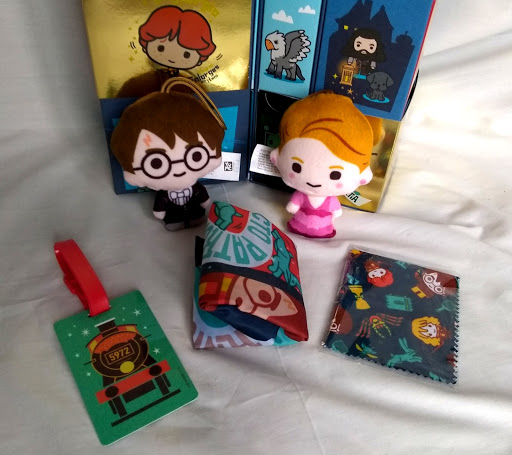 The two plushies were Harry and Hermione, each in their Yule Ball dress robes. There was a Hogwarts Express suitcase tag with a red loop, a shopping bag, and a cleaning cloth, with illustrations of the characters, including Hermione, Ron, and Harry, and other items that are important to the series, such as the Goblet of Fire and a spider. 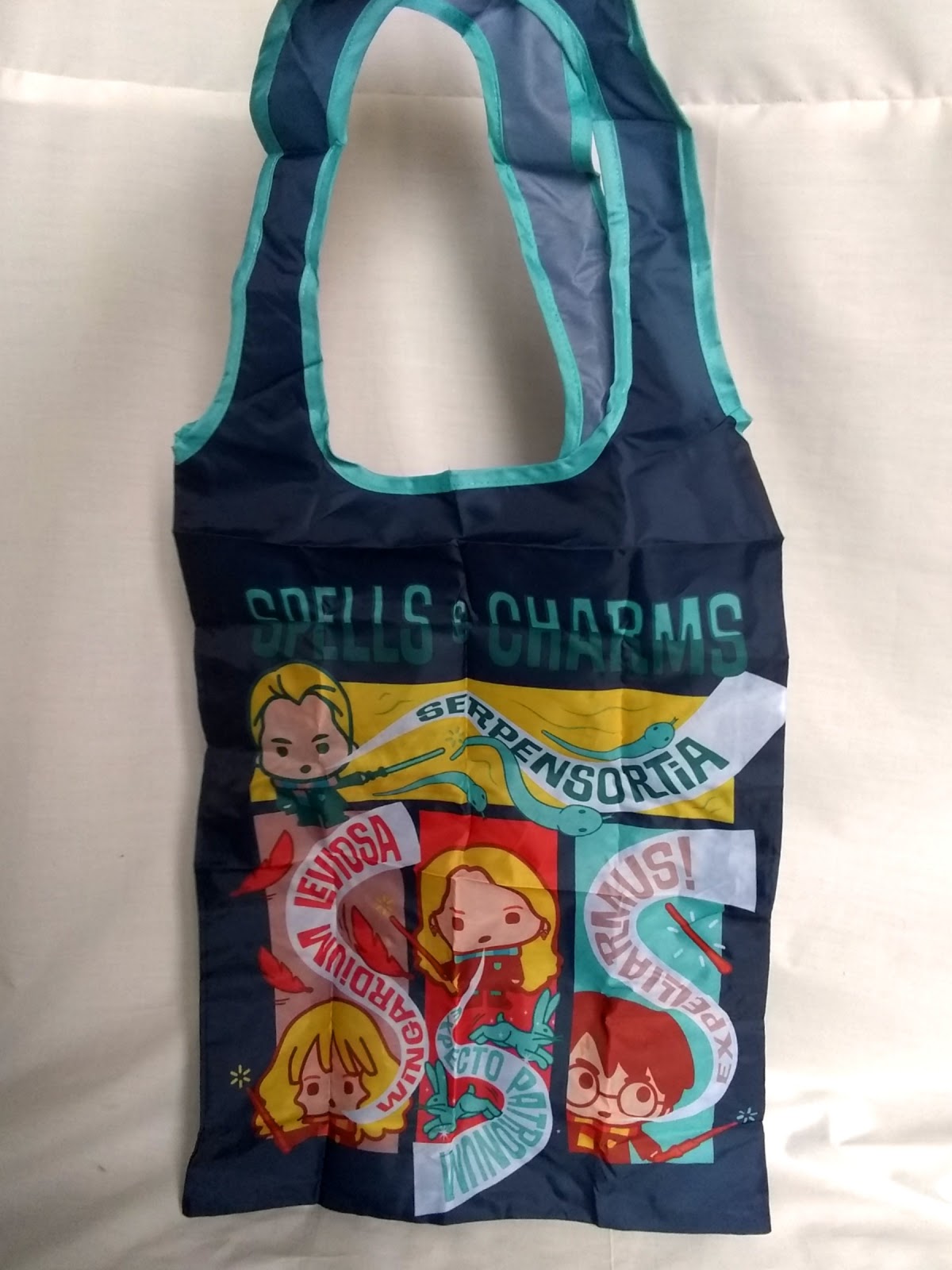 The shopping bag showcases Draco, Hermione, Luna, and Harry. Each of them has a wand, and next to them are speech bubbles with different spells from the series. The words “Spells & Charms” are at the top.

The next category is accessories. The first objects were two keychains, including the Yule Ball versions of Parvati and Hermione. The keychains are absolutely precious. I love how they included a less-mainstream character in the selection as well. It just adds to the magic. They are small but can work well on purses and backpacks.

The next item was a Dark Mark iron-on patch. I was surprised at how cute it was. For such a terrifying concept, they really made it seem charming. It vaguely reminded me of the homemade Dark Mark from A Very Potter Musical – which simply added to my love for the product. It’s perfect for adding to cloaks or robes or even to a Muggle denim jacket.

There were also two pins, which show Harry and Hermione in their dress robes. The enamel pins are very high quality. They come with sturdy backings and won’t easily fall off. They are a bit small but still adorable. They can be added to a bag or even a jacket or backpack. 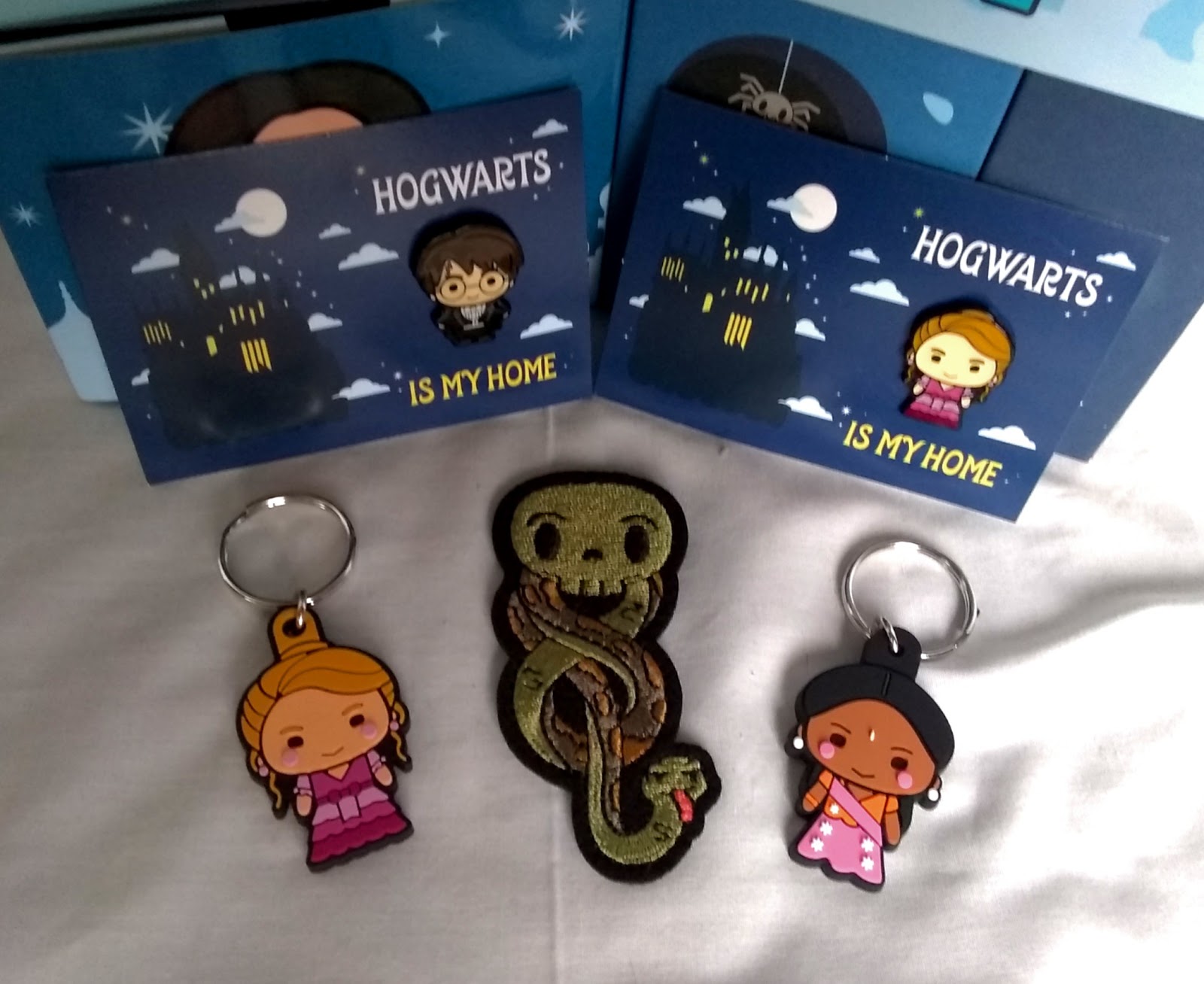 There were two pins of Harry and Hermione in their Yule Ball outfits, on pieces of cardboard that have illustrations of Hogwarts with the words “Hogwarts Is My Home.” There were also two keychains of Hermione and Parvati, both in their dress robes, and a Dark Mark iron-on patch.

The last category consists of stationery. I was shocked at how many stationery products there were. I firstly received a small pad of paper with a Harry Potter print. The pad of paper is surprisingly thick. It could last me several months, if used sparingly. The print is very faded as well, so as to not interfere with any writing. I also received a Hedwig and Buckbeak eraser. The erasers are thick and not at all flimsy and useless. Although, I don’t want to use them because they’re just too cute! However, they can work for school or just at home.

There was also a pack of Hermione stickers. There were several stickers, each with the same print, which can be used for letters or scrapbooking. The box also contained two washi tapes – one with prints of the animals of each Hogwarts House and the other with prints of the Harry Potter characters. The washi tapes are absolutely adorable and have a fair amount of tape in them. The tape is fairly thin, though, so be sure to apply it to a blank space so nothing shows through.

The last items were five magnets in total, which included the four Hogwarts Houses with their adorably drawn mascots and Hedwig. There were more magnets than anything else in the box, and each of them works great! They stick very well and seem durable. I absolutely love them. 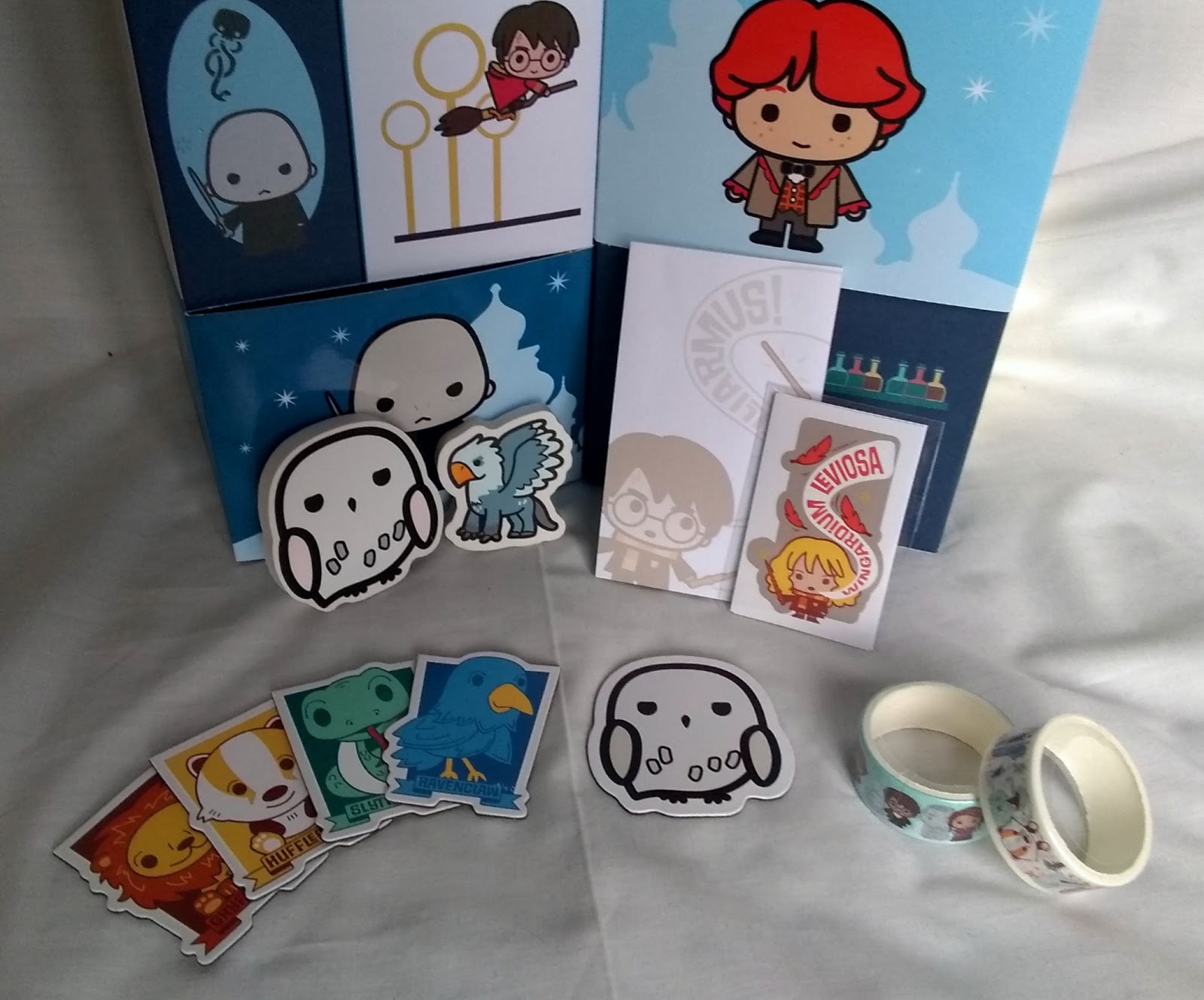 There were two erasers, one of Hedwig and the other of Buckbeak, a pad of paper with a faded print of Harry saying “Expelliarmus,” a pack of small Hermione stickers that say “Wingardium Leviosa,” four Hogwarts crest magnets, a Hedwig magnet, and two washi tapes. The tapes have illustrations of the characters in their dress robes and with the animals of each Hogwarts House.

The YuMe Harry Potter Infinity Box contains so many wonderful and useful items. No item is repeated, and each print and design is adorable. YuMe really did a fantastic job with this product. There was magic at every angle, and each time I opened it, I was completely surprised! I wasn’t disappointed in the slightest with this product and had so much fun seeing the hidden surprises and opening every drawer. Any Potter fan needs to have this!

A Harry Potter Infinity Box was provided by YuMe Toys. All opinions belong to the reviewer.