“Queerbaiting… is characterized by a strategy designed to capture queer followings by ‘suggesting a queer relationship between two characters, and then emphatically denying and laughing off the possibility,'” scholar Joseph Brennan writes, and it is precisely this phenomenon that is the subject of Queerbaiting and Fandom: Teasing Fans through Homoerotic Possibilities. The volume, edited by Brennan and published by the University of Iowa Press, features essays from numerous contributors on the subject of fleeting homoeroticisms within fandom contexts. As Brennan notes, the lack of official acknowledgment by those in charge of a property or franchise of an LGBTQ+ pairing can sting for fans who seek the representation that a canon LGBTQ+ pairing would provide.

As someone who identifies as pansexual, I was thrilled to have the opportunity to sink my teeth into something that has continued to frustrate countless members of the LGBTQ+ community. The book’s publisher, University of Iowa Press, notes that this is the “first-ever comprehensive examination of queerbaiting.” 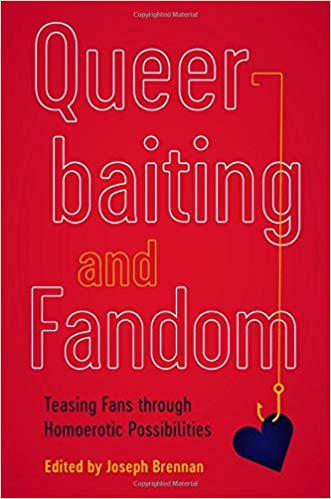 The cover of “Queerbaiting and Fandom”, edited by Joseph Brennan, is pictured.

Brennan is careful to acknowledge that just as fandom has evolved over time so has terminology in the LGBTQ+ community. In keeping with Brennan’s perspective as well as that of many scholars of queer theory, I will use the term “queer” as an umbrella term in reference to LGBTQ+ identity as necessary in this review.

Duggan’s essay looks at the Harry Potter franchise and the relatively recent accusations of queerbaiting that have been leveled against it as well as the ways in which fans have read certain characters as queer (such as Remus Lupin and Sirius Black). This examination of the many expansions of the franchise over the years – including J.K. Rowling’s own input outside of the text(s) – is refreshing and articulates the many ways in which non-normative sexualities have been framed or erased in the franchise.

The discussion of Rowling’s decision to out Albus Dumbledore following the publication of Harry Potter and the Deathly Hallows stands out, given the extent to which it has been featured in fandom circles. Duggan, for instance, suggests that Rowling’s comments on Dumbledore’s homosexuality are indicative of implicit biases and highlights the way in which Rowling has gone between establishing canonical elements of the wizarding world outside of the texts and stating paradoxically that she intends to leave the fictional universe of her creation open to interpretation.

This became clear with the publication of the script of Harry Potter and the Cursed Child in 2016. While Duggan addresses the play and its treatment of masculinity, Cassie Brummitt and Kieran Sellars take up one particular scene in Cursed Child as their focal point: Act 4, scene 14, in which Scorpius Malfoy makes his desire for Rose Granger-Weasley known. Brummitt and Sellars express disappointment with J.K. Rowling, Jack Thorne, and John Tiffany’s handling of the “potential queer readings” of the relationship between Albus Potter and Scorpius Malfoy, noting the parallels that it shares with the relationship between Severus Snape and Lily Evans. Likewise, Brummitt and Sellars lay out the extent to which Act 4, scene 14 swiftly erases the queer subtext present earlier in the play.

As Brummitt and Sellars question “the legacy of only having heteronormative relationships realized within the canon,” it remains to be seen what will happen as other elements of the wizarding world – such as the Fantastic Beasts film series – continue on.

Interested in reading the book for yourself? Get your copy today.

A copy of Queerbaiting and Fandom: Teasing Fans through Homoerotic Possibilities was provided by the University of Iowa Press for review.