It doesn’t seem possible that we’ve crammed nearly six full in-game years of magical education, friend- and enemy-making, and plenty of Hogwarts’s trademark age-inappropriate levels of danger into just two years in the real world. But believe it or not, Harry Potter: Hogwarts Mystery just celebrated its second anniversary! With that milestone came the introduction of two all-new locations, and we have that plus details on a pair of upcoming events in Harry Potter: Wizards Unite below. Phones at the ready!

Hogwarts Mystery's two-year anniversary party gave us not only an outfit that more accurately reflects the typical shelter-in-place wardrobe - a cozy onesie with House-specific slippers - but also a chance to let our hair down in our common rooms. Was it odd that we were the only partygoers to show up in our pajamas? Yes, but there was butterbeer and confetti, so who cares?

Harry Potter: Hogwarts Mystery is celebrating its two year anniversary today! Here's a look at all the magic and fun added to the game since the beginning 🙌#HogwartsMystery pic.twitter.com/ox9UeFUps7

Meanwhile, a contest in which you can design a new outfit that could be incorporated into the game is ongoing through May 15, so get those entries submitted!

We're also excited to have access to not one but two new locations, thanks to the Adventures in Curse-Breaking side quest: Gringotts Wizarding Bank and the Dragon Sanctuary!

That's just what you want to see when you enter your bank: Mundungus Fletcher.

There is indeed, Griphook, but since the developers are busy working on new chapters, we're here instead! After much begging, pleading, and eventual subterfuge, your character and Charlie Weasley were able to convince Bill Weasley to take a sampling of the Defense Against the Dark Arts class on a field trip to Romania. The mission: You're to help retrieve a long-lost dragon egg, crafted from solid gold by goblin smith Urgruff the Unwary and subsequently pilfered by a dragon. Griphook makes clear it's the most dangerous task Bill has been assigned to date, so this field trip is obviously a great idea!

Words to live by. But we're going anyway, and the Dragon Sanctuary doesn't disappoint.

It's a wonder Charlie didn't faint on the spot. Penny Haywood certainly doesn't look to be matching his enthusiasm, but everyone feels a bit better after setting up camp, complete with a tent on loan from Hagrid.

That would be more comforting if there weren't a dragon directly behind your head, Merula. Hey, let's have a quick time-out for a Doctor Who reference!

Moving on, we toasted marshmallows because it's always a good idea to put dragons in mind of roasting things. After that, it was time to adjourn to the tent to make every reader and writer of fan fiction's day.

This particular game, despite being played without the aid of Felix Felicis, didn't turn out well, and after a bit of light teasing from Bill about his lifelong dragon obsession, Charlie stormed off in the night to search for the golden egg alone and make us seriously question our continued wishes that he were an option in the dating side quests.

Long story short, we found the little twit in a Hungarian Horntail's cave, and after a brief duel, the dragon did an impression of us after binging television shows all weekend while eating nothing but sugary snacks.

Don't worry; it's not a diabetic coma. He's just sleeping. The egg was retrieved, Bill didn't get fired for taking a group of snacks into a den of dragons, and Griphook basically offered us a future job. All in all, it was an excellent quest that made the first House Quidditch match look extremely tame by comparison.

We just dueled a dragon, bro. Again. We fear nothing at this point. We were happy, though, to see at least some people practicing social distancing in the stands.

Congratulations on your victory, by the way! We're just assuming you won, considering those little circles were moving a lot slower in the House match than they are in this Clean Sweep challenge! What in Merlin's name? Who gave the Quidditch teams Red Bull? Here's hoping your reflexes are quick enough to earn the outfit prize - provided you want to look sort of like a pirate.

Last but not least, Hogwarts Mystery's most recent newsletter is teasing two exciting new developments. It appears we'll soon have an encounter with Dobby and the Malfoys (incidentally, we're calling dibs on that name in case we ever start a wizard rock band) as well as finally meet Professor Aurora Sinistra in Astronomy class! 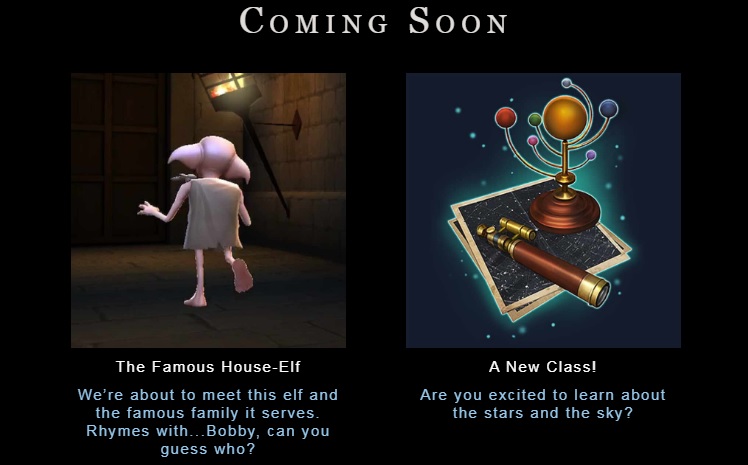 We hope you packed your Dramamine, wizarding world gamers, because the Knight Bus has arrived!

The Wizards Unite crew has come through in a big way for those of us who've been longing to take out our pent-up frustrations on a few Death Eaters. Via the icon in the top right-hand corner of your screen, the Knight Bus is now available to transport you instantly to a very special Fortress: Hogwarts!

It's been fun teaming up with total strangers to take down the forces of darkness, particularly since it's the most social interaction many of us have had in weeks. But for those still wanting to fight solo, just look for a Chamber with a player count of zero and hit that start button the second it appears. It works more often than not.

If you haven't already, many of you will be finishing off Part 2 of the Burrow Besieged Brilliant Event this morning, but there'll be no time to take a break for breakfast with the Weasleys. Wizards Unite has announced the Nature and Nifflers mini-event kicks off at 11:00 a.m. (PT) today and will continue through 11:00 a.m. (PT) on Thursday, April 30! 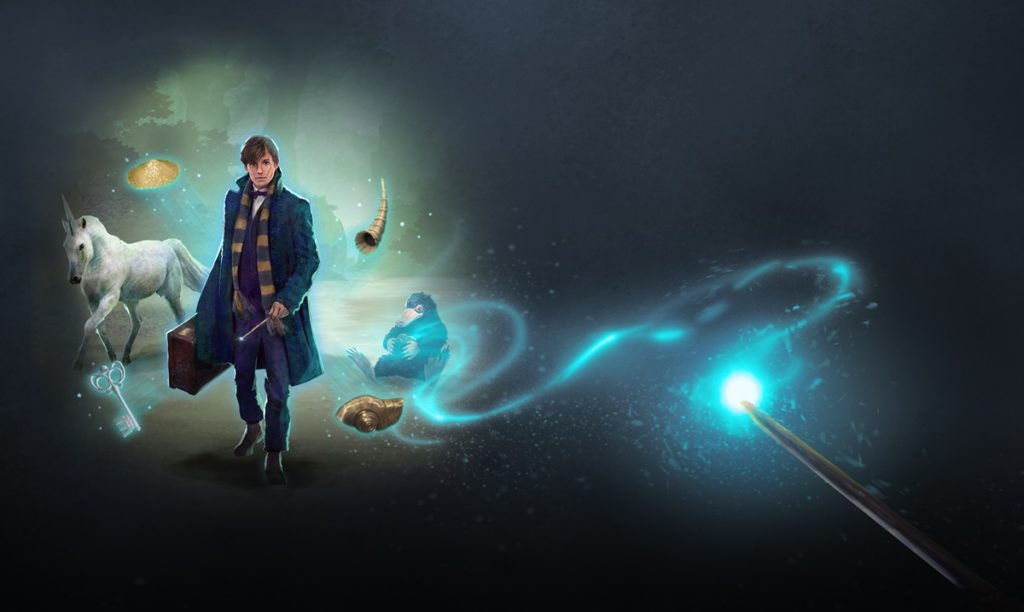 Keep your eyes peeled for signs of a new Oddity-like combat encounter, the Poacher! This dastardly villain is targeting Magizoology Foundables, and your help is needed to save our furry friends.

If you're wondering what "Oddity-like" means, it's this: Some purple Oddity Traces will be hiding the Poacher; defeat the creature and you defeat the Poacher, who will subsequently release any items and Magizoology Traces he may have been holding hostage. Traces will include Baby Nifflers, Billywigs, Mooncalves, Nifflers, Occamy Eggs, Unicorns, Young Graphorns, and their champion - Newt Scamander!

Successful encounters with Traces dropped by the Poacher will give you extra rewards, such as Tonic for Trace Detection, hard-to-find potion ingredients, silver keys, and gold. Tonic will also increase your chances of encountering Newt during the mini-event, and 1 km Portmanteaus will offer up Thunderbird and Occamy fragments.

Elsewhere in the good news department, Wizards Unite has decided to give gamers back the Community Day they lost in March! 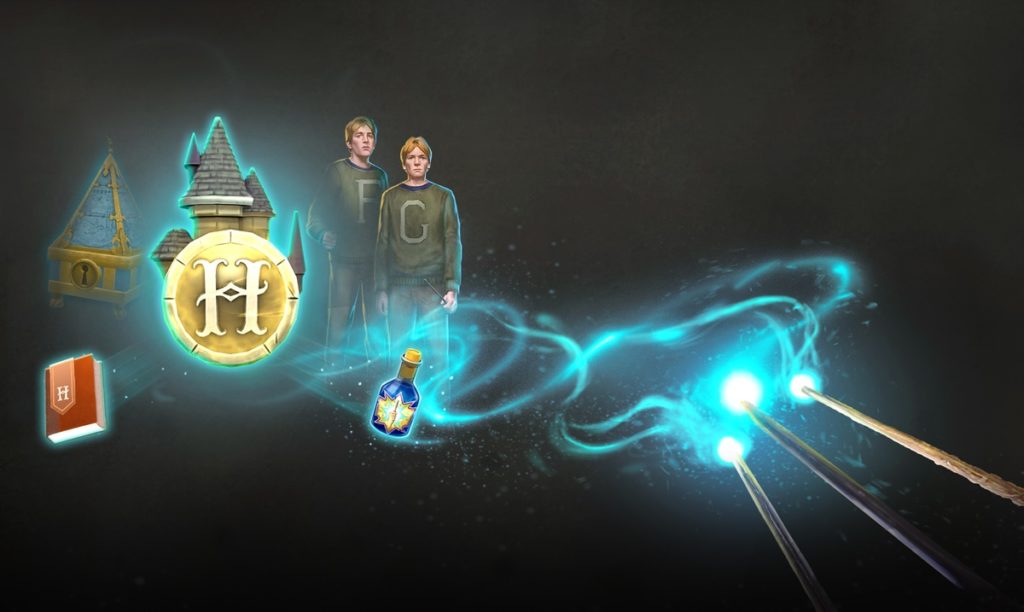 Expect to see an increase in Foundables from the Room of Requirement V Registry Page, including Fred and George Weasley! Encounters with the dastardly duo will pop up more frequently when you use Tonic for Trace Detection. It will also be a great day for Exstimulo Potions since brewing times for all varieties will be reduced by 75% and Master Notes will make a 50% difference rather than 15%. The event's 1 km Portmanteaus will also produce Portkeys offering guaranteed fragments of the Dumbledore's Army Signup Sheet.

Don't forget to grab your free bundles in the Diagon Alley Shop during events! That's it for the updates, but we'll leave you with a bit of inspirational in-game commentary from Professor McGonagall.

We're not crying, you're crying.