This Saturday, April 25, marks a special anniversary for Harry Potter: Hogwarts Mystery fans since it’s the second anniversary of the release of the mobile game. Jam City, the game’s developer, has revealed that players have logged over 35 billion gameplay minutes since its launch two years ago. Fans have explored the grounds of Hogwarts School of Witchcraft and Wizardry, played over 50 million Quidditch matches, cast 2 billion wizarding spells, and completed over 2 million OWL exams. 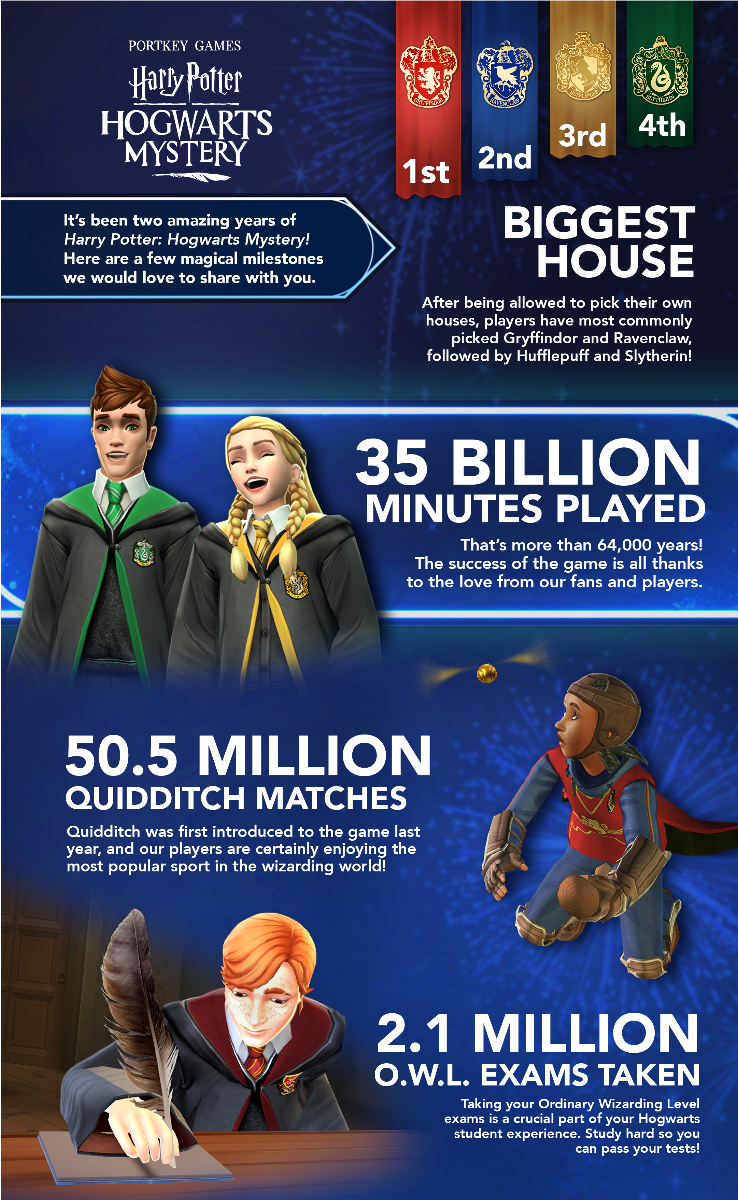 “Hogwarts Mystery” reveals the total gameplay minutes, the number of Quidditch matches held, and the most popular House.

Warner Bros. Interactive Entertainment published Hogwarts Mystery under the Portkey Games label in 2018. Once the game was released, it quickly became the #1 most downloaded mobile game in over 40 countries, including the United States. This immersive role-playing game is doing something extraordinary in honor of its second anniversary by inviting players to get creative for a chance to see their work live in gameplay.

Submissions will open on April 25, and fans are being called to create an original costume design that incorporates elements from all four Hogwarts Houses. Out of all the submissions, the developers will choose three finalists, and the fans will choose the winning design. Keep an eye out on the social media channels for Hogwarts Mystery for the official rules of the contest, but it has been revealed that the winning design is expected to be included in the game this fall. If you’ve been out of practice on the game for a while and want to get back to playing, get yourself up to speed with these wizarding world game updates. 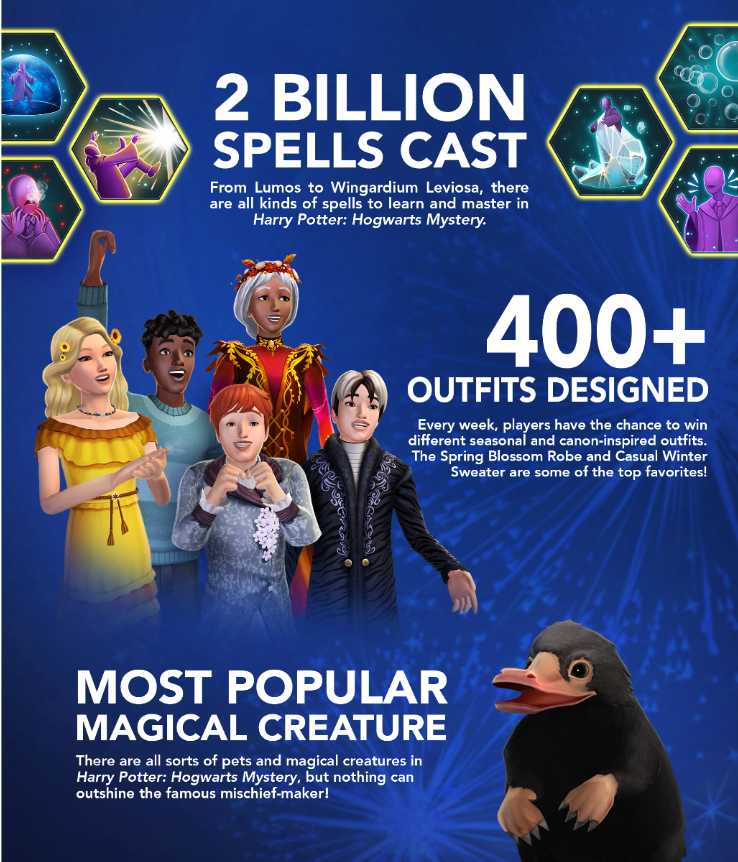 To show even more love for fans of the game, all players will receive the gift of a digital party onesie outfit with House-specific slippers on April 25. House common rooms will also be decorated with a party theme, featuring confetti!

Hogwarts Mystery is the only mobile game where you can go about living your fantasy as a student of Hogwarts. From beginning in Year 1 to gaining the prefect badge in Year 5, Hogwarts Mystery has given us exciting adventures, new friendships, and a firsthand look at attending our favorite classes. Here’s to two years of gameplay and many more mysteries to solve.

Will you be designing a costume to enter in the contest? Let us know in the comments below!

REVEALS OVER 35 BILLION MINUTES OF GAMEPLAY

Los Angeles, April 22, 2020 - Mobile game developer Jam City salutes the second anniversary of award-winning Harry Potter: Hogwarts Mystery by revealing players have cumulatively logged over 35 billion minutes of game play [sic] since its launch in April 2018! With that, spellbound fans who participate in iconic rites of passage at Hogwarts have played 50 million Quidditch matches, [have] cast 2 billion spells and have taken over 2 million OWL exams.

Licensed by Warner Bros. Interactive Entertainment and published under the Portkey Games label, Harry Potter: Hogwarts Mystery quickly soared to the top of the charts, becoming the #1 most downloaded mobile game in over 40 countries, including [the] U.S. and Canada. Now entering its [third] year, the immersive role-playing game (RPG) is celebrating this milestone occasion by offering players a once-in-a-lifetime chance to creatively contribute to their beloved wizarding world.

Beginning April 25, 2020, Harry Potter: Hogwarts Mystery is giving players and fans an opportunity to create their own costume design for the chance to see it come to life in the game! Fans will submit their original costume design that incorporates elements from all four Hogwarts Houses. From these submissions, three finalists will be chosen, with the winner voted on by fans. This design will then be immortalized into the mobile game in [f]all 2020. Stay tuned for official contest rules via social [media] channels.

As a further appreciation for fans, all players will be gifted a digital party onesie outfit paired with adorable House-specific slippers on April 25. The House [c]ommon [r]ooms will also be decked out in party decor and confetti for a truly fun-filled celebration!

Harry Potter: Hogwarts Mystery is the only mobile game where any fan can live their fantasy of attending Hogwarts School of Witchcraft and Wizardry. In this award-winning narrative RPG ([r]ole[-p]laying Game), players participate in the iconic rites of passage of life at the school, from being [S]orted in Year 1 to becoming a prefect in Year 5, while exploring the secrets of Hogwarts and its grounds. True to life in the [w]izarding [w]orld, players advance through their seven years of schooling at Hogwarts, attending classes, learning magical skills, and forming friendships and rivalries with other students, while investigating an original, unfolding mystery.