It’s been nearly a year since we found out that Daniel Radcliffe would be joining the cast of a new Unbreakable Kimmy Schmidt special, and we finally have a date, a title, and a first look at Radcliffe himself in his royal role!

Fans of the popular Netflix series about a girl adjusting to life in modern New York City after 15 years of being held captive in a bunker by a cult – not too unlike a boy held for 11 years in a cupboard under the stairs finding out he’s a wizard! – said bye to the titular character in January 2019 with the conclusion of the series’s fourth season. But show creators Tina Fey and Robert Carlock announced a few months later that an interactive special was in the cards.

We can now announce that Unbreakable Kimmy Schmidt: Kimmy vs. the Reverend will premiere on Netflix on May 12! Check out a teaser below, starring Radcliffe’s eyebrows.

Take it 10 seconds at a time ’til I’m back on May 12th! Fudge yeah! Did I mention you get to decide how the story ends? 🙌 pic.twitter.com/KLwqwGG6De

Core cast members Ellie Kemper (Kimmy), Tituss Burgess (Titus Andromedon), Jane Krakowski (Jacqueline White/Jacqueline Voorhees), and Carol Kane (Lillian Kaushtupper) will all be returning, as will Jon Hamm in the role of the Reverend, the man who previously held Kimmy captive. According to Entertainment Weekly, Kimmy, Titus, Jacqueline, and Lillian will find themselves on a mission to take the cult leader down before he can execute a new evil plan – and take him down quickly in order to get Kimmy to her wedding on time.

Enter Radcliffe as Prince Frederick Windsor, 12th in line to the British throne and Kimmy’s fiancé. 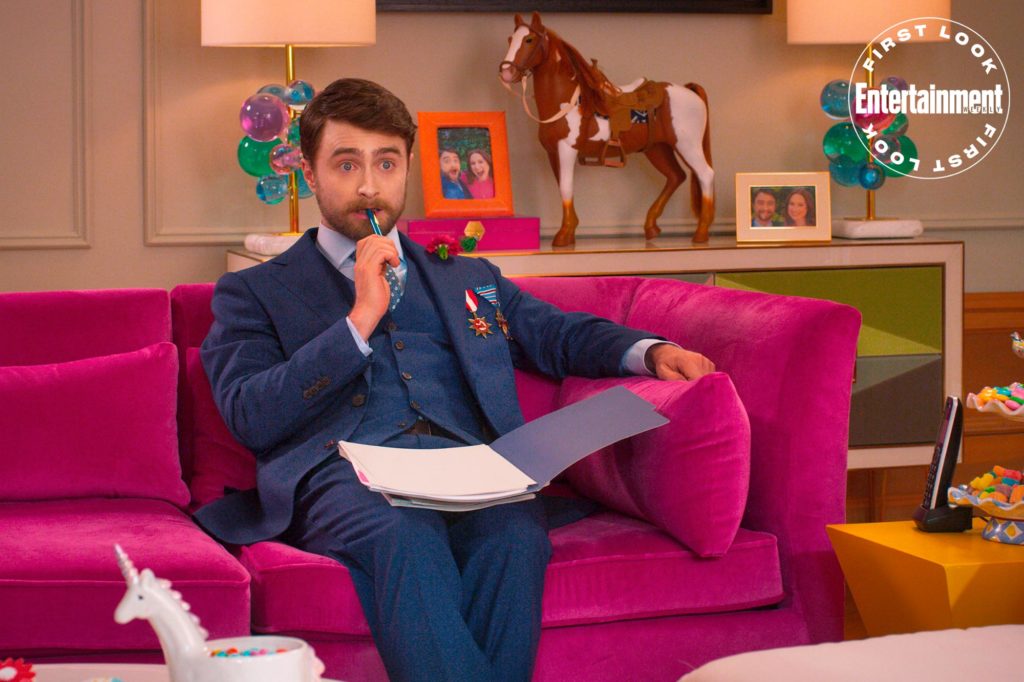 Radcliffe is developing a penchant for playing quirky royals after his role in Miracle Workers: Dark Ages, but he obviously needed to put the quirk factor in overdrive to keep up with the character of Kimmy. Considering EW says one of the pair’s subtle connections is Frederick’s ability to also hear Kimmy’s backpack, Jan, it sounds like that mission was accomplished. And while being 12th in line to the throne sounds about as close as the rest of us are ever going to get, Radcliffe says it’s a bit nearer than you’d think.

That sounds far away but is actually pretty f***ing close; I looked it up. Frederick’s had a very sheltered life, so he’s rather oblivious, but a very good-hearted human.

He also says that Frederick “absolutely loves Kimmy, and I hope people will be happy that she gets a prince – well, a prince with caveats.”

You will, in fact, be able to decide exactly what Kimmy gets, since the special is interactive! So be sure to tune in May 12, and do try to be a benevolent ruler when deciding the characters’ fates!