Hermione Puts the “Grange” in Granger

J.K. Rowling is well known to have put her classical language degree to good use in terms of the spells, character names, and allegories and allusions made throughout the series. But some of Rowling’s names may allude to something far more modern, coming from the Gilded Age of United States history. Hermione Granger’s last name may very well be in homage to the Grange movement. And even if that is not the case, since the Gilded Age is not discussed widely in popular circles, it is certainly a cool coincidence that the actions of the Grange correlate so well with the actions in Hermione’s life.

The Grange movement, also known as the Patrons of Husbandry, was formed in 1867 to advocate for farmers’ needs. The need for political advocacy was due to the fact that the time period was quite turbulent for farmers. The farmers in the southern United States were struggling with the aftermath of the Civil War. Farmers in other parts of the country were struggling because extreme weather events had damaged crops, so they were not able to sell their full yields. Unregulated railroad prices forced the farmers to spend a lot of money to ship their few crops. Farmers were stuck in a “perpetual debt cycle” (Bagget). And banks would foreclose on properties instead of working with farmers to refinance their loans. Being indebted to a wealthy person sounds a lot like a certain friend of Harry Potter’s… 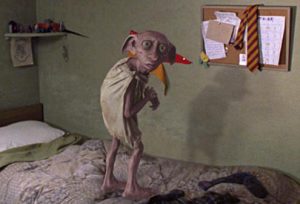 This was a time when farmers saw themselves as the true essence of America, living up to the ideals of the Founding Fathers by living out the Jeffersonian ideal of an America based on the yeoman farmer. They viewed their profession as integral to the fabric of America by being the one thing that every other person depended on since they all required farmers in order to be able to eat. As seen in the print below, they used the phrase “I feed you all” to reinforce their point. The Grange had some success in their advocacy efforts. Legislation passed in agrarian states that regulated the price of trains and grain elevators to be equitable to the farmers. These pieces of legislation became known throughout America as the “Granger Laws.”

And Granger brings us to Hermione and her last name. Hermione Granger is the epitome of campaigning for social justice just as the people in the Grange did. Readers see Hermione’s zeal for social justice from a very young age. Not many 13-year-olds would try and write a legal brief to show why a creature did not deserve to be executed as Hermione did with Buckbeak. Nor would many teens take that same energy and put it towards starting a grassroots campaign to end the harsh treatment of house-elves. Hermione’s largest grassroots effort in her teen years was putting in all the legwork to organize Dumbledore’s Army. Most of Hermione’s story arc is fighting injustices, occasionally throwing a punch or two along the way. 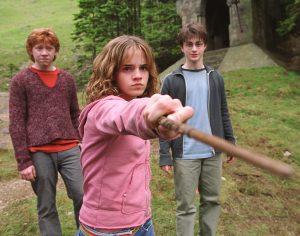 Though, as with Buckbeak’s trial, there were setbacks in the Grange movement. The Granger Laws were declared unconstitutional, but their goals were incorporated into the populist movement. Progressive era reforms brought their desires to fruition, including the precedent that the government should be involved in ensuring public welfare by regulating industries to protect the interest of the public. And to this day the Grange continues as the National Grange of the Order of Patrons of Husbandry, advocating for farmers and reducing food waste. While the Grange and Hermione had setbacks, their goals were achieved, and their agenda was prioritized whether it be through progressive reforms and continued advocacy or eventually becoming the Minister of Magic.

I’ll end my geeky history talk with this thought: Hermione is the feminine version of the name Hermes. Hermes is the messenger god, who brings messages to Hades from Olympus and vice versa. The term Grange is synonymous with what would now be considered an advocacy group. Ultimately, one meaning for Hermione’s name is “Messanger of an Advocacy Group.” If that’s not an apt descriptor for Hermione’s time at Hogwarts – whether it be her aims at freeing Buckbeak and house-elves or organizing students to learn defensive magic behind the professors’ backs – then I don’t know what is.

If you want to learn more about the Grange movement’s past click here or watch this video. To see what