The incredible graphic design team MinaLima has done it again! They’ve added a new print to their Magical Moments series. The first five pieces of art paid homage to Harry Potter and the Sorcerer’s Stone. The latest in the collection has moved on to the second film, Harry Potter and the Chamber of Secrets.

If you’re a fan of Dobby, then this next print in the series is definitely for you. Everyone’s favorite house-elf is the featured character in this beautiful design, which also includes mementos from some of Dobby’s most iconic scenes. 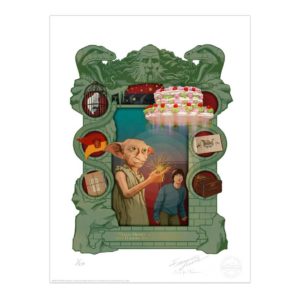 “A lot of the pieces feature graphic-props, because that’s our world, and we know that part of the universe helps tell the story.”

This is a print that you will have to look closely at to find all the hidden gems. Featured in this design is the cake that Dobby enchants inside of the Dursleys’ home, an image of Privet Drive, and several items from Harry’s Privet Drive bedroom – Hedwig in her cage, a Gryffindor flag, the photo album of pictures of Harry’s parents, Harry’s trunk, and the stack of letters from Harry’s friends that Dobby intercepted. Every magical item is surrounded by a slightly sinister frame inspired by the Chamber of Secrets.

This design is an interesting mix of sinister and happy – featuring both the dangerous Chamber and the comical moments inside of number four, Privet Drive. Here is what MinaLima had to say about the idea behind this Magical Moment:

One thing we set about doing was to create a common theme throughout all the prints. So in this new one, we created a frame that touches upon the Chamber of Secrets themes. So it’s slightly more sinister because of all the snakes…

We’re giving Dobby his moment to shine, because this scene is so brilliant. We always want to celebrate the comedic spirit that J.K. Rowling always peppers through the stories – so you’ve got dark snakes… but also collapsing cake. Cakes and snakes!

Have you seen the entire Magical Moments series? Which one is your favorite? Let us know in the comments below!