One of the most amusing scenes in Harry Potter and the Chamber of Secrets is arguably the mandrake repotting class, except maybe for Neville (Matthew Lewis), who ends up fainting. “Yes, well, just leave him there,” says Professor Sprout. While Miriam Margolyes delivered that line in character, it is a good indicator of her character in real life.

The BAFTA-winning actress is a real trooper, even in isolation. In a heartfelt interview with This Morning, her spirits were unwavering despite admitting that she missed her partner of 53 years, Heather Sutherland. Due to the pandemic, they have been separated: Margolyes is in London, Sutherland in Amsterdam. This is not so unusual given Margolyes has split her time between the United Kingdom and Australia since 1993 and she became a British-Australian dual citizen in 2013. She frequently tours her live shows Down Under, including her stage performance as the leading lady in Alan Bennett’s The Lady in the Van, the same role that Dame Maggie Smith brought to life on-screen. Now she is back as a lady in a van, albeit a friendlier one and in a more luxurious ride, with a whole new documentary about her travels from last year, Almost Australian. 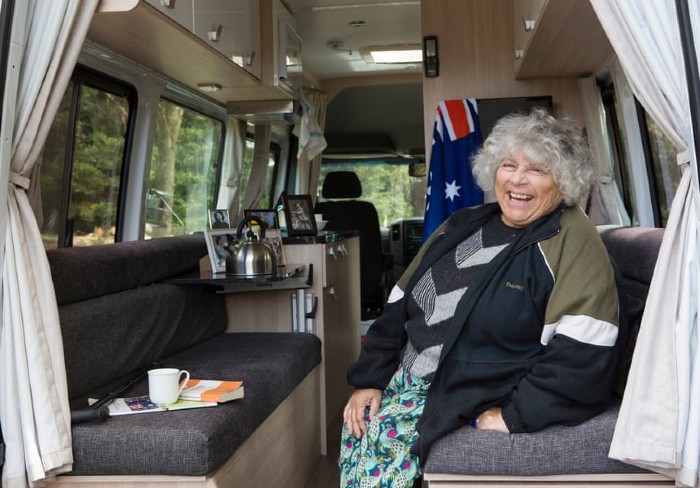 While the new series is a documentary, Margolyes told the Guardian that she wanted to make sure to let her personality shine through:

Whenever I make things, I don’t have an objectivity towards the people I speak to. I have to engage with them in a personal way. I’m not a journalist, I don’t have those skills, I only have my own personality to use as the bridge between me and the other people. And everything in the show is spontaneous. I don’t know who I am going to meet, or anything about them.

She also insisted that indigenous communities be properly featured in Almost Australian, saying, “I feel troubled by the relationship between white Australians and First Nations. I want it to be better.” She is certainly not one to filter herself or shy away from harsh realities. Check out the clip below of her tour around a woman’s off-grid RV.

Although Margolyes is struggling with some aspects of the lockdown, especially because she is such an avid traveler, she finds a way to keep in touch with her friends and her community, perhaps even a bit too much:

The phone keeps ringing. People who’ve never rung me on a landline before keep ringing. It drives me mental. I’ve been doing a lot of zooming and skyping. I attended a shiva by Zoom – it was very moving. There were 63 people on the screen, and they were able to share their memories of the lovely person who died. But you do feel exhausted by it all after a while. I am a gregarious, social kind of person – I like people and I like contact, but I want to choose when I get contact, and now I don’t get to choose when I speak to people. I’m going to turn off my phone.

Margolyes is also a keen activist and voiced her worries to the Guardian about politics both in the UK and in Australia. With her new documentary, she has a chance to educate and comment on the latter, at least. “I want [Australia] to be better,” she says. We can’t wait to see the country through Miriam Margolyes’s eyes.

Almost Australian premieres on May 19, on ABC (Australian Broadcasting Corporation) and iView.