Review and Giveaway: Win a Paperback Copy of “Harry Potter: The Wand Collection” from Insight Editions!

First released in hardcover in 2017, Harry Potter: The Wand Collection, written by Monique Peterson and published by Insight Editions, is a compilation of everything you’ve ever wanted to know about the wands in the Harry Potter films, and it’s about to become available in paperback.

Even though personally, I’ve never been that excited about the wands in the Potter films, feeling that they’re much more detailed and elaborate than the wands I pictured in my head, this book definitely makes me admire the craftsmanship that went into designing such unique magical tools for each character, especially when viewers get only fleeting glances at most of them. 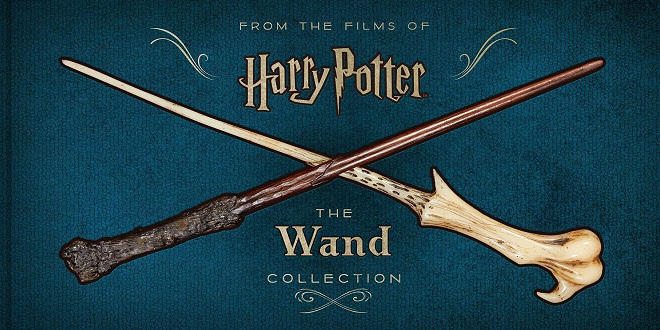 The first thing that’s noticeable about The Wand Collection is its unique dimensions. At six inches vertically by 12 inches horizontally, the book physically emulates its subject matter and is sure to stand out on your bookshelf.

The book opens with some general information about wands in the wizarding world, wandmakers such as Ollivander, and the development of wands in the Harry Potter films. Head prop modeler Pierre Bohanna was responsible for bringing wands to the screen, while choreographer Paul Harris pioneered the art of wand combat choreography for Harry Potter and the Order of the Phoenix. These pages also include some pretty nifty concept art – there are wand cross-sections and everything!

Spread showing wand concept art and “What Is a Wand?”

The book then proceeds to showcase the wands of every major character in the series, 58 in total, including students, professors, members of the Order of the Phoenix, and Death Eaters, with an image of each wand alongside the character who wields it, the description of the wand, and some key moments the character is seen using their wand in the films. Many descriptions also include quotes from the actors about their experiences on set.

The text, while generally presenting information that fans already know, certainly drew my attention to some interesting facts. For instance, the handle of Lupin’s wand has a bulbous tip, evoking the moon, while the handle of Slughorn’s wand ends in the shape of the antennae of a slug. Meanwhile, Padma Patil’s and Cedric Diggory’s wands are in fact not quite unique because they were made from the same mold, though different in color.

I was also excited to find a few fold-out pages, such as for Hagrid’s umbrella – appropriate since it’s an instrument that’s a bit longer than most wands.

At the back, there’s even an index, displaying all the wands together and detailing the length of each (the lengths in the films being, of course, much longer than in the books).

Spread showing the index of wands

This book would be great for collectors of Harry Potter memorabilia or as a gift for any budding Potter enthusiasts in your life. Harry Potter: The Wand Collection, paperback edition, is available on May 12, 2020.

Ready for a wand-erful Potter book to add to your collection? We’re giving away one paperback copy of Harry Potter: The Wand Collection from Insight Editions. Our contest to win a copy is open worldwide, starting today, May 3, running through May 17 at 11:59 p.m. ET. Enter through the Rafflecopter below. Winners will be contacted via email after May 17, so make sure to check your junk or spam folders just in case our e-owl goes astray. All winners must respond within 24 hours, or another winner may be chosen.

A copy of Harry Potter: The Wand Collection was provided by Insight Editions. All opinions belong to the reviewer.