We reported previously on Imelda Staunton’s lockdown days with husband and star of Downton Abbey Jim Carter. Turns out, she has not been resting on her laurels. When the entertainment industry went dark in mid-March, creatives were faced with a dilemma: Can we keep making new productions, and if yes, how? BBC One’s new take on Talking Heads, renowned playwright Alan Bennett’s series of monologues, seems to have got around this conundrum. Despite the hindrance of social distancing rules, the series is about to hit television screens, and it has in store a full-length episode featuring Staunton, who played Dolores Umbridge in Harry Potter and the Order of the Phoenix.

According to Deadline Hollywood, the series premieres on June 23, and it features such talents as Jodie Comer (Killing Eve, Star Wars: Episode IX), Harriet Walter (Sense and Sensibility, Star Wars: Episode VIII), Kristin Scott Thomas (The English Patient, Four Weddings and a Funeral), Maxine Peake (The Theory of Everything, Shameless), Rochenda Sandall (Line of Duty, Black Mirror: Bandersnatch), Lucian Msamati (Game of Thrones, Luther), Monica Dolan (The Casual Vacancy, Pride), Lesley Manville (Phantom Thread, Maleficent), and more. Staunton plays Irene in her episode, “A Lady of Letters,” the story of an opinionated woman whose own pen leads her into trouble and eventual, unexpected self-reflection. Here’s the first look of Staunton in character. 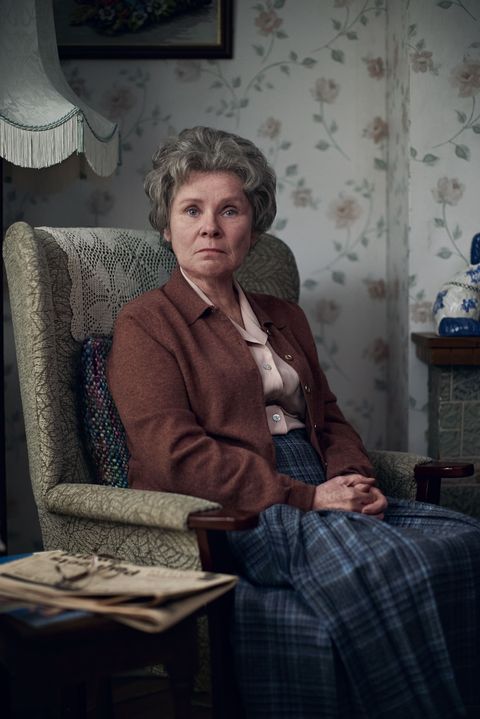 The production team behind the series had to operate under very unusual circumstances due to mandatory social distancing. Producer Nicholas Hytner told the Times about the arduous process of working around the restrictions:

It was all completely improvised. How do you work when you can’t meet or share things with people and hand things over?

Numerous Zoom meetings, light equipment that is easy to operate by one person, and long “fisher booms” helped. However, even in the case of monologues, there is a whole host of jobs that are virtually impossible to carry out without close human contact.

The cast and crew were very inventive throughout production, particularly when it became clear that Staunton needed a wig to play her character. Not to be beaten by the lockdown, makeup artist Naomi Donne acquired some wigs, sanitized them, and drove to Staunton’s house. Cut to the pair throwing wigs at each other in Staunton’s front garden (at least six feet apart, of course) and an hour later, they found the perfect wig. How much easier would this have been with some Levitation Charms?

Hands-on styling and costume rehearsals were also replaced by remote consultations, though Lesley Manville, who stars in the episode titled “Bed Among the Lentils,” had no issue with it since she likes to do her own hair and makeup. Her monologue was originally performed by Dame Maggie Smith (Minerva McGonagall), in 1988. If you want to get 40 minutes of goosebumps at her brilliance, watch the video below. She tells the tale of Susan, a vicar’s alcoholic wife, who finds unlikely passion amid her disillusionment with her life, her community, and her faith.

While Talking Heads was made possible in spite of less than favorable conditions, the creators are not optimistic about carrying this on when it comes to other productions. Zac Nicholson, the director of photography, shared, “It showed it was possible to work within a contained environment. But it didn’t give us a clue how you solve the problem.” Luckily, the themes in Bennett’s series are very relevant, but not everything can be stripped down to monologues. Indeed, like many other productions, filming on The Crown has been completely put on hold. While we wait to see it, particularly the last season, in which Staunton is set to play Queen Elizabeth II, why not tune in to see her in Talking Heads or her latest appearances that were shot before social distancing? June is also Pride Month and therefore the best time to get your Staunton fix as a feisty Welsh protester for miners and LGBTQ+ rights in Pride.