We here at the Dirigible Plum are getting into yoga. It has been quite fun. We have mastered Legs Behind the Head pose, Happy Baby pose, and even One-Legged Pigeon. It is now time to take it to the next level. We feel that, even though we have little to no formal training and have been practicing yoga for barely three months, we are fully qualified to encourage our readers to try advanced yoga poses that we are sure (read: guessing) our favorite witches and wizards regularly do. We will start off easy and gradually build up to some more difficult positions. Feel free to practice along with us.*

*Disclaimer: DO NOT practice along with us. These are lacklusterly researched, barely understood, extremely difficult yoga poses. DO NOT attempt these without fully preparing and in the supervision of a professional. We cannot afford any more lawsuits – we are still paying off the last one regarding raw plants you can pick and eat.

Admittedly, this pose looks hilarious. It also seems stupid, but don’t let first impressions fool you. Calming the mind and nervous system, Relaxed Child’s pose serves to make one feel safe and well stretched along the spine. Luna suggests using this pose when you have too many Wrackspurts in the brain.

Though it initially looks underwhelming, this pose cultivates fiery power and is a nod to a great warrior who went through tragic circumstances. Ron uses Warrior II pose to help stretch the hips, groin, and shoulders as well as promote balance and stability.

Could this represent anyone else? I don’t think so. Sirius is and does Downward-Facing Dog pose regularly. He recommends this pose to calm the brain and relieve stress and depression. It is an all-over, rejuvenating stretch for the busy wizard on the go.

Toning the abdominal wall and aiding lower back pain, Kingsley practices Crow pose in between meetings at the Ministry. He believes it fosters his inner focus and concentration on the present. Crow pose is also a symbol of justice and longevity.

The benefits of Headstand pose are many: relieving stress, improving blood flow to the eyes, head, and scalp, and sharpening concentration and the senses. If this pose had an ambassador, it would be Remus Lupin. He does this pose once a month to revitalize himself.

Apart from a good knee stretch, Reclining Hero pose can call up emotions that have been locked down, cultivating a willingness to be present. Everyone needs to unbottle their emotions, but we feel that Cornelius Fudge could use this pose the most. Perhaps it will also help him to unbottle his senses too.

Hermione Granger: What can’t she do? Handstand Scorpion is one of the more difficult yoga poses, giving a full front body stretch, encouraging muscular endurance and stamina, and – according to beyogi.com – adding “all-around badassery.” Hermione mastered this pose early on in her Yogi journey. Oh, and by the way, it’s Scoooorpion, not Scorpioooon.

Uniting mind, body, and spirit unanimously, the level of difficulty here is definitely not for the faint-hearted wizard. This pose increases memory, releases tension in the heart, and is supposedly a natural treatment for hair loss. Dumbledore’s luscious, long beard is a dead giveaway of his proficiency in this particular Yogi style.

Apart from looking incredibly difficult, Formidable Face pose also looks like you are giving an extra special bow. If anyone were this devoted, it would be Bellatrix – strengthening her feet kissing pose for Voldemort. This pose also helps to reduce headaches and stress, so we recommend she do it more and stop being such a b#@ch.

Voldemort – Destroyer of the Universe Pose

Seemingly contradictory in name, Destroyer of the Universe pose is dedicated to Hindu Lord Shiva and has its roots in a cyclical aspect of creation and destruction. It is recommended for people with high blood pressure, infertility, insomnia, and sinusitis. Ever heard Voldemort sniffle? I didn’t think so.

Improving a sense of balance and coordination that would serve Harry well on a broom, One Handed Tree pose also increases focus and ability to concentrate in all areas of one’s life. Harry took a while to master this pose, but as soon as he did, he noticed a sense of clear-headedness that would have been useful in Book 5. 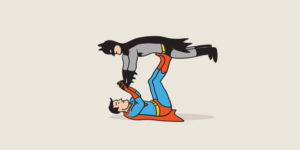 Fred and George don’t do yoga, but if they did, it would look like this.

So how do you feel? Rejuvenated? Energized? Ready to take on the world? Us too. Send in your attempts at these poses. We’d love to see them.*

*Disclaimer: DO NOT send in your attempts. DO NOT attempt these poses. You will hurt yourself.