Ten Years of Magic: A Flashback to the Opening of the Wizarding World of Harry Potter

As Harry Potter fans will know, the Wizarding World of Harry Potter opened at Universal Orlando Resort on June 18, 2010. This year marks its tenth anniversary, and many who were there that day can probably feel the sweet sting of nostalgia. Those were indeed the good old days.

The Wizarding World of Harry Potter was, and still is, wildly successful and opened a lot of new doors for the theme park industry. It became the inspiration for many big-budget and thematically immersive attractions. Its opening led to record attendance and revenue, which makes it one of the most remarkable moments in theme park history.

To celebrate the anniversary of the opening of the Wizarding World of Harry Potter, Theme Park Insider has put together an oral history of people who were at the opening on June 18, 2010. Many people’s accounts of the day’s events were recorded, and the golden thread that runs through all the stories is, well, magical. It was an exciting and memorable day for those who were there, and clearly, a day that will be remembered by many for the rest of their lives. Ric Florell, Executive Vice President of Resort Revenue Operations at Universal Orlando Resort, remembers how early he had to be there, and how many people showed up.

As I came driving around the corner to our parking garages here at Universal Orlando Resort, there was this extremely long line of cars waiting to get in – at five o’clock in the morning. And that was the first indication to me that this is going to be a pretty popular day with our guests.

Alan Gilmore, the art director who worked on the park design and the Potter films, recounts how amazing it was to re-create the wizarding world.

It’s taking the movies and the stories and bringing them to life. It was an amazing journey to do that, to take a facsimile of our film designs and then bring that to Orlando and make it a real place where you could walk around. It was exactly what I expected, and I have to say I was very confident that people would love it.

Robert Niles, the editor of Theme Park Insider, remembers the banner Universal had draped over the east entrance of the park. It looked like a Hogwarts acceptance letter. 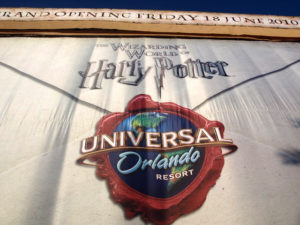 Niles also recalls how big the crowd was.

The first clue that registered for me that this crowd was much, much larger came when Daniel Radcliffe said, ‘Hello to everyone in the back!’ during the opening ceremony. There’s this roar of response in the distance, which just rolls on as a wave of sound for several seconds.

You can witness what Niles describes in this video:

Alyson Lundell, Sr. Director of Public Relations at the Resort, has a fond memory of Daniel Radcliffe interacting with some of the kids attending that day.

Watching Daniel Radcliffe grab a child’s hand and walk that child into the land for the very first time and the child’s eyes are wide open in disbelief – you know it was really special to witness and to see how genuine both the film talent and the guests were feeling about what we had created.

Daniel Radcliffe recalls how much detail was put into the making of the Wizarding World of Harry Potter and how amazing it was to see how carefully everything was planned out.

When we were filming it [the scenes for Forbidden Journey], we were very much aware of the depth, the attention to detail — and the care that was taken over the building of this place is equal to what we do for the films. That’s what’s been very gratifying to come here and see. Being so involved in it, it is really nice to see that it is in such safe hands. It’s very much authentic, and wonderful.

Were you at the opening ten years ago? Share your memories in the comments.